Russian President Vladimir Putin reiterated his false framing of Russia’s unprovoked invasion of Ukraine as a defensive operation to protect Russia on September 1. During a meeting with schoolchildren in Kaliningrad, Putin stated that the purpose of the “special military operation” is to eliminate the “anti-Russian enclave” that is forming in Ukraine and is an existential threat to the Russian state.[1] Putin similarly invoked the concept of an “anti-Russia” in his February 24 speech declaring a “special operation” in Ukraine.[2] Putin’s reiteration of an “anti-Russian” entity that must be defeated militarily to defend Russia reaffirms his maximalist intentions for Ukraine and is likely intended to set the information conditions to call for further Russian efforts and force generation going into the fall and winter of this year.

Russian milbloggers continued attempts to claim that Ukraine’s counteroffensive in the south has already failed. Igor Girkin, a Russian nationalist and former commander of militants in the 2014 fighting in Donbas, stated that Ukrainian forces are continuing to attack after the “failure of the first attack”—falsely portraying ongoing Ukrainian operations as separate attacks after an initial failure—and reiterated the common Russian narrative that what he claims are Ukraine’s “Western handlers” pushed Ukraine to conduct a counteroffensive.[3] Girkin additionally stated that Ukraine’s Western partners poorly planned for the counteroffensive, underestimated Russian capabilities and assumed Russians are incompetent, and principally accounted for political—not military—considerations.[4] One milblogger stated that Ukraine’s defeat in the south will be the strongest psychological blow to Kyiv and that this failure will have a continued long-term psychological effect on Ukraine’s morale.[5] The Russian milbloggers are increasingly centrally describing Ukrainian attacks as tactless and “suicidal” rushes.[6]

As ISW has reported, military operations on the scale of the ongoing Ukrainian counteroffensive do not succeed or fail in a day or a week.[7] Ukrainians and the West should not fall for Russian information operations portraying the Ukrainian counteroffensive in Kherson Oblast as having failed almost instantly or that depict Ukraine as a helpless puppet of Western masters for launching it at this time.

The Ukrainian General Staff stated that Russian President Vladimir Putin has extended the deadline for Russian forces to capture Donetsk Oblast from August 31 to the still highly unlikely target date of September 15, and Russian forces are conducting several redeployments to meet this goal.[8] Deputy Chief of the Ukrainian Main Operational Department Oleksiy Gromov stated that Russian forces are regrouping elements of the Central Military District (CMD) operating in the Luhansk-Donetsk Oblast directions in an effort to increase the number of troops west of Donetsk City.[9] Gromov added that Russian forces deployed two battalion tactical groups (BTGs) in the direction of the western Zaporizhia Oblast frontline from Belgorod Oblast, which he noted might support resumed Russian offensive operations in Donbas. Gromov stated that Russian military officials are continuing to form the 3rd Army Corps to deploy to Donetsk Oblast, also likely to resume offensive operations in the Donetsk operational area.[11] Gromov noted that it is unclear if all mobilized 3rd Army Corps servicemen have undergone military training.[12] Russian forces also reportedly introduced one BTG each to the Slovyansk and Mykolaiv directions.[13] RFE/RL’s footage also shows that Russian forces are continuing to react to Ukrainian counteroffensive in Kherson Oblast by consistently transferring military convoys to southern Ukrainian via the Kerch Strait Bridge.[14] These Russian deployments are likely intended to set conditions for a revised operation to capture Donetsk Oblast, but Russian forces remain highly unlikely to make the progress necessary to capture the Oblast by September 15.

The Kremlin is likely seeking to capitalize on the significance of seizing areas around Donetsk City that have been contested since 2014 to boost the morale of Russian and proxy forces. Russian forces have not been successful in advancing toward Siversk or capturing the E40 highway to Slovyansk-Bakhmut since the fall of Lysychansk and are likely experiencing challenges incentivizing Luhansk People’s Republic (LNR) elements to continue fighting to reach the Donetsk Oblast administrative borders.[15] Russian forces had minor territorial gains around Avdiivka, which have generated positive chatter among the Donetsk People’s Republic (DNR) fighters in early August after which the advances stalled west of Donetsk City.[16] 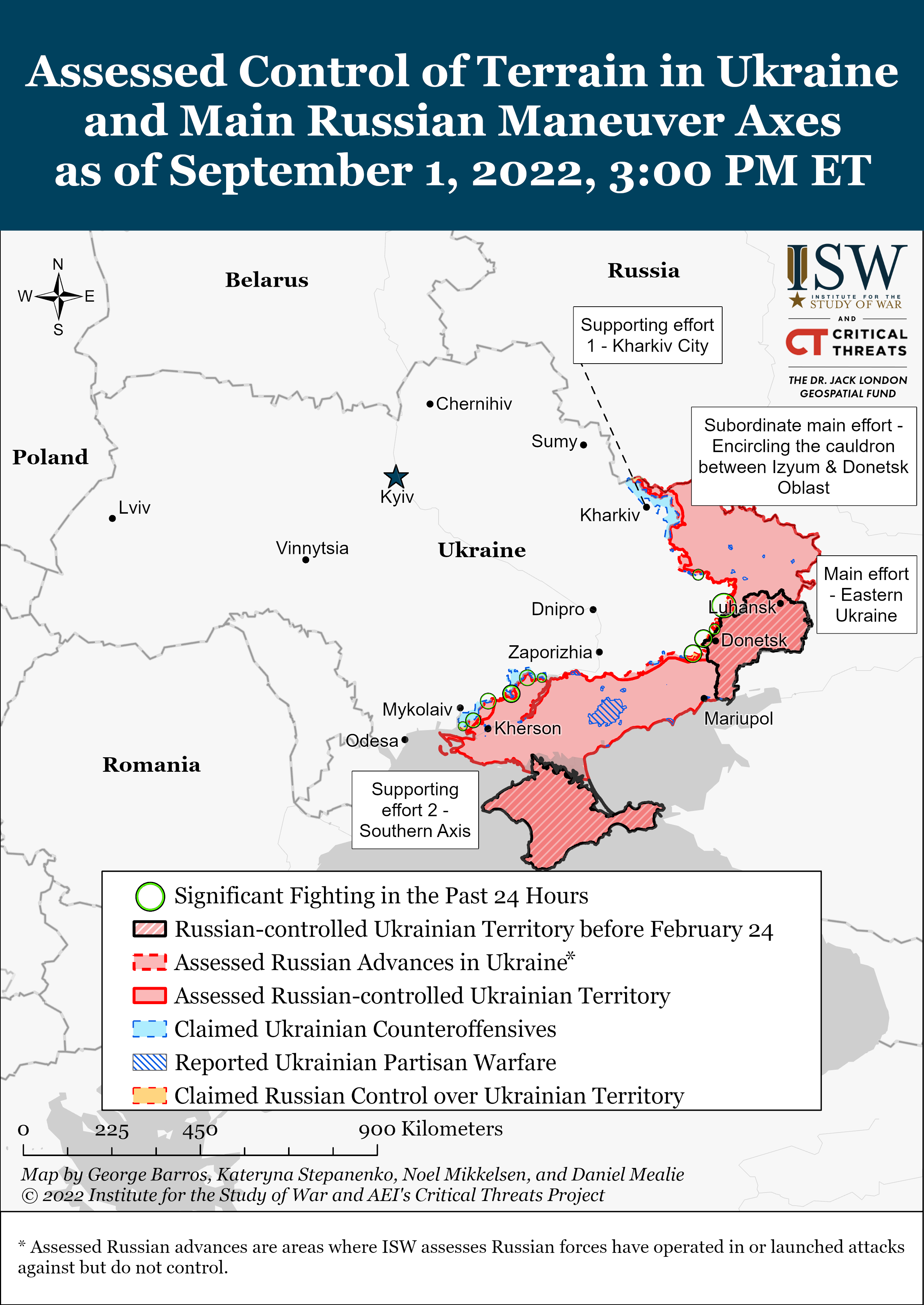 Ukrainian military officials reiterated that Ukrainian forces continued targeting Russian logistics and reinforcements and maintained operational silence on the progress of the Ukrainian counteroffensive in southern Ukraine on September 1. Deputy Chief of the Ukrainian Main Operational Department Oleksiy Gromov stated that Russian losses are currently concentrated due to a series of Ukrainian missile, air, UAV, and artillery strikes on Russian command posts, positions, and ammunition depots between August 29 and August 31.[17]

Ukrainian forces likely continued to strike Russian ground lines of communication (GLOCs) and key positions throughout central Kherson Oblast on September 1. Local Ukrainian civilians reported hearing explosions and witnessing active air defense systems in Nova Kakhovka and Kakhovka (approximately 12km northeast of Nova Kakhovka), and social media footage showed new Ukrainian strikes against the Antonivsky Bridge.[23] The Russian Defense Ministry claimed that Russian forces shot down Ukrainian AGM-88 HARM missiles over Antonivsky Bridge.[24] A Ukrainian Telegram channel reported that a Ukrainian missile hit an unspecified target in Oleshky (about 9km southeast of Kherson City on the left bank of the Dnipro River), and that Russian air defense systems shot down a Ukrainian missile over Kalanchak (about 67km due south of Kherson City).[25] A Ukrainian Telegram channel also published footage of a reported destroyed Russian military base in Shyroka Balka, about 35km west of Kherson City.[26] Geolocated footage also showed the destruction of a Russian military base in the former barracks of the Ukrainian National Guards in Kherson City, likely destroyed during a Ukrainian strike on August 29.[27] Ukrainian Telegram channels have also reported Russian forces transporting more barges to Nova Kakhovka, likely in attempt to facilitate cross-river transportation in the area.[28]

Russian milbloggers reported that Ukrainian forces continued attacking in at least four directions in Kherson Oblast, but these claims remain largely unverifiable. Various milbloggers claimed that fighting continued west of Vysokopillya south of the Kherson-Dnipropetrovsk Oblast border, east and northeast of the Ukrainian bridgehead over the Inhulets River, around Snihurivka about 65km east of Mykolaiv City, and north of Kherson City.

Russian forces conducted a limited ground attack northwest of Slovyansk on September 1. The Ukrainian General Staff reported that Russian troops attempted to advance toward Dolyna, 18km northwest of Slovyansk along the E40 highway.[41] Russian forces additionally continued routine shelling, airstrikes, and aerial reconnaissance along the Izyum-Slovyansk line and near the Kharkiv-Donetsk Oblast border.[42] Russian forces did not conduct any confirmed ground attacks toward Siversk on September 1 and continued routine artillery strikes on Siversk and surrounding settlements.[43] 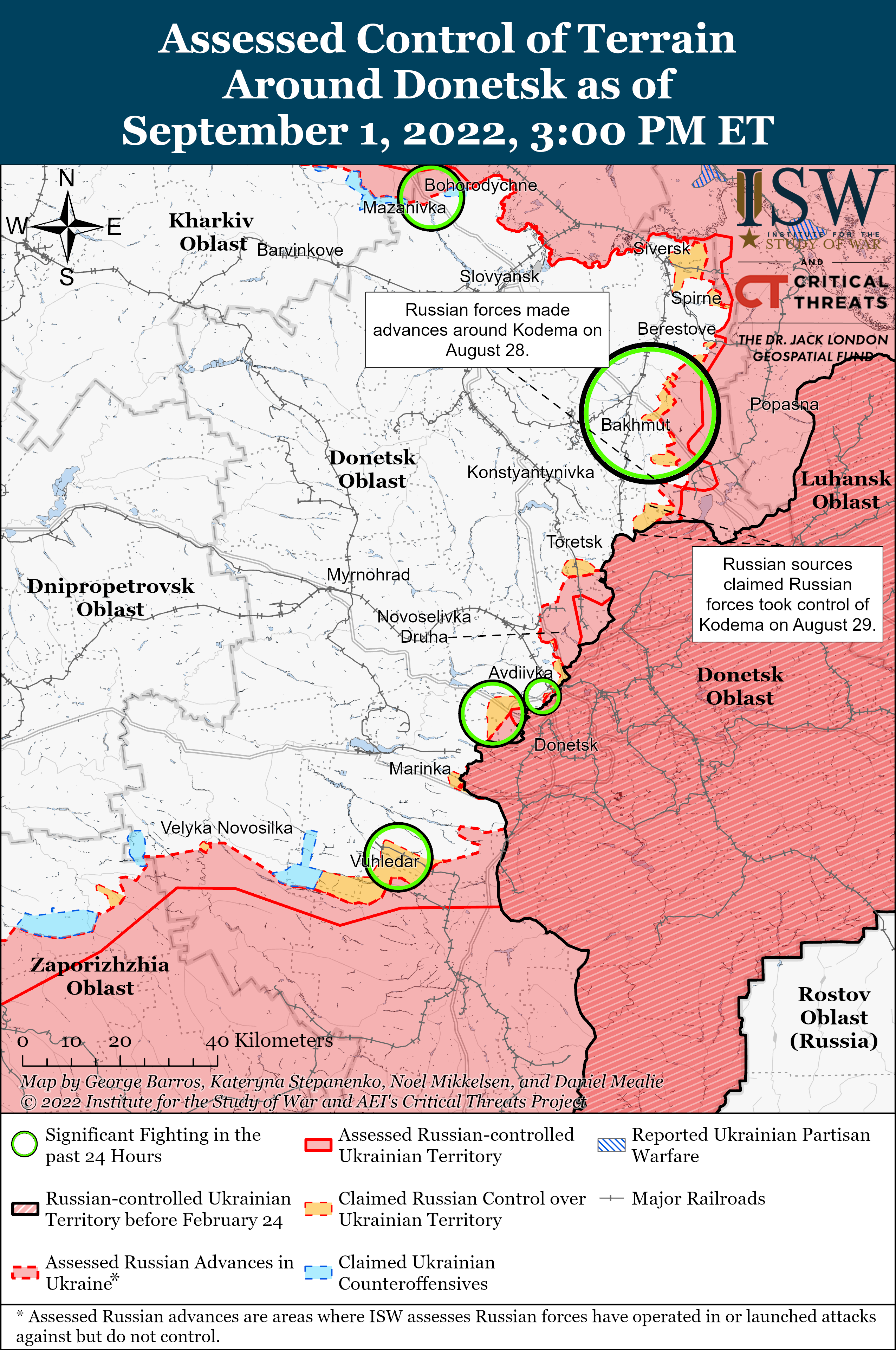 Russian forces conducted limited ground attacks along the western outskirts of Donetsk City on September 1. The Ukrainian General Staff reported that Russian troops attempted to improve their positions around Pervomaiske, Nevelske, and Optyne, which all lie within 15km of the northwestern corner of Donetsk City.[46] Russian forces also continued routine air and artillery strikes along the Avdiivka-Donetsk City frontline.[47]

The Russian Defense Ministry (MOD) claimed that Russian forces repelled a Ukrainian offensive near Ruski Tyshky, approximately 20km northeast of Kharkiv City, on September 1. ISW is not able to independently verify this claim, however. 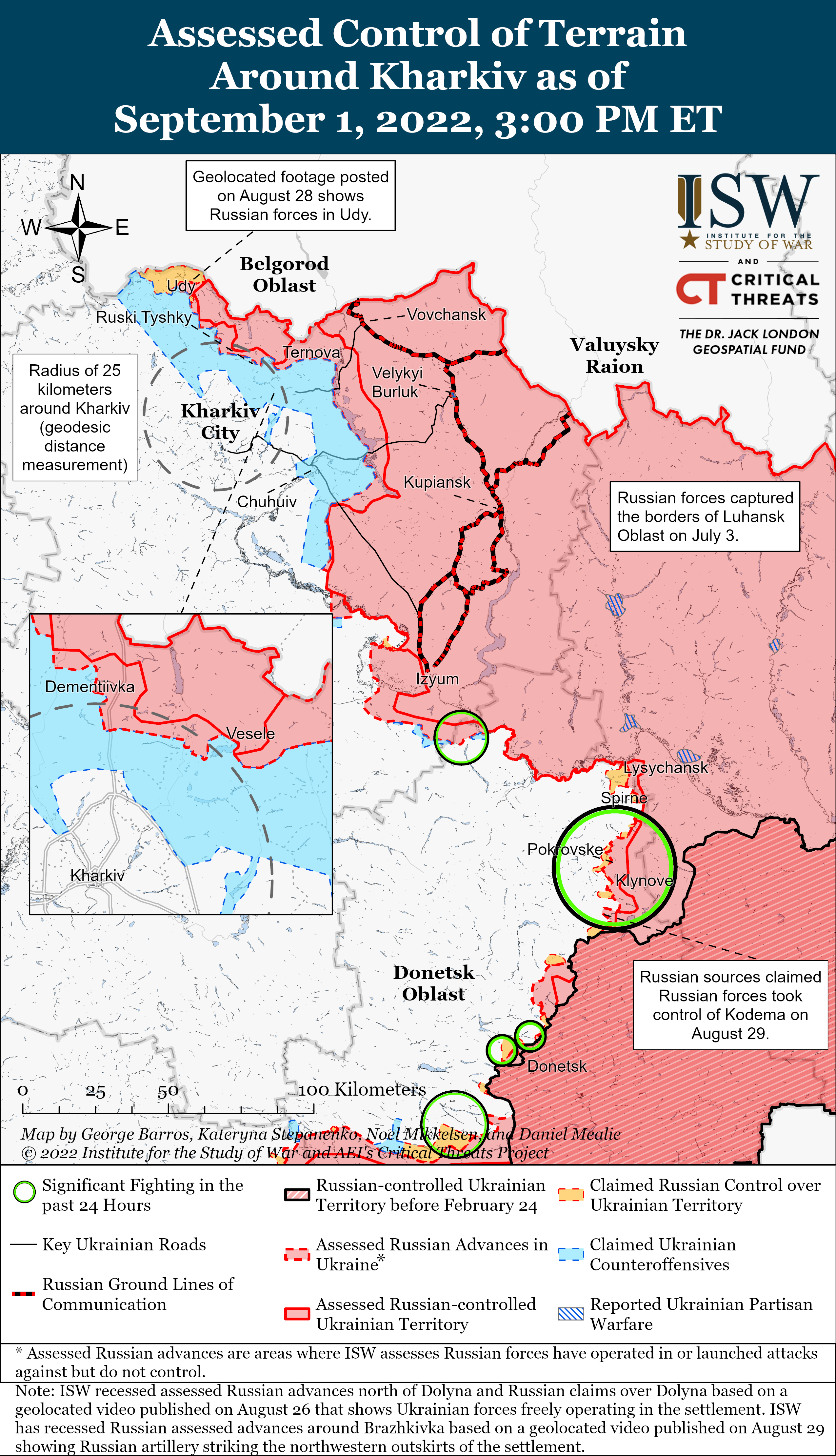 Russian forces did not conduct offensive operations in Kherson or Zaporizhia Oblasts and continued routine shelling along the line of contact.[52] The Ukrainian Southern Operational Command reported that Russian forces have intensified their airstrikes in Kherson Oblast and remotely mined their positions to defend themselves against Ukrainian advances.[53] Russian forces launched missile strikes against Odesa Oblast and continued to fire MLRS systems and heavy artillery at Nikopol and Kryvyi Rih Raions. Satellite imagery reportedly showed Russian forces moving another battery of S-400 air defense system near Belbek, Crimea.[54] Russian forces are likely continuing to undertake measures to strengthen air defenses in Crimea. 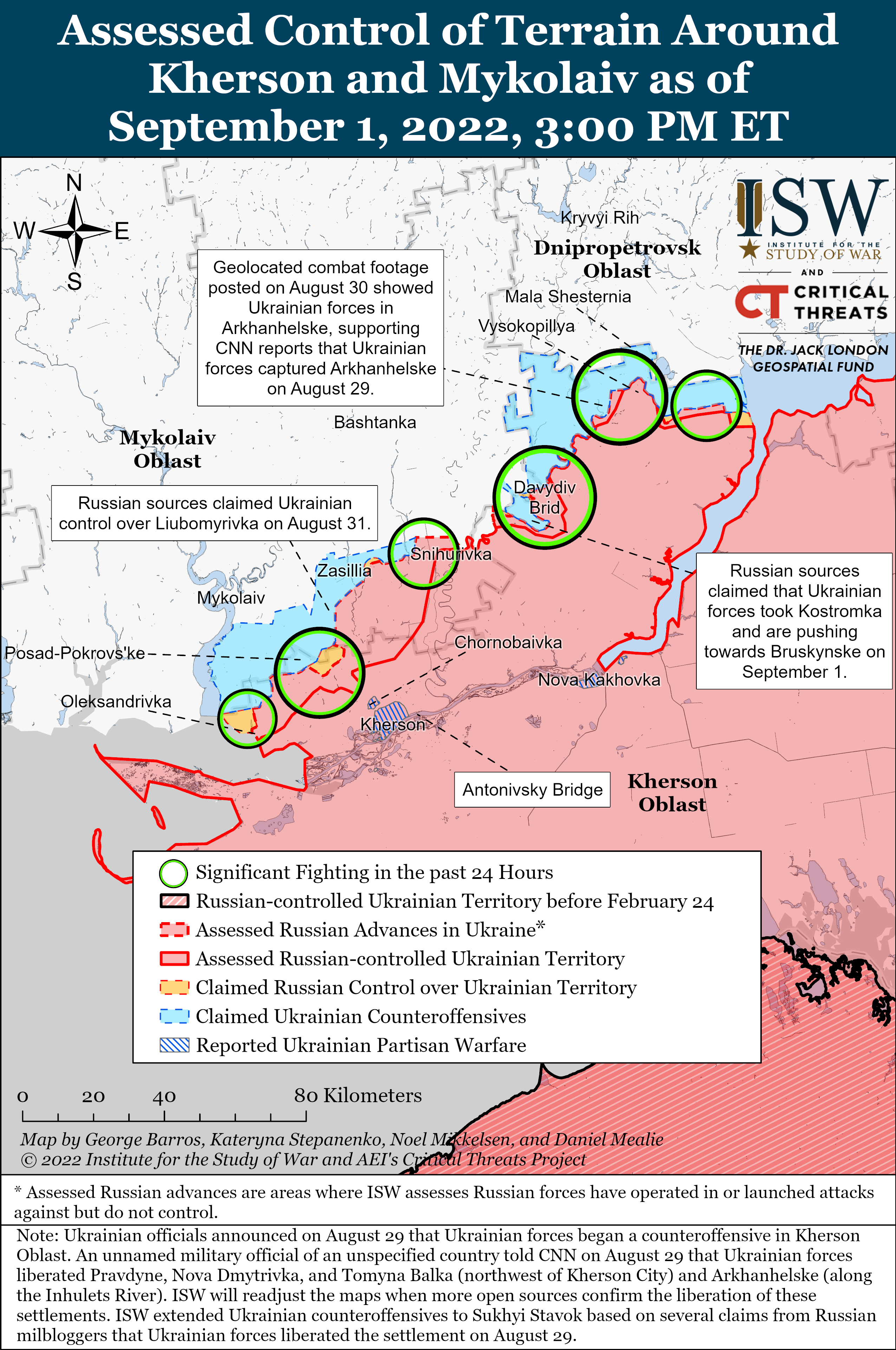 Russian military authorities continued forming and deploying volunteer units to Ukraine to compensate for personnel losses in Ukraine. A local veterans’ organization in Buryatia announced it generated an additional 30 volunteers to fight in Ukraine on September 1.[57] Deputy Chief of the Ukrainian Main Operational Department Oleksiy Gromov stated that Russian military authorities decided to disband the 31st Separate Airborne Assault Brigade and the 22nd Separate Special Purpose Brigade due to significant losses, claiming that less than 20% of personnel in each brigade survived operations in Ukraine.[58] Both brigades fought in battles where Russian forces suffered heavy attrition. Elements of the Russian 31st Separate Airborne Assault Brigade participated in combat operations in Hostomel, Kyiv Oblast, and in Severodonetsk, Luhansk Oblast.[59] Elements of the 22nd Separate Special Purpose brigade fought in Mariupol, Donetsk Oblast.[60]

CNN amplified two anonymous US officials’ claims on August 31 that Russia is facing “severe” shortages of military personnel in Ukraine and is searching for new ways to generate personnel for battle. The report amplified one unidentified official’s claims that the Russian MoD is attempting to recruit contract service members to compensate for personnel losses by “compelling wounded soldiers to reenter combat, acquiring personnel from private security companies, and paying bonuses to conscripts.”[61] The officials also noted that the US has “credible reporting” that Russia's MOD is “likely to begin” recruiting convicted criminals in Ukraine “in exchange for pardons and financial compensation.”[62]

Ukrainian sources are increasingly reporting that Russian occupation authorities are likely acknowledging their own inability to hold large-scale referenda in occupied Ukrainian territories due to Russian military failures to capture desired territory and the pressure of local resistance within occupied territories. The Ukrainian Resistance Center stated on September 1 that the Kremlin anticipated holding the entirety of Donetsk, Luhansk, Kherson, and Zaporizhia Oblasts by the summer of 2022, and that the Russian military’s inability to take control of these territories has undermined the Kremlin’s prospects at staging large-scale referenda across occupied regions.[63] The Resistance Center added that Russian authorities will continue to propagate the concept of large-scale referenda across the information space but that occupation officials fundamentally understand that even staged voting may not occur at all due to the tandem effects of Russian military failings and pressure levied by Ukrainian partisan and civil resistance.[64] ISW has previously assessed that Russian occupation authorities are unlikely to be able to stage sham referenda in occupied regions by the supposed early September deadline.