Russia’s use of Iranian-made drones is not generating asymmetric effects the way the Ukrainian use of US-provided HIMARS systems has done and is unlikely to affect the course of the war significantly. The deputy chief of the Main Operational Department of the Ukrainian General Staff, Brigadier General Oleksiy Hromov, stated on October 6 that Russian forces have used a total of 86 Iranian Shahed-136 drones against Ukraine, 60% of which Ukrainian forces have already destroyed.[i] As ISW reported yesterday, Russian forces do not appear to be focusing these drones on asymmetric nodes near the battlefield. They have used many drones against civilian targets in rear areas, likely hoping to generate nonlinear effects through terror. Such efforts are not succeeding. Ukrainian Air Force Command Spokesperson Yuri Ignat stated that the Russian army is increasingly using the Iranian-made drones to conserve its stock of high-precision missiles.[ii] Russian forces have likely used a non-trivial percentage of the Shahed-136 supply so far if the claims of an anonymous US intelligence official at the end of August were correct that Iran would likely provide ”hundreds” of drones to Russia.[iii]

The Wagner Private Military Company announced the creation of its own private Telegram channel on October 6, indicating that Wagner financier Yevgeny Prigozhin may want a voice that is clearly his own to compete with milbloggers and possibly Chechen warlord Ramzan Kadyrov, who all have their own Telegram channels. A Telegram channel affiliated with Prigozhin shared the invitation to the Wagner channel, “Peacekeeper.” The Russian-language invitation reads “👹We arrived from Hell. We are WAGNER - our business is death, and business is going well.”[iv] In addition to Peacekeeper, the channel suggested that followers subscribe to the “Novorossiya Z Project,” another private channel. The creation of a group for Wagner to share “uncensored materials from the front” may be in part a recruitment tool but is likely also an attempt to establish a formal means for Prigozhin and his allies to directly influence the information space in much the same way that Kadyrov and the Russian nationalist milbloggers use Telegram. 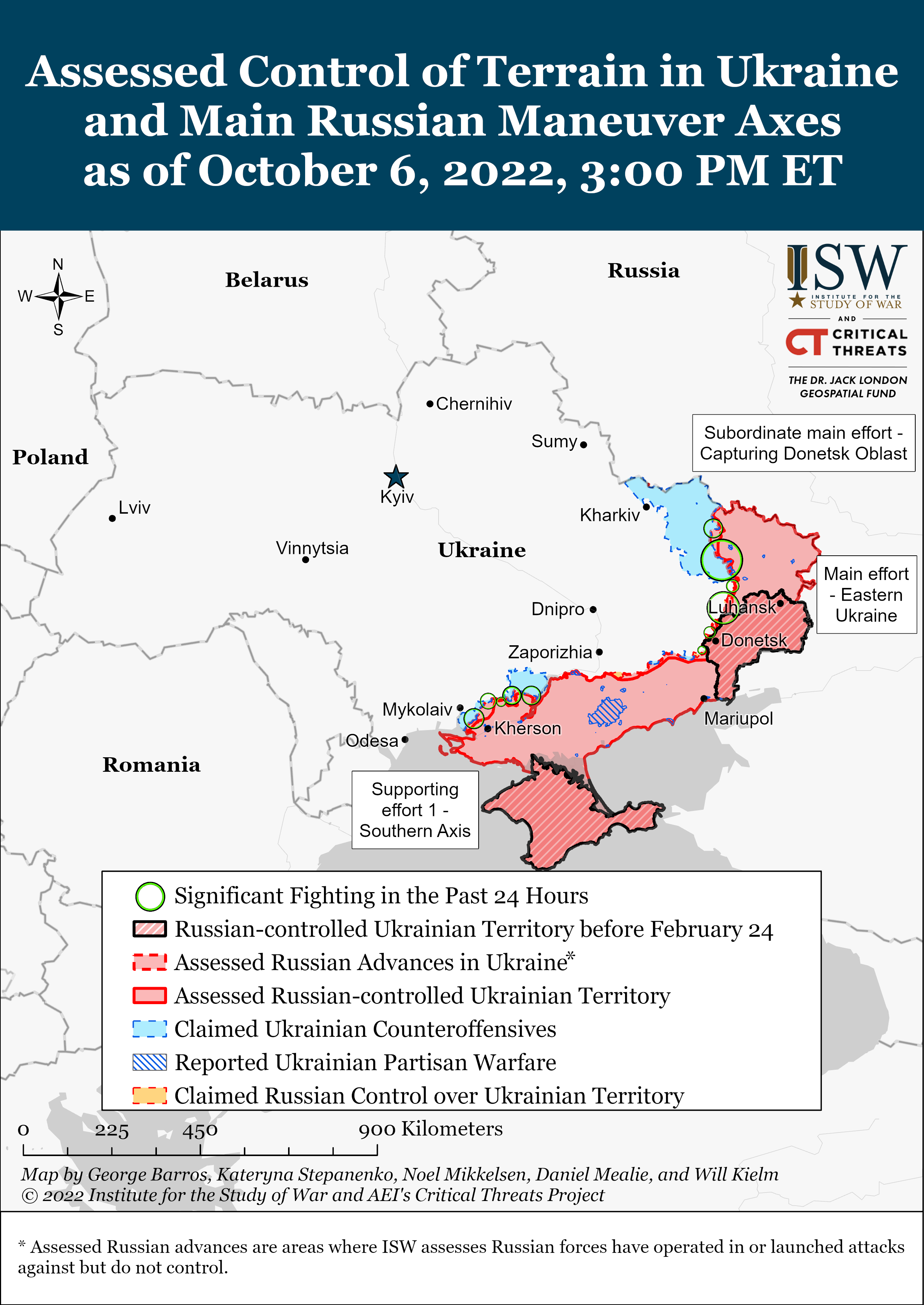 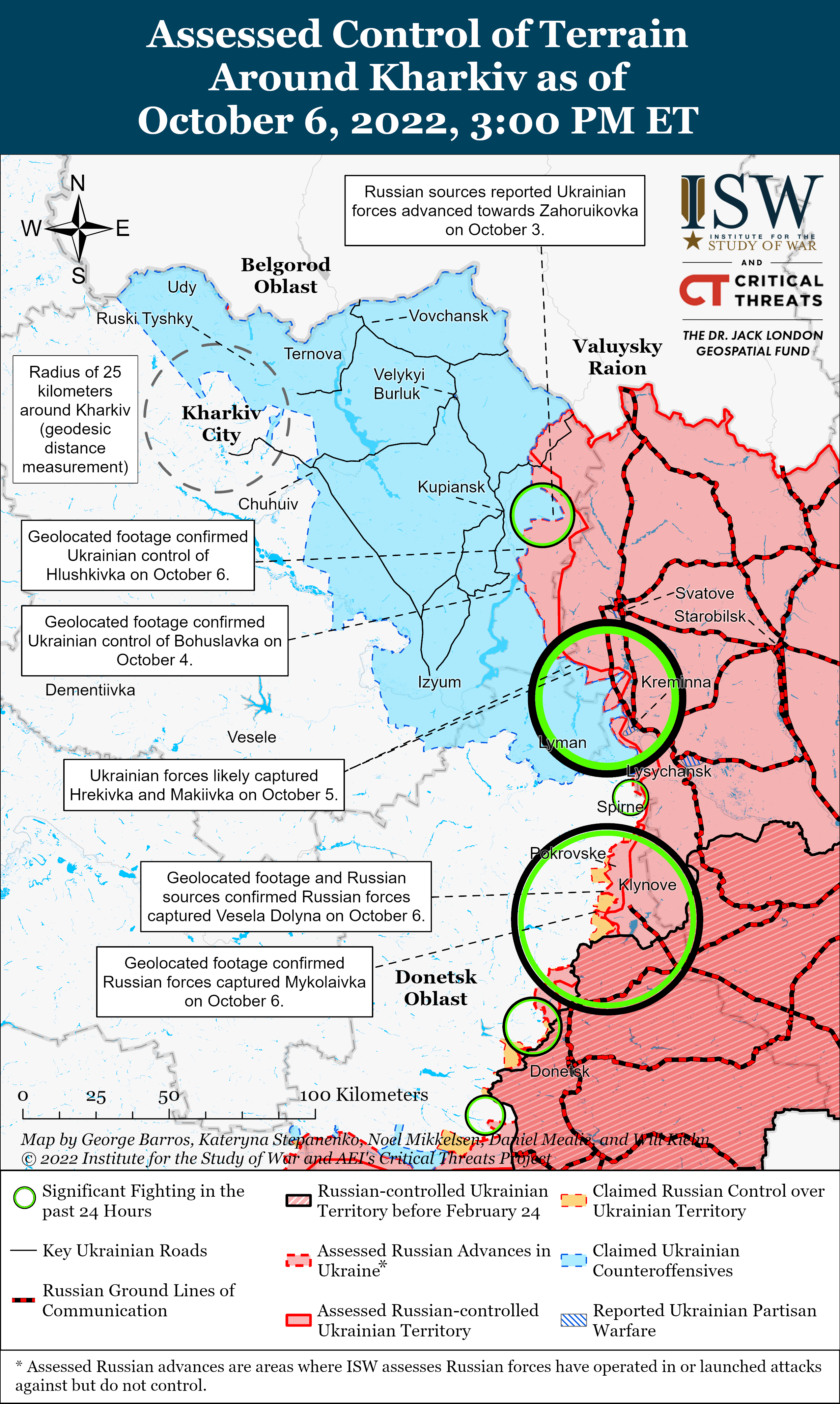 Ukrainian troops likely continued counteroffensive operations to threaten Russian positions along the Kreminna-Svatove road in western Luhansk Oblast on October 6. Luhansk People’s Republic (LNR) Ambassador to Russia Rodion Miroshnik claimed that over 10,000 Ukrainian troops have amassed west of Kreminna, and that Russian forces have largely lost contact with Svatove and Kreminna.[ix] Several Russian sources stated that Ukrainian troops are continuing sabotage and reconnaissance activities along the R66 (Svatove-Kreminna road) and that Russian troops are preparing for the defense of the Svatove-Kreminna line.[x] Local citizens and Russian troops have reportedly evacuated Svatove in anticipation of Ukrainian attacks.[xi] 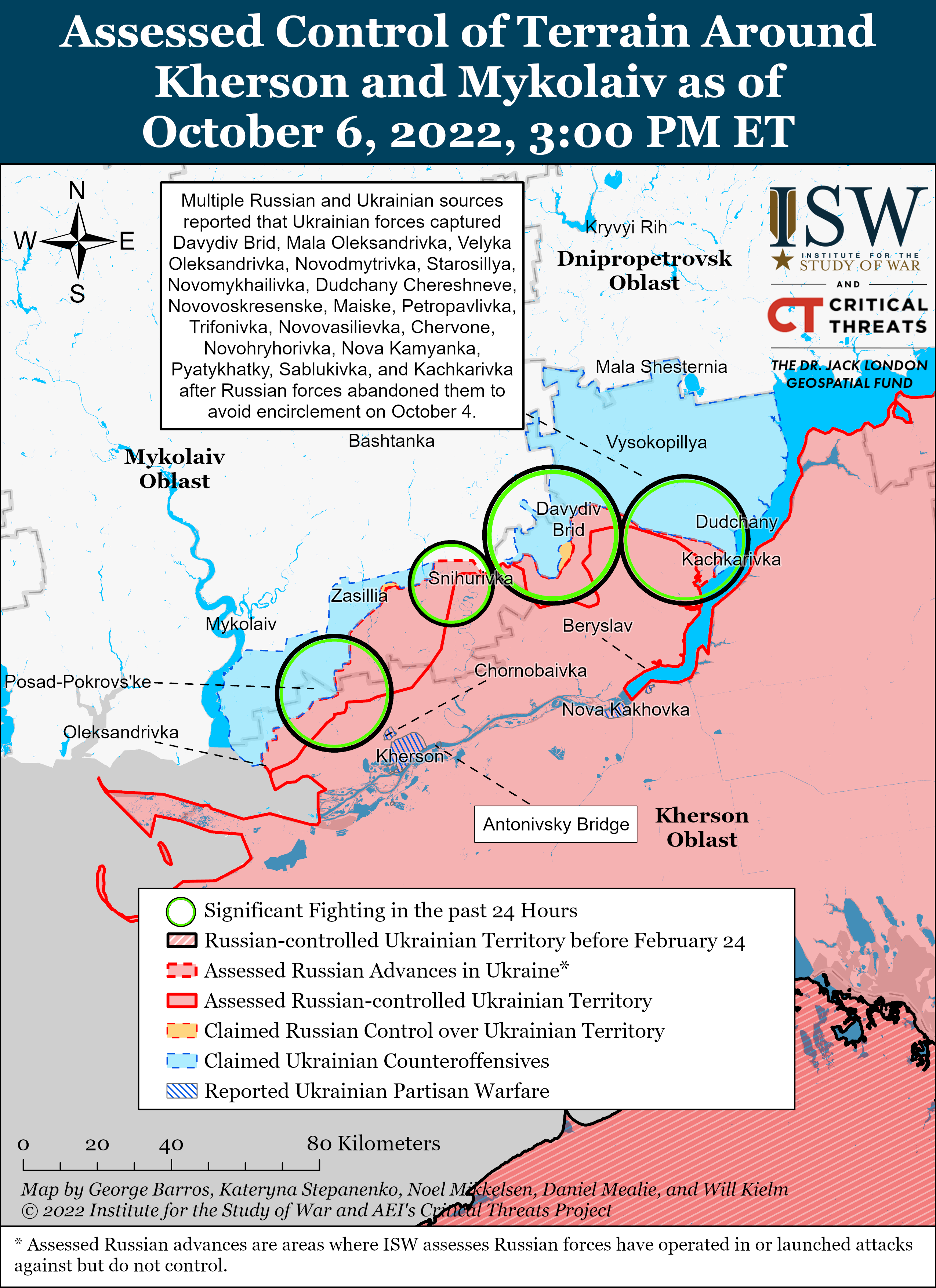 Russian troops are likely establishing defensive positions in upper Kherson Oblast following the collapse of the Russian line in northeast Kherson.  Satellite imagery dated October 3 and 4 shows Russian trench lines and radar deflector systems in the Beryslav-Nova Kakovkha area, which suggests that Russian troops are falling back to reinforce defensive positions in central Kherson Oblast in the face of recent Ukrainian advances in northeast Kherson Oblast.[xii] Russian milbloggers claimed that Ukrainian forces largely focused on regrouping in northern Kherson Oblast and did not conduct ground attacks on October 6.[xiii] The Russian MoD echoed claims made by some milbloggers that Ukrainian troops conducted limited ground attacks to break through new Russian defensive lines in northern Kherson, particularly from Piatykhatky (about 35km south of the Dnipropetrovsk Oblast border).[xiv]

Ukrainian forces additionally continued their interdiction campaign in support of ground operations on October 6. Social media footage shows the aftermath of a HIMARS strike on a building used by Russian forces in Kherson City on the night of October 5 to 6.[xviii] Residents of Oleshky (5km southwest of Kherson City) reported smoke following Ukrainian strikes in the area.[xix] Ukrainian forces also reportedly conducted strikes on the Antonivskyi Bridge.[xx]

Russian troops continued ground attacks in Donetsk Oblast on October 6 and likely made incremental gains around Bakhmut. The Russian MoD claimed that Russian forces took full control of Zaitseve (8km southeast of Bakhmut), but some milbloggers said that claims of the capture of Zaitseve are premature and that Wagner Group forces are continuing attempts to take full control of Zaitseve.[xxi] A Russian milblogger claimed that Wagner Group fighters took control of Vesela Dolyna (5km southeast of Bakhmut) and are advancing northwest towards Ivanhrad.[xxii] The Ukrainian General Staff noted that Russian troops continued ground attacks northeast of Bakhmut near Yakovlivka, Soledar and Bakhmutske and south of Bakhmut near Odradivka, Mayorsk, and Zaitseve.[xxiii] Ukrainian and Russian sources stated that Russian forces fought along the western outskirts of the Donetsk City-Avdiivka area and conducted ground assaults near Krasnohorivka and Vodyane and southwest of Donetsk City near Pobieda and Novomykhailivka.[xxiv] Russian troops continued routine shelling around Bakhmut and the Donetsk City-Avdiivka area.[xxv]

Local Russian officials appear to be frantically looking for ways to fund their mobilized units as the Kremlin increasingly expects local administrations to pay for the war effort from their own budgets, as ISW has previously reported.[xxx] A Russian opposition outlet reported on October 5 that the Ministry of Industry and Trade for the Republic of Mari El forced business owners to “donate” 1% of their earnings to fund mobilized personnel in the Republic.[xxxi] The ministry reportedly threatened to mobilize the employees of businesses that did not comply. One businessman told the outlet that he had to transfer money despite personal opposition to the war in order to protect his employees, and that the stated purpose of the funds was "voluntary donations to provide humanitarian assistance to military personnel called up for partial mobilization." An anti-war Russian outlet reported that public employees and teachers in Krasnodar Krai were forced to "voluntarily” deduct one day of October pay to transfer to a fund to support mobilized personnel.[xxxii] The outlet noted that authorities in Krasnodar previously forced public officials to donate parts of their salaries to repair a highway in Russian-occupied Crimea in 2014. Omsk Governor Alexander Burkov reported on October 5 that Omsk faced a budget deficit of more than 13 billion rubles and was unable to pay for the additional benefits for mobilized Omsk citizens—like childcare support—that other, wealthier regions of Russia were able to provide.[xxxiii] Burkov was responding to a video circulated by Omsk servicemembers who alleged that their salaries were unpaid.

It is unclear whether Omsk Oblast is providing any salary to its mobilized citizens, or which government entities are responsible for paying mobilized men—the Russian Ministry of Defense, the federal government, or local administrations. However, Moscow Oblast governor Andrei Vorobyov told mobilized men from Moscow on October 6 that the Moscow administration has purchased necessary equipment for them; his remarks received general acclaim from the milblogger community.[xxxiv] The Ministry of Defense is demonstrably not providing even basic military equipment to mobilized personnel. It appears to be leaving wealthy oblasts to fill that gap, while mobilized men from poorer oblasts may be going without non-crowdsourced equipment entirely.[xxxv]

Russian figures continue to poorly organize the nonconventional formation of volunteer battalions. Ultranationalist milblogger Igor Girkin announced on October 6 that his “Novorossiya” Societal Division would no longer oversee the creation and management of the “Nevsky” volunteer battalion detachment.[xxxviii] Girkin had commented on the progress of the ”Nevsky” detachment and its early October deadline for formation as recently as September 27.[xxxix]

Newly-mobilized Russian citizens continued to arrive in all parts of occupied Ukraine to train “at training grounds in close proximity to areas where combat missions are being performed,” according to the Russian Ministry of Defense. Mobilized citizens reportedly arrived in Luhansk and Donetsk oblasts for training on October 3 and 4.[xl] Russian proxy outlets also showed video of unspecified personnel training in Kherson Oblast and newly mobilized personnel training in Donetsk and Zaporizhia oblasts.[xli] The People’s Militia of the DNR reported on October 6 that the newly mobilized men will undergo intensive on-the-ground training that takes into account Russia’s recent experiences with combat in Ukraine. The Russian Ministry of Defense had told Interfax on October 2 that ”after the training is completed, these units will begin to carry out tasks for the control and defense of the liberated territories and will also operate as part of reserve and reinforcement units.”[xlii]

Members of the Russian public continued to express their dissatisfaction with Russia’s “partial mobilization” through attacks and threats against military facilities across the country. An unidentified individual issued a bomb threat to the administrative building for the Military Commissariat in Ulan-Ude, the Republic of Buryatia on October 5.[xliii] Russian authorities found no signs of an explosive. An unidentified person in Moscow threw four Molotov cocktails at an uninhabited barracks on October 5.[xliv] Police also arrested an 11th grade girl on October 5 after she threw two Molotov cocktails at the military registration and enlistment office in Kazan, Republic of Tatarstan.[xlv]

The Russian military’s policy of funneling new recruits into pre-existing units as individual-level replacements is continuing to create incohesive formations down to the team level. A Washington Post journalist reported that Ukrainian forces captured a Russian tank team near Mykolaiv with three soldiers from three different sources: a driver who was a mobilized prisoner with paratrooper experience in the Russian military, a commander from the Wagner Private Military Company, and a gunner who was a mobilized Ukrainian from Luhansk.[xlvi]

Russian and occupation administration officials began to set conditions for President Vladimir Putin’s United Russia party to dominate politics in illegally annexed Russian-occupied territories on October 6. United Russia Party Chairman Dmitry Medvedev stated that the party will extend its programming to the illegally annexed territories and create regional party branches there as well.[l] The head of the Donetsk People’s Republic (DNR), Denis Pushilin, announced on October 6 that he was the nominee for the post of the United Russia Regional Party Secretary for the DNR.[li] The Ukrainian Resistance Center reported that Russian officials are coercing public sector employees in Russian-occupied territories to join the United Russia party with threats of dismissal and mobilization if they refuse.[lii]