Ukrainian officials reported with increasing confidence that the Kremlin will announce mobilization on May 9. Ukraine’s Main Military Intelligence Directorate Chief Kyrylo Budanov said on May 2 that the Kremlin has begun to prepare mobilization processes and personnel ahead of the expected May 9 announcement and has already carried out covert mobilization.[1] Ukraine’s National Security and Defense Council said that high-ranking Russian officials are trying to legitimize a prolonged war effort as the Third World War against the West, rather than the "special military operation” against Ukraine, as Russian President Vladimir Putin has hitherto framed Russia’s invasion.[2] ISW has no independent confirmation of Russian preparations for mobilization.

Russia’s long-term intentions regarding the status of Mariupol and other occupied areas seem confused. Some anecdotes from Mariupol indicate that Russia may plan to incorporate Mariupol and the surrounding environs into the Donetsk People’s Republic (DNR), and possibly annex the DNR to the Russian Federation. Other anecdotes suggest that Russia could directly absorb Mariupol into Rostov Oblast. These inconsistencies could simply be artifacts of reporting or confusion on the ground, but they could also indicate actual confusion about Russia’s long-term plans for governing the Ukrainian regions that Moscow’s forces currently occupy. These anecdotes clearly support the assessment that Putin has no intention of ceding occupied territories back to an independent Ukraine and is, at most, considering exactly how he intends to govern regions that Russia has illegally seized. 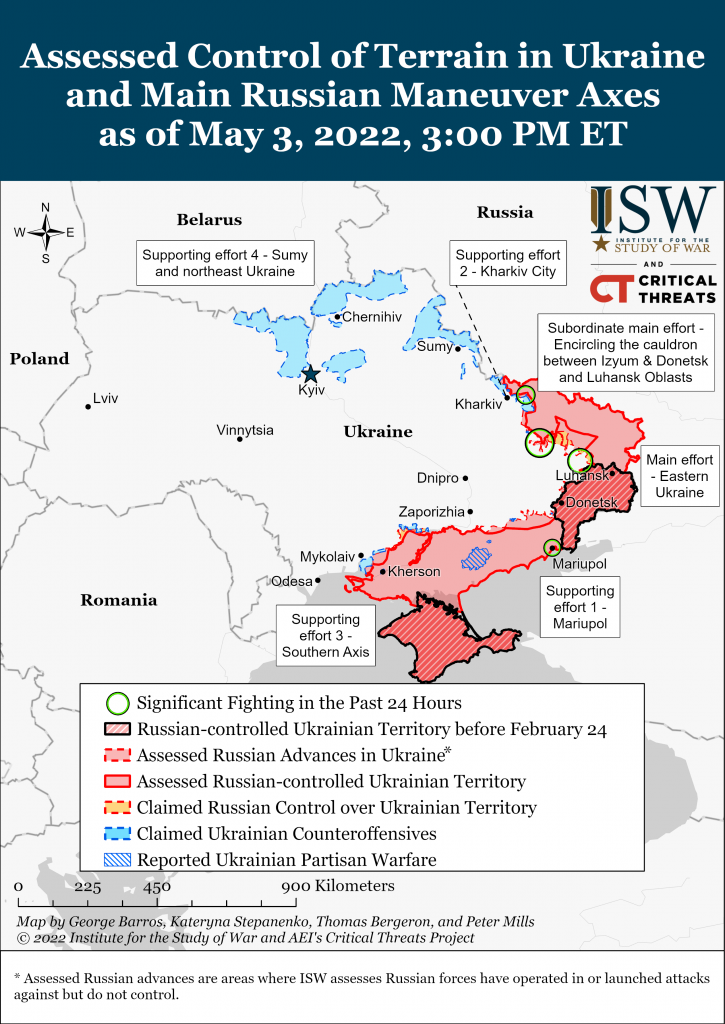 ISW has updated the structure of its discussion of the primary efforts that Russian forces are currently engaging in. The main Russian effort is concentrated in Eastern Ukraine and includes one subordinate main effort and four supporting efforts. The subordinate main effort is the encirclement of Ukrainian troops in the cauldron formed between the Izyum-Slovyansk highway and the Kreminna-Rubizhne-Popasna frontline in Luhansk. The four supporting efforts are: completing the seizure of Mariupol, Kharkiv City, the Southern Axis, and threatening northeastern Ukraine from Russian and Belarusian territory.

Russian forces continued to fire along the Donetsk-Luhansk frontline and did not make any confirmed ground attacks on May 3.[6] The Ukrainian General Staff reported that elements of the 1st and 2nd Army Corps (forces of the self-proclaimed Donetsk and Luhansk People’s Republics), 8th, 58th, and 5th Combined Arms Armies, Pacific Fleet, 2nd and 41st Combined Arms Armies, 90th Tank Division, and unspecified VDV elements are regrouping to advance westward in the direction of Lyman and Slovyansk.[7] Remotely sensed NASA data for fires and heat anomalies observed significant high-temperature anomalies in Lyman between May 2 and 3 over the past 24 hours, indicating Russian indirect fire that was likely in preparation for such an advance.[8] The large number of combined arms armies, divisions, and other organizations identified as contributing troops to this effort suggests that many if not most of the Russian units engaged on this axis are understrength and in ad-hoc organizations. That observation, if true, may help explain the slow and halting pace of the Russian advance. 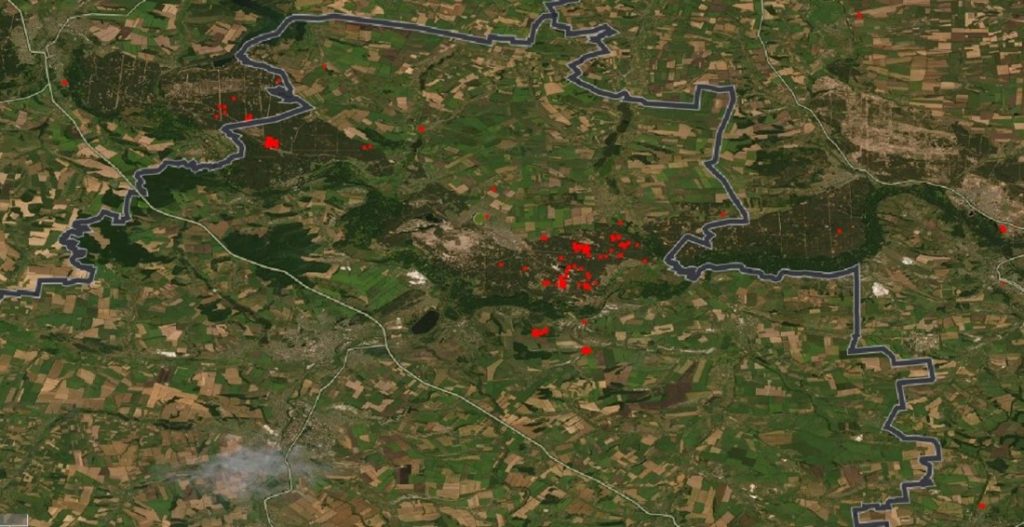 [Source: NASA‘s Fire Information for Resource Management System over Lyman for May 2 and May 3] 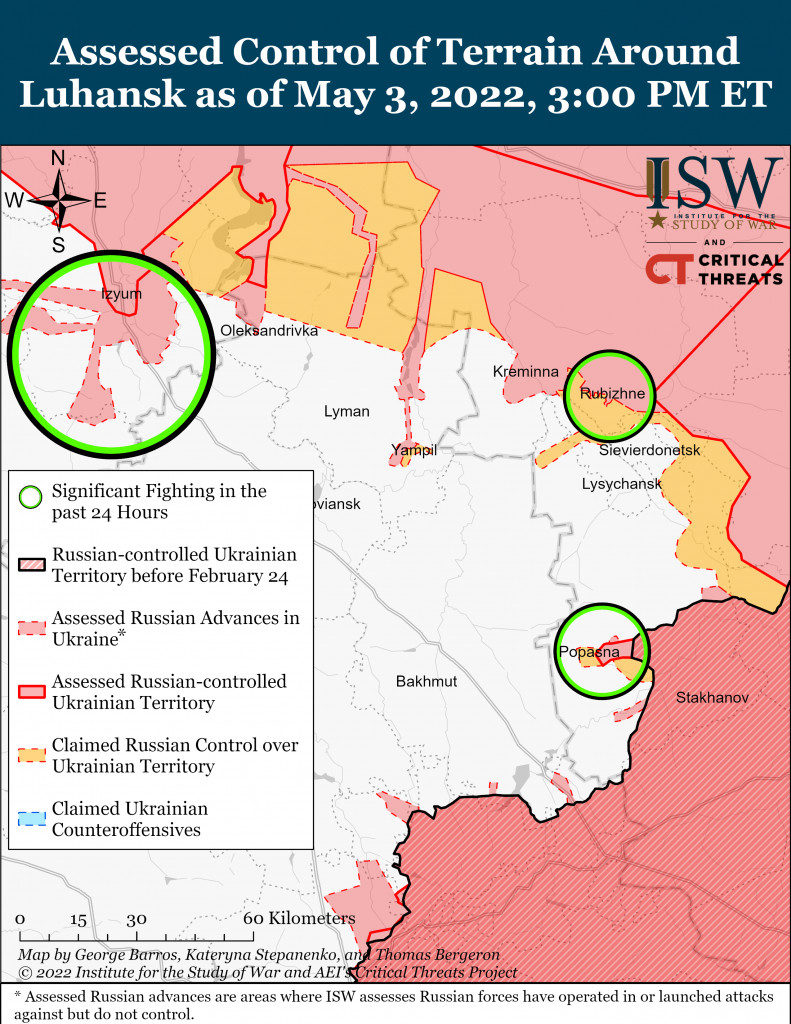 Russian forces resumed air, artillery, and ground attacks on the Azovstal Steel Plant on May 3 after the conclusion of preliminary evacuation efforts.[9] Deputy Commander of the Azov Regiment Sviatoslav Palamar stated that Russian forces conducted a ground assault to attempt entry of Azovstal under the cover of airstrikes that killed two civilians inside the plant.[10]

Russian occupying forces continue to set conditions for the administrative occupation of Mariupol. The Ukrainian Main Intelligence Directorate (GUR) reported that private enterprises in Rostov, Russia, received orders to produce official seals and stamps for public institutions in Mariupol that reportedly contain the inscription: “Russia, the Republic of Donbas, Mariupol, the military-civilian administration.”[11] GUR’s report is consistent with Advisor to the Mayor of Mariupol Petro Andryushchenko’s statement that children in the Mangush region near Mariupol are signing their school notebooks with “Rostov Oblast” and indicates continued Russian efforts to further institutionalize control of occupied territories in anticipation of potential annexation to Russia.[12] These reports taken in tandem, however, indicate potential confusion in the Kremlin’s ultimate end goal for the status of Mariupol and other occupied areas. Occupation authorities are likely unclear as to whether the intention is to absorb Mariupol into the existing administration of the Donetsk People’s Republic (DNR), which then may be annexed to Russia, or to directly attach Mariupol to Russia as part of Rostov Oblast. Russia has not formally annexed the DNR, moreover, but rather recognized its independence, putting the formulation “Russia, the Republic of Donbas” at variance with Russia’s current formal stance. These oddities may indicate inconsistencies in the plans or implementation of occupational frameworks that could likely play out in occupied areas beyond Mariupol. 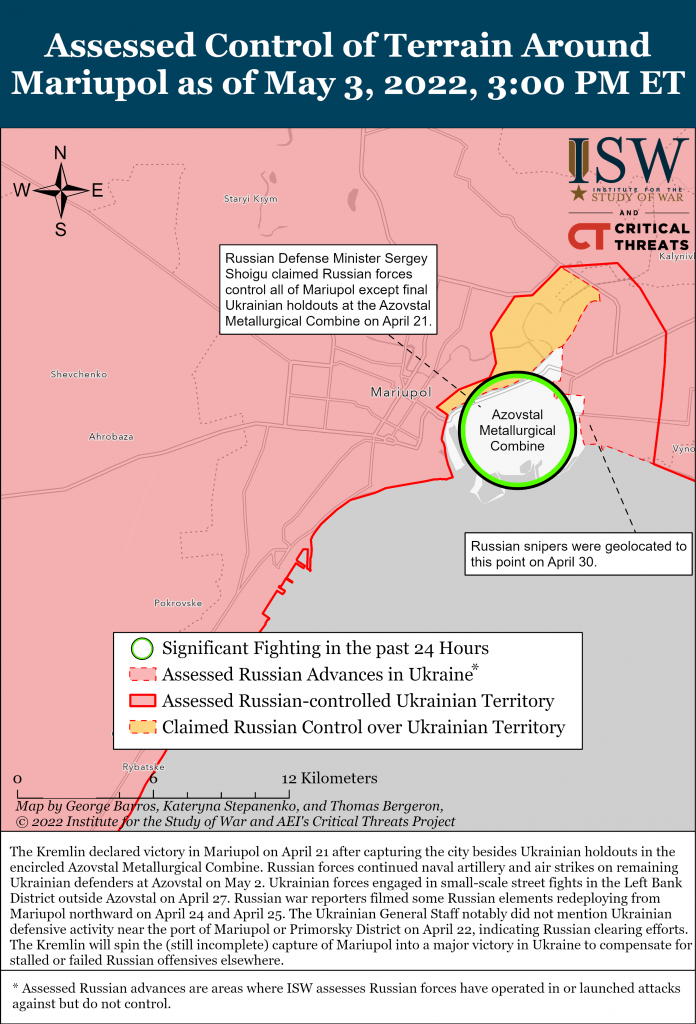 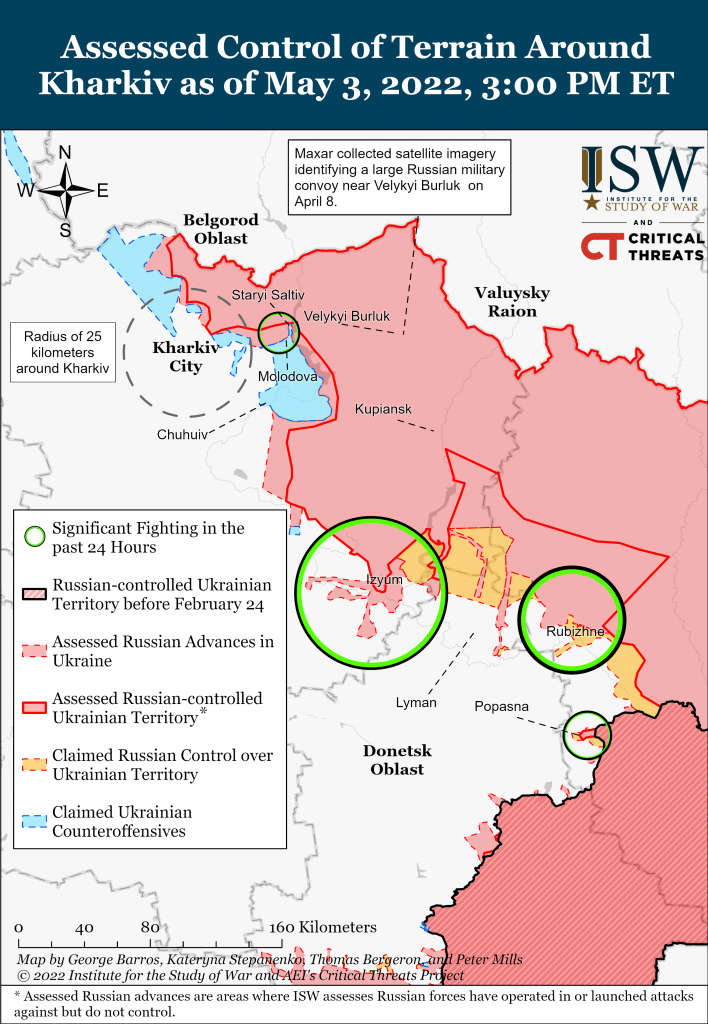 Russian forces conducted limited ground offensives in Zaporizhia Oblast on May 3 but confined themselves to shelling elsewhere in southern Ukraine.[18] Zaporizhia Oblast Administration Head Oleksandr Staruch reported that Russian forces launched an assault on the outskirts of Huliapole and on the area east of the settlement but did not seize any new territories.[19] Russian forces shelled the settlement of Zaluznychne around 8 km from Huliapole, likely to break the Ukrainian defenses and secure the northbound T0401 highway.[20]

The Russian Defense Ministry released a video of Bastion coastal defense complexes firing Oniks anti-ship cruise missiles at land targets, claiming that Russian forces struck a Ukrainian logistics center in Odesa Oblast on May 3.[21] The use of the Oniks anti-ship missile in a ground-attack role may suggest that Russian forces are experiencing shortages of the other types of long-range precision-guided munitions necessary to disrupt Ukrainian logistics.[22]

Ukraine’s Southern Operational Command said that Ukrainian forces destroyed a Russian “Forpost” reconnaissance drone in Odesa Oblast on May 3, confirming ongoing Russian reconnaissance in the area amid growing tensions in Transnistria.[23] Ukrainian officials blocked the Kuchurhan-Pervomaisc border checkpoint with Transnistria amid new Transnistrian claims that the proxy republic repelled a terrorist drone attack on May 3, likely in preparation for possible escalations.[24] The Ukrainian General Staff said that Russian officials are taking unspecified measures to prepare for evacuations of Russian military families from Transnistria.[25] 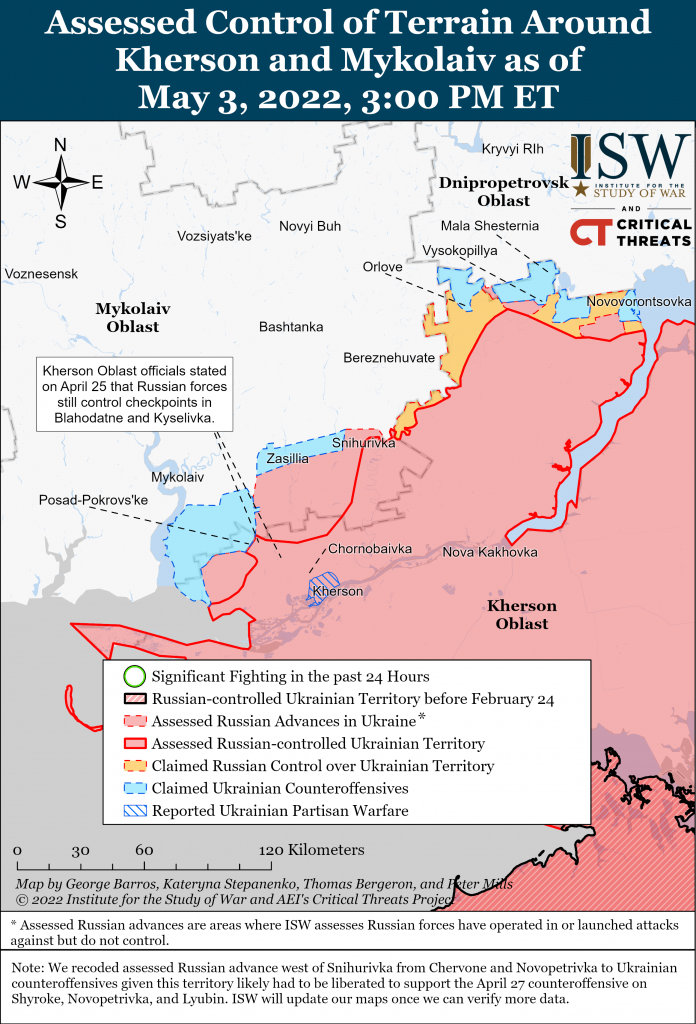