Russian forces did not conduct any confirmed ground attacks in Ukraine on May 2. The April 30 Ukrainian artillery strike on the Russian command post in Izyum may be continuing to disrupt Russian efforts on the Izyum axis. Russian troops on the Donetsk-Luhansk frontline and Southern Axis continued to regroup, likely in preparation for renewed offensives or to resist or reverse Ukrainian counter-offensives. 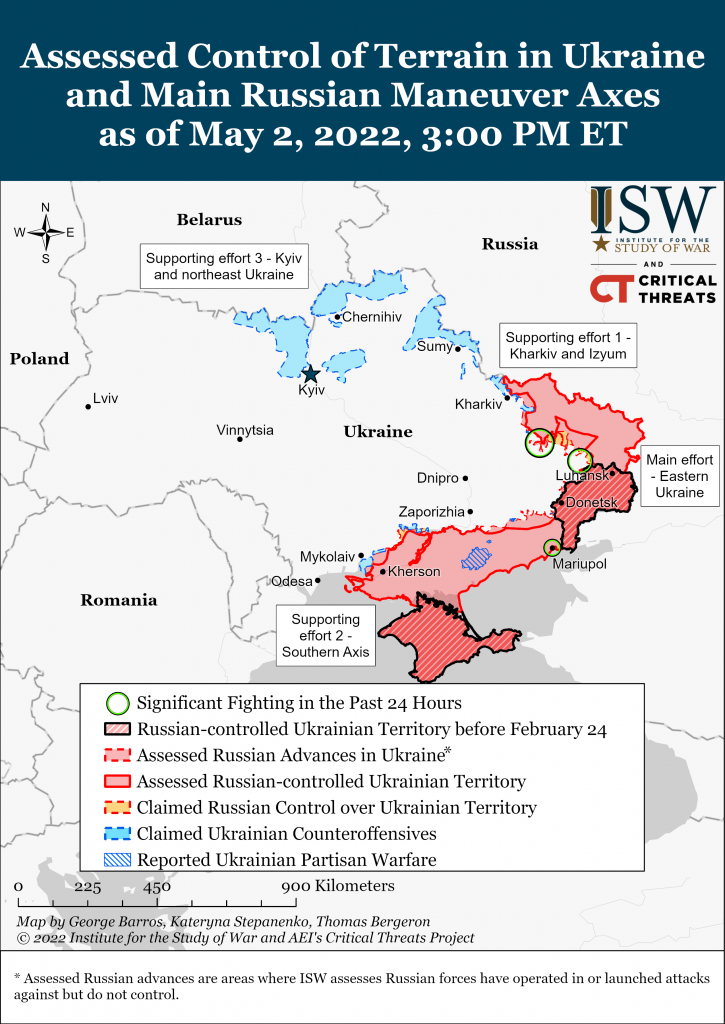 Russian forces conducted naval artillery and air strikes on Mariupol while civilian evacuations from the Azovstal Steel Plant continued on May 1 and May 2.[1] Ukraine’s Military Law Enforcement Service reported that over 100 civilians evacuated to Zaporizhia city from Azovstal on May 2, but Ukrainian defenders remain at the plant.[2] The Russian Defense Ministry claimed that Russian forces saved 80 civilians (whom it falsely asserted had been held hostage at the plant) and that 11 evacuees ”volunteered“ to remain in the Donetsk People’s Republic.[3] Continued Russian bombardment of Mariupol belies Moscow’s claims that its forces have secured the city. 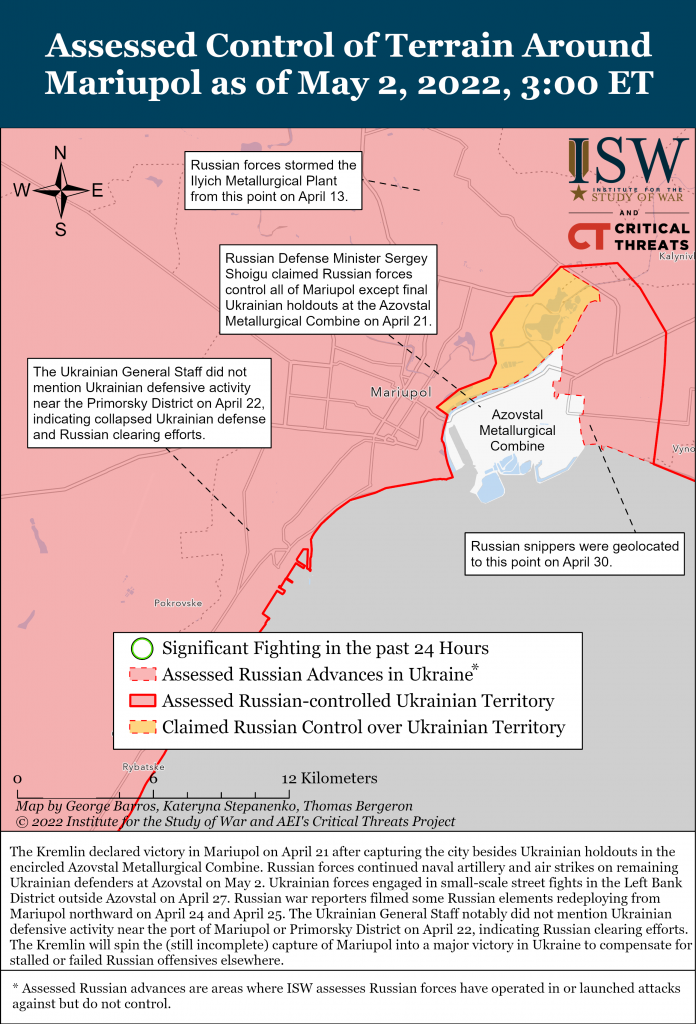 Russian forces shelled along the Donetsk-Luhansk frontline and did not conduct any confirmed ground attacks on May 2.[4] Russian troops continued to focus on completing the seizure of Rubizhne and Popasna.[5] The Ukrainian General Staff forecasts that Russian troops will likely attempt to use these points to launch an offensive in the direction of Severodonetsk.[6] The Ukrainian General Staff also stated that Russian forces moved one battalion tactical group (BTG) to the Popasna area to improve their tactical position and prepare to advance toward Severodonetsk.[7] The Ukrainian General Staff observed that Russian troops are setting conditions to advance on Slovyansk from the Lyman-Siversk frontline, which lies within 25 km to the east of Slovyansk.[8] This observation is consistent with ISW’s previous reporting of Russian troops making marginal southwestward advances around the Yampil area over the last few days.[9] 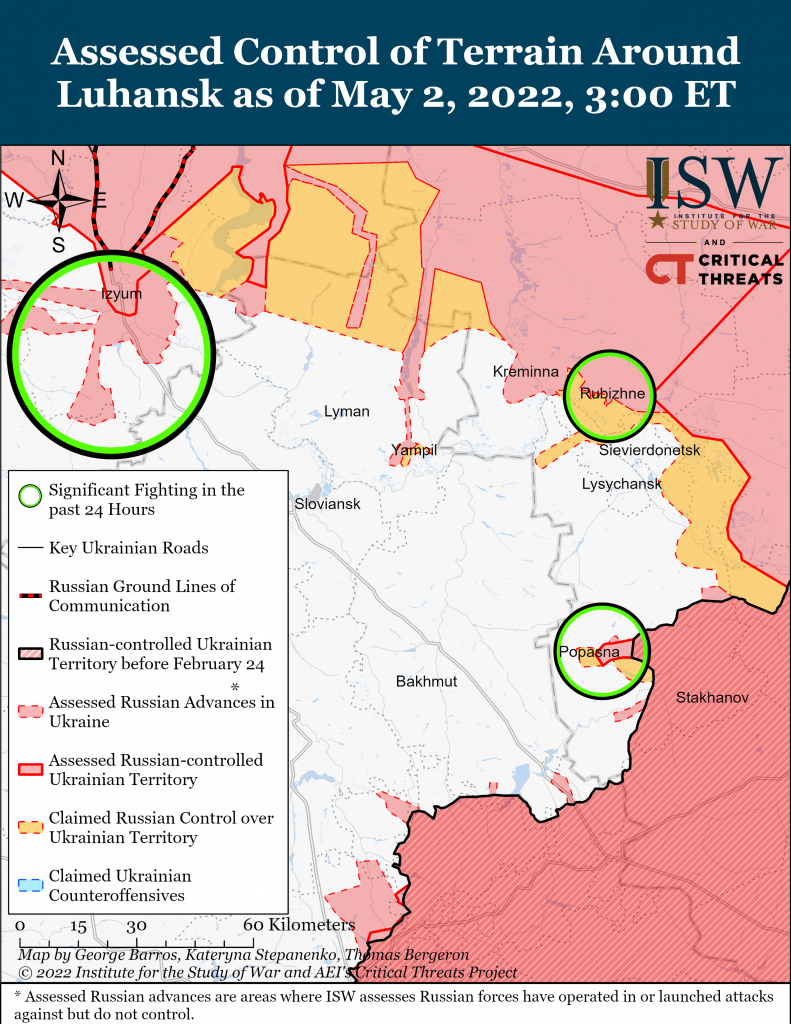 Russian forces continued to regroup and conduct unspecified offensive operations in the Izyum area, but did not make any confirmed advances on May 2.[10] The April 30 Ukrainian rocket artillery strike on the Russian Airborne (VDV) and 2nd Combined Arms Army command post in the Izyum area may be continuing to disrupt Russian operations along the Izyum axis. 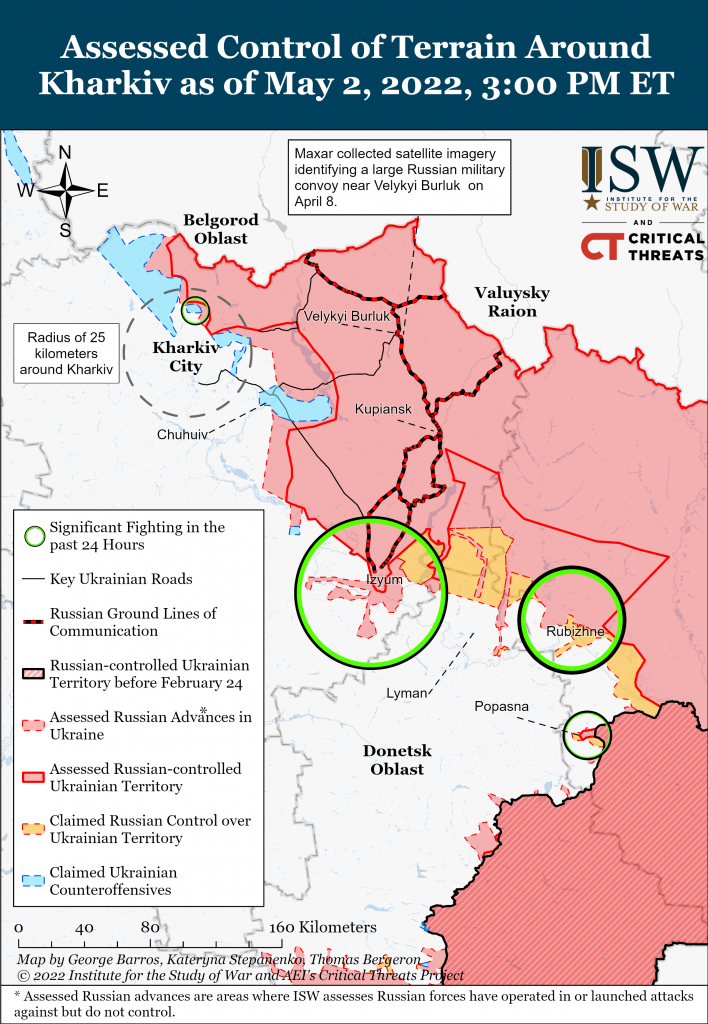 Russian forces continued to regroup, reconnoiter, and concentrate logistics on May 2, likely in preparation for ground assaults on Ukrainian position in the directions of Mykolaiv, Kryvyi Rih, and Zaporizhia.[13] The Ukrainian General Staff reported that Russian forces deployed an unspecified artillery unit to Tokmak that will likely support Russian attempts to seize Orihiv, Zaporizhia Oblast.[14] Orihiv is on the intersection of several major highways, and its seizure could allow Russian forces to push toward Zaporizhia city as well as Donetsk. Russian forces also reportedly established an equipment repair shop in an occupied Zaporizhia Oblast settlement.[15]

Ukraine’s Operational Command “South” said that Russian forces did not attempt ground offensives in southern Ukraine on May 2 but conducted periodic artillery and mortar shelling and reportedly launched a third rocket strike on the bridge leading over the Dniester Estuary to Romania.[16] Ukrainian forces claimed to have struck Russian ammunition depots in Chornobaivka, Kherson Oblast, on May 2; a video post on social media may corroborate that claim, but ISW cannot verify it with greater confidence.[17] Ukrainian forces also destroyed two Russian Raptor-class patrol boats that reconnoitered the Danube River delta on May 2.[18] There were no significant situational changes in Transnistria.[19] 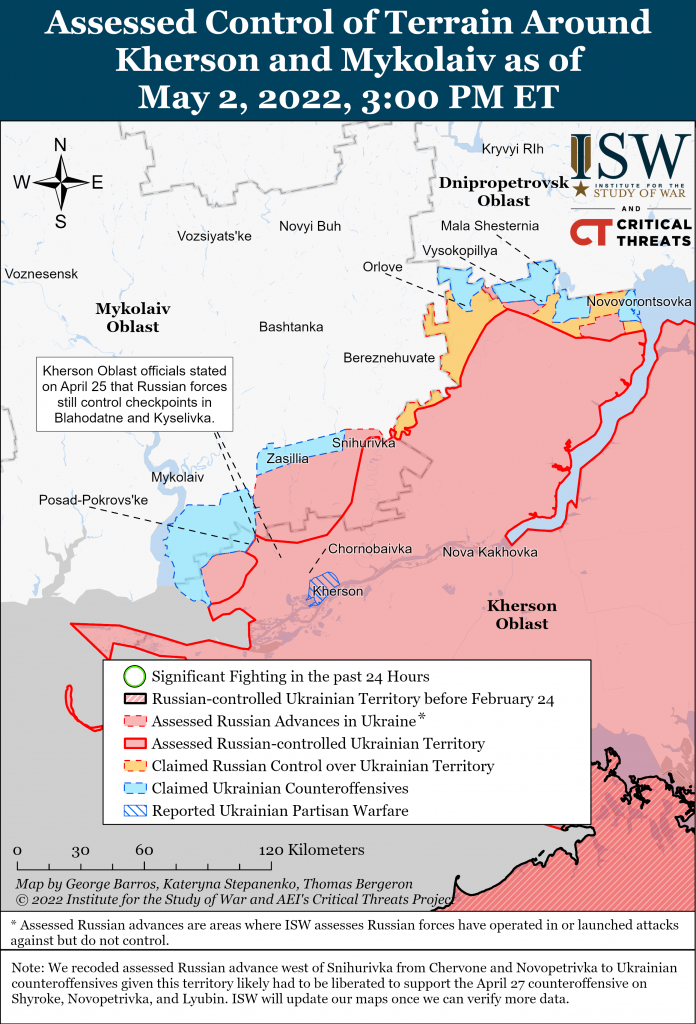