Ukrainian forces likely conducted a deliberate withdrawal from Lysychansk, resulting in the Russian seizure of the city on July 2. Geolocated footage showed Russian forces casually walking around northern and southeastern neighborhoods in Lysychansk in a way that suggests that there are few or no remaining Ukrainian forces in the city as of July 2.[1] Ukrainian military officials did not publicly announce a troop withdrawal but neither did they report on defensive battles around Lysychansk. Ukrainian Internal Affairs Minister Vadym Denysenko vaguely noted that Russian forces have a “high probability” of capturing Lysychansk but that they will have a difficult time advancing in Donetsk Oblast past Slovyansk and Kramatorsk.[2] Ukrainian National Guard Spokesperson Ruslan Muzychuk rejected reports of Russian forces seizing and encircling Lysychansk, but these denials are likely outdated or erroneous.[3] The Luhansk People’s Republic (LNR) Ambassador to Russia, Rodion Miroshnik, had previously claimed that Ukrainian forces began withdrawing from Lysychansk on June 28.[4] ISW will continue to monitor the situation.

The Russian Ministry of Defense (MoD) claimed that Chief of the Russian General Staff Valery Gerasimov inspected Russian troop groupings in Ukraine on July 2.[5] The Russian MoD posted a slideshow of images that reportedly prove that Gerasimov still holds his position as Chief of General Staff and that he had recently been in Ukraine, but notably did not include any video footage of Gerasimov’s purported inspection of Russian troops. This post was likely a response to recent speculation that Gerasimov had been removed from his post as part of the Kremlin’s purge of high-level Russian military leadership due to Russian failures in Ukraine. The Russian MoD amplified a claim that Ukrainian media has been lying about Gerasimov’s removal and stated that Gerasimov is still serving as the Chief of the General Staff.[6] The hasty presentation of a slideshow that does not clearly demonstrate that Gerasimov was recently performing his duties in Ukraine suggests that the Russian leadership is sensitive to rumors of a purge of senior Russian officers or possibly to the impression that the senior most officers are absent or uninvolved in the conflict. The Kremlin likely also seeks to retain or rebuild trust in Russian military leadership against the backdrop of major organizational restructuring, failures, and high casualties, as ISW has previously reported.[7] 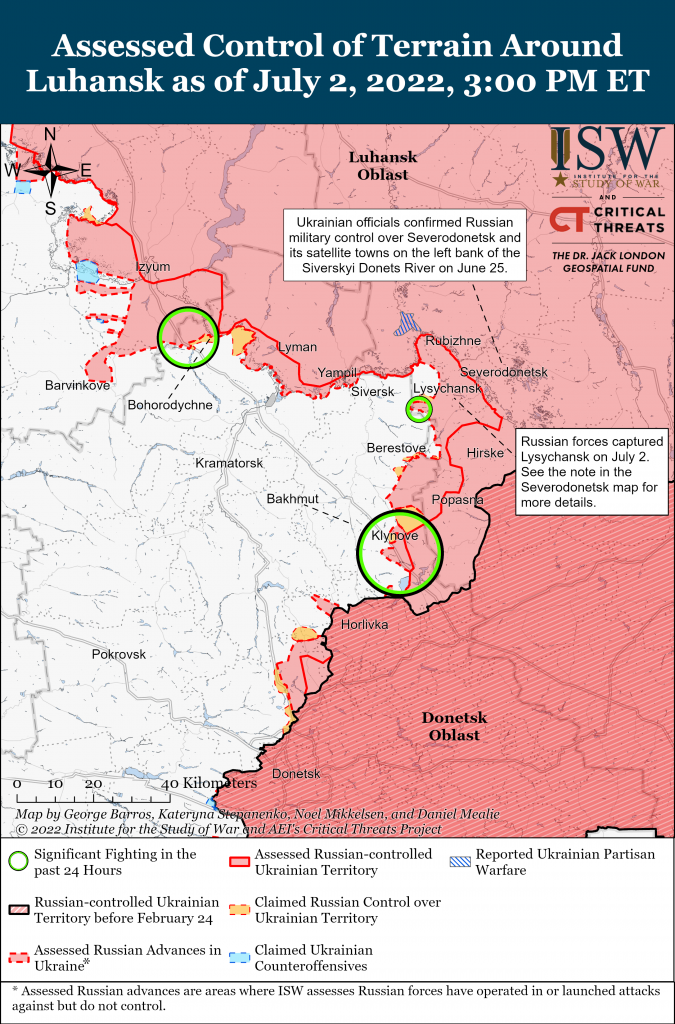 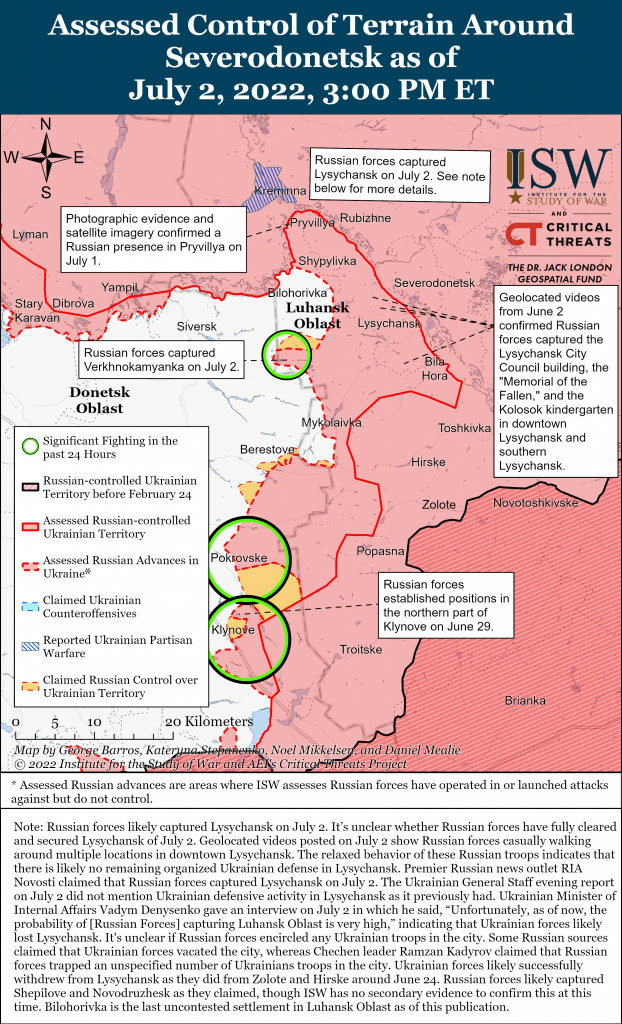 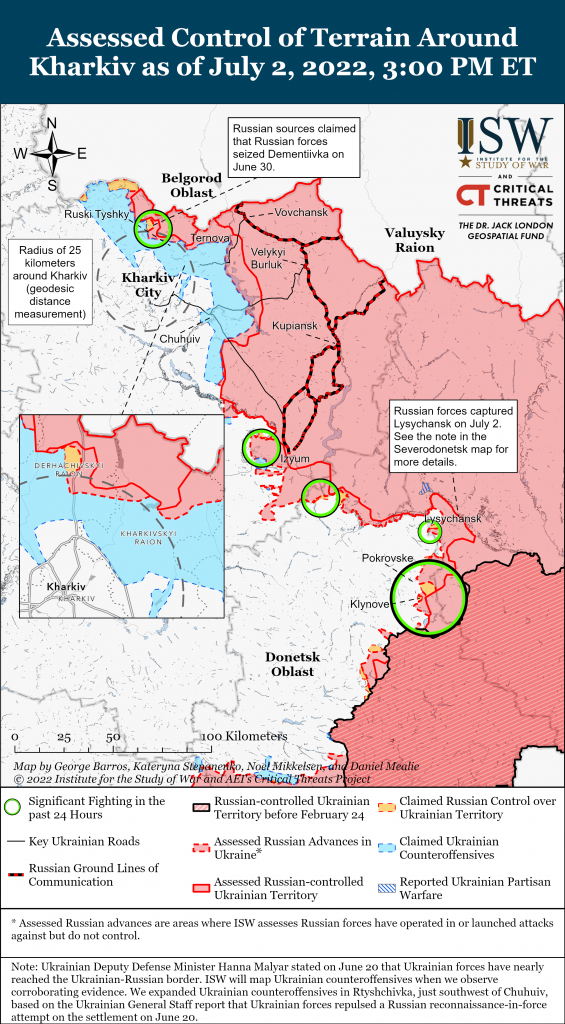 Ukrainian forces plan to continue to threaten Russian ground lines of communication (GLOCs) running from Belgorod, Russia, to southern Kharkiv Oblast with Western-supplied long-range rocket artillery. The Chief of Staff of the Ukrainian Kraken Special Unit, Konstiantyn Nemichev, stated that Ukrainian forces will use US-provided HIMARS rocket artillery systems to disrupt Russian GLOCs running through Vovchansk, Kupyansk, and Izyum. Kupyansk is a significant logistical hub for Russian forces operating on the Kharkiv axis and is located approximately 50km from the frontline. Vovchansk lies approximately 15-20 km from the frontline, but Russian operations in northern Kharkiv have prevented Ukrainian forces from targeting Vovchansk with indirect fire thus far. Russian GLOCs to Izyum are the most exposed, approximately 15km east of the nearest frontline, and NASA FIRMS heat anomaly detection has observed heat anomalies consistent with indirect fire attacks in wooded areas west of Izyum in recent weeks. Most Russian major ammunition depots and support stations along the Kharkiv axis would be within the range of HIMARS systems that would cover the Kharkiv axis. 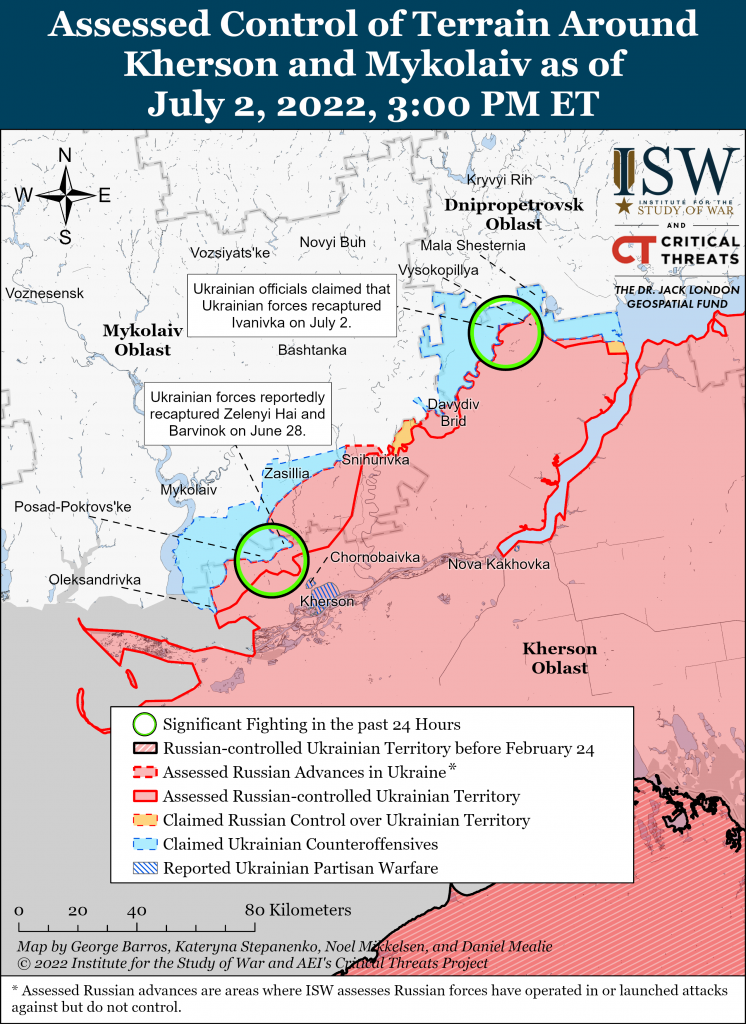 Russian military leadership continues to rely on ad hoc composite units to support offensive operations in Ukraine. Russian media reported on July 2 that a volunteer battalion of the 200th Motorized Rifle Brigade of the Northern Fleet is preparing to deploy to Ukraine.[29] This battalion consists of reservists, volunteers, military policemen, servicemembers from coastal defense units, and sailors from various naval vessels, which likely means that the volunteers are inadequately trained and do not have the requisite infantry experience to be effective in high-intensity combat. Some of the servicemembers of the battalion notably fought in the early stages of the war and are being redeployed.[30] The composite nature of this battalion indicates that Russian military leadership continues to struggle with proper and consistent constitution of combat-ready units.

Proxy leadership may be setting conditions for the direct annexation of proxy republics into the Russian Federation. Donetsk People’s Republic (DNR) Head Denis Pushilin announced on July 2 that he replaced four DNR public administration officials with “experienced” Russian ministers in order to institute the “Russian paradigm of public administration.”[31] Pushilin had previously announced the reorganization of the DNR government in June. The measures taken to streamline the governmental practices and frameworks of the DNR with the Russian system suggest that proxy officials are likely preparing to integrate the DNR directly into the Russian Federation.[32]