Belarusian President Alexander Lukashenko continued to set informational conditions to resist Russian pressure to enter the war against Ukraine by claiming that NATO is preparing to attack Belarus. Lukashenko blamed Ukraine and NATO for a growing number of provocations near the Belarus-Ukrainian border and stated that Ukraine is trying to drag NATO forces into the war.[1] Lukashenko stated that Belarusian officials managed to deter a potential adversary from using military force against Belarus and that NATO is building up forces and intensifying combat training in neighboring countries.[2] The Belarusian Minister of Defense Viktor Khrenin stated that there is no direct preparation for war and that Belarus will only defend its territory.[3] Ukrainian Main Military Intelligence Directorate (GUR) representative Vadym Skibitsky reported that there are no signs of the formation of a strike group on Belarusian territory.[4] Lukashenko and Khrenin likely made the comments to bolster what ISW has previously assessed as an ongoing information operation aimed at fixing Ukrainian forces on the border with Belarus in response to the threat of Belarus entering the war.[5] Lukashenko and Khrenin also likely focused the information operation on supposed NATO aggression and provocative activities along the Belarusian border to suggest that the Belarusian military needs to remain in Belarus to defend against potential NATO aggression, and thus set informational conditions for resisting Russian pressure to enter the war in Ukraine. ISW continues to assess that Belarusian entry into the Russian war on Ukraine is extremely unlikely. 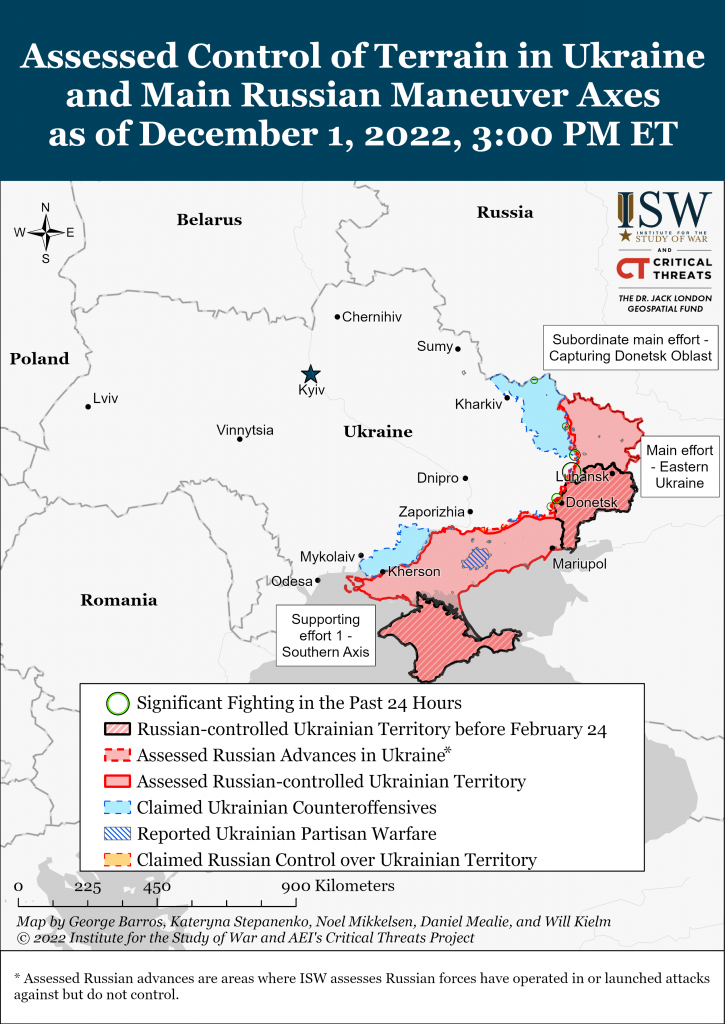 We do not report in detail on Russian war crimes because those activities are well-covered in Western media and do not directly affect the military operations we are assessing and forecasting. We will continue to evaluate and report on the effects of these criminal activities on the Ukrainian military and population, specifically on combat in Ukrainian urban areas. We utterly condemn these Russian violations of the laws of armed conflict, Geneva Conventions, and humanity even though we do not describe them in these reports. 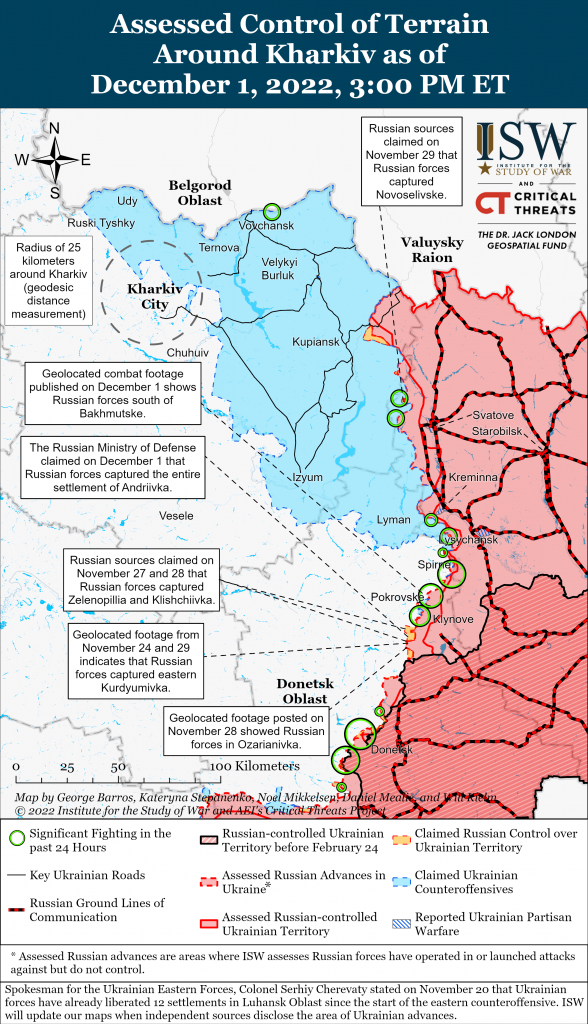 Russian forces continued efforts to defend against Ukrainian counteroffensive operations and regain lost positions along the Svatove-Kreminna line on December 1. The Ukrainian General Staff reported that Ukrainian forces continued to repel Russian ground assaults near Novoselivske (14km northwest of Svatove) and Stelmakhivka (15km northwest of Svatove).[6] The Russian Ministry of Defense (MoD) claimed that Russian forces prevented a Ukrainian advance in the direction of Kuzemivka (13km northwest of Svatove).[7] Ukrainian General Staff Deputy Chief Oleksiy Hromov reported that Ukrainian forces anticipate that Russian forces will attempt to restart offensive operations in the Lyman direction to regain the initiative.[8] Hromov added that the Russians are building defensive lines in the Svatove and Lyman directions to prevent Ukrainian advances.[9] Former Luhansk People’s Republic (LNR) ambassador to Russia, Rodion Miroshnik, claimed that Ukrainian forces are transferring elite Ukrainian brigades to the Lyman and Kupyansk directions to prevent Russian advances.[10] ISW offers no assessment of this claim.[11] 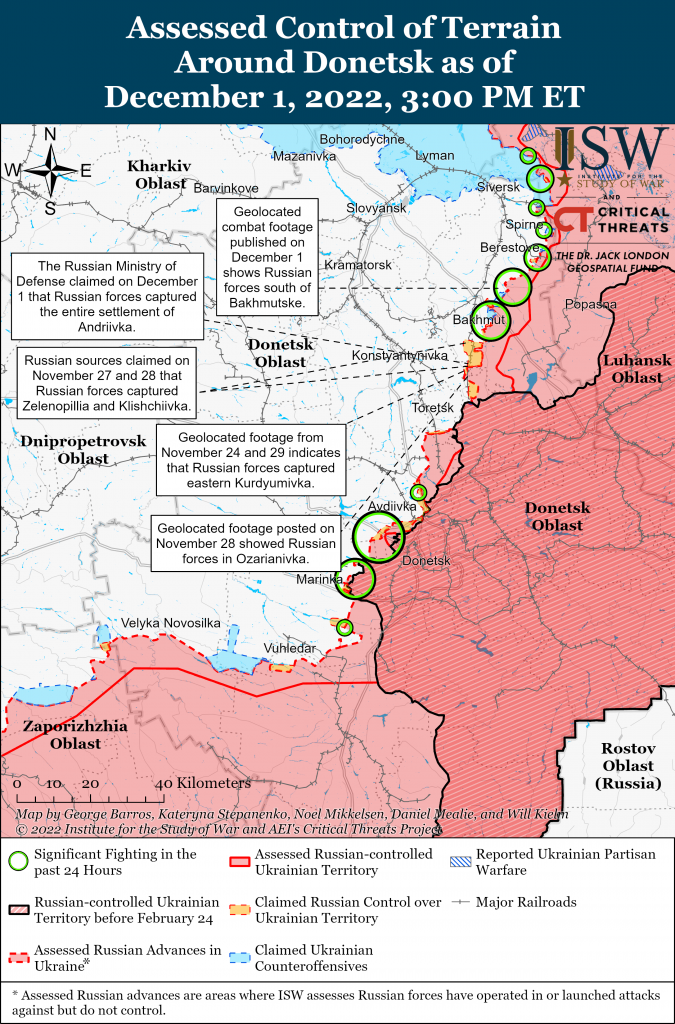 Russian forces likely continued to make marginal advances in the Bakhmut area amidst ongoing offensive operations on December 1. Ukrainian sources reported that Ukrainian forces repelled Russian assaults near Bakhmut; within 22km northeast of Bakhmut near Yakovlivka, Soledar, Bakhmutske, and Bilohorivka; and within 14km southwest of Bakhmut near Opytne, Mayorsk, and Kurdyumivka.[20] Social media sources and a Russian milblogger posted photos on December 1 showing Russian forces south of Bakhmut in Kurdyumivka and Ozarianivka.[21] The Russian Ministry of Defense (MoD) claimed that Russian forces completely control Andriivka (within 10km south of Bakhmut).[22] Geolocated footage posted on December 1 shows Ukrainian forces reportedly withdrawing from positions on the western side of the highway that runs through Opytne (within 4km south of Bakhmut).[23] A Russian milblogger published footage claiming to show Russian forces conducting offensive operations west of Kurdyumvka and claimed that Russian forces now control most of the Horlivka-Bakhmut highway.[24] Another Russian source claimed that Russian forces could now interdict all roads in the Bakhmut direction.[25] CNN published a video report on December 1 in which Ukrainian military commanders in the Bakhmut area tell a correspondent that their forces are outnumbered and facing serious supply issues.[26] The Ukrainian military commanders also told the CNN correspondent that Russian forces are committing significant forces to assaults in the Bakhmut area and are suffering heavy casualties.[27] ISW has previously assessed that the Russian effort to take Bakhmut is a high-cost effort concentrated on a city of limited operational significance.[28]

Russian forces continued to conduct offensive operations in the Avdiivka-Donetsk City area on December 1. Ukrainian sources reported that Ukrainian forces repelled Russian assaults within 37km southwest of Avdiivka near Krasnohorivka, Vodyane, Pervomaiske, Marinka, Nevelske, and Novomykhailivka, and within 6km northeast of Avdiivka near Kamianka.[29] The Donetsk People’s Republic (DNR) People’s Militia claimed that the DNR “Sparta” and “Somalia” Battalions repelled a Ukrainian counterattack near Vodyane.[30] The Russian MoD claimed that Russian forces also repelled Ukrainian counterattacks near Novomykhailivka.[31] A Russian milblogger claimed that Ukrainian and Russian forces continued to fight in the western part of Marinka.[32] 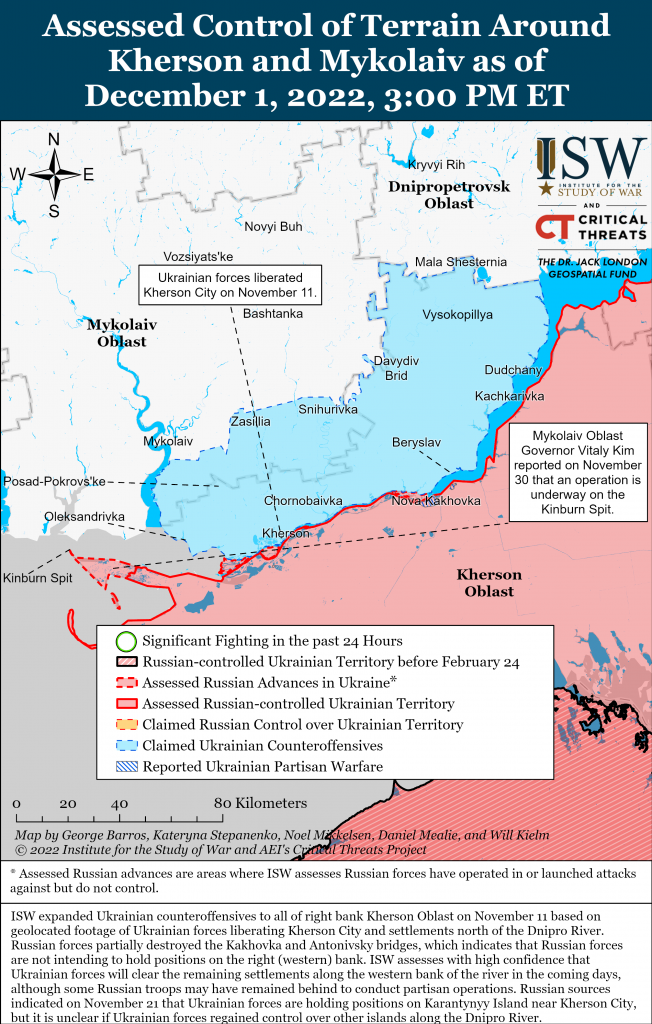 Russian forces are holding reserves in Crimea to support defensive operations in Zaporizhia Oblast and on the east bank of the Dnipro River in Kherson Oblast. Hromov stated that Russian forces are concentrating reserves in northern Crimea to reinforce troops on the east bank in Kherson Oblast and in the direction of Orikhiv in Zaporizhia Oblast.[44] Hromov stated that Dzhankoy and surrounding settlements have become the largest Russian military base in Crimea due to the amount of Russian military personnel and equipment transfers and deployments.[45] Russian forces may be holding reserves to support these sections of the front in Ukraine in the expectation that Ukrainian forces may conduct offensive operations in these areas soon.

The Kremlin’s financial strain continues to feed domestic unrest. A Russian source shared footage that shows Oleg Mikhailov, a deputy from the Russian Communist Party, proposing to increase the payments to veterans at a government meeting in Komi Republic, to a hostile audience of his United Russia party peers.[50] This event exemplifies the growing rift between Russian nationalist parties under increasing economic strain. The Financial Times also reported on November 29 on the growing disenchantment of Russian businesses, reporting that unnamed owners and executives of large Russian companies stated that they believe mobilization would have been handled better if entrusted to businesses rather than the government.[51] Independent Russian media outlet ASTRA reported that more than 100 mobilized personnel from Moscow Oblast did not receive promised payments.[52] ASTRA reported that a unit stationed in Belarus related that of its 408 members, 108 did not receive any payments in October and 200 did not receive full payments.[53]

Wagner Group financier Yevgeniy Prigozhin continued attempts to bolster the Wagner Group’s reputation. Western media reported on November 29 that the United States is considering designating Wagner Group as a foreign terrorist organization.[54] Prigozhin responded by claiming that Wagner does not fit the criteria of a terrorist organization, while the United States clearly does.[55] Prigozhin proceeded to tout Wagner’s successes by falsely claiming that the Wagner Group defeated the Islamic State in Syria, stopped the (nonexistent) “genocide” of Russians in the Donetsk People’s Republic, prevented Western-funded terrorists from staging coups in Africa, and, notably, won a trial against the United States in the District of Columbia concerning Russian interference in the 2016 elections.[56] A Wagner-affiliated Russian milblogger claimed that the Wagner Group’s training facility in the Russian Federation is designed to provide an accelerated three-week training course for new members.[57] Russian sources shared video footage purportedly showing Wagner Group recruits training in Molkin, Krasnodar Krai, and in Belgorod and Kursk Oblasts, under the tutelage of experienced Wagner Group fighters.[58]

The Russian military continues to contend with low morale and high rates of desertion and refusals to fight among its forces. The Ukrainian General Staff Deputy Chief Oleksiy Hromov reported that Russian forces have had to reinforce multiple regiments in Kherson Oblast with more mobilized personnel due to the high number of deserters and mobilized soldiers who refuse to fight.[63] Hromov also added that Russian security forces have reported an increased number of deserters in Luhansk Oblast – many of whom are now attempting to cross the border back into Russia and are being detained by security services in the dozens.[64] Independent Russian media outlet ASTRA reported that Russian forces have held around 90 of the mobilized personnel who refused to fight in Luhansk Oblast at Beryozka children's camp in the village of Makarove, Luhansk for over a month.[65] A Russian local media page in Magnitogorsk reported on November 29 that family members of Magnitogorsk mobilized personnel who refused to fight are appealing to the Prosecutor’s office in an attempt to keep their family members from returning to the front.[66] The media page stated that the military leadership abandoned Magnitogorsk mobilized personnel on the front, causing them to retreat from their positions but not desert them.[67] Hromov reported that Russian forces are continuing to inflict friendly fire upon themselves and stated that a Russian artillery unit shelled a position of the 1st Army Corps on the southwestern outskirts of Tsukura, Kherson Oblast, on November 24.[68]

Russian occupation officials continued efforts to integrate occupied territories into the Russian financial and legal spheres. Zaporizhia Oblast Occupation Deputy Vladimir Rogov stated that occupation officials in Zaporizhia Oblast plan to pull Ukrainian hryvnias from circulation on January 1, 2023.[69] Rogov declared that all enterprises in Zaporizhia Oblast have until the end of 2022 to exchange their hryvnias for rubles.[70] Donetsk People’s Republic (DNR) Head Denis Pushilin stated that only Russian federal legislation can regulate mobilization protocols including restriction of movement within the occupied Donetsk Oblast.[71] Kherson Oblast Occupation Head Vladimir Saldo claimed that occupation authorities, by Russian President Vladimir Putin’s order, are working to simplify the process for obtaining housing certificates for legal residents of occupied Donetsk and Luhansk oblasts who had sought refuge in Kherson City prior to Russian withdrawal from the city.[72]

Russian occupation authorities are continuing to face administrative problems. The Ukrainian Resistance Center reported that half of the residential buildings in the Luhansk and Donetsk oblasts are without heat, partly due to a lack of personnel and water supplies.[73] The Ukrainian Resistance Center added that the mass mobilization of men in occupied areas of Donbas ignited personnel shortages.[74] Zaporizhia Oblast Occupation Head Yevheny Balitsky reported that occupation officials in the Zaporizhia Oblast are giving residents free coal, presumably in an effort to resolve the heating issue.[75]

Russian forces are reportedly continuing to exploit Ukrainian civilians and civilian infrastructure to support their war efforts throughout Ukraine. The Ukrainian Resistance Center reported that occupation officials are demanding money from Crimean teachers to sponsor the Russian war effort.[76] The Ukrainian General Staff and Ukrainian authorities reported that Russian forces continue to use civilian facilities and abandoned homes across the occupied territories, and have set up a field hospital in a school in the Zaporizhia Oblast.[77]