Russian and Ukrainian forces traded accusations of dangerous shelling at the Russian-occupied Zaporizhzhia Nuclear Power Plant (NPP) on August 6 continuing the exchange of accusations ISW reported on August 5.[1] ISW cannot independently determine which party is responsible for the incident. Ukrainian President Volodymyr Zelensky condemned the alleged Russian shelling as an "open, brazen crime” and “an act of terror.”[2] He called on the international community to designate Russia as a state sponsor of terrorism and to sanction Russia’s nuclear industry. [3] Both sides claimed that the shelling caused a fire at the hydrogen station at the plant. The Russian-appointed head of the Zaporizhia Oblast Occupation Administration, Evgeniy Balitskyi, claimed on August 5 that Ukrainian forces “decided to put the whole of Europe on the brink of a nuclear catastrophe” by shelling the plant.[4] The Ukrainian head of the Zaporizhia Oblast Military Administration, Oleksandr Starukh, claimed on August 6 that Russian forces are trying to “provoke” Ukrainians into shelling the NPP to make the West hesitant to provide weapons to Ukraine.[5]

ISW previously assessed on August 3 that Russian forces are likely using the NPP to play on Western fears of a nuclear disaster in Ukraine in an effort to degrade Western will to provide military support to a Ukrainian counteroffensive, while also effectively using the plant as a nuclear shield to prevent Ukrainian strikes on Russian forces and equipment.[9]

Note: ISW does not receive any classified material from any source, uses only publicly available information, and draws extensively on Russian, Ukrainian, and Western reporting and social media as well as commercially available satellite imagery and other geospatial data as the basis for these reports.  References to all sources used are provided in the endnotes of each update. 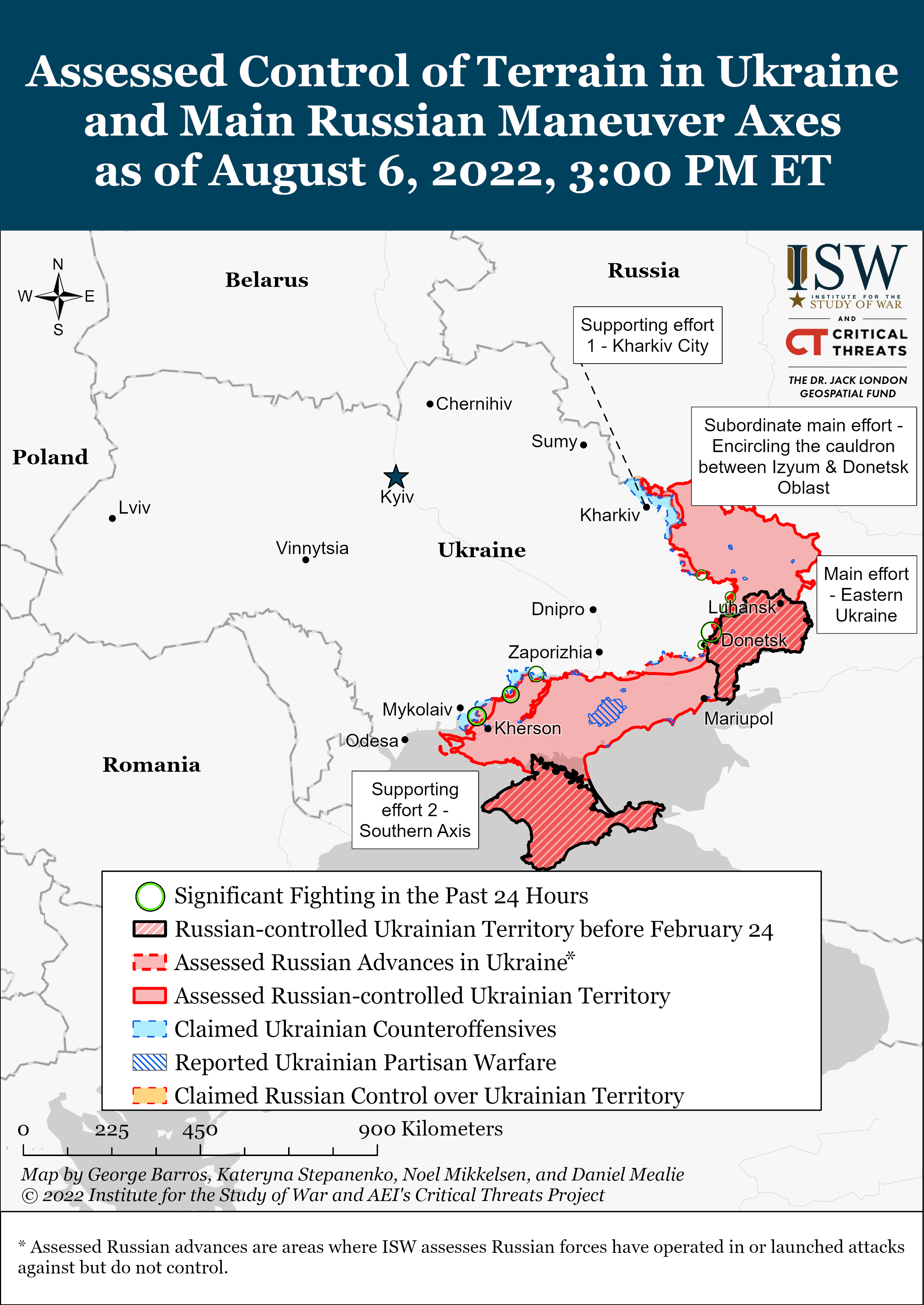 Russian forces conducted a limited ground attack northwest of Slovyansk and otherwise shelled settlements along the Izyum-Slovyansk line on August 6. The Ukrainian General Staff reported that Russian troops tried and failed to advance on the western outskirts of Bohorodychne, about 17km northwest of Slovyansk.[10] Russian forces continued artillery strikes on settlements along the Kharkiv-Donetsk Oblast border, including Mazanivka, Adamivka, Kurulka, Dibrovne, Dovhenke, Krasnopillya, and Dolyna.[11]

Russian forces did not conduct any confirmed ground attacks on Siversk and continued to shell Siversk and surrounding settlements on August 6.[12] Social media posted to Twitter on August 5 showed elements of the Russian 55th Motorized Rifle Brigade of the 41st Combined Arms Army of the Central Military district reportedly operating in the direction of Siversk.[13] This imagery seemingly confirms that elements of Russian Colonel General Aleksandr Lapin’s “Central Group” of forces are still operating in northeastern Donetsk Oblast near the Luhansk Oblast border, as ISW has previously reported.[14]

Russian forces conducted a series of ground attacks in an attempt to break through Ukrainian lines of defense in the Avdiivka-Donetsk City area on August 6. The Ukrainian General Staff reported that Russian forces unsuccessfully attempted to penetrate Ukrainian defenses north of Donetsk City in the Spartak-Avdiivka, Novoselivka Druha-Krasnohorivka, and Lozove-Nevelske directions.[18] Russian troops also attempted to push west of their positions near Oleksandrivka towards Maryinka, about 5km west of the Petrovskyi district of Donetsk City.[19] Ukrainian sources additionally refuted Russian claims that Russian forces have full control over Pisky, and geolocated footage of Donetsk People’s Republic (DNR) soldiers in Pisky indicates that Russian troops likely only control the southeastern outskirts of Pisky.[20] 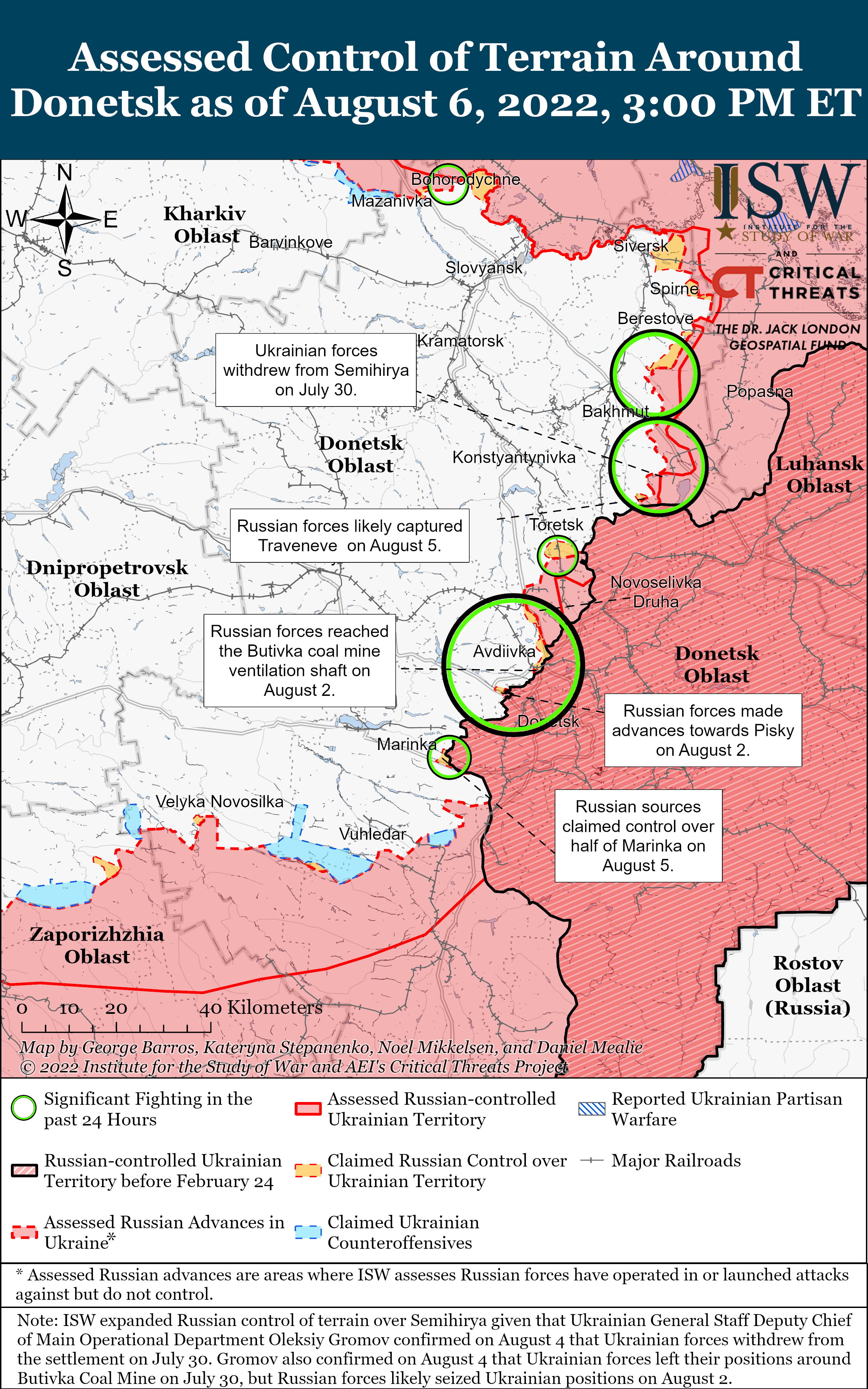 Russian forces did not conduct any confirmed ground attacks in northeastern Kharkiv Oblast and shelled Kharkiv City and surrounding settlements on August 6.[23] 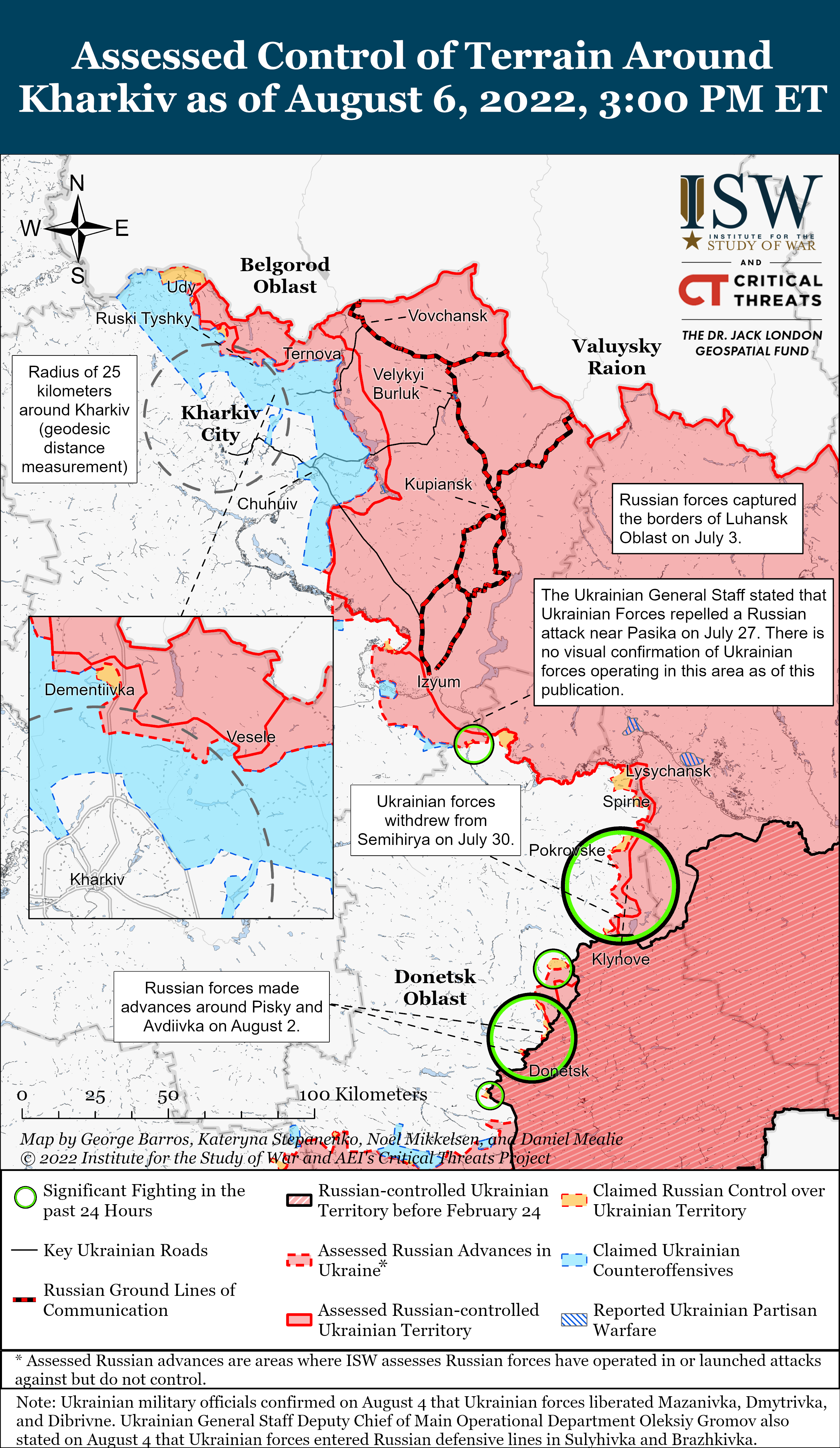 Russian forces did not conduct offensive operations in southern Ukraine and focused on defending their occupied positions with aviation and artillery. Ukrainian military officials reported that Russian forces continued to launch airstrikes near Andriivka, situated on the eastern Inhulets River’s bank near the Ukrainian bridgehead.[24] Russian forces also continued aerial reconnaissance near the bridgehead and maintained artillery fire along the contact line in Kherson Oblast.[25] The Ukrainian Southern Operational Command stated that Russian forces are rotating manpower and redistributing equipment in unspecified directions in Kherson Oblast but noted that the composition of Russian troops in the area has not changed as of August 5.[26] Russian forces launched rockets at Nikopol, Zaporizhia City, and Mykolaiv City from MLRS systems.[27] Social media footage also showed Russian forces transporting a Buk air defense system near Pryazovske, southeast of Melitopol, on an unspecified date.[28]

Ukrainian military officials confirmed several strikes at Russian strongholds and ammunition depots throughout Kherson Oblast. The Ukrainian Southern Operational Command stated that Ukrainian missile units destroyed two Russian control points belonging to the 76th Airborne Assault Division and the 49th Combined Arms Army in Chornobaivka (about 5km northwest of Kherson City), a command and observation post of an unspecified battalion tactical group (BTG) in Bruskinske along the T2207 highway, and an ammunition depot in Oleshky southeast of Kherson City.[29] Ukrainian local officials noted that Russian forces are continuing to accumulate large quantities of military equipment in  Oleshky, likely in preparation to defend logistics routes to Kherson City and to establish defensive positions on the left bank of Dnipro River.[30] Social media users published footage of a large smoke cloud coming from Skadovsk (approximately 62km south of Kherson City), but Ukrainian officials have not confirmed any Ukrainian attack on that location as of the time of this publication.[31] 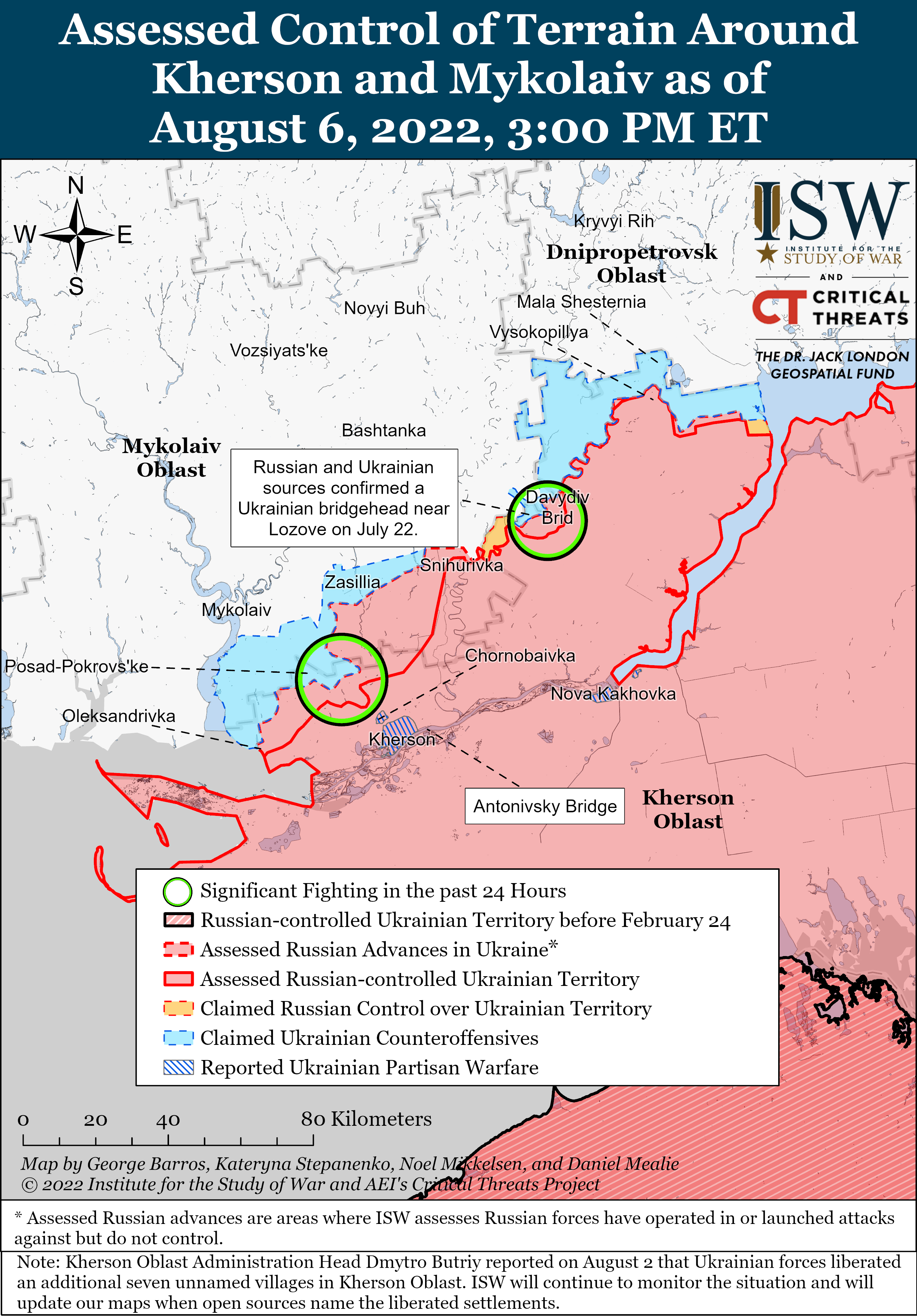 Existing Russian military units and the Russian National Guard (Rosgvardia) are continuing to recruit volunteers to reinforce existing military units. Caucasus region-focused outlet Kavkaz Uzel reported that Russian forces distributed leaflets and established a day-long recruitment drive in Nazran, Republic of Ingushetia, to recruit volunteers for the existing 503rd Motorized Rifle Regiment of the 58th Combined Arms Army.[32] Russian forces reconstituted the 503rd Regiment in July 2021, after it had been dismantled in 2009 during the military reforms.[33] Rosgvardia also posted job listings for riflemen and drivers in the Republic of Ingushetia offering starting monthly salaries of 45,000 to 50,000 rubles (about $750 to $820) with a requirement to be ready to participate in the “special military operation” in Ukraine. The Republic of Dagestan also posted explosives expert positions with a requirement for “a desire to serve in the Russian Armed Forces.” Stavropol and Krasnoyarskiy Krai both listed on employment portals several military positions such as UAV operator with the requirement to travel for ”business trips.” Such recruitment drives indicate that Russian leaders are seeking to exploit different security services to generate more volunteers for the ”special military operation.” The drives also suggest that volunteer recruitment is not limited to newly forming volunteer units.

ISW identified additional Russian federal subjects (regions) that are recruiting personnel for volunteer battalions to participate in the Russian invasion of Ukraine. Local media outlets reported that Khanty-Mansi Okrug and Voronezh and Smolensk Oblasts are forming volunteer battalions and offering one-time enlistment payments ranging between 100,000 and 250,000 rubles (about $1,650 to $4,130).[34] Smolensk Oblast officials created the ”Feniks” volunteer battalion Telegram channel on July 27 and announced recruitment of men ages 18 to 60 in the region for a minimum six-month service period.[35] Khanty-Mansi Okrug announced the formation of two unnamed volunteer battalions also requiring a minimum contract time period of six months.[36] Voronezh Oblast promised recruits of an unspecified volunteer battalion monthly salaries of at least 256,000 rubles (about $4,200) if the servicemen serve in the combat zone.[37] 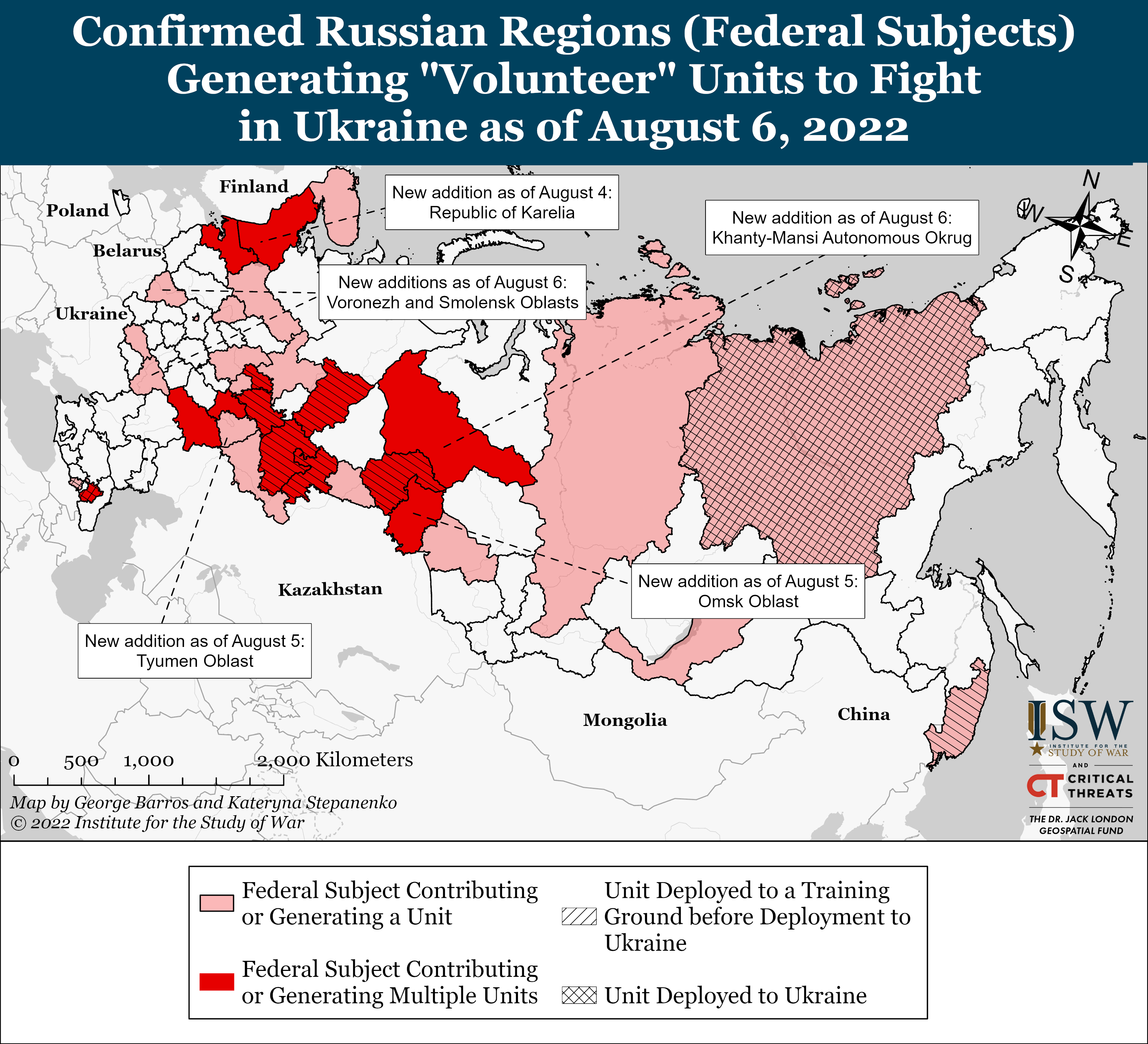 Ongoing Ukrainian partisan activity and civilian resistance are frustrating Russian occupation forces and may lead to additional crackdowns on occupied civilians. Unknown people shot and killed the deputy head of the Russian administration in charge of the housing and utility sector in Nova Kakhovka, Kherson Oblast, Vitaly Gura, on August 5.[38] Gura died in the hospital on August 6. Russian milblogger Daniil Bezsonov claimed that Ukrainian partisans were responsible.[39] Ukrainian Advisor to the Kherson Military Administration Serhiy Khan warned that ”Gura’s fate will reach all collaborators” but did not directly attribute the attack to partisans.[40] Ukrainian Telegram channel MariupolNow reported that partisans took responsibility for an explosion at the Russian-controlled police station in Berdyansk, Zaporizhia Oblast on August 6.[41] The Ukrainian Resistance Center reported on August 4 that Russian occupation forces harassed the staff of a construction materials store in occupied Kherson, but that the staff refused to work for Russian occupation forces.[42] The Ukrainian Resistance Center also reported both attacks on August 6 and said “The Center for National Resistance notes that collaborationism is bad for your health.”[43]

Russian state media advocated for the introduction of labor camps, repression, and the shooting of Ukrainian partisans and civilians who refuse to cooperate with Russian-appointed officials in occupied Ukrainian territories. Kremlin-affiliated outlet Komsomolskaya Pravda host Sergey Mardan encouraged an unnamed occupation authority that he interviewed on his show to recreate gulags (the notorious Soviet prison/labor camp system), confiscate private property, and shoot local teachers and partisans for refusing to cooperate with Russian-appointed authorities.[44] The majority owner of Komsomolskaya Pravda, Sergey Rudnov, is the son of Oleg Rudnov, a childhood friend of Russian President Vladimir Putin.[45] The unnamed occupation official also acknowledged that Russian authorities have been facing severe challenges with partisan activity, specifically noting an occasion when partisans disabled the electronic control units of unspecified equipment. The interview confirms Ukrainian official reports of partisan activity and the refusal of Ukrainian specialists to cooperate with occupation authorities.

Meanwhile, Russian occupation forces continue to prepare for the integration of occupied territories into the Russian Federation following their sham annexation referenda. The Ukrainian Resistance Center reported on August 6 that Russian authorities seized the Suspline Kherson TV branch, likely to establish pro-Russian broadcasters in advance of the referenda, and renamed it the Tavriia channel.[46] The Tavriia (or Tauride) Gubernia was a historical province of the Russian Empire and is a possible administrative structure for parts of occupied Kherson and Zaporizhia oblasts that could fold them into a Russian republic that may also include Russian-occupied Crimea.[47] The Center reported that the majority of the TV channel staff refused to cooperate, so Russian forces appointed a ”cleaning lady” as channel director and imported propagandists from St Petersburg to open a ”media school” to teach all ”willing” people how to be journalists, cameramen, and editors for the occupation administration-run channel. Russian state-affiliated news outlet TASS reported that Russian occupation forces will begin issuing Russian license plates in Kherson Oblast with region code 184 and will require residents to have Russian passports to acquire legal license plates.[48] ISW previously reported that Russian occupation authorities are dramatically expanding their passportization of occupied Ukrainian territories by requiring Ukrainian civilians to acquire Russian passports to participate in basic life activities.[49] The Russian head of the Zaporizhia Occupation Administration, Yevheny Balitsky, stated on August 5 that the Zaporizhian rail lines will become “part of a big network of Russian railways,” demonstrating Russian plans for increasingly overt integration with the Russian Federation.[50]