The volunteer battalions constituting Russia’s 3rd Army Corps will likely deploy to Ukraine in ad hoc combined arms units to renew offensive operations, possibly on the Donetsk City axis and the Southern Axis. The volunteer battalions Russia has been forming have been divided into two general groups, as ISW has previously reported. Some battalions are deploying to the front lines as soon as they have completed their abbreviated initial training. Others have been coalescing into a new 3rd Army Corps.[i] An analysis by Janes Intelligence Group of new images from combat training for elements of the 3rd Army Corps at the Mulino Training Ground in Nizhny Novogorod found 3rd Army Corps troops training with more modern Russian equipment such as BMP-3 infantry fighting vehicles, T-80BVM and T-90M tanks, and the latest AK-12 assault rifle variants.[ii] The other Russian volunteer battalions that have fought in Ukraine, such as the North Ossetian “Alania” Battalion, CorrectionA previous version of the text incorrectly stated "have not entered combat." have entered combat with older equipment. The fact that the 3rd Army Corps units are training on better gear and apparently being held back to deploy in more coherent combined arms groups suggests that the Russian military intends to commit them to offensive operations and hopes to regain momentum somewhere along the front line. Elements of the 3rd Army Corps are reportedly already deploying from Nizhny Novgorod closer towards Russia’s border with Ukraine. The Georgia-based Conflict Intelligence Team (CIT) observed T-80BV and T-90M tanks that were in Mulino likely of the 3rd Army Corps deploy to Rostov Oblast on August 27.[iii] If this report is correct, it could suggest that the Russian military intends to commit the 3rd Army Corps to reinforce offensive operations near Donetsk City, where drives around Mariinka, Pisky, and Avdiivka have been stalling after making some gains. Elements of the 3rd Army Corps may also deploy to the Southern Axis. A Russian Local media outlet reported that the Khabarovsk Krai “Baron Korf” signals battalion will support the deployment of Russian field posts in Kherson Oblast and provide command and control to the new Russian 3rd Army Corps, indicating the Kremlin will likely deploy 3rd Army Corps elements to Kherson and Ukraine’s south.[iv]

Ukraine’s Southern Operational Command stated that a 10-person Russian sabotage and reconnaissance group attempted assault operations in Kherson Oblast on August 27, suggesting that Russian offensive capabilities in Kherson Oblast have degraded even further. [ix] A 10-person group amounts to a squad, which is too small to act effectively as a maneuver unit. If the Southern Operational Command correctly reported the size and mission of this unit, it would indicate that Russian ground forces in Ukraine have degraded to the point that they are attempting to conduct offensive operations and echelons too low to make meaningful gains. ISW has no independent confirmation of the current size of Russian assault echelons attempting ground attacks in Ukraine, but this report is consistent with the Ukrainian campaign to degrade Russian logistics capabilities in western Kherson Oblast and ISW’s prior assessments of diminished Russian military morale in Ukraine.[x] 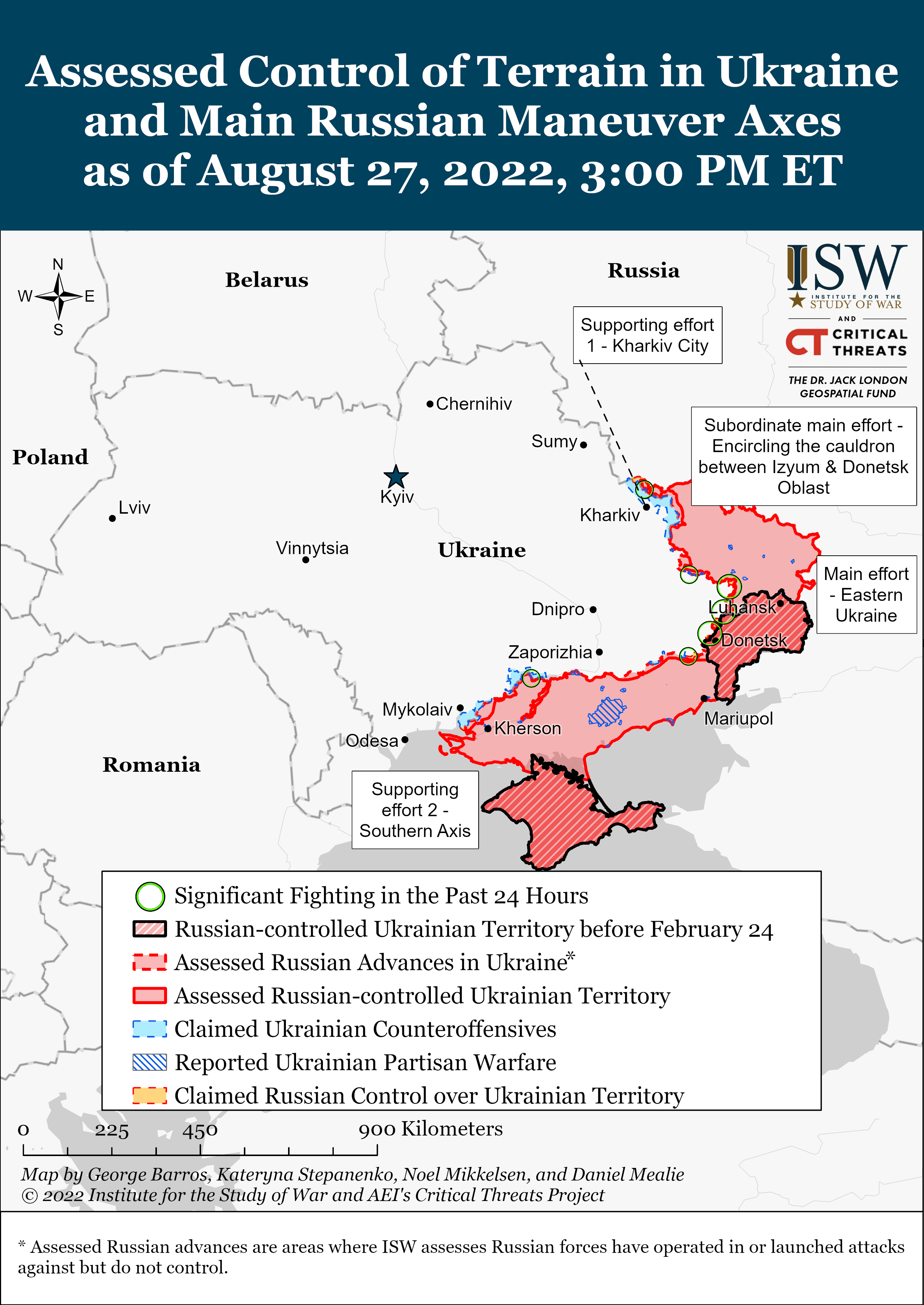 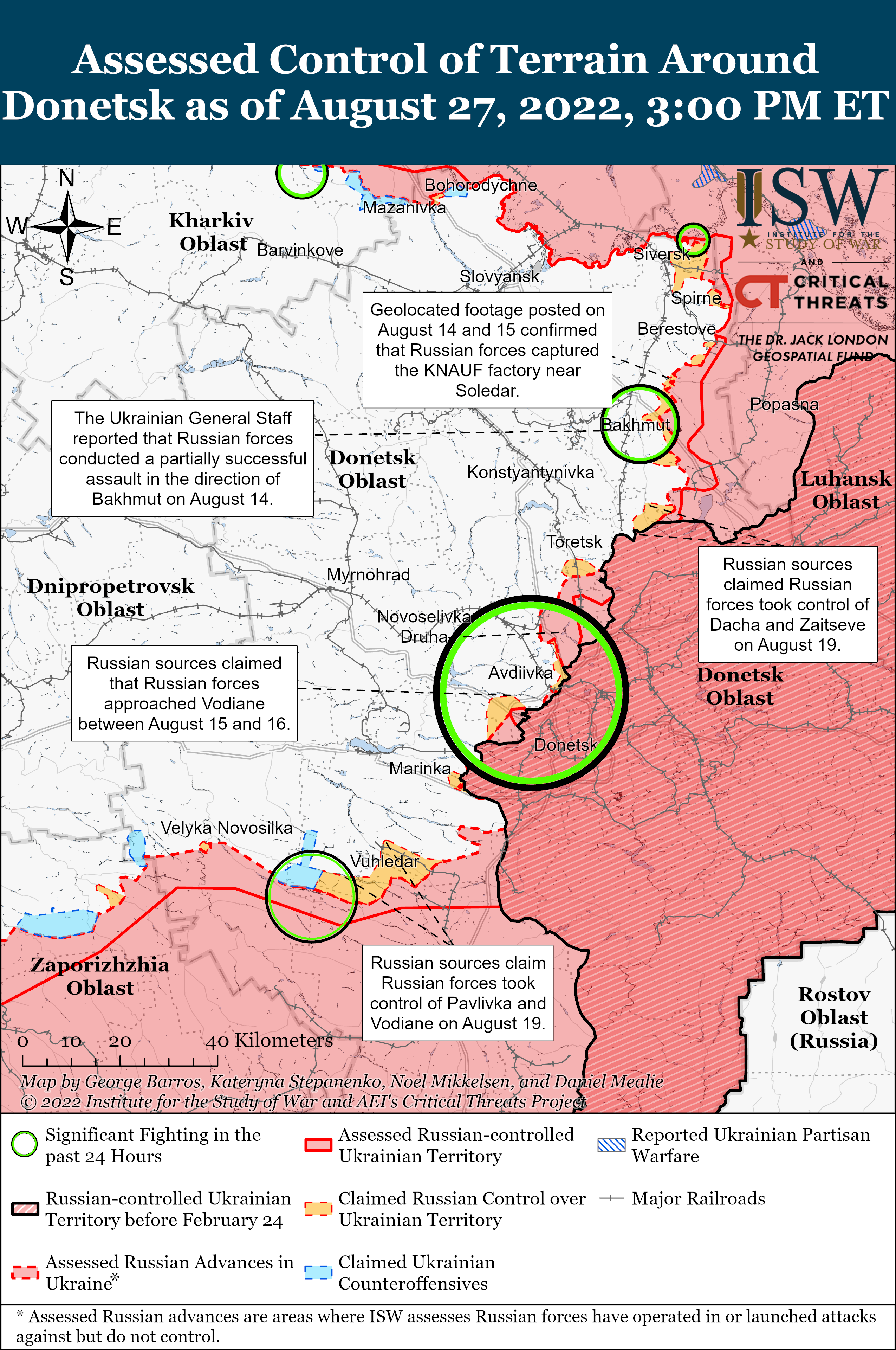 Russian forces conducted a limited ground attack southwest of Izyum on August 27. The Ukrainian General Staff reported that Russian troops attempted to advance in the direction of Brazhkivka, about 15km southwest of Izyum.[xi] Russian forces additionally continued artillery strikes and aerial reconnaissance along the Izyum-Slovyansk line and conducted a rocket strike directly on Slovyansk. [xii]

Russian forces conducted a limited ground attack northeast of Siversk on August 27. The Ukrainian General Staff reported that Russian troops attempted to launch an offensive towards Siversk from the area of Hryhorivka, about 10km northeast of Siversk.[xiii] The UK Ministry of Defense additionally noted that Russian forces have engaged in heavy fighting around Siversk in the past week as part of intensified offensive operations in Donetsk Oblast.[xiv] Russian troops continued air and artillery strikes on Siversk and its surrounding environs.[xv]

Russian forces continued ground attacks northeast and south of Bakhmut on August 27. The Ukrainian General Staff stated that Ukrainian troops repelled Russian assaults in Soledar, 10km northeast of Bakhmut.[xvi] Russian troops also reportedly attempted to advance from Mayorske and Zaitseve on the outskirts of Horlivka, about 20km southwest of Bakhmut.[xvii] The Ukrainian General Staff noted that “separate elements” (”Окремі підрозділи” - a term meaning elements at an echelon at or below a battalion) are active in the overall Bakhmut area, which suggests that Russian forces are operating in piecemeal sub-battalion formations around Bakhmut.[xviii] This report is consistent with previous reporting that advances towards Bakhmut are being led by elements of proxy and Wagner Group forces, as opposed to larger and more coherent battalion-level groups.[xix] 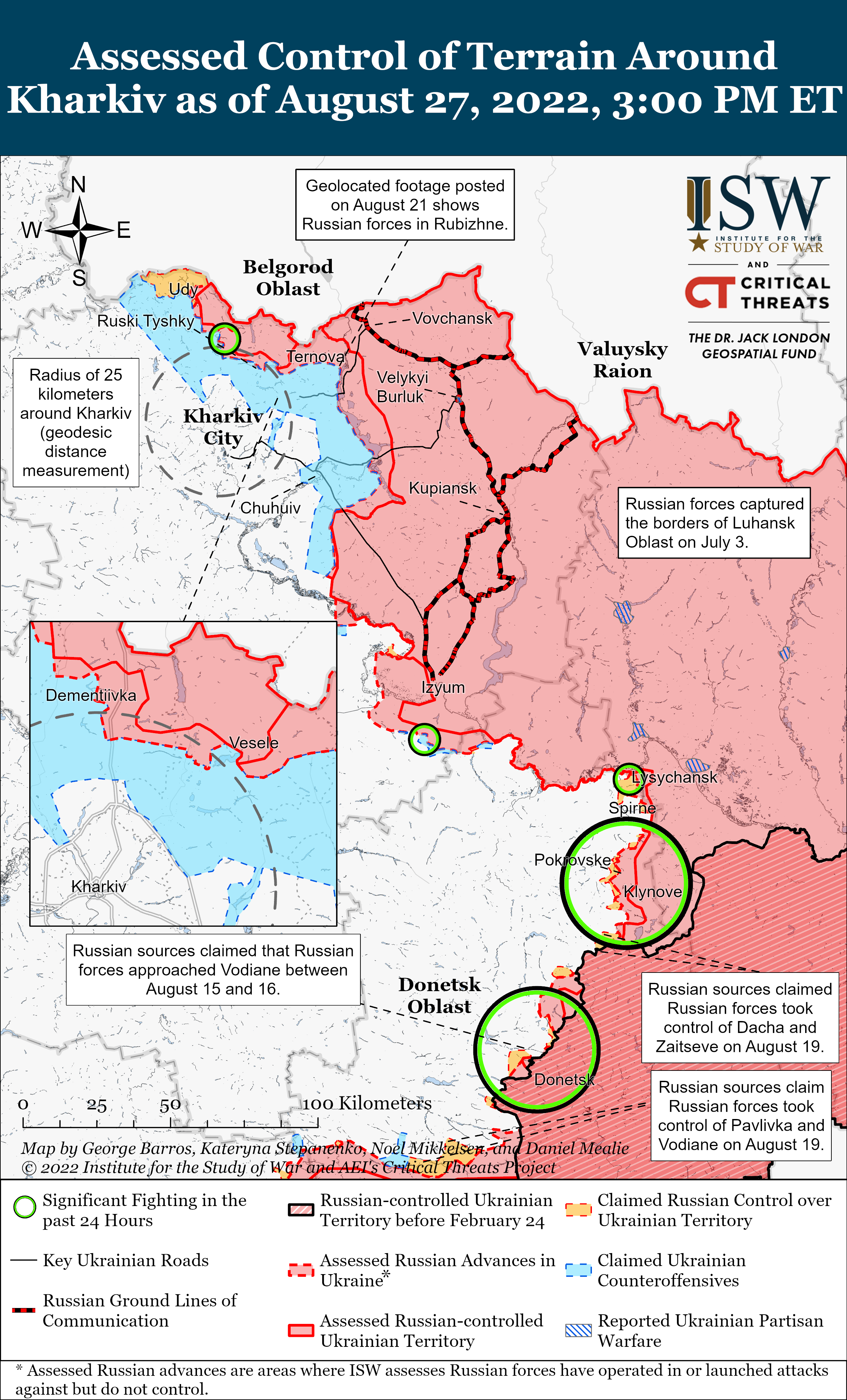 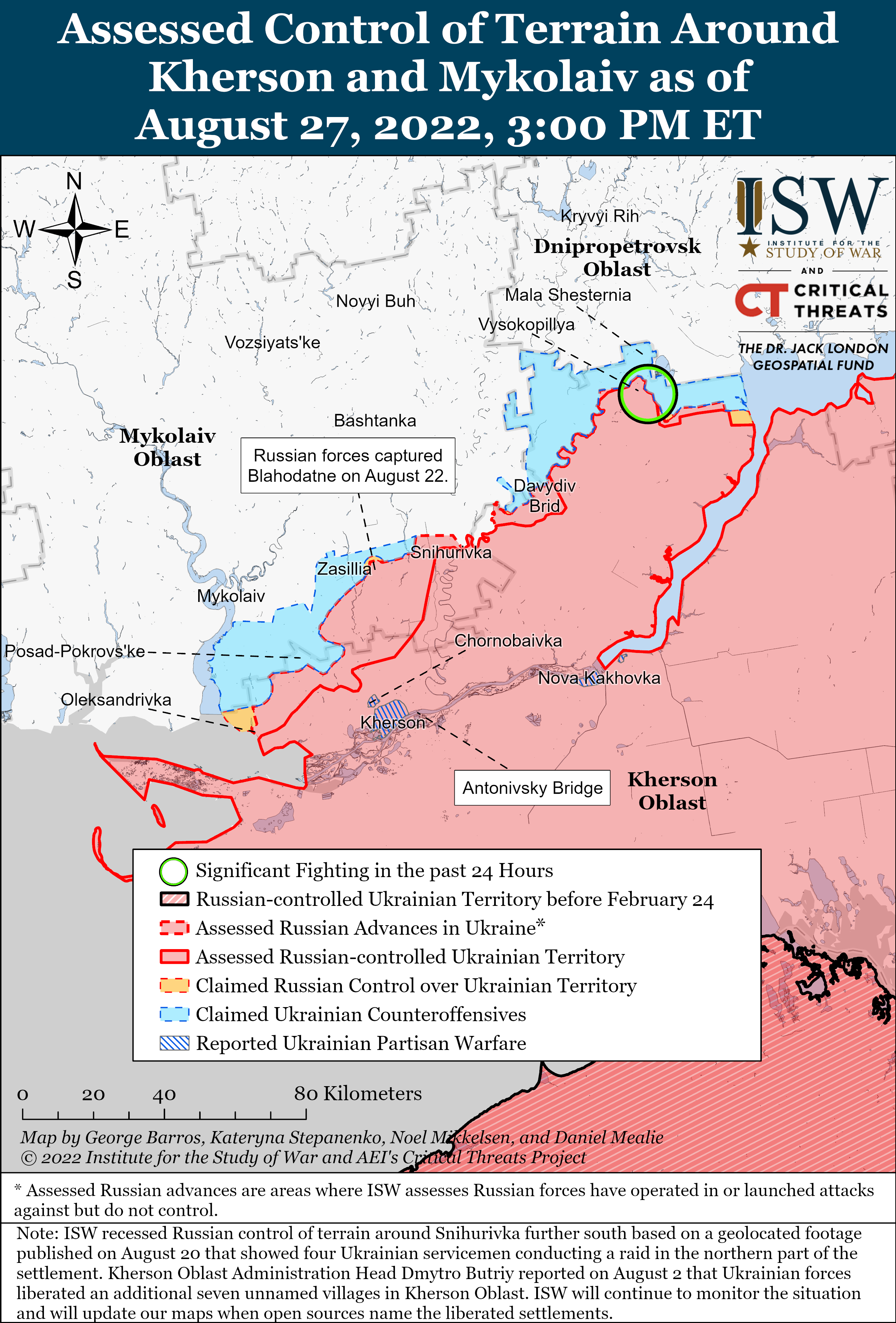 Ukrainian forces targeted Russian military command-and-control (C2) elements in northwestern Kherson Oblast, likely as part of the campaign to degrade Russian military capabilities on the right bank of the Dnipro River. Ukraine’s Southern Operational Command reported that Ukrainian forces struck C2 points of Russian battalion tactical groups (BTGs) of the 11th and 83rd Separate Airborne Brigades in Novovoznesenske (just south of Vysokopillya) and Dudchany (on the right bank of the Dnipro River 27 kilometers southwest of Osokorovka).[xxvii] Ukraine’s Southern Operational Command reported that damage to the Antonivsky and Darivka bridges into western Kherson Oblast have made them impassable for heavy equipment.[xxviii] Satellite imagery and footage of the Antonivsky and Kakhovka Hydroelectric Power Plant dam road bridges shows significant damage that will likely make repairing them difficult.[xxix]

Russian and Ukrainian sources again traded accusations of shelling the Zaporizhzhia Nuclear Power Plant (ZNPP) on August 27. Ukraine state nuclear energy agency Energoatom stated that Russian forces have repeatedly shelled the ZNPP over August 26-27, resulting in numerous fire and radioactive safety risks.[xxxiii] The Russian Defense Ministry (MoD) claimed that Ukrainian forces shelled the ZNPP grounds near nuclear storage facilities.[xxxiv] The Russian MoD still has not provided photographic or video evidence of damage at the ZNPP to support its claims that Ukrainian forces are striking the ZNPP. Russian authorities should be able to provide such evidence as Russian forces currently control the ZNPP’s territory.

Russian military leadership may be shifting to a new phase of mobilization after having exhausted recruitment efforts and sources of combat power on Russia’s geographic and socioeconomic periphery. Spokesperson for the Ukrainian Main Intelligence Directorate (GUR) Vadym Skibitsky stated on August 27 that the Moscow, Leningrad, and St. Petersburg areas are increasingly generating forces, whereas previously the onus for volunteer mobilization largely has fallen on more economically depressed and peripheral regions in eastern Russia.[xlv] The GUR similarly reported that the Kremlin has effectively exhausted mobilization potential in Tuva, Buryatia, republics of the Caucasus, and other ethnic minority enclaves that ISW has previously assessed were bearing the brunt of mobilization efforts.[xlvi] The GUR noted that the Kremlin has directed the heads of Russian federal subjects (regions) in more western and well-off regions to lead regionally based recruitment campaigns and that the majority of recruits in Moscow Oblast are contracting into the 1st Guards Tank Army.[xlvii] As the onus of partial mobilization shifts to more economically advantaged, densely populated, and better-educated regions of Russia, domestic opposition to recruitment efforts will likely grow. Recruitment drives in western Russia remain unlikely to generate significant increases in combat capability.

Russian federal subjects (regions) are continuing efforts to incentivize and train new recruits for service in Ukraine. Social media footage posted on August 27 indicates that the Bashkortostan's “Shaimuratov” volunteer battalion likely deployed to Ukraine between August 25-27.[xlviii] The “Shaimuratov” Battalion announced it was ready to deploy to Ukraine on August 25 and received protective blessings from Russian clergy on August 26.[xlix] Norwegian outlet The Barents Observer reported that the northwestern Russian Republic of Karelia is now offering up to 250,000 rubles ($4,146) per month to recruits.[l] A Russian milblogger reposted a recruitment ad for the “Avanguard” OMON battalion and stated that the starting salary is 75,000 to 80,000 rubles ($1,243-$1,327) per month.[li] OMON is a system of specialized police units within Rosgvardia that typically requires more specialized recruitment, so the advertisement suggests that law enforcement bodies are also struggling to recruit and are broadening their mobilization aperture. Russian outlet News29RU reported on August 26 that veterans established a training center for future soldiers in Arkhangelsk Oblast, which indicates that Arkhangelsk likely lacks the formal infrastructure to facilitate the training of new recruits and relies on informal sources, such as veterans' organizations, to build out combat capacity.[lii]

Russian occupation authorities are continuing to intensify law enforcement efforts in occupied areas in the face of internal tensions and partisan threats. Russian outlet RIA Novosti posted pictures of Russian Spetznaz detachments, possibly from the Special Purpose Center of the Federal State Security Service (FSB), carrying out spot checks and other law enforcement tasks in occupied Kharkiv Oblast.[liii] Russian Telegram channel Baza similarly claimed that police divisions of the Kherson and Zaporizhia occupation administrations are subordinate to the Russian Ministry of Internal Affairs, which indicates that Russian authorities lack confidence in the ability of occupation administrations to provide adequate security to Russian government assets in occupied areas.[liv] First Deputy Head of the Russian Presidential Administration, Sergi Kiriyenko, stated that Russia has additionally allocated law enforcement funds so that every school in occupied areas of Donbas, Kherson, and Zaporizhia has two armed guards on its premises by the start of the school year on September 1.[lv] Kiriyenko indicated that this initiative will be carried out in tandem with Rosgvardia, internal ministries of Russia and the Donetsk and Luhansk People’s Republics (DNR and LNR) and selected private security companies.[lvi] Taken together, these individual data points suggest that Russian authorities are increasingly concerned with securing occupied areas.