Russian President Vladimir Putin’s August 25 decree to increase the size of the Russian military starting in January 2023 is unlikely to generate significant combat power in the near future and indicates that Putin is unlikely to order a mass mobilization soon. The decree increases the nominal end strength of the Russian Armed Forces by 137,000 military personnel, from 1,013,628 to 1,150,628, starting on January 1, 2023.[1] The Russian military likely seeks to recover losses from its invasion of Ukraine and generate forces to sustain its operation in Ukraine. The announcement of a relatively modest (yet likely still unattainable) increased end strength target strongly suggests that Putin remains determined to avoid full mobilization. The Kremlin is unlikely to generate sufficient forces to reach an end strength of over 1,150,000 soldiers as the decree stipulates. The Russian military has not historically met its end-strength targets. It had only about 850,000 active-duty military personnel in 2022 before Russia’s full-scale invasion of Ukraine, for example, well shy of its nominal end strength target of over one million.[2]

Russia would likely face serious obstacles to adding large numbers of new soldiers quickly. Apart from the challenges Russian recruiters face, Russia’s net training capacity has likely decreased since February 24, since the Kremlin deployed training elements to participate in combat in Ukraine and these training elements reportedly took causalities.[3] Russia may use the fall conscription cycle in October 2022, which should bring in about 130,000 men, to replenish Russian losses, which reportedly number in the tens of thousands killed and seriously wounded. The Kremlin may alternatively use the additional end strength to formally subsume into the Russian military the forces of the Donetsk and Luhansk People’s Republics and/or the new Russian volunteer units that are not formally part of the Russian military. The net addition to Russia’s combat power in any such case would be very small.

The Zaporizhzhia Nuclear Power Plant (ZNPP) disconnected from the power grid for the first time in its operational history on August 25. Ukrainian nuclear operating enterprise Energoatom reported that Russian shelling caused the disconnection by starting fires at ash pits near the Zaporizhia Thermal Power Plant (ZTPP), approximately 5km from the ZNPP.[4] Energoatom stated that the ZTPP is currently supplying the ZNPP with power and that work is ongoing to reconnect one of the ZNPP power units back to the Ukrainian power grid.[5]

Russian sources accused Ukrainian forces of firing at the ZNPP, but Russia has not provided clear evidence of Ukrainian troops striking the plant.[6] As ISW has previously reported, Ukraine’s Main Intelligence Directorate (GUR) stated that Russian troops deliberately conducted mortar strikes against the ash pits at the ZTPP.[7] The GUR also has not provided clear evidence to support its claims. The Russians’ failure to provide unequivocal evidence of the extensive shelling they accuse Ukraine of conducting is more noteworthy, however, because Russia controls the ground and could provide more conclusive evidence far more easily than Ukraine could. The GUR also reported on August 20 that Russian officials had indefinitely extended the order for Ukrainian employees of the ZNPP to stay home, and there have been no reports of any rescission of that order, which means that a portion of the ZNPP’s workforce is apparently still absent on Russian orders despite the ongoing emergency.[8] Russian forces have also heavily militarized the ZNPP since its capture, despite the fact that the facility is far from the front line and at no risk of imminent Ukrainian ground attack.  This pattern of activity continues to make it far more likely that Russian forces have been responsible for kinetic attacks on and around the ZNPP than that Ukrainian forces have been. 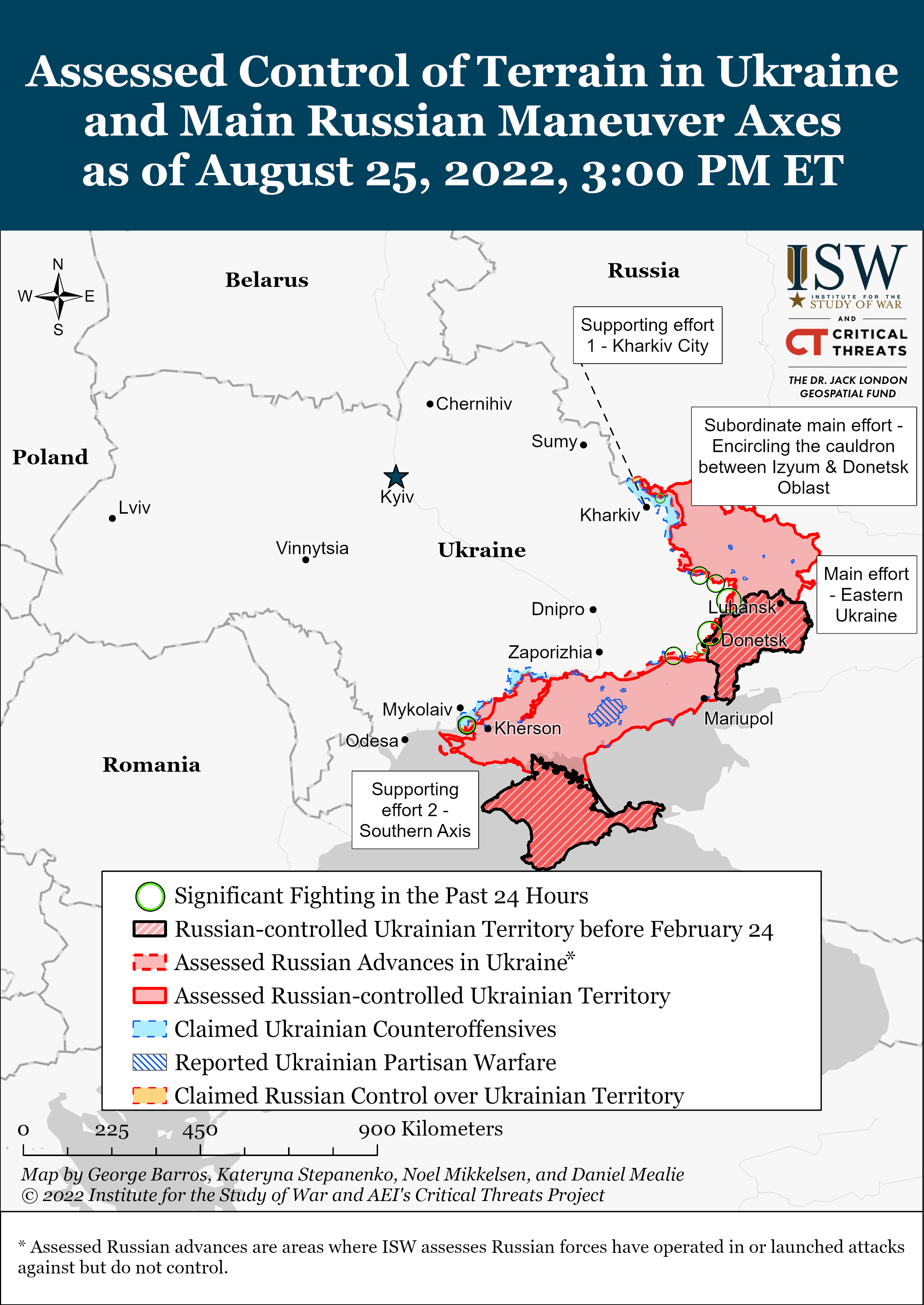 Russian forces conducted limited ground attacks northwest and northeast of Slovyansk on August 25. The Ukrainian General Staff reported that Russian troops attempted to advance from occupied positions in Pasika (25km northwest of Slovyansk) to Dolyna, 18km northwest of Slovyansk along the E40 Izyum-Slovyansk highway.[9] The Ukrainian General Staff also stated that Russian troops attempted to improve their tactical positions around Staryi Karavan, which is in Russian-occupied territory about 13km northeast of Slovyansk along the T0514 highway that runs through Raihorodok into Slovyansk.[10] Russian forces shelled civilian infrastructure in Slovyansk.[11] 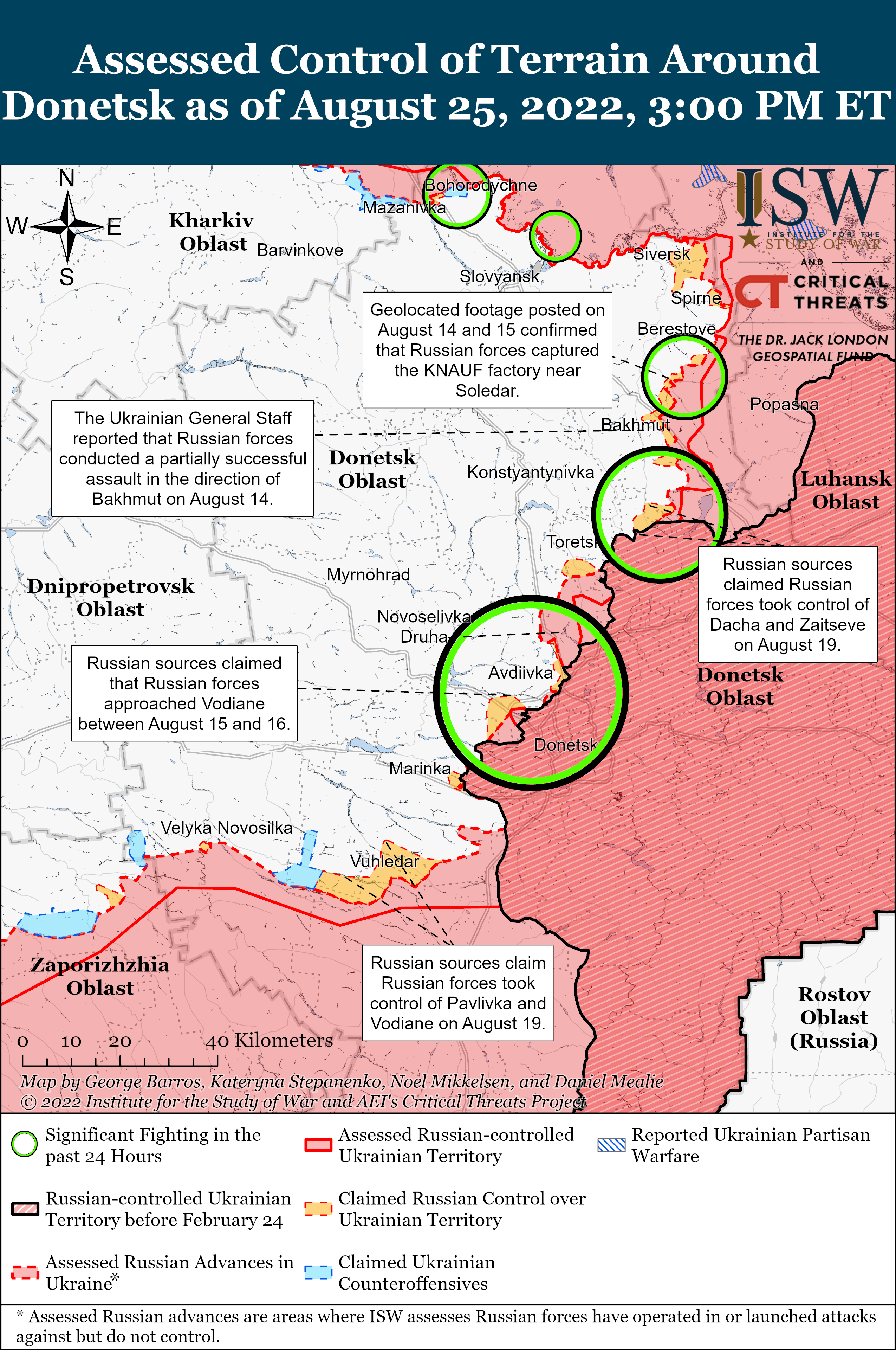 Russian forces did not conduct any confirmed ground attacks towards Siversk on August 25 and shelled Siversk and surrounding settlements.[12]

Russian forces continued ground attacks northeast and south of Bakhmut on August 25. The Ukrainian General Staff stated that Russian troops attempted to advance on Bakhmut from Bakhmutske, 8km northeast of Bakhmut.[13] Russian troops, likely including Wagner Group mercenaries and elements of the Luhansk People’s Republic (LNR) 6th Cossack Regiment are continuing to conduct ground attacks with artillery support around Bakhmut and in Soledar.[14] The Ukrainian General Staff also reported that Russian troops attempted to advance northward from the Horlivka area and conducted a ground attack from Travneve (19km southeast of Bakhmut) to Kodema (14km southeast of Bakhmut) and are fighting around Kodema.[15]

Russian forces conducted a limited ground attack on the northwestern outskirts of Donetsk City on August 25. The Ukrainian General Staff stated that Russian troops attempted to push from Pisky to Pervomaiske and break Ukrainian defensive lines in the Pervomaiske area.[16] Geolocated footage posted on August 24 shows Donetsk People’s Republic (DNR) troops hanging a Soviet flag near the center of Pisky and seemingly unconcerned with Ukrainian artillery fire, which confirms that DNR troops gained full control of Pisky and are likely launching westward attacks from positions in Pisky.[17] Russian forces continued to strike Ukrainian positions along the Avdiivka-Donetsk City frontline.[18]

Russian forces did not conduct any confirmed ground attacks southwest of Donetsk City towards the Zaporizhia Oblast border on August 25. Russian sources claimed that Russian and DNR troops are continuing offensive operations in the Vuhledar area, 35km southwest of Donetsk City. The Ukrainian General Staff stated that Russian forces continued air and artillery strikes near Vuhledar and toward the Zaporizhia Oblast border.[19] 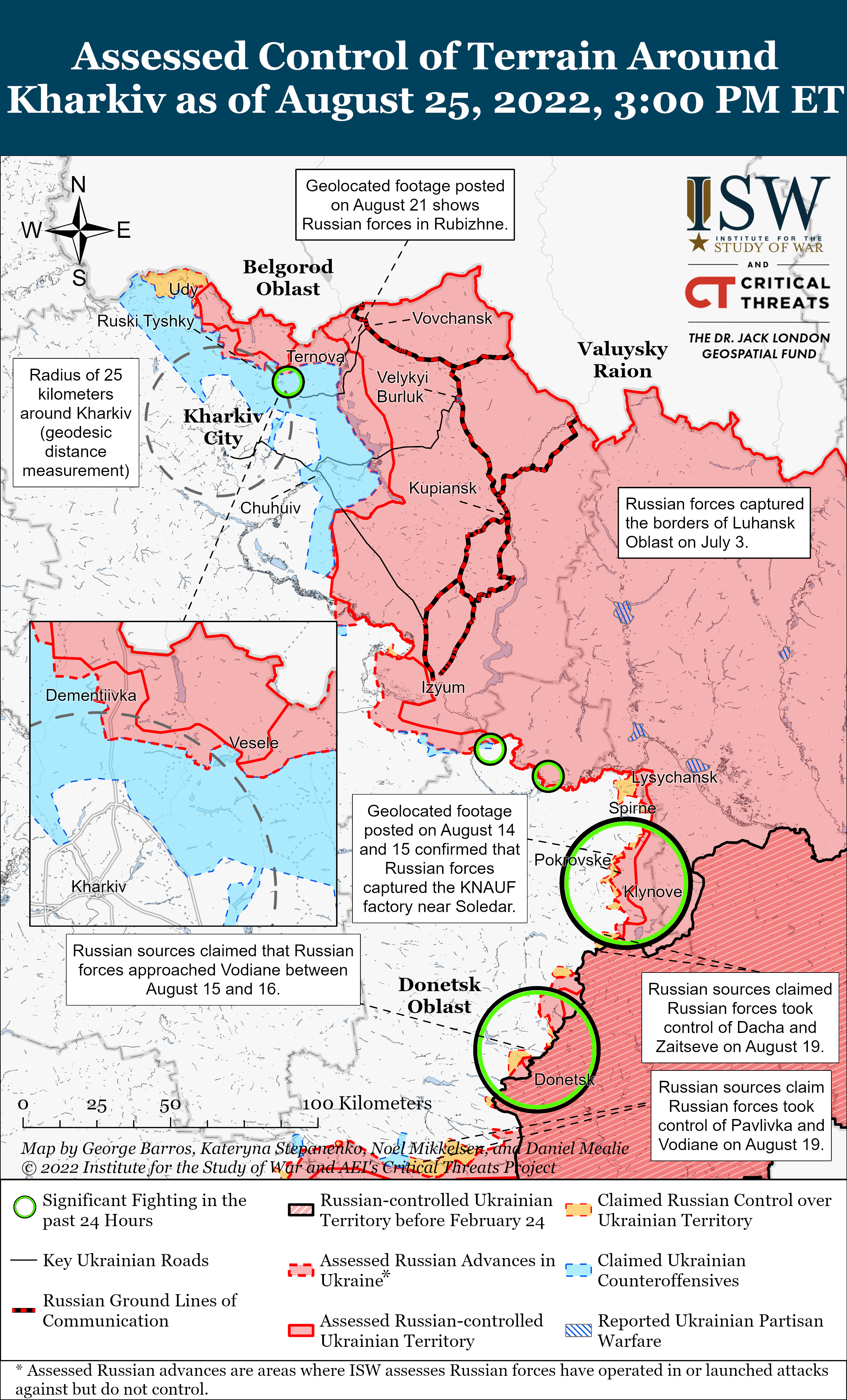 Russian forces conducted limited ground assaults in northwest Kherson Oblast but did not make any territorial gains on August 25. The Ukrainian General Staff reported that Ukrainian forces repelled an attempted Russian offensive near Tavriiske, approximately 38km northwest of Kherson City.[22] The Ukrainian General Staff also reported that Russian forces retreated after attempting a reconnaissance-in-force operation near an unspecified village called Blahodatne.[23] It is unclear whether the report referred to the Ukrainian-held Blahodatne northwest of Russian-occupied Kyselivka or the Blahodatne in southern Mykolaiv Oblast that Russian forces captured around August 21.[24]

Russian federal subjects (regions) are continuing additional recruitment drives for volunteer battalions, which continue to deploy to training grounds ahead of deployment to Ukraine. Russian outlet VladNews reported that Primorsky Krai’s military commissioner announced that 140 people (half of the 280 target) have signed up for Primorsky Krai’s “Arsenyevskyi” volunteer repair battalion.[32] Local Chelyabinsk outlet BezFormata reported that Chelyabinsk’s military commissar is conducting additional recruitment drives for the “Yuzhnouralets” and “Yuzhnyi Ural” volunteer battalions—one of which ISW previously reported has already deployed to a training ground and the other of which is still forming.[33] Local Oryol outlet NewsOrel stated that the “Orlovskyi” volunteer battalion has deployed to a base in Russia prior to deploying to Ukraine on August 25.[34] Russian media also reported that Bashkortostan’s “Shaimuratov” and “Dostavalov” volunteer battalions are completing their training and will deploy to Ukraine at an unspecified date in the near future.[35] 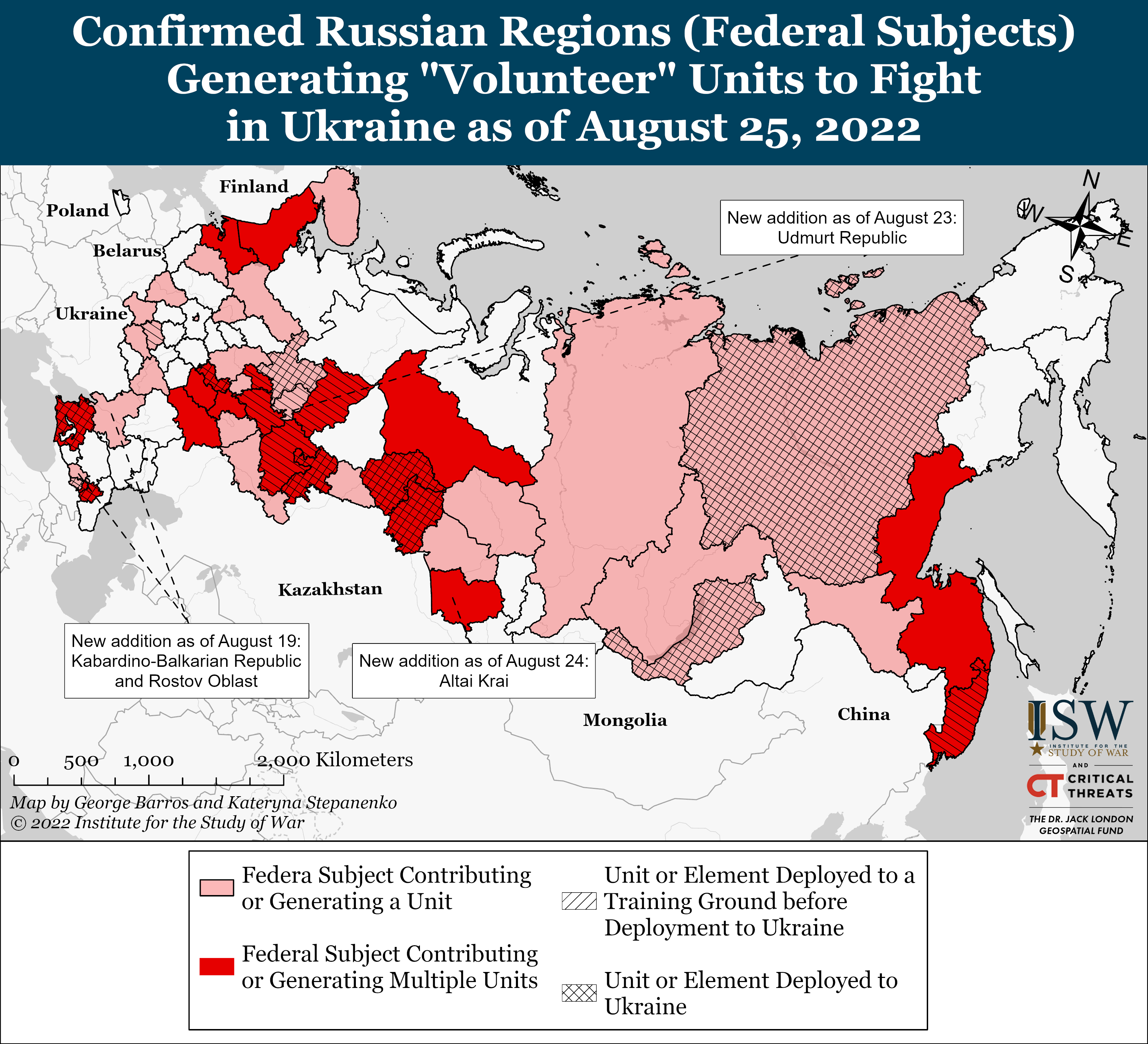 Internal friction between elements of different Russian conventional forces, special forces, private military company (PMC) workers, and national guard elements may be increasing. An unconfirmed Twitter post, which cited sources within the 22nd Spetznaz Brigade, claimed that relations between Russian Spetznaz units are breaking down, as are relationships between Spetznaz units and PMC elements.[36] The post claims that a conflict between groups from two Spetznaz brigades and a PMC unit turned into an armed fight when one Spetznaz unit sided with the PMC unit instead of the other Spetznaz unit.[37] The Russian military leadership is leveraging PMC elements such as the Wagner Group and Spetznaz as key maneuver elements, and internal firefights between these factions could erode the mutual confidence necessary for troops to cooperate effectively in combat.

Russian occupation authorities are continuing to face challenges to their administrative abilities in occupied areas and are taking measures to crack down on perceived threats to their control. The Ukrainian Resistance Center reported on August 25 that unknown actors, likely Ukrainian partisans, conducted an explosive attack against the Russian headquarters for referendum preparations in Pryazovske, Zaporizhia Oblast.[38] Russian authorities are likely increasingly concerned with the security of their administrative and military assets due to partisan strikes, as noted by Advisor to Kherson Oblast Head Sergey Khlan who stated that Russian forces are seizing and photographing passports from anyone they find near military facilities.[39] Khlan noted that this will allow Russian forces to use personal data to blame and threaten individuals in the case of strikes on such facilities.[40]

Russian authorities are taking measures to increase the economic integration of occupied territories into the Russian system. Luhansk Oblast Head Serhiy Haidai stated that Russian occupiers exported all 200,000 tons of grain collected by the Ukrainian producer “Agroton” to Russia and that the two major agricultural producers/exporters in Luhansk Oblast have been purchased and taken over by an unnamed Russian “entrepreneur” from Krasnodar Krai.[41] Russian authorities are likely continuing efforts to exploit Ukrainian economic assets in order to foster Ukrainian economic dependency on Russia and facilitate integration measures.

Russian and proxy authorities are also continuing efforts to facilitate the integration of educational systems in occupied Ukraine into the Russian system. The Ukrainian Resistance Center additionally reported that Russian authorities are offering Ukrainian parents a one-time 10,000-ruble ($165) payment if they apply to send their children to Russian-run schools in occupied Ukraine.[42] LNR Head Leonid Pasechnik attended the August Pedagogical Conference in Luhansk Oblast and affirmed that his main goal is securing the integration of schools in Luhansk into the Russian educational space.[43] Russian and proxy authorities are likely escalating educational integration efforts ahead of the school year in an attempt to instill Russian educational values into Ukrainian children as part of a wider brainwashing and psychological manipulation campaign that would allow the strengthening of occupational control.