Russian forces have likely decided to attack Avdiivka frontally from occupied Donetsk Oblast territory rather than waiting for Ukrainian forces to withdraw from their prepared defensive positions as a result of Russian envelopment operations northeast of the settlement. The Donetsk People’s Republic (DNR) and Kremlin-sponsored sources have published videos suggesting that Russian forces pushed Ukrainian forces out of their positions around the Butivka Coal Mine ventilation shaft southwest of Avdiivka.[1] Ukrainian forces have held positions around the Butivka Coal Mine ventilation shaft since 2015 and have described the location as the closest Ukrainian position to Donetsk City and a key defensive outpost for Avdiivka.[2] Russian forces have likely captured the Ukrainian position, given the Ukrainian General Staff‘s vague reports of ”partially” successful Russian advances in the area.[3] Russian forces are also continuing assaults on Pisky, west of Avdiivka, and will likely attempt to seize the E50 highway connecting the two settlements. Russian forces had previously attempted to break through Avdiivka’s northeastern outskirts but have not made significant progress in months.

The Russian Defense Ministry is likely trying to assuage distress that Ukraine’s effective use of the US HIMARS is causing Russian military personnel and milbloggers with inaccurate claims of destroying HIMARS launchers. Russian Defense Minister Sergey Shoigu claimed that Russian forces have destroyed six US-provided HIMARS and other Western-supplied military equipment in Ukraine in a conference call with the Russian Armed Forces leadership on August 2.[4] The Russian Defense Ministry also released a video claiming to have destroyed a building that housed two HIMARS launchers in Kharkiv Oblast on August 1.[5] Ukrainian Southern Command Chief Andriy Kovalchuk said that Russian forces did not destroy any HIMARS, and an unnamed Finnish official called Russian claims ”wishful thinking.”[6] The Ukrainian Main Military Intelligence Directorate (GUR) also reported that Russian defense authorities are covering up Russian servicemember casualties by transporting wounded Russians in civilian cars and misreporting the number of casualties caused by Ukrainian HIMARS strikes in the media.[7] Ukrainian HIMARS strikes have prompted many milbloggers and military correspondents to express concern over the effectiveness of air defense systems and the threats to Russian logistics, and these strikes are likely demoralizing Russian servicemen on the ground.[8]

A representative of the Ukrainian Main Military Intelligence Directorate (GUR) reported on August 2 that Russia has refused to provide detailed information on which Ukrainian POWs were killed or injured in the July 28 Olenivka prison attack. GUR Representative Andriy Yusov said that Russia has not responded to requests by Ukraine’s Coordinating Headquarters for the Treatment of POWs for information about casualties from the likely Russian-perpetrated attack on the Russian-controlled prison that killed at least 53 Ukrainian POWs.[9] Yusov said that of casualties that Russia has posted online some were supposed to be in hospitals or being readied for prisoner exchanges and were not supposed to be at the Olenivka prison. Yusov noted that Ukraine cannot confirm the veracity of online casualty lists at this time, however. Ukraine’s Coordinating Headquarters for the Treatment of POWs urged families of POWs to avoid sharing personal details about themselves or their captured loved ones with individuals or unofficial organizations soliciting those details, warning that sharing information could pose a risk to surviving POWs.[10] Deputy Ukrainian Prime Minister Irina Vereshchuk said that Russia has not responded to requests to return the bodies of killed POWs to Ukraine as of August 2.[11]

Initial and unconfirmed reports from August 2 suggest that Iran may have sent the first batch of UAVs to Russia for field testing. A US-based open-source intelligence (OSINT) Twitter account citing unofficial Iranian sources claimed that Iran sent a batch of UAVs to Russia, along with Iranian pilots and technicians who will train for the use and repair of Russian Su-35 aircraft.[12] While ISW cannot independently confirm this claim, it is consistent with recent reports that Tehran and Moscow are pursuing greater aviation cooperation in order to circumvent international sanctions on Russia and Iran and support Russian operations in Ukraine.[13] If true, this claim suggests that Iran may be receiving Russian Su-35 aircraft in return for the drones, which could have been part of an agreement signed by Moscow and Tehran on July 26.[14] The agreement stipulated that Iran would increase the volume of passenger flights to Russia and additionally repair Russian aircraft.[15] Tehran may seek to use this agreement to facilitate the acquisition of Russian combat aircraft. 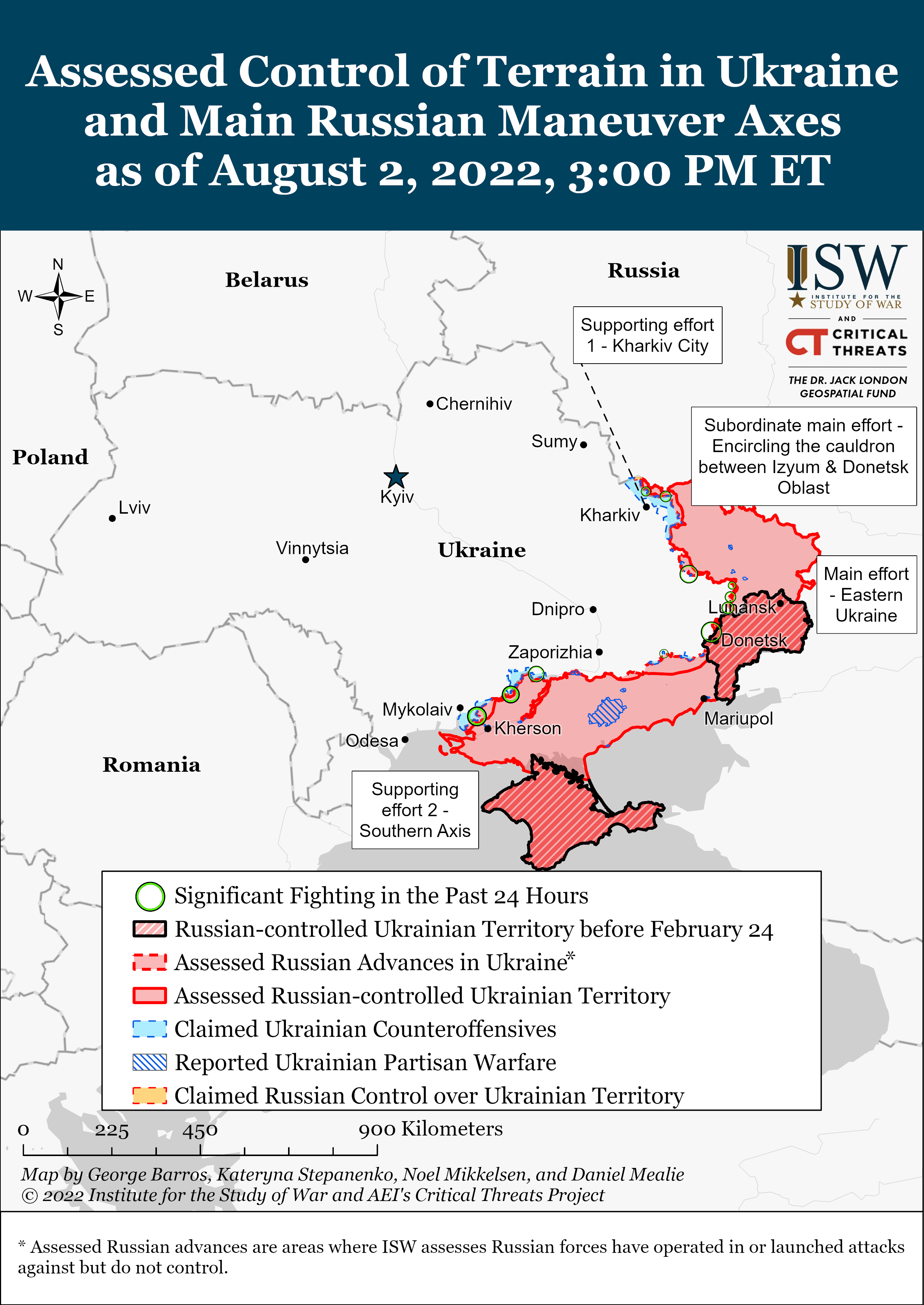 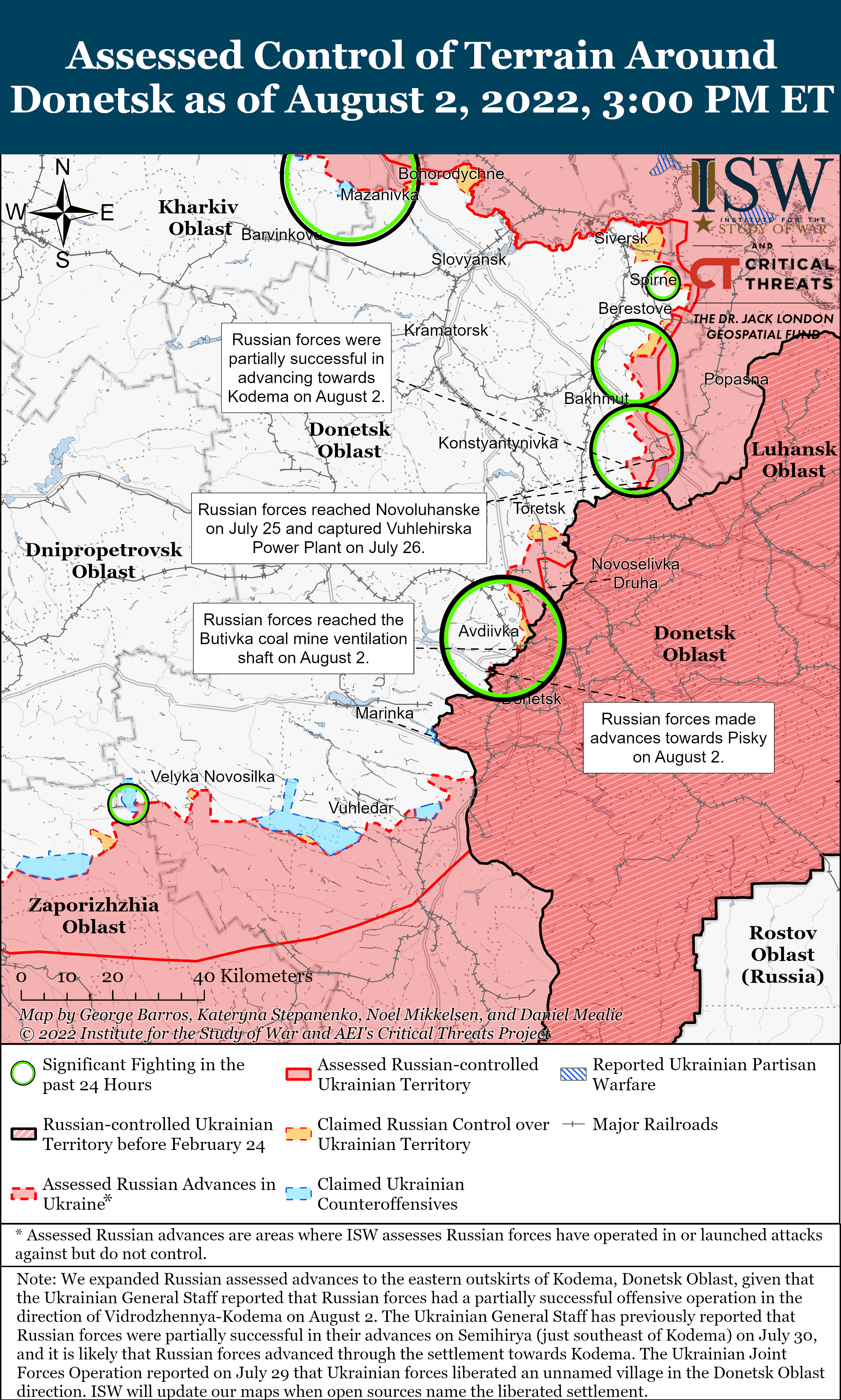 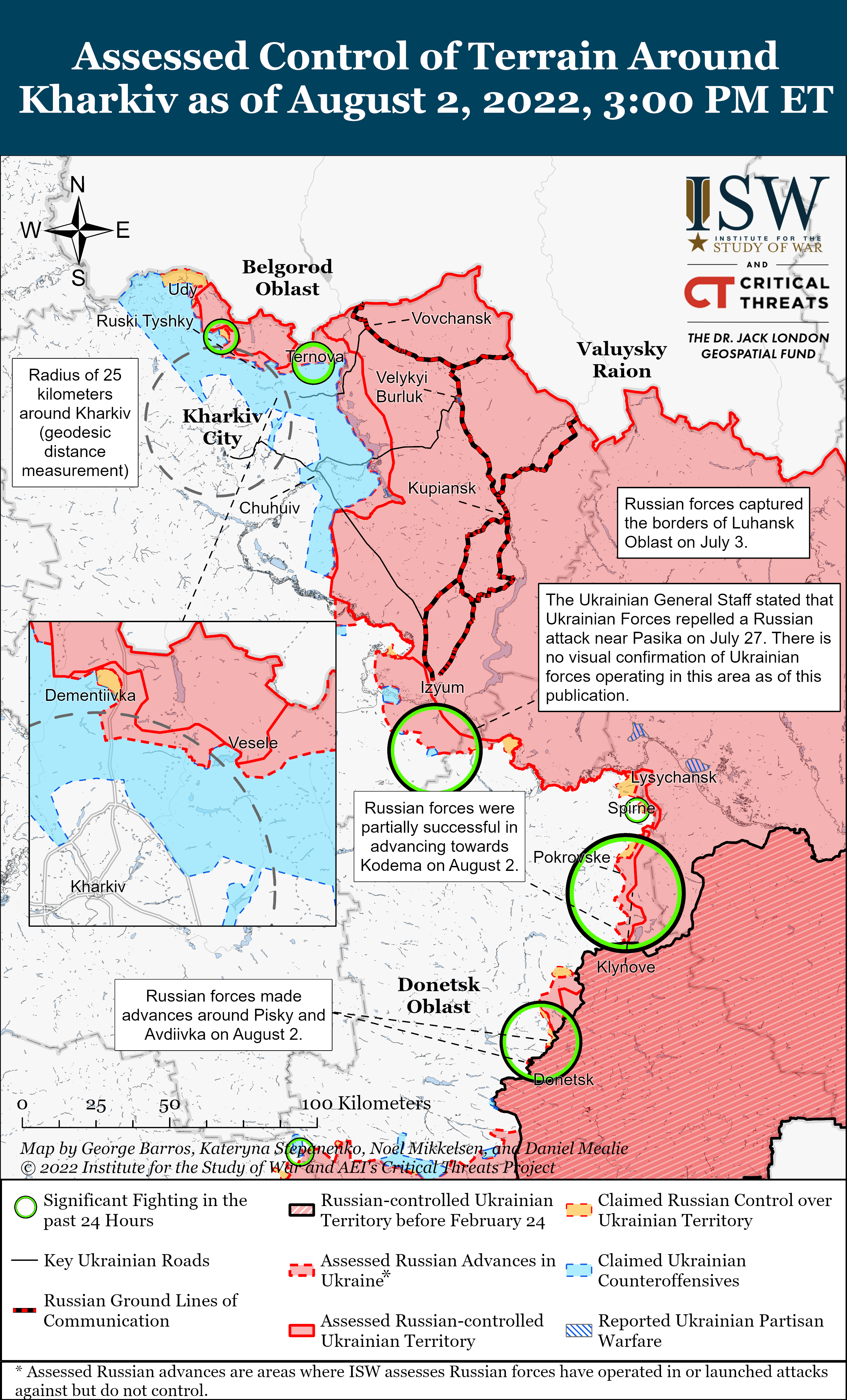 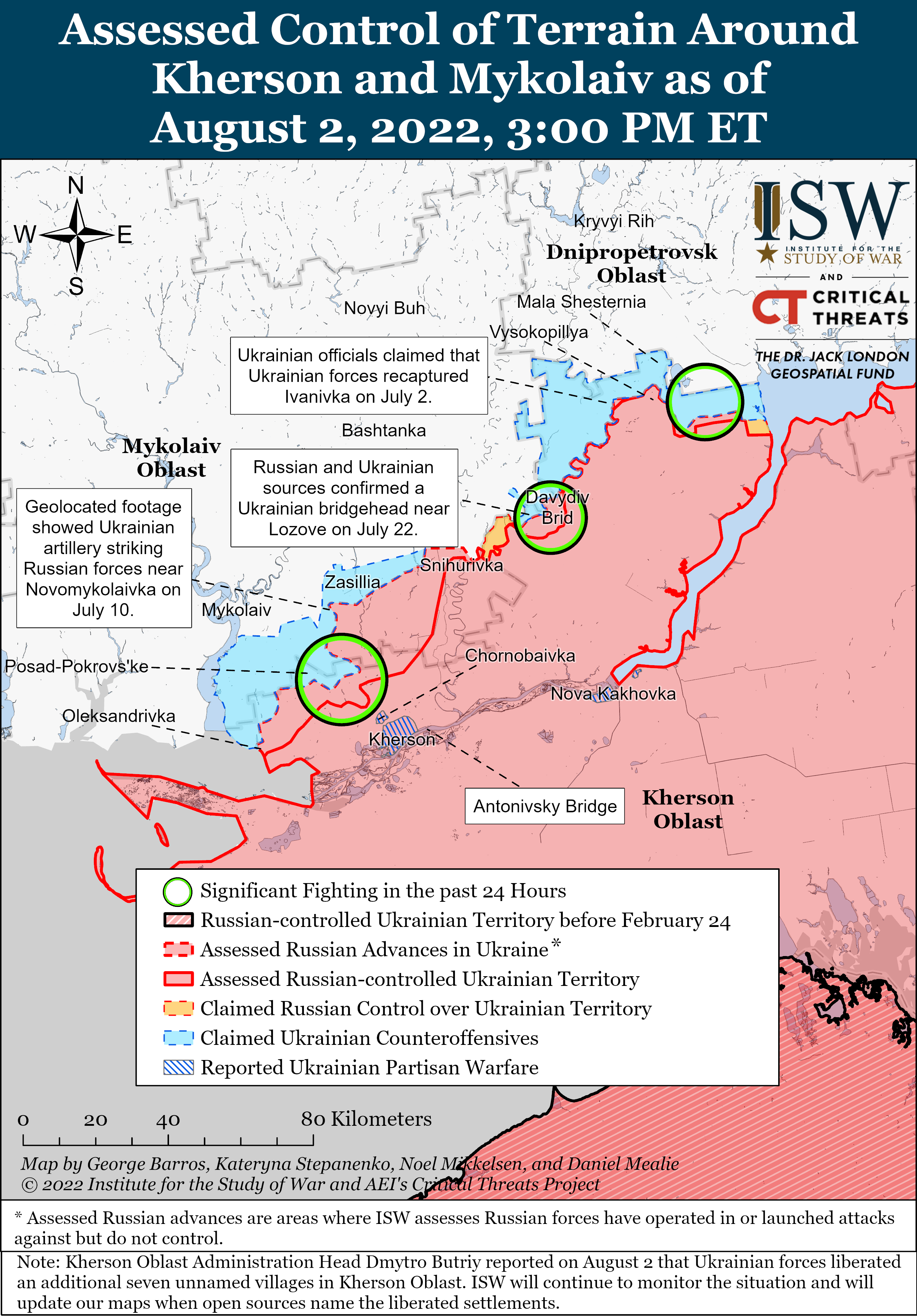 Russian forces continued to accumulate and transfer forces to southern Ukraine from other axes. The Ukrainian Main Military Intelligence Directorate (GUR) Representative Vadym Skibitsky reported that a battalion tactical group (BTG) of Russian airborne troops arrived in Crimea and will deploy to the frontlines in the near future.[40] Skibitsky had previously reported that Russian forces started redeploying airborne troops from Donetsk Oblast to occupied Kherson Oblast territories, and the BTG will likely support Russian efforts to suppress Ukrainian counteroffensives in the region.[41] Skibitsky added that Russian forces are expanding air defense systems in Crimea and are regrouping forces in the Zaporizhia and Kherson Oblast directions, which likely indicates that Russian forces are intending to defend their positions from Ukrainian counteroffensives throughout the Southern Axis. The Ukrainian Southern Operational Command noted that there have not been any changes to the Russian force composition in Kherson Oblast as of August 2, however.[42] Ukrainian Advisor to the Mayor of Mariupol  Petro Andryushenko also published footage of a convoy of Russian engineering equipment and personnel carriers moving through Mariupol in the Zaporizhia Oblast direction.[43]

Russian forces continued to fire at Mykolaiv and Dnipropetrovsk Oblasts with MLRS and air defense systems. Ukrainian officials reported that Russian forces fired S-300 air defense missiles and Uragan MLRS systems at Mykolaiv City and launched 16 rockets from Smerch MLRS at the Kryvorizka Power Station.[44] Russian forces also shelled other settlements in Mykolaiv and Dnipropetrovsk Oblasts with MLRS and tube artillery.[45] Russian forces did not fire on Nikopol on August 2, however they are likely to resume attacks on the settlement. US Secretary of State Anthony Blinken also noted that Russian forces are continuing to use the occupied Zaporizhzhia Nuclear Power Plant (NPP) just south of Nikopol, as a “human shield” for their military base, as Ukrainian forces will not fire at the NPP in self-defense.[46] 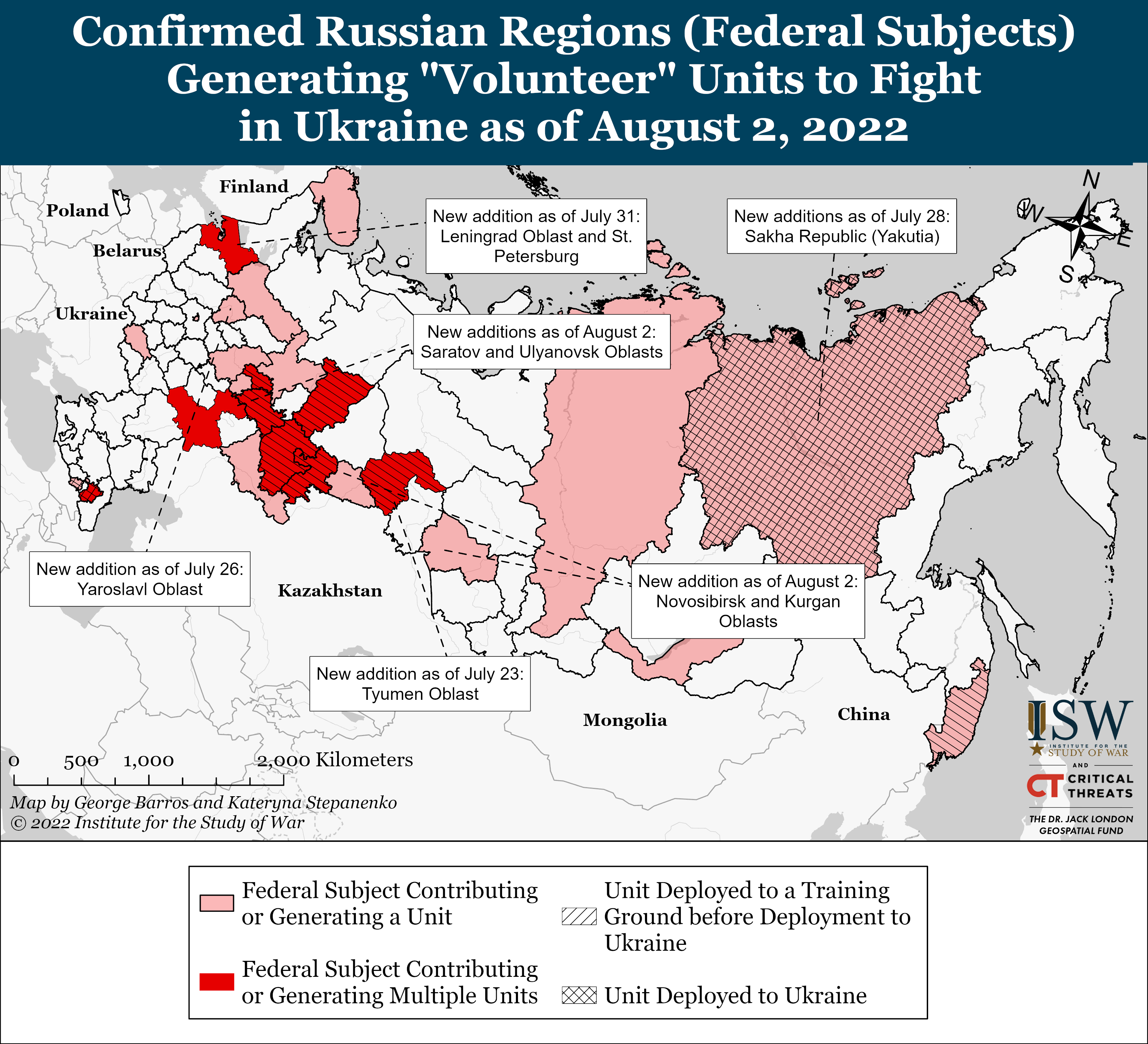 Russian federal subjects (regions) are likely changing conditions for volunteer battalion recruits to receive one-time enlistment payments. The Republic of Bashkortostan specified that recruits will receive their one-time enlistment payment of 200,000 rubles (approximately $3,300) but the funds will be frozen until 90 days after their enlistment.[51] The Republic of Bashkortostan also noted that recruits will receive their daily payments of 2,000 rubles (approximately $32) for service after their training at the end of each month. ISW has previously reported that 40 servicemen from the Chuvash ”Atal” volunteer battalion complained that they have not received their promised enlistment bonuses and post-training period payments. Federal subjects are likely beginning to adjust their payment schedules.[52] New battalions such as Saratov Oblast’s two unnamed units advertised that the recruits will receive enlistment bonuses of 150,000 rubles (approximately $2,400) after three months of service.[53] The federal subjects are likely trying to prevent Russian recruits from obtaining the enlistment payments and deserting prior to deploying to Ukraine. The federal subjects may also be unable to generate funds to immediately pay recruits, however.

Novosibirsk, Kurgan, Saratov, and Ulyanovsk Oblasts are forming new volunteer battalions. Novosibirsk Oblast is recruiting men between 18 and 50 years of age for an unnamed volunteer battalion and is offering 300,000 rubles (about $4,900) for enlisting.[54] Kurgan Oblast Youth Cossack Organization Head Vladimir Yarushnikov reported that local officials are discussing the formation and recruitment process for an unnamed battalion.[55] The Ulyanovsk City Administration also announced the formation of two reserve-volunteer battalions ”Sviyaga” and ”Simbirsk” that would have 200 recruits each.[56] Saratov local outlet Versiya Saratov reported that Saratov City Administration announced recruitment for two unnamed volunteer battalions based on the ”order from Russian Defense Ministry.”[57]

Ukrainian civilians are continuing to resist the Russian occupation with acts of civil disobedience and partisan sabotage. The Ukrainian Resistance Center reported on August 2 that Ukrainian civilians chased 40 Russian doctors out of abandoned homes in which they tried to settle in Berislav, Kherson Oblast.[58] Russian occupation authorities have been forced to import Russian civilian doctors on temporary military tours to treat injured Russian servicemembers because many Ukrainian medical staff members either evacuated occupied areas or refuse to collaborate with Russian occupation forces. Russian officials have offered doctors increased salaries and veteran status to move to occupied Ukrainian territories. The Ukrainian Resistance Center also reported on August 2 that many schools in occupied areas will be unable to open by September 1, the ordinary start of the school year, because Ukrainian children and their families have either evacuated or are unwilling to attend Russian-run schools.[59] The Center reported that many Ukrainian teachers are also refusing to participate in the Russian curriculum, forcing Russian occupation authorities to import teachers from Russia and occupied Crimea.

The fire set by Ukrainian partisans on July 30 in a field near Russian-occupied Bezimenne, about 20km east of Mariupol, successfully damaged Russian military equipment at a nearby military base, according to an August 1 update by exiled Mariupol mayoral advisor Petro Andryushenko.[60] Ukrainian sources had reported the effort to damage Russian equipment and fortifications and to prevent Russian occupation authorities from looting Ukrainian grain on July 30.[61]

The Kremlin is likely considering longer-term methods to subdue the occupied Ukrainian population beyond the increased securitization on which ISW has previously reported. State Duma Defense Committee Head Andrey Kartapolov said on Russian state-controlled television on August 1 that “the biggest problem [Russia faces in Ukraine] today is people … If we want these territories to be with us, to have a future as part of the Russian Federation … we need to deal with the children.”[62] Kartapolov advocated for taking Ukrainian children from their homes to Russian military boardings schools and universities. He argued that the Kremlin ”has to do this because then people will believe we are serious and that Russia is here for a long time—forever."

Russian officials like Kartapolov are increasingly blatant in demonstrating their intention to annex occupied Ukrainian territories. Russian Kherson Occupation Administration Deputy Head Kirill Stremousov said on August 2 that authorities will continue to allow Kherson residents to use the Ukrainian language, but that “Kherson Oblast will become a worthy part of Russia by forming a people’s government.”[63]