Russia continued offensive operations in eastern Ukraine on a limited basis as it worked to reconstitute forces withdrawn from the Battle of Kyiv and to establish necessary logistical bases for increased offensive operations in the Donbas area. Russian forces withdrawn from the Kyiv region have not yet been reintroduced into Ukraine to fight. The Russian military has continued to conduct small-scale limited offensive operations on the Izyum and Severodonetsk axes and has not yet gone over to a better-resourced or broader offensive campaign. The Battle of Mariupol continues even as Ukrainian officials accuse Russia of using chemical weapons on Mariupol’s defenders. 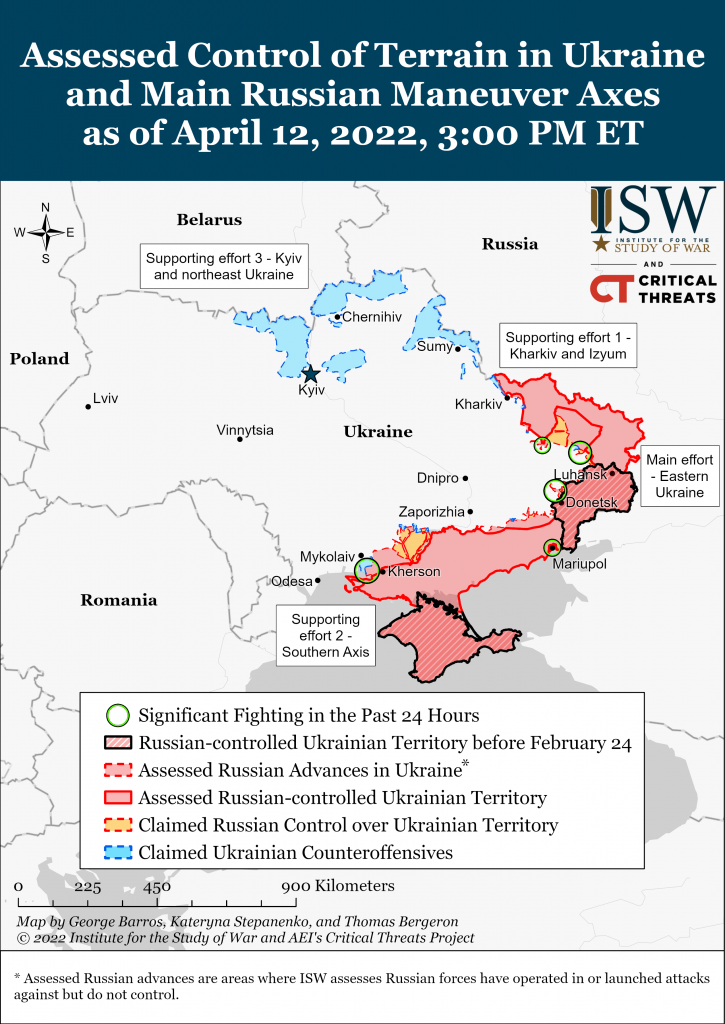 The Russian military continues efforts to reconstitute forces damaged in the failed attack on Kyiv in the Belgorod and Voronezh areas but has not yet sent those forces back into Ukraine to resume fighting. Ukrainian reports suggest that morale and will to fight remain low in some Russian units and areas. The Ukrainian General Staff reported on April 12 that elements of the Russian 41st Combined Arms Army and the 90th Tank Division are relocating to Belgorod and Voronezh Oblasts.[1]

The Ukrainian Defense Intelligence also claimed on April 12 that Russian troops continued to struggle with low morale and that promised financial incentives to participate in combat in Ukraine have not been delivered to some units as promised.[2] The report stated that servicemen of the 47th Guards Tank Division of the 1st Tank Army failed to receive promised additional payment for participating in operations in Ukraine and that military leadership ignored appeals for payments.[3] The Ukrainian GUR claims that Russian troops are refusing to participate in fighting due to the number of bodies returning to Russia from Ukraine and that the Russian military is shipping bodies in smaller batches to avoid causing panic in local communities.

Ukrainian sources alleged that Russian troops used unspecified chemical weapons with suffocating effects on Ukrainian defenders and civilians in Mariupol on April 11.[4] ISW has not been able to independently verify these specific allegations but has repeatedly warned that Russian troops might use chemical weapons.[5] Mariupol is an optimal location in which Russian forces might use chemical weapons to demonstrate their willingness to escalate while reducing the risk that the international community could obtain incontrovertible proof of their violation of Russia’s international legal commitments to abstain from using such weapons. Russia’s encirclement of Mariupol allows Moscow to prevent outsiders from obtaining physical evidence or interviewing or examining survivors, and Russia’s control of the information coming out of Mariupol makes it difficult for survivors to show clear evidence of their symptoms to the world.

The Ukrainian defense of Mariupol continued on April 12 despite reports of dwindling Ukrainian resources and Ukrainian troops surrendering.[6] Due to the restricted information environment surrounding Mariupol, ISW cannot confirm conflicting statements made by Ukrainian officials and Russian sources regarding the state of Russian control of the Port of Mariupol.[7] 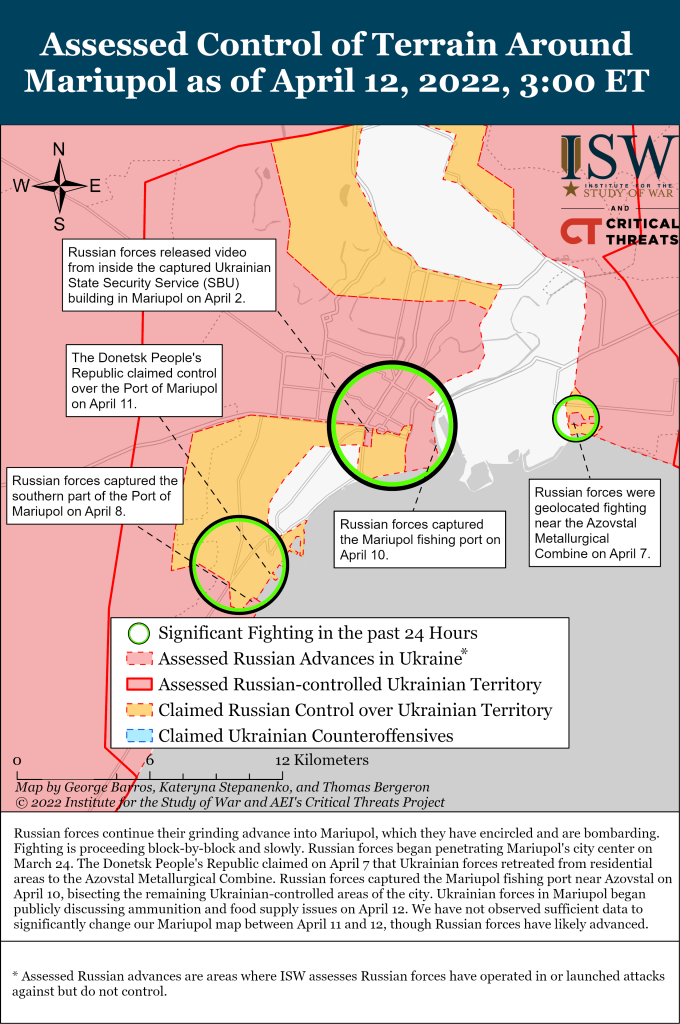 Russian forces continued unsuccessful offensive operations in Severodonetsk, Lysychansk, and Popasna, primarily relying on artillery attacks, although they engaged in urban combat in Rubizhne on April 12.[8] The Ukrainian General Staff reported limited fighting in other parts of Donetsk on April 12.[9] Social media users geolocated footage released by Chechen forces on April 11 to Rubizhne, confirming the presence of Chechen Rosgvardia units in the northeastern neighborhood of the settlement.[10] The Chechen units are reportedly entrenching in the vicinity of Rubizhne, which suggests that they intend to go over to the defensive at least in some parts of the battlespace.[11] It is not yet clear why the Chechens would adopt a defensive posture at that place at this time.

Russian forces continue to deploy ad-hoc units to Donbas, with social media users observing the 2nd Cossack Battalion leaving Orenburg on April 7, but the Russian command has not yet committed new units or units previously withdrawn from other axes to the offensive.[12] 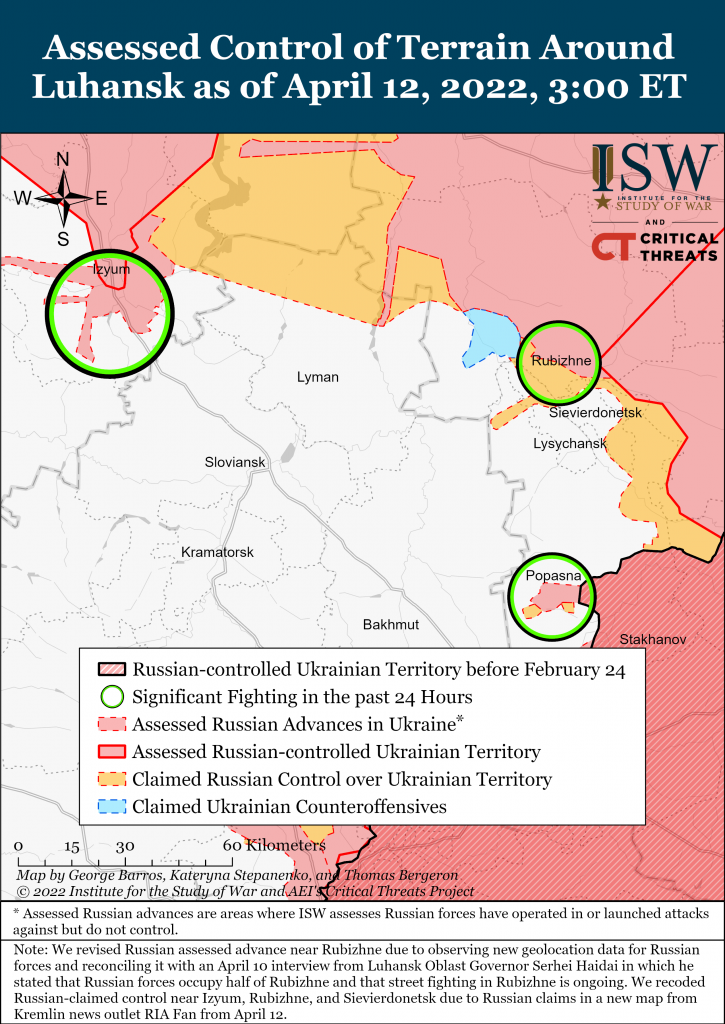 Russian forces did not make any significant territorial advances in Kherson Oblast but focused on improving defensive positions and conducting aerial reconnaissance on April 12.[15] The Ukrainian General Staff reported that Russian forces showed signs of improving air defense in Melitopol on April 12.[16] 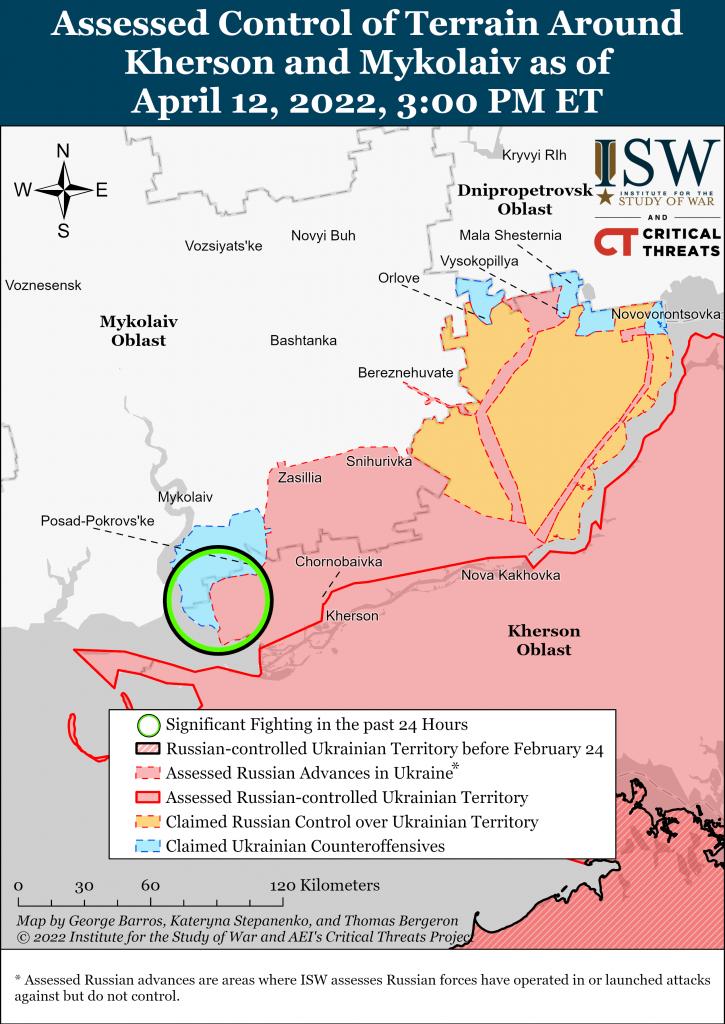