Circumstantial evidence suggests that Supreme Leader Ali Khamenei is at least temporarily unable to perform his normal duties. Khamenei has been unusually absent in recent days amidst countrywide, anti-regime protests, which began on September 16. Rumors have circulated that Khamenei’s health has deteriorated significantly since early September.[1] CTP cannot verify these rumors about Khamenei’s health, and such reports should be treated with skepticism. There are indications that Khamenei is ill or incapacitated, however. Regime power centers are behaving as if succession is either imminent or underway. President Ebrahim Raisi—a prominent frontrunner to succeed Khamenei—is positioning himself to become the next supreme leader with support from senior officers from the Islamic Revolutionary Guards Corps (IRGC).

The ongoing Mahsa Amini protests are straining the regime’s capability and willingness to crack down but are not yet existential to the regime. Protests began on September 16 in response to the regime’s brutal killing of 22-year-old Mahsa Amini.[2] Protests have concentrated primarily in ethnically Kurdish regions of Iran, where Amini lived, and Tehran but spread rapidly to other locations and demographics.[3] State security services have launched a bloody crackdown against the ongoing protests but have struggled with bandwidth constraints and exhaustion according to some Iranian media outlets.[4] Tehran security officials reported that 185 Basij members were injured in the protests with five in critical condition.[5] The Basij is a paramilitary branch of the IRGC responsible for civil defense and social control. These protests do not appear close to collapsing the regime at this time, however.

The IRGC may assess that anti-regime Kurdish militants operating around the Iran-Iraq-Turkey border are arming and stoking the protests. The IRGC has conducted five consecutive days of attacks involving artillery, drones, and missiles into Iraqi Kurdistan.[6] Iranian state media have claimed that anti-regime Kurdish groups are fomenting instability against the regime.[7] CTP cannot verify these allegations. The most recent round of IRGC attacks on September 28 killed an American citizen, Omar Mahmoudzadeh, in Iraqi Kurdistan.[8]

The regime’s brutal crackdown and continuing IRGC attacks are stoking unrest in Kurdish communities throughout the region. Demonstrations expressing solidarity with the Iranian protesters occurred in Erbil and Sulaymaniyah in Iraqi Kurdistan and Qamishli in northern Syria on September 28.[9]

Circumstantial evidence suggests that Supreme Leader Ali Khamenei is at least temporarily unable to perform his normal duties. Khamenei cancelled his planned attendance at the annual meeting of the Assembly of Experts—the regime body constitutionally responsible for selecting the supreme leader—on September 7.[10] Khamenei has historically given speeches at these meetings. The New York Times and Wall Street Journal both reported that Khamenei’s health has declined rapidly in recent weeks, prompting him to cancel meetings and public appearances.[11] The New York Times reported that he underwent surgery for a bowel obstruction in early September, citing unidentified sources inside and outside of Iran.

CTP cannot verify these rumors about Khamenei’s health, but circumstantial evidence indicates that Khamenei may indeed be ill or incapacitated. He has been abnormally silent about the ongoing countrywide, anti-regime protests, which began on September 16. Khamenei gave speeches on September 17 and 21 but did not address the protests.[12] Khamenei has never failed to address a major protest wave and responded previously to such protest waves within days of their initiations. He commented five days after countrywide protests erupted in December 2017 and two days after countrywide protests erupted in November 2019.[13]  It is unclear why he did not comment on September 17 or 21, but his continued absence as the protests have expanded and become more dangerous strongly suggests that he is at least temporarily unable to address them publicly.

Regime power centers are behaving as if succession is either imminent or underway. President Ebrahim Raisi gave a televised address on September 28 boasting of his accomplishments since taking office in August 2021.[14] He mentioned the ongoing Mahsa Amini protests at the end of his speech, reiterating that the regime will crack down on the demonstrations. His address was remarkably tone-deaf given the protests raging across the country and sounded more like an appeal to key regime constituencies for support in a succession struggle than like a president attempting to calm massive and violent demonstrations.

Twenty-four current and former IRGC leaders signed an open letter publicly praising Raisi for his speech to the UN General Assembly on September 21.[15] The letter signatories include Iran’s most high-ranking and influential officers who control most of the Iranian armed forces, such as Armed Forces General Staff Major General Mohammad Bagheri, Khatam ol Anbia Central Headquarters Commander Major General Gholam Ali Rashid, IRGC Commander Major General Hossein Salami, and IRGC Quds Force Commander Brigadier General Esmail Ghaani. Many of these officers are part of a human network of IRGC leaders who have maintained close ties with one another for decades and periodically intervene in domestic politics to promote their hardline agenda.[16] This IRGC network publishes such letters extremely rarely and uses them to signal its political position on critical issues to the rest of the regime. The timing of this letter indicates that the IRGC network likely seeks to signify its endorsement of Raisi as supreme leader, particularly since there was nothing particularly remarkable about Raisi’s UN speech to have called forth such an unusual and rare response. The participation of Ali Shamkhani and Yahya Rahim Safavi in this letter was especially significant as they are both in Khamenei’s inner circle. Shamkhani is the secretary of the Supreme National Security Council, which advises the supreme leader on defense and foreign policies. Safavi is Khamenei’s senior military adviser.

Numerous unverifiable social media rumors are circulating online regarding Khamenei’s status and health. Some have claimed that Khamenei is dead.[17] Others have reported an ongoing power struggle among different regime factions.[18] These rumors are neither sufficiently detailed nor sufficiently credible to report in detail at this time. CTP will continue to monitor the situation.

Popular, anti-regime protests have erupted throughout Iran since September 16. The Iranian morality patrol arrested and brutally killed 22-year-old Mahsa Amini for failing to adhere to regime veiling standards in Tehran on September 16, sparking widespread unrest.[19] Demonstrations initially concentrated in northwestern Iran—specifically Kurdistan Province, where Amini lived—and Tehran, but have since spread countrywide. Protests are now occurring in over 93 cities and towns in 31 of Iran's 32 provinces as of September 25. Demonstrations have transcended criticism of the morality patrol and mandatory veiling, and some protesters have called for the overthrow of the Islamic Republic. 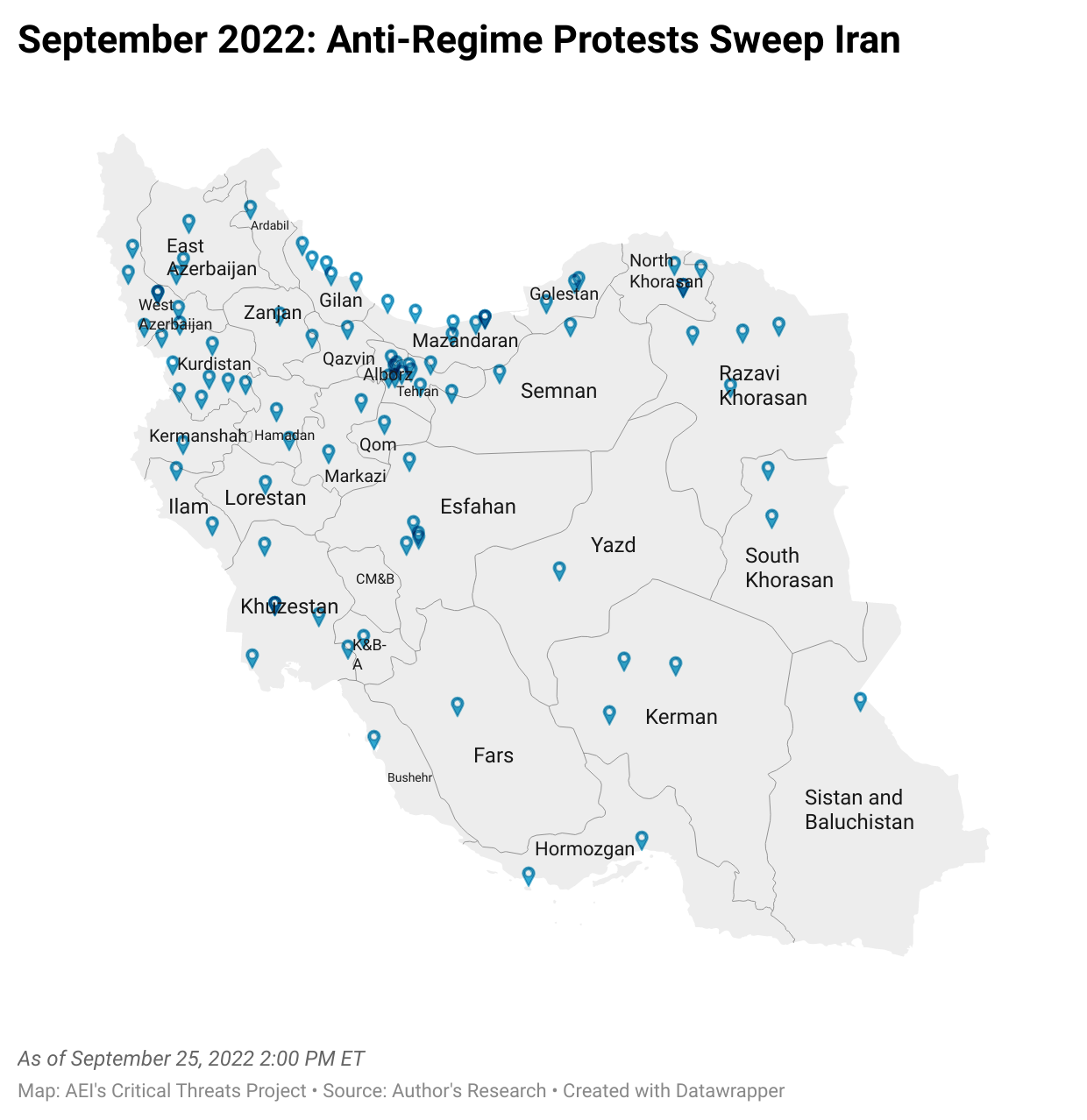 The regime has violently suppressed protests and sustained casualties among its security forces in recent days. State broadcaster IRIB reported 41 people including security personnel have died in the ongoing protests as of September 25.[20] Recent estimates place protest-related deaths at 76.[21]  A Tehran Province Basij official today announced that 185 Basij members have been wounded—five of whom are in critical condition—in violent clashes with protestors. The official claimed that some protestors were armed.[22] Iranian state-affiliated media and officials have similarly confirmed the deaths of several security officials throughout the country.[23]

Some hardline officials have sympathized with Mahsa Amini’s death—and subsequent demonstrations—and called on the regime to heed their demands. Iranian media and officials have largely framed ongoing protests as riots organized by foreign actors and vowed to suppress further unrest.[27] Other officials, however, notably a hardline Shia cleric, have intimated that the protestors have legitimate grievances. Grand Ayatollah Hossein Nouri Hamedani released a statement urging Iranian authorities to address protestors’ concerns on September 25.[28]

Amini’s death has ignited unrest among historically marginalized ethnic groups within and outside of Iran’s borders. Amini was an Iranian Kurd who lived in Kurdistan Province. Amini’s death likely ignited preexisting anti-regime sentiment among Iranian Kurds and possibly other minorities, such as Iranian Baloch in Sistan and Baluchistan Province.[29] Footage circulating on social media suggests that most protests were initially concentrated among Kurdish communities in northwestern Iran.[30]

The IRGC has conducted large-scale artillery, drone, and missile attacks against anti-regime Kurdish militias in Iraqi Kurdistan since September 24. The IRGC Ground Forces targeted Kurdish groups such as Komala, Kurdistan Democratic Party of Iran, the Free Life Party of Kurdistan, and Kurdistan Freedom Party positions.[33] The most recent IRGC attack on September 28 included 73 rockets and ballistic missiles as well as kamikaze drones, killing at least nine and injuring 32 civilians.[34] The IRGC killed an American citizen, Omar Mahmoudzadeh, in the attack.[35]

The Iranian regime and its proxies are framing these attacks as retaliation for anti-regime Kurdish militants stoking tensions in Iran. Iranian state media have claimed that these Kurdish groups are arming and supporting protesters.[36] Iran-backed proxy Telegram channels parroted this narrative and described the Kurdish militias as international terrorist organizations.[37] The IRGC may have sought to degrade Kurdish militias’ capability to logistically and materially support protesters.

US forces downed an Iranian Mohajer-6 drone that the US assessed posed a threat to US personnel.[38] It is unclear whether the IRGC meant to target US positions with the drone or whether it was part of the attack on anti-regime Kurdish targets.