Iran may attack the US, Israeli, and/or Saudi targets in retaliation for the role Iranian officials claim those countries have played in stoking the ongoing, anti-regime protests. This assessment is based on rhetoric from Iranian military leaders on October 6. Senior Iranian military officers released a statement accusing the US, Israel, and Saudi Arabia of coopting and stoking the protests and vowed to retaliate.[1] The content and nature of the statement suggests that the heads of each major military and security body approved its release. The statement did not list the names of these officers but noted that they are from the following military bodies:

The regime could use its proxy and partner militias in Iraq, Syria, Lebanon, Palestine, and Yemen to attack US forces and US regional partners. Yemen’s civil war truce expired on October 2, allowing the regime to resume using the Houthis to attack the Gulf states.

The security forces’ statement suggested that Supreme Leader Ali Khamenei likely was indeed seriously ill in recent weeks but has recovered. The officers reaffirmed the armed forces’ allegiance to Khamenei and wished him good health and a long life. Western reporting indicates that Khamenei’s health declined significantly in early September.[2] Khamenei spoke to a military officer graduation ceremony on October 3, appearing no more unhealthy than he has seemed in recent months.[3]

The military officers reiterated their uncompromising stance toward the protests in the statement. They labeled protesters “seditionists” and vowed to defeat them. These remarks match the aggressive rhetoric that Khamenei and other senior political and security officials have used in recent days.  The regime labeled the protesters in the 2009 Green Movement and other major protest waves “seditionists.”

This protest movement is unlike previous protest waves in Iran, and its trajectory is therefore difficult to forecast. Protester grievances are primarily political but resonate across many different communities and socio-economic classes in Iran. The last major political (as opposed to economic) protest movement in Iran was the Green Movement, which lasted throughout 2009.  It is thus unclear whether this protest movement will last for weeks or months.

Anti-regime protests occurred in at least nine cities in five provinces on October 6. Highschool and university students reportedly led smaller-scale demonstrations throughout the country. The regime’s ongoing internet and telecommunication restrictions are likely limiting the open-source information available on anti-regime demonstrations. CTP assesses with moderate-to-high confidence that protests occurred in the following locations: 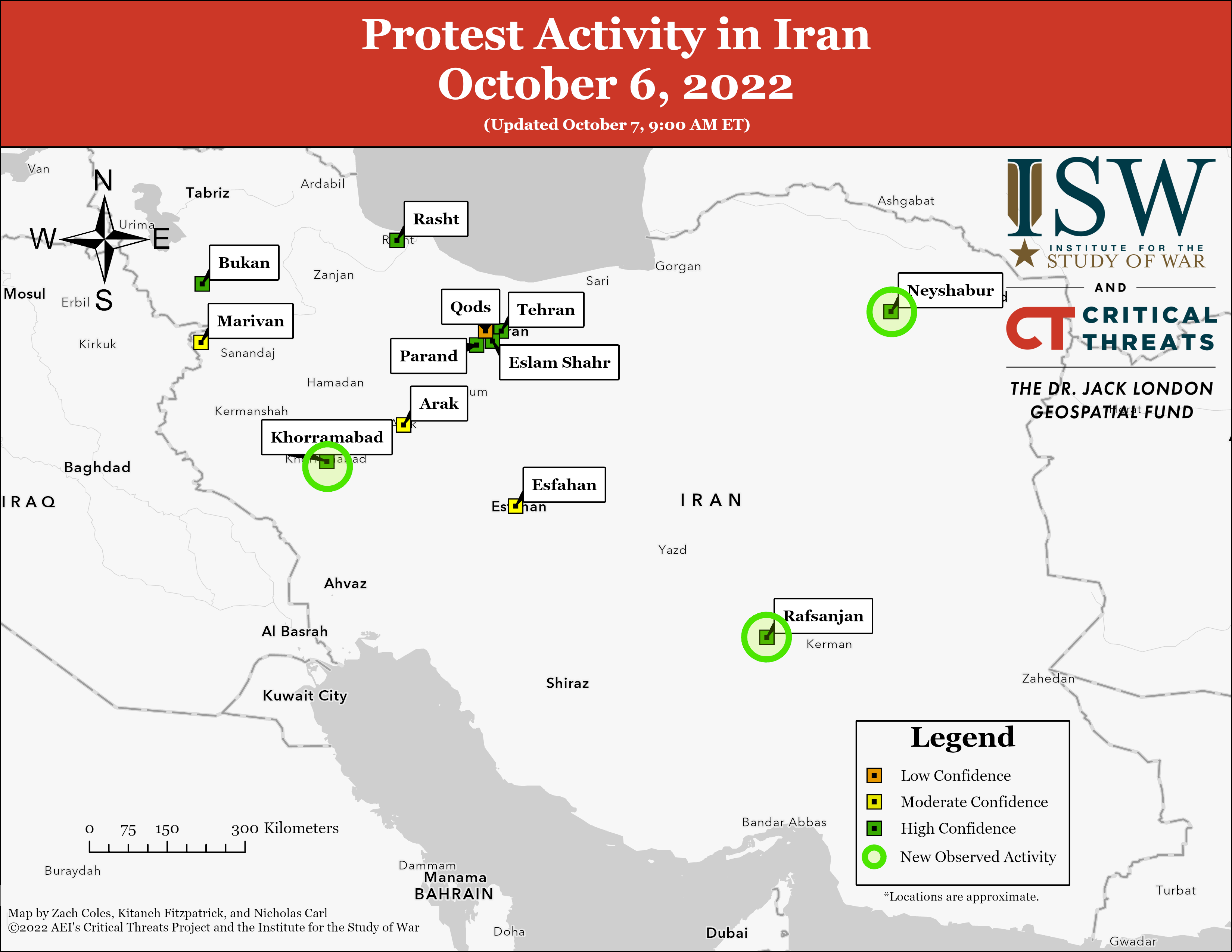 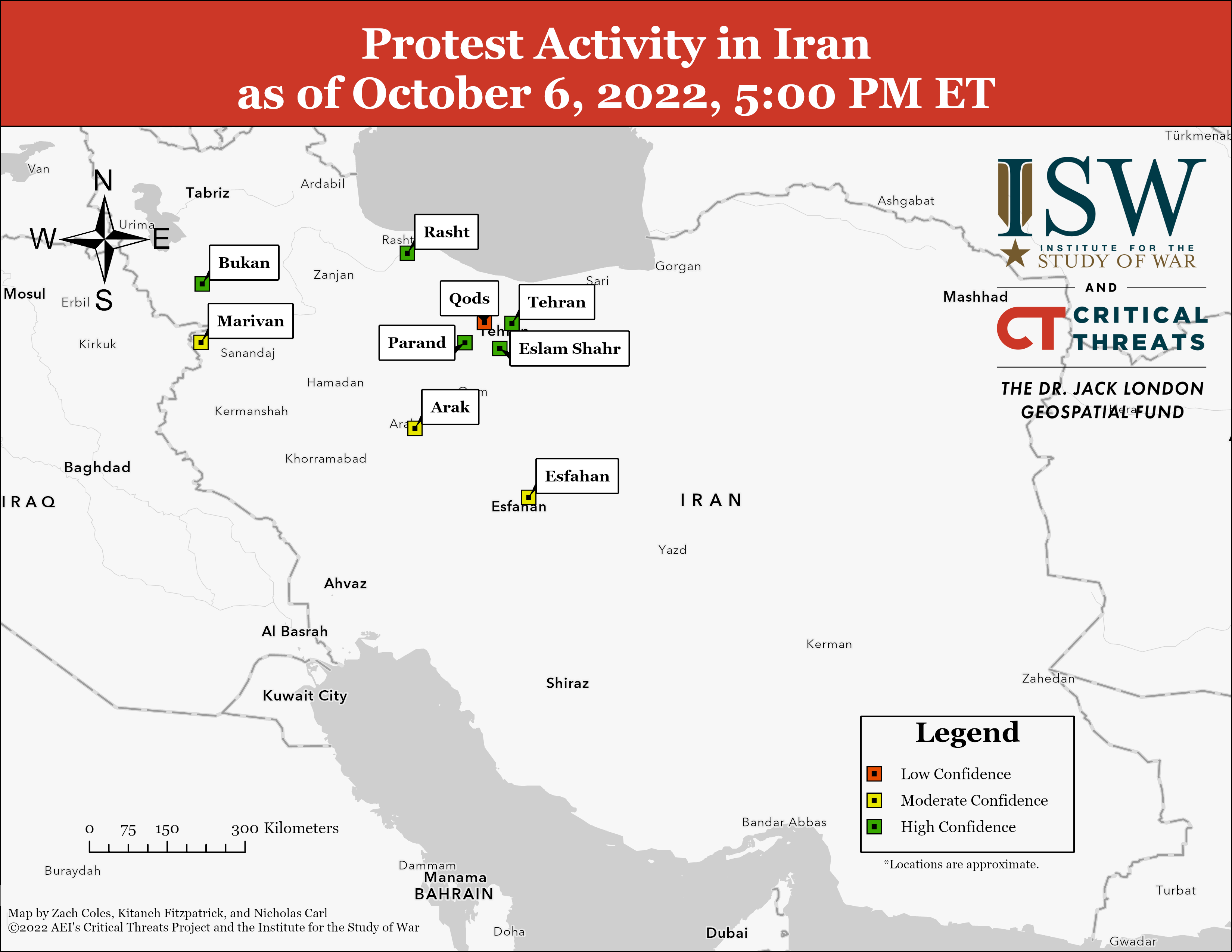 IranWire corroborated social media reports of a brutal crackdown on Tabriz University student protestors on October 2, citing an eyewitness account.[5] IranWire’s source stated that the Iranian Law Enforcement Command’s anti-riot unit used batons and shotguns to injure protestors and arrested roughly 300 students.[6] The source added that students were unable to access the internet on campus as of October 5.[7]

Prominent Iranian Sunni cleric Molavi Abdolhamid refuted the regime’s claims that Salafi Jihadi militants killed dozens of Zahedan, Sistan and Baluchistan residents and security personnel on September 30.[8] Abdolhamid insinuated that Iranian authorities were responsible for violent clashes between security forces and anti-regime protestors, which resulted in the deaths of senior provincial IRGC officials.[9] Many social media users have referred to the regime’s violent crackdown on Zahedan protestors as ”bloody Friday.”[10] Amnesty International reported that Iranian security forces have killed at least 82 protestors and bystanders—some of whom were children—since nation-wide protests began on September 16.[11]

Anti-regime protests may increase in size and scale in the coming days, particularly on October 8.[12] A Tehran University faculty member announced that Sharif University faculty members will commemorate violent anti-regime protests that occurred on the university’s campus on October 2.[13] Some student groups are also calling on university faculty to condemn the regime’s brutal crackdown on student protestors.[14] Iranian social media users are increasingly commemorating teenagers Sarina Esmael Zadeh and Nika Shakarami, both of whom were brutally killed by security forces after participating in anti-regime protests.[15] These individuals serve as secular martyrs around whom protestors can rally and may reinvigorate demonstrations in the coming days.

The IRGC attacked anti-regime Kurdish militant positions in Iraqi Kurdistan for the eleventh consecutive day. The IRGC shelled positions near Sidekan, Soran District, Erbil Province.[16] Sidekan mayor Ihsan Chalabi said that attacks by Iranian and Turkish forces since September 24 have forced civilians to abandon six villages and close two schools.[17] An anonymous senior Iraqi Kurdish official claimed that the IRGC is reinforcing positions along the border. The official said the IRGC warned the Kurdistan Regional Government that it may conduct ground operations in eastern Iraqi Kurdistan if anti-regime Kurdish militants do not vacate the area.[18] More than 100 Iraqi MPs signed a Kurdistan Democratic Party-led request to hold an emergency parliamentary session about Iran’s repeated attacks into Iraqi Kurdistan.[19] Iraqi Speaker of Parliament Mohamed al-Halbousi agreed to discuss the issue during the upcoming October 8 parliament session.[20]