The regime has begun indicting and sentencing arrested protesters as part of the increasingly harsh and uncompromising stance that the regime has adopted toward the ongoing protests. Tehran Provincial Chief Justice Ali al Ghasi Mehr announced the indictment of around 1,000 protesters on October 31.[i] Shiraz Provincial Chief Justice Asadollah Jafari announced the indictment of 70 protesters, six of whom the regime has already found guilty.[ii] Mehr and Jafari both noted that the judiciary will open protester trials to the public. The regime will likely use these show trials to make an example of some arrested protesters and deter future demonstrations.  If the regime shows trials, convictions, and then death sentences of teenagers, it may further fuel rather than diminish enthusiasm for demonstrations.

Regime officials have begun using increasingly harsh rhetoric toward the protests, framing the demonstrations and the Shiraz terror attack as connected and parts of the Western-led hybrid war against Iran. Judiciary Chief Gholam Hossein Mohseni Ejei stated that individuals who participate in multiple protests are “in the enemy’s ranks” and thus subject to more severe sentences on October 31.[iii] Ejei ordered the judiciary to work with media services to identify individuals who attend multiple protests. Ejei did not provide a legal basis for this new standard of evidence, suggesting that the judiciary will prosecute some protesters as foreign agents under the presumption of guilt. Hardline parliamentarian Brigadier General Mohammad Esmail Kowsari threatened that the regime will intensify its crackdown on October 31.[iv] Kowsari is a retired Islamic Revolutionary Guards Corps (IRGC) officer who has historically supported and overseen brutal crackdowns on protesters.[v]

The regime is increasing its outreach to university students to placate student protesters. Parliament Speaker (and former IRGC Brigadier General) Mohammad Bagheri Ghalibaf met with university students to solicit criticisms and feedback on October 31.[vi] Ghalibaf stated his intent to hold such a meeting again. Iranian state media reported that Supreme Leader Ali Khamenei will meet with university students on November 2 as well.[vii] Khamenei will likely use the meeting to affirm the importance of students to the country and reiterate his harsh stance on the protests. These meetings come after Raisi administration spokesperson Ali Bahadori Jahromi visited universities on October 24 and 25 to discuss popular grievances, as CTP previously reported.[viii] Students heckled and chanted anti-regime slogans at Jahromi on both dates.

At least 30 anti-regime protests occurred in 17 cities in 14 provinces.

Note: CTP is changing the format of its presentation of regime activity to capture multiple protests within a single city when it can reliably distinguish different protest activities.

CTP assesses with moderate to high confidence that protests occurred in the following locations: 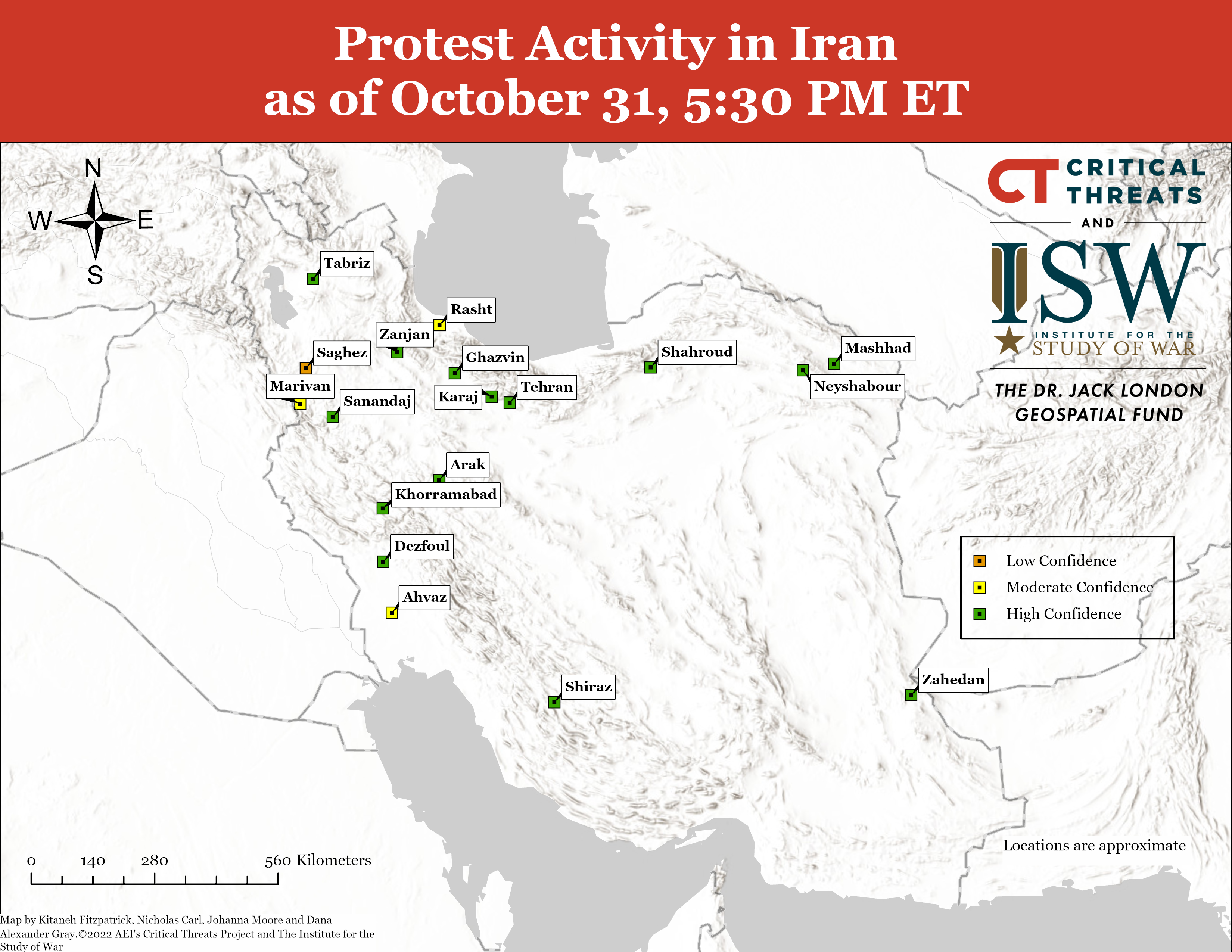 CTP assesses with moderate to high confidence that university students participated in anti-regime sit-ins in the following location:

Parliamentarian Mehdi Bagheri stated that the Law Enforcement Command (LEC) is not currently operating the guidance (morality) patrol because of manpower shortages on October 31.[xlii] Bagheri stated that the LEC is prioritizing managing the protests and cannot simultaneously operate the guidance patrol. Bagheri’s remarks reflect a key vulnerability in the regime’s security forces: the regime does not have enough security personnel to manage large-scale, countrywide protests.[xliii] CTP has previously reported on security forces facing bandwidth constraints, exhaustion, and low morale due to the extent and scale of the protests.[xliv]

Medical professionals in Kurdistan Province condemned the regime crackdown on October 31, according to unverified social media reports. Healthcare workers and professors from the Kurdistan University of Medical Sciences and various hospitals published open letters criticizing regime violence against students.[xlv] The healthcare workers called on security forces to leave hospitals, where they have reportedly deployed to arrest and identify injured protesters.[xlvi] The professors stated that they will not hold classes until the regime ensures student safety.[xlvii] Physicians have begun treating injured protesters in private homes so that the protesters can avoid clinics and hospitals, as CTP previously reported.[xlviii] Growing anti-regime sentiment among Iran’s medical community could lead more physicians to support protesters.

Moderate politician Abdol Nasser Hemmati tweeted criticizing President Ebrahim Raisi for his approach to the protests on October 30.[li] Hemmati stated that the Raisi administration’s failure to address social issues, improve people’s lives, and reform has caused the protests. Hemmati was the Central Bank of Iran governor in the Rouhani administration and ran against Raisi in the presidential election in June 2021.[lii] Hemmati’s criticism against Raisi reflects the more conciliatory tone that Iran’s moderates and reformists have adopted in addressing the protesters.

The Tehran Neighborhood Youth repeated its calls for protests on November 1 and 2.[liii]