The ongoing, anti-regime protests in Iran expanded significantly on October 26, occurring in at least 33 cities in 23 provinces. These protests are the most reported in a single day since CTP began publishing daily protest updates on September 28.[i] Thousands of Iranians took to the streets to commemorate the 40th day since the regime killed Mahsa Amini.[ii] Protesters shot and killed an IRGC intelligence officer in Maleyer, Hamedan Province, raising the death toll of security forces members to at least 33 since this protest wave began on September 16.[iii]

The largest gathering occurred in Saghez, Kurdistan Province—Mahsa Amini’s hometown and resting place. Iranian state media reported that around 10,000 individuals gathered in Saghez to commemorate Mahsa Amini, although the actual number could be higher.[iv] The regime blocked roads around Saghez to prevent protests.[v] Videos on social media depict mourners and protesters traveling on foot to the cemetery in Saghez, walking along roads and through fields.[vi] Security forces attacked and arrested protesters at the cemetery. [vii]

The regime will likely exploit a militant attack on a Shia shrine in Shiraz, Fars Province to deflate the protests. At least one gunman entered the Shah Cheragh Mosque in Shiraz and shot worshippers on October 26, killing around 15 and injuring around 40, according to Iranian state media.[xi] The Islamic State claimed responsibility for the attack although it is very unlikely that the Islamic State was directly involved in it.[xii]

The regime will use this attack to redirect Iranian public attention away from the protests and channel anger toward foreign adversaries such as the Islamic State and Saudi Arabia. Outlets affiliated with the Islamic Revolutionary Guards Corps (IRGC) and Supreme National Security Council (SNSC) reported that the gunman was a non-Iranian Wahhabist.[xiii] An IRGC-affiliated journalist claimed that Saudi Arabia ordered the attack and called on the IRGC to retaliate.[xiv] The regime may attack Islamic State positions abroad or Saudi Arabia in retaliation for the militant attack in Shiraz. The regime conducted ballistic missile attacks against Islamic State targets in eastern Syria after the group claimed responsibility for attacks in Iran in June 2017 and September 2018.[xv] The regime could do so again to draw public attention away from the protests. The regime also seeks to retaliate against Saudi Arabia for its alleged role in stoking the protests as CTP previously reported.[xvi]

The Islamic State is trying to capitalize on the shrine attack and protests to stoke instability and sectarian conflict in Iran. The Islamic State likely claimed responsibility for the attack opportunistically without having ordered or directly enabled it.[xviii] The attack does not match the typical Islamic State attack pattern, suggesting that the group may not have explicitly directed the attack. The attacker was not wearing a suicide vest and was captured wounded but alive--a very unusual occurrence for Islamic State terrorists. Islamic State statements claiming credit for the attack were also confused, offered no details other than those already available in the media when they were released and lacked the specificity that is common in claims of credit for attacks that the Islamic State actually directs. The Islamic State has previously claimed attacks opportunistically such as the Las Vegas shooting in October 2017.[xix] The Islamic State Khorasan Province expressed support for protesters fighting the regime on October 26 as well likely to further stoke sectarian divides.[xx] The effort to fuel sectarian violence has been a hallmark of the Islamic State and its predecessor, al Qaeda in Iraq, distinguishing it from al Qaeda affiliates that are usually more reluctant to stoke sectarian hostilities directly.

White House Press Secretary Karine Jean-Pierre and National Security Council spokesperson John Kirby stated that Russia may be advising the Iranian regime’s protest crackdown on October 26.[xxi] Moscow has extensive experience in protest crackdowns domestically and abroad. The Kremlin advised and supported the suppression of protests in Belarus in late 2020 and Kazakhstan in early 2022.[xxii] Russian security personnel participated directly in both of those crackdowns, but CTP has not yet observed indications that Russians are in Iran actively helping the regime crack down at the moment. 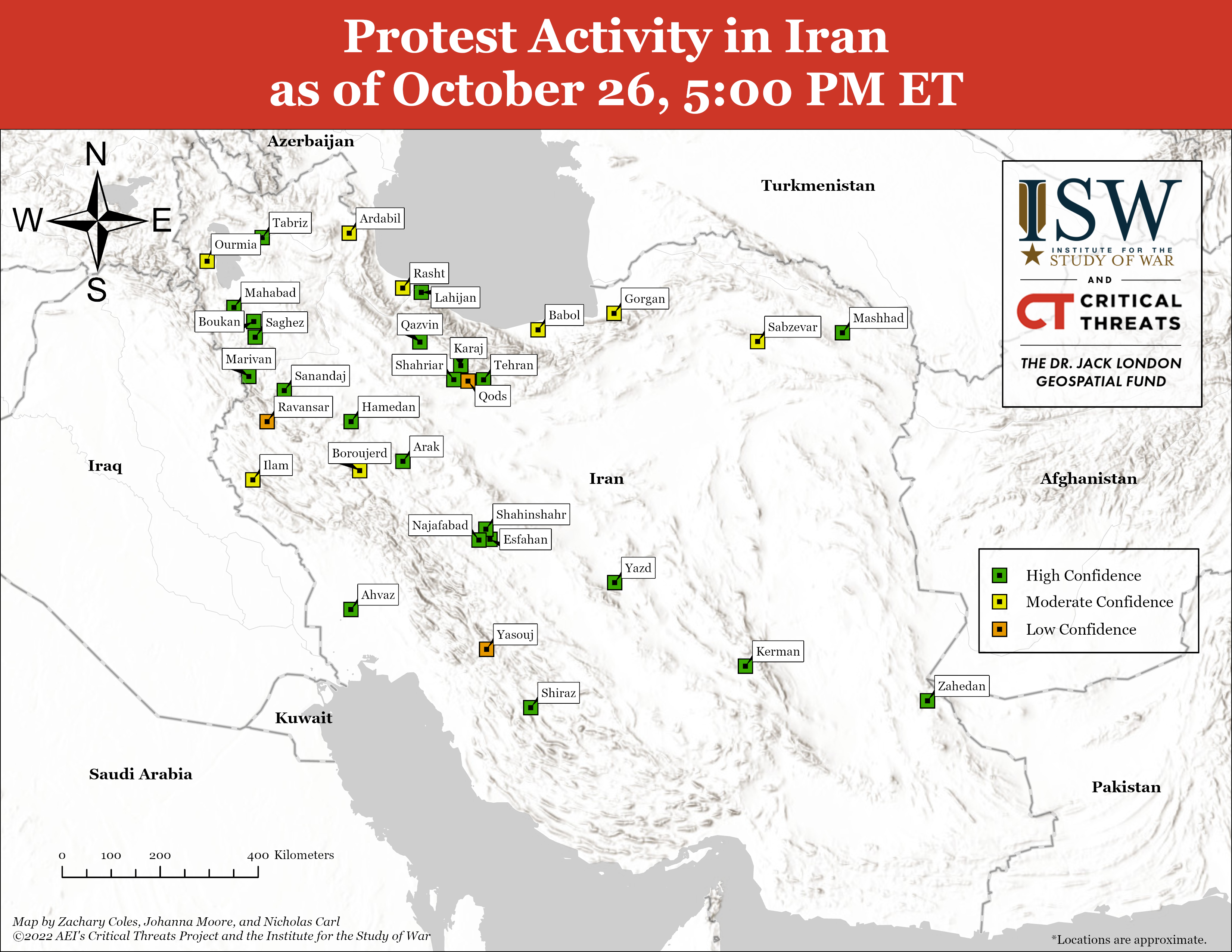 The Artesh Ground Forces plan to conduct an electronic warfare (EW) exercise around Esfahan on October 27.[lx] Iranian state media reported that the Artesh Ground Forces will practice offensive and defensive EW operations. The regime could use these exercises to disrupt electronic and satellite communications systems to further limit the free flow of information within and out of Iran.

Senior Iranian Sunni cleric Maulvi Abdol Hamid reiterated his support for the protesters in a private meeting with his inner circle on October 24, according to Reuters.[lxi] Abdol Hamid also called for the regime to recognize the rights of Iranian Baloch and Sunnis. CTP previously assessed that Abdol Hamid may emerge as a local protest leader in Zahedan, Sistan and Baluchistan Province.[lxii] Hamid has criticized Supreme Leader Ali Khamenei and the regime crackdown in recent days.[lxiii] Iranian security officials have accused Abdol Hamid of instigating protests in Zahedan.[lxiv]