Protest activity will likely increase—possibly significantly—on October 26 to commemorate the 40th day since the regime killed Mahsa Amini. Protest organizations such as the neighborhood youth groups have continued to call for countrywide demonstrations on October 26.[1] Many protest organizations continue to use revolutionary rhetoric in describing the planned demonstrations.[2] Iranians commonly hold a commemoration on the 40th day after a death. Anti-regime protests similarly erupted 40 days after security forces killed Neda Agha Soltan—a young Iranian protester—during the Green Movement in 2009.[3] Security forces killed Agha Soltan on June 20, 2009, and the commemoration was on July 30, 2009.[4]

The regime has likely prepared to preempt and crush the planned protests on October 26, especially given their potential to strengthen the protest movement. The regime will likely disrupt internet services and telecommunications in the early morning throughout Iran to stymie protester coordination and organization. The regime will also likely deploy security forces ostentatiously throughout major cities to deter and intimidate demonstrators and use force if the protests gain traction.

Protesters may coordinate further demonstrations against the Islamic Republic for the 40-day commemorations of other secular martyrs, such as Nika Shakarami and Sarina Esmail Zadeh, in this protest movement.[5] Forty days after Shakarami disappeared is October 30, and 40 days after Esmail Zadeh died is November 2.

CTP assess with low confidence that protests occurred in the following locations: 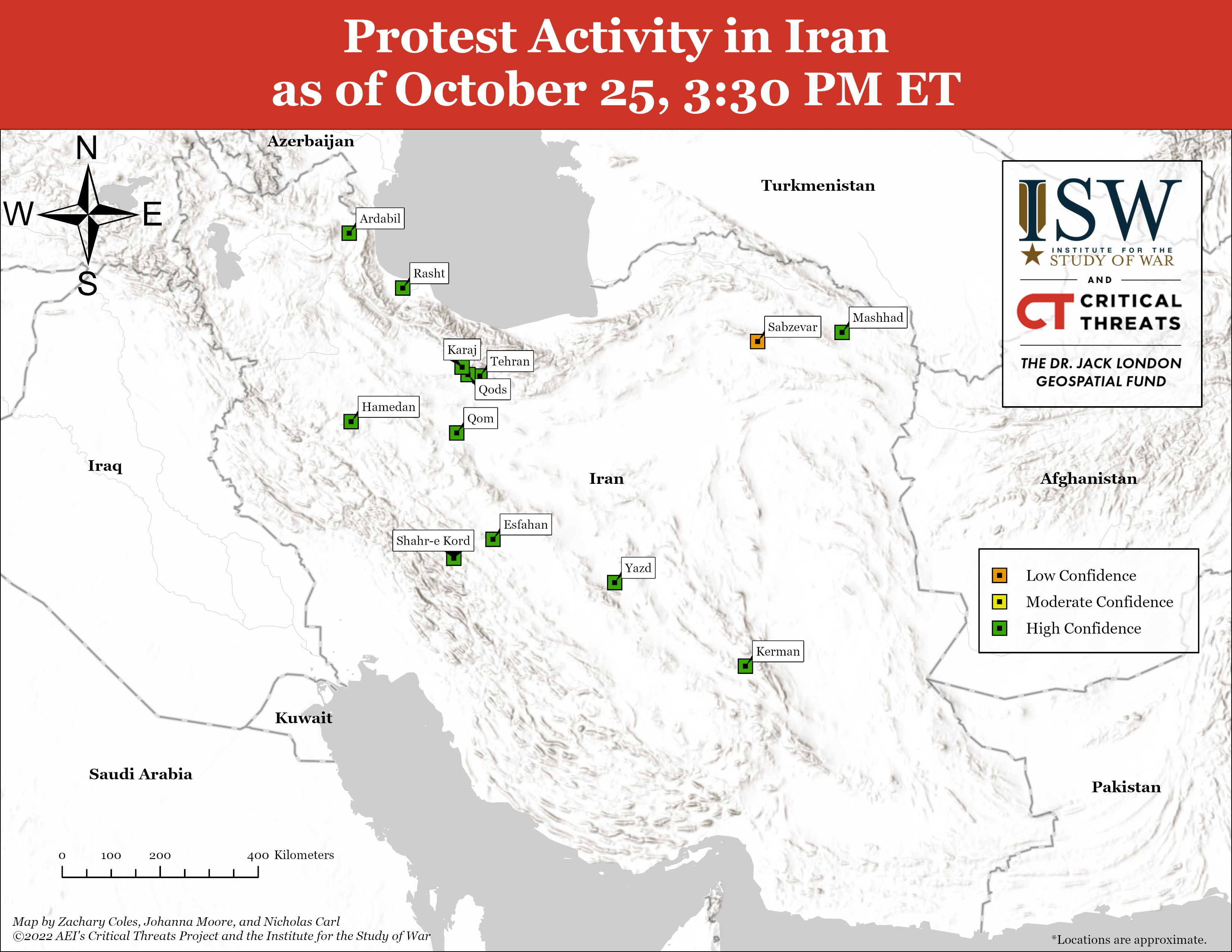 The IRGC announced that unidentified militants killed one IRGC member and one Basij member in Zahedan, Sistan and Baluchistan Province on October 25.[21] It is unclear whether protesters or anti-regime insurgents killed the security officers.

Tensions have increased between Iran and Azerbaijan in recent weeks over the latter allegedly hosting Israeli agents and trying to establish a land corridor connecting Azerbaijan proper to its Nakhchivan autonomous enclave.[24] An IRGC Telegram account called for the regime to economically and militarily support separatist movements in the Nakhchivan republic to join Iran on October 23.[25]