Expanding protests could strain Iranian state security services beyond their capabilities to respond in the coming days. Anti-regime protest organizations and social media accounts have called for protests in Khuzestan Province on October 14 and throughout the country on October 15. A group called the Youth of the Whole Country, which began tweeting on October 11, has repeated these calls and stated that it seeks to overthrow the regime.[i] The group added that it has coordinated with local protest leaders throughout Iran. Numerous other Persian-language social media accounts with similar naming conventions are circulating on Twitter, claiming to represent Iranian protesters in cities across the country.[ii] The Youth of Tehran Neighborhoods tweeted that the October 15 demonstrations will be “the beginning of the end [for the regime].”[iii]

CTP cannot verify that the authenticity of these groups or their claims to be leading protests in Iran. The Youth of the Whole Country notably states that its members are inside and outside Iran.[iv] These calls for protests on October 14 and 15 will likely bring more Iranians onto the streets in any event.

Such a scenario would strain the regime’s capability to suppress protests in major cities and border regions at the same time. The regime relies on relatively small numbers highly ideologically committed and well-trained security units for protest crackdowns, which introduces a vulnerability in the security apparatus: Iranian leaders do not have enough of these forces to cover all of Iran.[v] The regime has historically shuffled these elite security forces around the country to where they are needed most—typically the restive border regions. The regime has conducted brutal crackdowns on demonstrators in northwestern Kurdistan Province and southeastern Sistan and Baluchistan Province in recent weeks and is likely focused on preventing any insurgent groups from gaining traction in these regions. The regime may face the added pressure of trying to control protests in Khuzestan Province, where anti-regime violence is common, on October 14 and in major cities across Iran on October 15.

Simultaneous protests across Iran—in major cities and the border regions—could overwhelm security forces and prevent them from being able to control demonstrations in some locations. Such a scenario will not likely collapse the regime in itself, but it would certainly pressure it significantly.

Anti-regime protests occurred in at least 17 cities in 12 provinces on October 13. Social media reports suggest that commercial and industrial strikes continued in cities throughout Bushehr, Hormozgan, Kerman, Khuzestan, Kurdistan and Tehran Provinces,[vi] marking four days since oil and petrochemical workers in Bushehr and Khuzestan joined strikes and anti-regime protests.[vii]  CTP assesses with moderate or high confidence that protests occurred in the following locations: 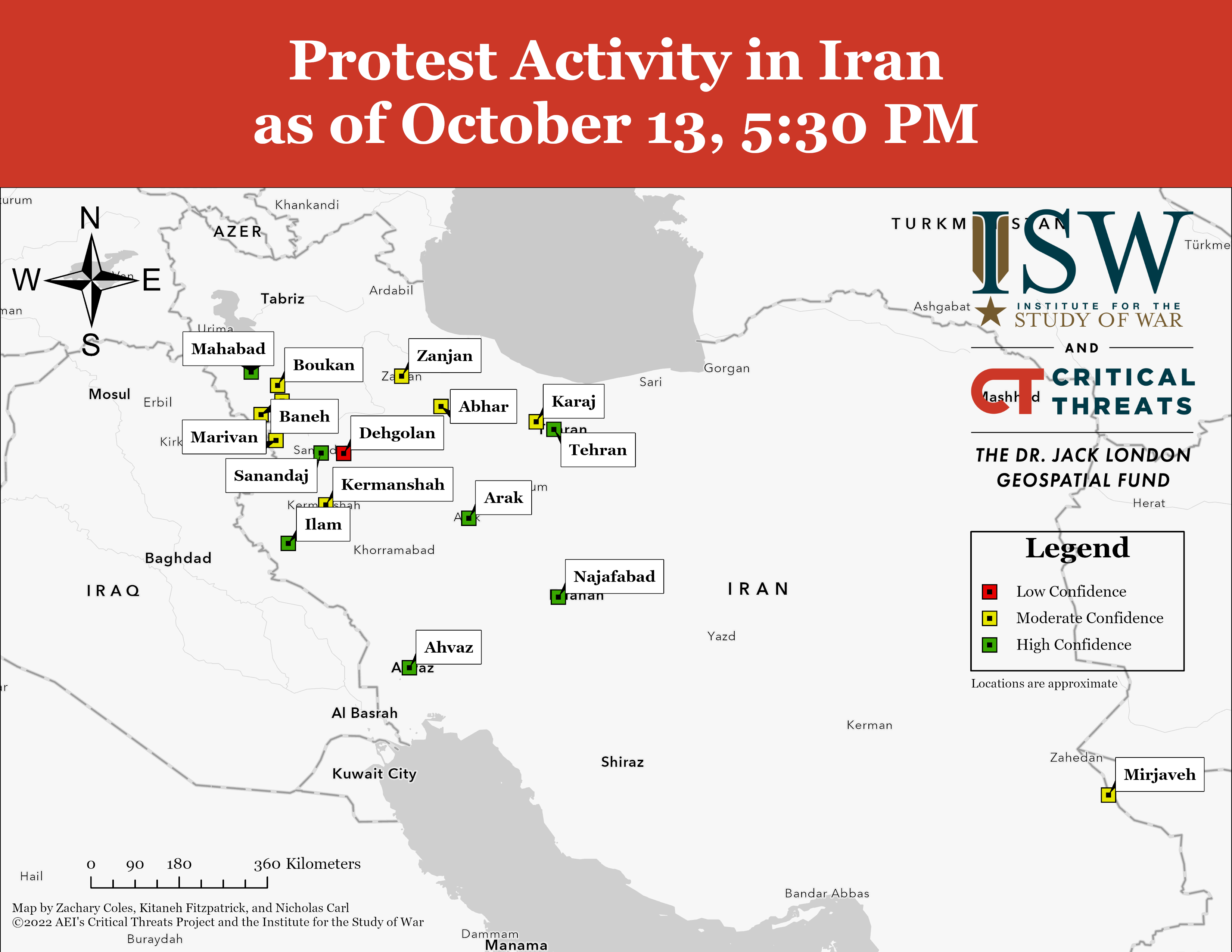 A Kurdish human rights group reported that Iranian authorities have arrested more than 2,180 people in Kurdistan Province since September 16.[ix] Security and intelligence officials have additionally arrested over 30 oil and petrochemical workers participating in strikes and anti-regime demonstrations since strikes began on October 10.[x] Supreme Leader Ayatollah Ali Khamenei pardoned and or commuted 1,862 prisoners’ sentences, including 218 prisoners with “security-related” charges on October 13.[xi] His website framed the pardons as a commemoration of the Prophet Mohammad birthday and Imam Jafar Sadegh.[xii]  Such pardons as part of commemorations are normal.

Senior Iranian officials rhetorically escalated against the US and its allies on October 13, echoing Khamenei’s comments blaming Iran’s enemies for ongoing protests on October 12.[xiii] IRGC Commander Hossein Salami and IRGC Aerospace Force Commander Amir Ali Hajizadeh framed ongoing protests as an ideological war driven by the US, the UK, Israel, and Saudi Arabia in meetings with university professors on October 13.[xiv] Hajizadeh added that Iran was monitoring its enemies’ military and defense capabilities.[xv] President Ebrahim Raisi similarly accused the US of pursuing policies aimed at destabilizing the regime at the Conference on Interaction and Confidence Building Measures in Asia member-state summit in Astana, Kazakhstan.[xvi] An IRGC-affiliated newspaper accused British diplomat Simon Shercliff of aiming to incite further unrest in Iran on October 13.[xvii] Politico similarly reported that multiple Iranian officials had privately warned the EU against imposing protest-related sanctions on Iran, stating that the ramifications would be “grave and that bilateral relations may not survive it.”[xviii]