Protests may increase in the coming days to commemorate the regime’s brutal crackdown in Zahedan, Sistan and Baluchistan Province on September 30. November 9 marks the 40th day since security forces indiscriminately shot and killed civilians, including children, as they gathered for Friday prayers and protested in Zahedan on September 30.[i] Protester death tolls from that day range from 66 to 96, although the actual number could be higher.[ii]  Iranian mourners and protesters have regularly gathered for 40-day commemorations for killed demonstrators in recent weeks and may do so again on November 9 for those killed in Zahedan.[iii] This commemoration is primarily a Shia tradition, and most of Sistan and Baluchistan Province’s population is Sunni. Protesters may still gather there and elsewhere throughout Iran on November 9 in solidarity with the people of Zahedan. Protest organizations have called for countrywide demonstrations, and especially in Zahedan, on Friday, November 11 as well.[iv] Friday protests have become common across Sistan and Baluchistan Province since the September 30 crackdown.[v]

[The following paragraph was also published in ISW’s Russian Offensive Campaign Assessment, November 8.] Iranian state-run outlet Nour News Agency reported that Russian National Security Council Secretary Nikolai Patrushev arrived in Tehran on November 8, likely to discuss the potential sale of Iranian ballistic missiles to Russia.[vi] Nour News Agency announced Patrushev’s arrival in an English-language tweet, stating Iranian Supreme National Security Council (SNSC) Secretary Ali Shamkhani invited Patrushev and noted that Patrushev will also meet with other high-ranking Iranian political and economic officials to discuss Russo-Iranian cooperation.[vii] Nour News Agency is affiliated with the SNSC. The SNSC likely announced Patrushev’s arrival in Iran to highlight the deepening cooperation between Moscow and Tehran to an international audience (rather than domestically), as well as to implicitly highlight that a high-ranking Russian official turned to Iran for help in Ukraine. Islamic Revolutionary Guards Corps (IRGC) Quds Force Commander Qassem Soleimani notably traveled to Moscow in 2015 to appeal to Russia to intervene in the Syrian Civil War.[viii] Tehran is likely eager to publicly signal this rebalancing of its strategic partnership with Moscow, especially to regional Iranian adversaries with which the Kremlin occasionally cooperates such as Israel and Saudi Arabia. Patrushev’s visit to Iran notably comes amid reports that the Iranian regime is seeking Russian help with protest suppression, although it is unclear if this will be discussed by Patrushev and his Iranian counterpart.[ix]

Patrushev’s visit comes amid some domestic criticism of Iranian military support to Russia. Masih Mohajeri—the editor of Iranian newspaper Jomhouri Eslami—criticized on November 7 the regime’s decision to support the Kremlin.[x] Mohajeri added that the regime should have told Russia not to use Iranian drones in Ukraine. Mohajeri’s remarks reflect the reservations among some in Iran about pursuing the strategic partnership with Moscow that Supreme Ali Khamenei has supported.

At least 12 protests took place in nine cities across eight provinces on November 8. CTP assesses with moderate to high confidence that protests occurred in the locations below. 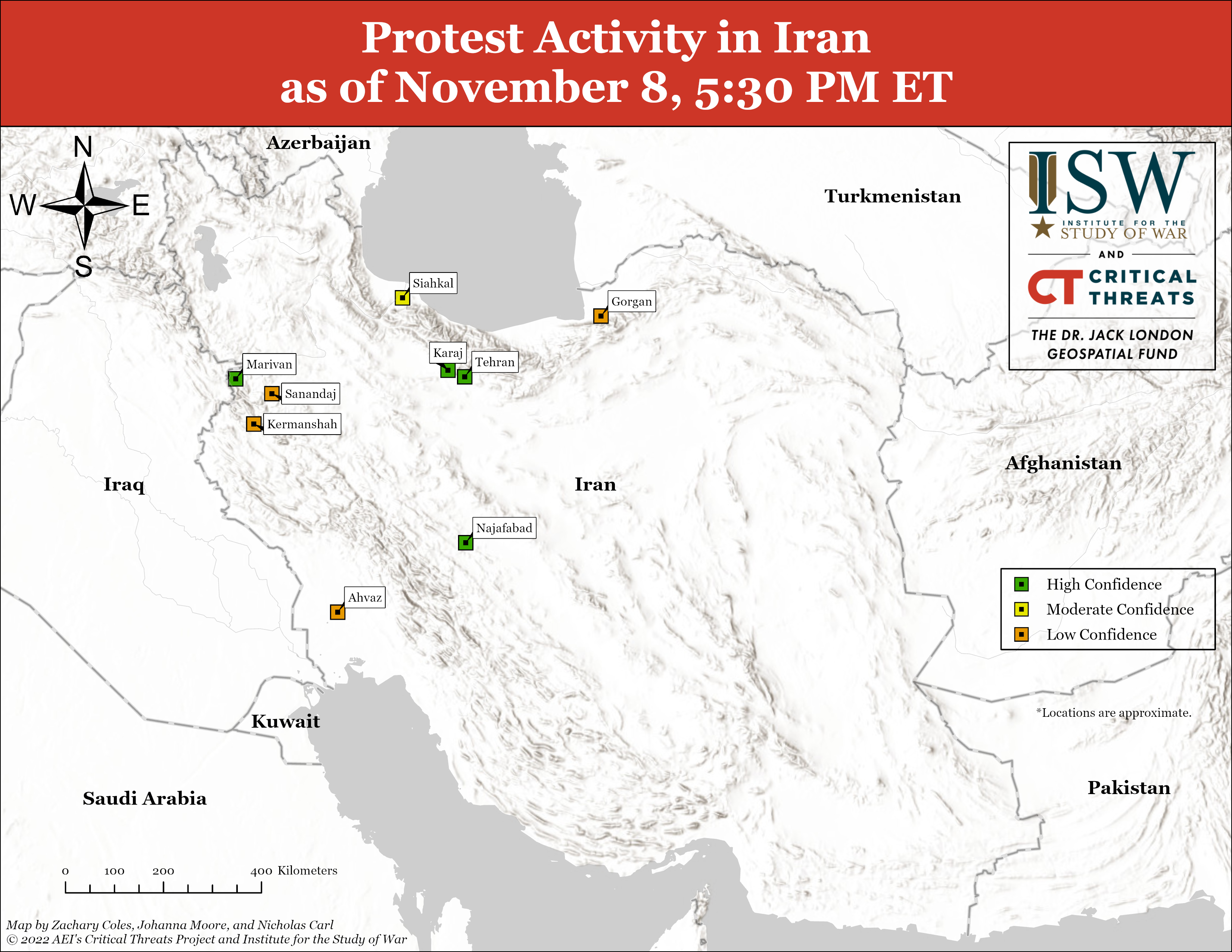 Jaish al Adl spokesperson Hossein Baloch claimed that the regime crackdown in Zahedan on September 30 has increased the group’s recruitment, according to UK-based Midstone Centre.[xxiii] Jaish al Adl is a Salafi-jihadi militant group operating around the Iran-Pakistan border. CTP cannot verify this report. Jaish al Adl has called for armed resistance against the regime and expressed support for the protests in recent weeks, as CTP previously reported.[xxiv]

The IRGC may have deployed some of its Iraqi proxies to support the protest crackdown. Five buses carrying Iraqi militants crossed the border into Iran from Iraq on November 6, according to a UK-based human rights organization.[xxv] The Iraqi militants allegedly traveled through the Mehran border crossing, which is also the location of a prominent IRGC Quds Force headquarters that oversees some operations in Iraq.[xxvi] CTP cannot verify the reports of Iraqi militants traveling to Iran.

SNSC-affiliated Nour News Agency accused unnamed American and Mossad officials of meeting with anti-regime Kurdish militant groups in Iraqi Kurdistan over the past two months on November 8.[xxvii] Nour News Agency claimed that these parties met to plan operations against the regime.

Intelligence and Security Minister Esmail Khatib threatened the UK for hosting anti-regime outlet Iran International on November 8.[xxviii] Khatib added that the regime now views communicating with Iran International as cooperating with terrorists and threatening national security. Khatib’s remarks follow reports of an IRGC threat to two British-Iranian journalists working for Iran International in London. The London Metropolitan Police informed them that the IRGC posed an “imminent, credible, and significant [threat] to their lives and those of their families.”[xxix]

Armed Forces General Staff spokesperson Brigadier General Abol Fazl Shekarchi emphasized the need for the regime to communicate its ideology and narratives to Iranian youth via the media on November 8.[xxxi] Shekarchi accused the US of conducting a hybrid war against the Islamic Republic to create societal divisions and unrest. He added that pro-regime journalists are on the frontline fighting against the United States’ “soft war” against Iran. The Iranians use this term, “soft war,” to refer to the West’s perceived use of nonmilitary means, such as economic and psychological pressure and information operations, to erode the regime’s legitimacy, cultivate domestic opposition, and propagate Western values in Iran. Shekarchi made these remarks while meeting with media officials in Bushehr Province.

Economic Affairs and Finance Minister Ehsan Khandouzi stated on November 8 that the protests have contributed to the depreciation of the Iranian rial. The Iranian rial dropped to an all-time low of around 366,500 to the US dollar on November 7.[xxxii] Khandouzi stated that the Central Bank of Iran will try to stabilize the rial in the coming days, possibly by injecting hard currencies such as the dollar into the market.

[xxvi] See Michael R. Gordon and General Bernard E. Trainor’s The Endgame: The Inside Story of the Struggle for Iraq, from George W. Bush to Barack Obama