Correction: CTP has edited this text to correct two errors. A previous version of this update reported that security forces used nerve gas against protesters in Javanroud. They used hexachloroethane, according to social media reports, and CTP has adjusted the text to reflect this reporting. A previous version of this update also incorrectly reported old protests in Ghorveh and Tehran as happening on November 21. We have removed these protest entries from this day’s update and map.

The Iranian regime has adopted what increasingly resembles a counter-insurgency approach rather than a counter-protest one to manage the ongoing unrest. Islamic Revolutionary Guards Corps (IRGC)-affiliated Tasnim News Agency reported that IRGC Ground Forces are clearing some cities in West Azerbaijan Province, including Boukan, Mahabad, Oshnaviyeh, Piranshahr, and other unnamed locations, of anti-regime elements on November 21.[1] These IRGC military units are likely using extreme force and indiscriminately killing civilians to quell protests. Security forces are conducting a brutal crackdown in Javanroud, Kermanshah Province as well. Security forces have isolated Javanroud, blocking major roads into the city, and shot live ammunition and the chemical compound hexachloroethane at protesters, according to social media reports.[2] The closure of these major roads will impede most travel into and out of Javanroud given the rugged terrain surrounding the city. The IRGC Ground Forces 4th Ansar ol Rasoul Operational Brigade is headquartered in Javanroud and could support the regime crackdown there and in nearby locations.[3] This increasing regime brutality accords with CTP’s previous assessment that Supreme Leader Ali Khamenei has likely greenlit the security forces to intensify their crackdown.[4] 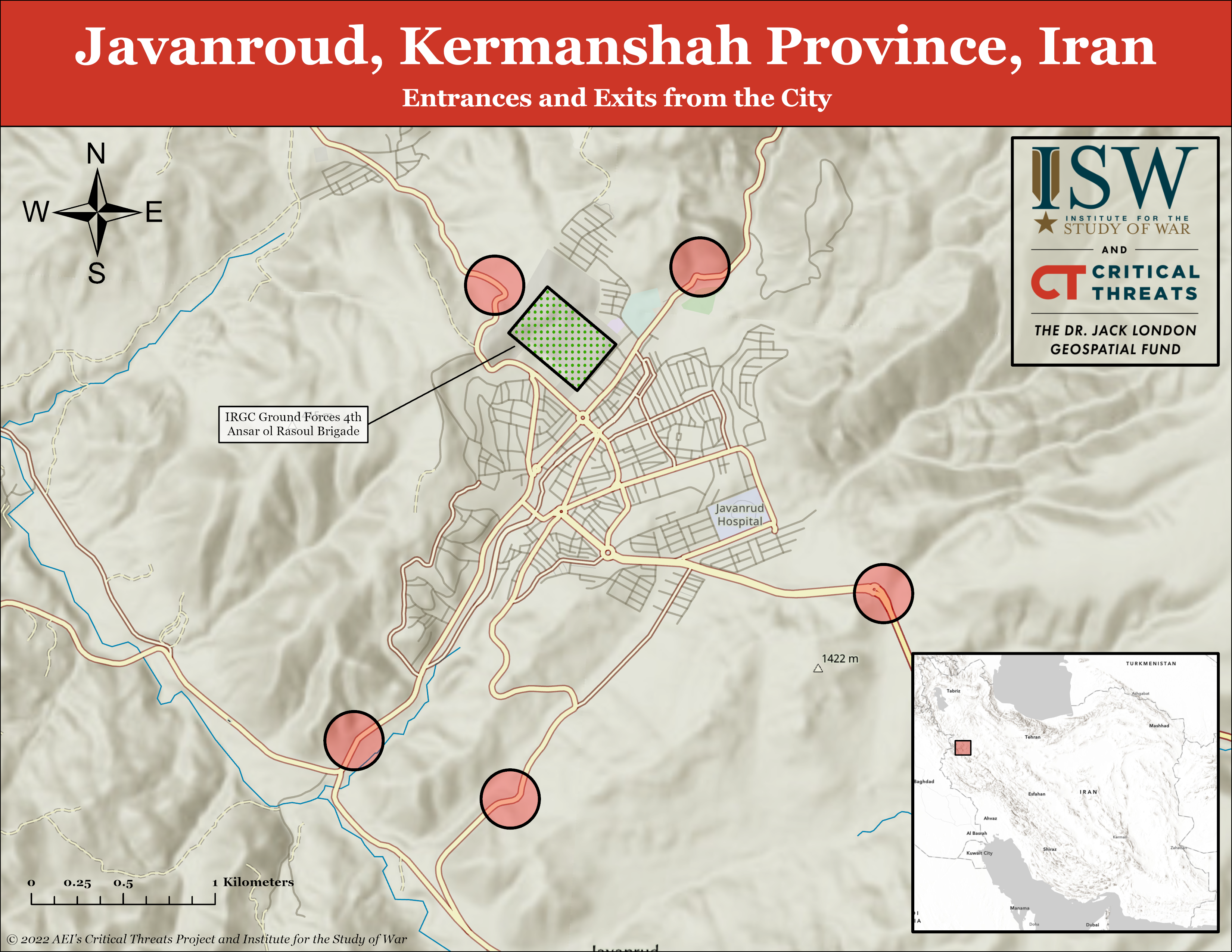 The regime has likely lost control of parts of northwestern Iran at least temporarily. The deployment of the IRGC Ground Forces indicates the Iranian political and security leaders consider the protests an increasingly serious threat to regime survival. Tasnim News Agency reported that security forces managed to restore order to Piranshahr (although this claim could be exaggerated) but admitted that anti-regime elements are continuing to operate around the peripheries of the city.[5] The regime maintains a significant presence of Artesh and IRGC units in northwestern Iran; failure to control this region suggests that the regime may face even greater challenges in other locations throughout the country. The regime may face a particularly acute challenge in Sistan and Baluchistan Province, where anti-regime militancy and protests have increased in recent weeks.[6]

The regime has expanded its internet and telecommunications disruptions, limiting the amount of open-source information available on the situations in northwestern and western Iran. Netblocks and journalists reported major internet disruptions, especially around Kurdistan Province, on November 21.[7] CTP nevertheless recorded at least 16 protests in 12 cities in eight provinces on November 21, and the actual number is likely greater.

Iranian ambassador to Iraq Mohammad Kazem Al-e Sadegh issued an ultimatum with a deadline in 10 days for Iraq to disarm Kurdish militant groups or face unspecified consequences on November 21. Iranian and Turkish military forces will likely intensify their attacks against Kurdish militants in Iraqi Kurdistan and northern Syria in the coming days. Turkish President Recep Tayyip Erdogan announced on November 21 that his Defense Ministry is evaluating resources needed for a ground invasion into Iraq and Syria.[10]

The Iraqi government lacks the political will and capability to fulfill Iran’s demands, as CTP has previously assessed.[11] Kurdish political blocs have called for a special Parliamentary session on November 22 to address Iranian and Turkish airstrikes into Iraqi Kurdistan and have called on the international community to provide air defense systems to protect against future threats.[12] Pro-Iranian political blocs in Baghdad are reportedly attempting to prevent the session from taking place.[13]

At least 13 protests took place in 11 cities across eight provinces on November 21. Substantially more protests likely occurred than the 16 listed below, but regime internet and telecommunication disruptions have inhibited the flow of information out of Iranian cities. CTP assesses with moderate to high confidence that protests occurred in the locations below.

Note: CTP has revised how it presents protest data to make it easier for readers to review. We are identifying different properties, such as size, for each recorded protest. We define small protests as fewer than 100 individuals, medium protests as between 100 and 1,000, and large protests as over one thousand. CTP will continue revising this approach to optimize how we present information in the most accurate and accessible way possible. 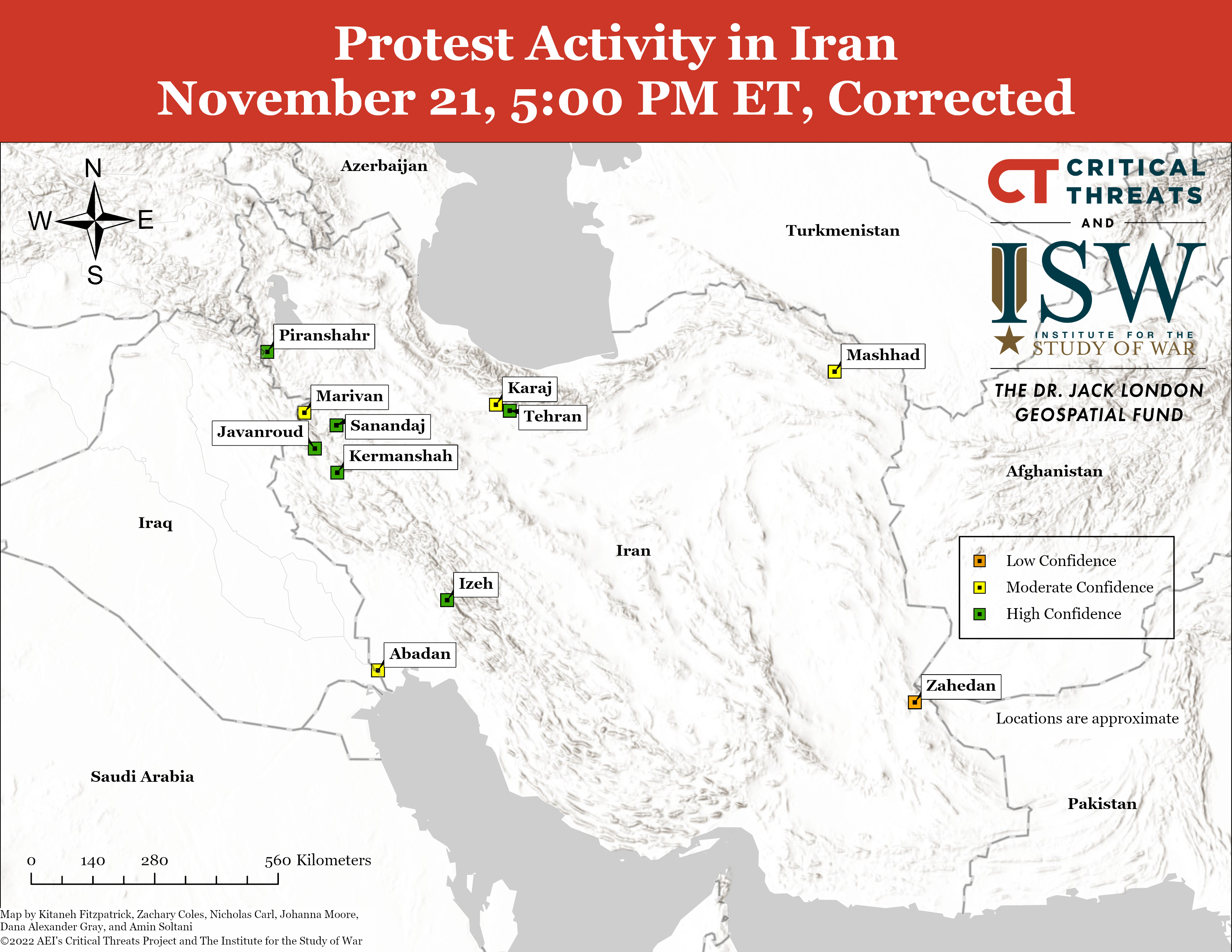 President Ebrahim Raisi and his cabinet approved the nomination of Alireza Fakhari as Tehran provincial governor on November 20.[27] Fakhari is an IRGC officer who has held several government positions and was a senior official in the Khatam ol Anbia Construction Headquarters —the IRGC’s civil engineering and construction firm. Raisi has appointed numerous IRGC officers to senior positions in the cabinet and to local governments since taking office in August 2021.[28] Fakhari replaced Mohsen Mansour, whom Raisi appointed as executive vice president on November 1.[29] These appointments may be enabling greater IRGC influence over the protest crackdown.[30] Provincial governors are part of the provincial security councils, which oversee domestic security in their jurisdictions.

Social media rumors claimed on November 20 that low-level IRGC and LEC security personnel throughout Iran have expressed concerns about the safety of themselves and their families amid mounting security forces casualties.[31] CTP cannot verify these rumors. They are plausible, however, given the increased rate at which security personnel are dying and being injured. Unidentified gunmen most recently shot and killed one LEC personnel and injured another around Zahedan, Sistan and Baluchistan Province on November 21.[32]

LEC Fars Provincial Commander Brigadier General Roham Bakhsh Habibi announced the arrest of eight members of the Shiraz Neighborhood Youth on November 21.[33] Bakhsh Habibi accused the group of directing and stoking protests, making explosives, and cooperating with anti-regime group Mojahedin-e Khalq. These arrests demonstrate further that at least some of the neighborhood youth groups have a local presence. Iranian state media previously reported on November 17 that the IRGC Intelligence Organization arrested over 25 members of the Oroumiyeh Neighborhood Youth.[34] There are many different social media accounts that identify as the Shiraz Neighborhood Youth, making it difficult to determine whether the arrests have impcated the group’s operations.

Several dozen Sunni clerics and religious leaders in Kurdistan Province issued a video statement on November 21 expressing support for the protesters.[35] The individuals called for a public referendum on the Islamic Republic. The clerics showed their faces allowing their easy identification and risking regime punishment for their actions. Prominent Sunni cleric Moulana Abdol Hamid, who has incited protests in Sistan and Baluchistan Province in recent weeks, may have inspired these Sunni clerics and religious leaders. Abdol Hamid similarly called for a referendum on the Islamic Republic on November 4.[36] The video statement may indicate that Abdol Hamid’s rhetoric is resonating even with Iranian Sunnis outside of Sistan and Baluchistan Province.

Supreme Leader Military Adviser IRGC Major General Yahya Rahim Safavi stated that protests will continue unless the regime addresses the people’s frustrations on November 21.[37] Safavi made these remarks while speaking at the Imam Hossein University—one of the IRGC’s most prominent military universities. Safavi’s comments are somewhat surprising given that one might expect him to use harsher rhetoric speaking to fellow guardsmen while the regime intensifies its crackdown. Iranian political and security leaders may increasingly blame the Raisi administration if it cannot improve the economy. Safavi may be reflecting the supreme leader’s position, or what he believes the supreme leader’s position to be.

The national Iranian men’s soccer team refused to sing the Iranian national anthem before their opening FIFA World Cup match on November 21.[38] Their silence was resonant and well-publicized given the popularity of soccer in Iran, despite Iranian state media not airing the players standing quietly. This act was especially humiliating to the regime given the location of the World Cup in Qatar—a country that has tried to balance its relations between Iran and other Arab states throughout the Middle East. Some social media accounts have claimed that Qatari security officers detained some World Cup attendants protesting against the Islamic Republic.[39]