Protest activity continued to surge on November 16, occurring in at least 29 cities in 19 provinces. Protests will likely continue throughout Iran on November 17—the final day of the three-day commemoration of the Bloody Aban protest wave in November 2019—and concentrate in Sistan and Baluchistan on Friday, November 18. Security forces are continuing to crack down and use lethal force but are not using their full capabilities, likely to avoid angering protesters further and creating more 40-day commemoration ceremonies around which demonstrators will rally. The regime continues to seem like it does not have a coherent theory about how to address the protests, likely due to disagreements within the political and security establishment.

Supreme Leader Ali Khamenei’s efforts to discourage prominent Sunni cleric Moulana Abdol Hamid from publicly criticizing the regime have likely failed. Abdol Hamid tweeted on November 16, criticizing the clerical delegation that Khamenei sent to Sistan and Baluchistan Province.[i] The delegation—led by Friday Prayer Leader Policy Council Chairman Mohammad Javad Haj Ali Akbari—met with Abdol Hamid and other local leaders likely to communicate Khamenei’s directive to stop instigating protests in the province.[ii] Abdol Hamid accused the delegation of intimidating and threatening people rather than consoling them in his tweet. Abdol Hamid’s public criticism days after meeting the delegation indicates that he will continue publicly condemning the regime crackdown and supporting protesters. Abdol Hamid and his supporters will likely inspire further protests throughout Sistan and Baluchistan Province during his Friday sermon on November 18 as they have done almost every Friday since the brutal regime crackdown in Zahedan on September 30.[iii]

A false claim is circulating online that the Iranian Parliament has sentenced 15,000 arrested protesters to death. Many online users, including Canadian Prime Minister Justin Trudeau, have propagated this misinformation unwittingly.[iv] This claim is based on the actual reporting that 277 parliamentarians signed a letter calling for the judiciary to harshly and rapidly prosecute arrested protesters on November 6.[v] The judiciary has sentenced at least five protesters to death thus far and will likely execute more, but the regime has not likely decided to kill 15,000 arrested protesters. This misinformation is distracting public attention from the atrocities and human right violations that the regime is actually committing against its people.

At least 37 protests took place in 29 cities across 19 provinces on November 16. CTP assesses with moderate to high confidence that protests occurred in the locations below. 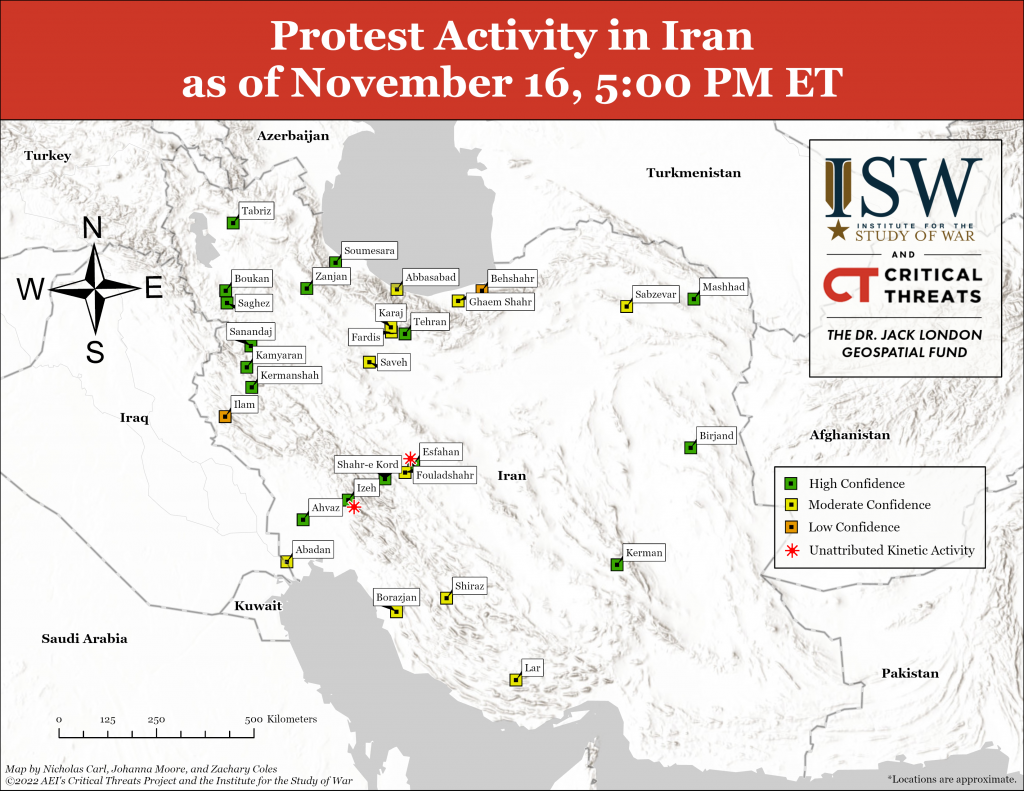 BBC published on November 15 a purported leaked audio tape revealing internal disagreements within the regime over the cause of and correct response to the protests.[xliii] BBC has not indicated how it authenticated and obtained the recording nor can CTP independently verify its authenticity. The recording, nevertheless, has no obvious indications that it is doctored or fake.

A senior Intelligence and Security Ministry official stated in the recording that internal disagreements have paralyzed the regime response to the protests.[xliv] These remarks accord with CTP’s previous assessment that regime indecision and infighting has confused its response to the protests.[xlv] The official also acknowledged that domestic issues and the regime’s brutality—rather than foreign influence and subversion—have driven many of the protests in recent weeks.

Unidentified gunmen shot and killed at least six people and injured at least 15 at a shopping center in Izeh, Khuzestan Province on November 16.[xlvi] The victims include several men and at least one woman and one child. Two of the victims were Basij members. Iranian state media described the attackers as a “terrorist team.” It is unclear who is responsible for the attack. CTP recorded protest activity in Izeh for the first time on November 15.[xlvii]

Unidentified gunmen shot at Basij and Law Enforcement Command (LEC) personnel, killing two, in Esfahan City, Esfahan Province on November 16.[xlviii] It is unclear who is responsible for the attack.

The LEC arrested an individual making Molotov cocktails and toxic chemicals in Tehran City, Tehran Province on November 16.[xlix] The individual was reportedly preparing these materials in exchange for 30 billion tomans (roughly $828,000) from an unknown source.

The judiciary sentenced three protesters to death on November 16.[l] The judiciary accused two of these individuals of attacking or threatening to attack security forces and the third of blocking roads and damaging public property. The convicted individuals can appeal these sentences. The judiciary has issued the death penalty for at least five protesters thus far since the protests began on September 16.[li]

The Islamic Revolutionary Guards Corps (IRGC) or one of its proxies likely conducted a kamikaze drone attack on an Israeli-owned tanker in the Gulf of Oman on November 16.[lii] Tehran likely sought to retaliate for recent Israeli airstrikes in Syria and Israel’s perceived role in stoking protests. The IRGC has increasingly attacked commercial vessels in the Persian Gulf and Sea of Oman as part of its regional escalation cycle with Israel since 2021.[liii] The use of a Shahed-136 kamikaze drone in the attack is noteworthy given recent indications that Israel may support Ukraine in countering Russia’s use of these same Iranian-made drones.[liv]

Kurdish military and political groups in Iraq and Syria may face increasing attacks from Iran and Turkey simultaneously. The IRGC resumed its attacks on anti-regime Kurdish militants in Iraqi Kurdistan on November 14 in retaliation for their perceived role in stoking protests.[lv] Iranian military leaders affirmed that they would continue attacks until these groups are unarmed or expelled from the border region. Turkish leaders have separately accused the Kurdistan Workers’ Party of conducting the terrorist attack in Istanbul on November 13 and vowed to attack Kurdish targets in northern Syria in response.[lvi]