This protest turnout across an increasing number of cities in southeastern Iran accords with CTP’s previous assessment that prominent Sunni cleric Moulana Abdol Hamid and his supporters may begin inspiring protests throughout Sistan and Baluchistan Province rather than in just Zahedan.[iii] Abdol Hamid again criticized the regime and expressed support for protesters during his Friday sermon in Zahedan on November 11.[iv] Abdol Hamid also commended Chabahar parliamentarian Moinoddin Saeedi, who criticized on November 9 the regime protest crackdown.[v] Abdol Hamid’s message may be resonating with a growing portion of the Sunni Baloch community in southeastern Iran.

US defense officials continue to warn of a potential Iranian attack into Saudi Arabia or Iraq in retaliation for the alleged roles of the US, Israel, and Saudi Arabia in stoking the protests. Two Defense Department officials told Politico that Iran continues to plan to attack Saudi Arabia, likely targeting its energy infrastructure, and that Iran also poses an increased threat to targets in Iraq.[vi] US and Saudi officials previously warned of an imminent Iranian attack on Saudi Arabia and Iraq in a Wall Street Journal report on November 1, though the disclosure of this intelligence may have delayed the Iranian attack.[vii] Islamic Revolutionary Guards Corps (IRGC) Deputy Commander Brigadier General Ali Fadavi repeated the threat that the regime will retaliate against foreign and domestic actors who stoked the protests on November 11.[viii]

Iran may have already tried and failed to attack US positions in Syria on November 9. Syrian media outlet DeirEzzor24 reported that Russian military police arrested two individuals tied to the IRGC who were preparing to conduct a rocket attack on US forces at the Conoco gas field in eastern Syria.[ix] Iranian-backed militias have attacked this location previously.[x] CTP previously assessed that Tehran and its proxies may attack US positions in Iraq and Syria in retaliation for the alleged US role in stoking protests and for an Israeli drone strike on an Iranian convoy in eastern Syria on November 8.[xi] CTP cannot verify the report from DeirEzzor24, however. 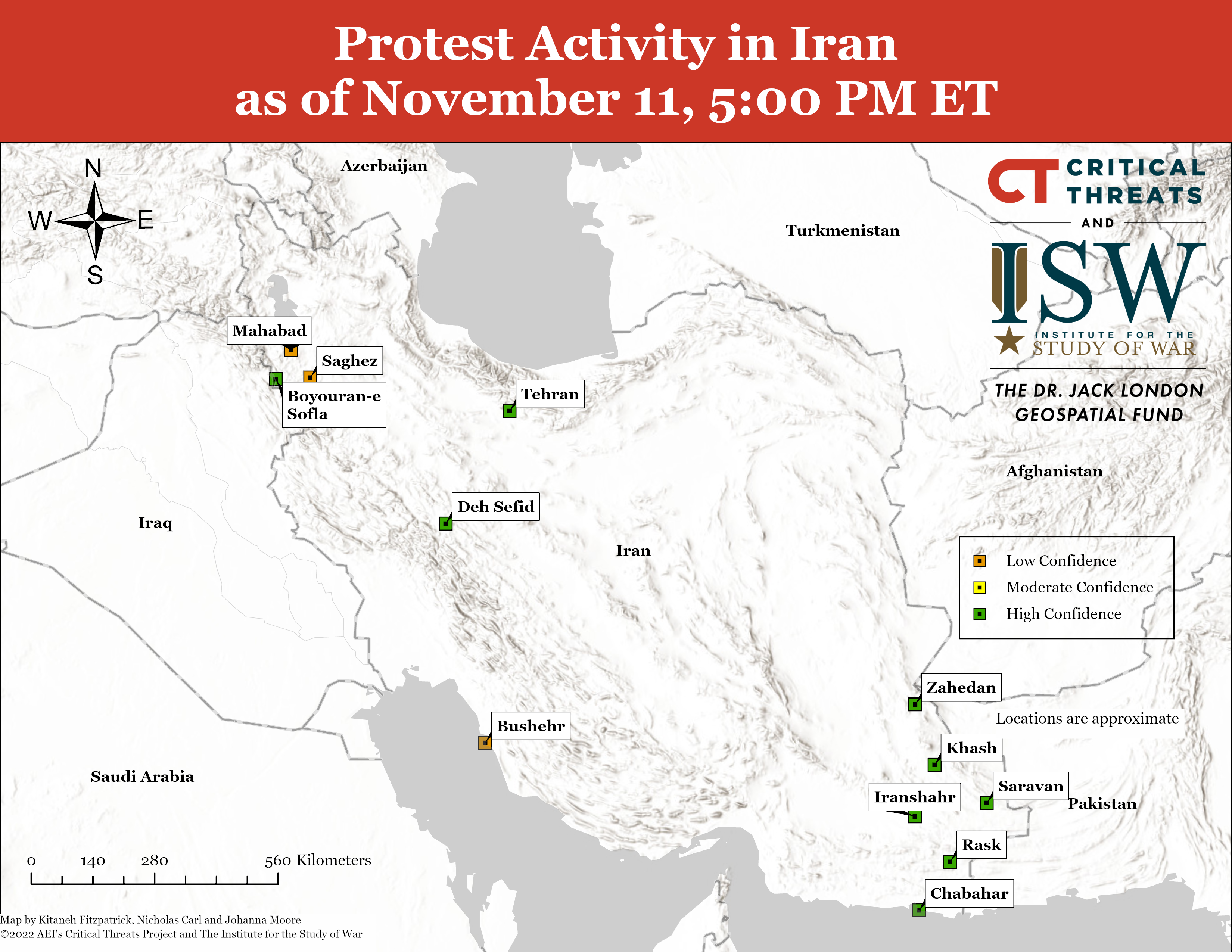 At least 14 protests took place in 12 cities across six provinces on November 11. CTP assesses with moderate to high confidence that protests occurred in the locations below.

A parliamentarian representing Chabahar, Sistan and Baluchistan Province denied reports that he had resigned from his post. Moinoddin Saeedi stressed his commitment to fighting for his constituents’ rights and improving their quality of life. Some social media users reported that Saeedi had resigned from his post on November 10.[xxvi] State-affiliated media circulated Saeedi’s comments.[xxvii] Saeedi had previously criticized security forces’ protest crackdown in Zahedan, Sistan and Baluchistan Province on September 30 in a parliamentary address on November 6.[xxviii]

Reformist parliamentarian Gholamreza Nouri Ghazaljeh criticized the regime for allowing security and law enforcement personnel to enter university campuses on November 11. Ghazaljeh emphasized that all students should be permitted to speak their minds and called on security forces who had entered university campuses to be held accountable.[xxix] Iranian university students have reported increased security presence in academic spaces throughout the Mahsa Amini protest wave, as CTP has previously noted.[xxx]

Parliament-affiliated Islamic Consultative Assembly News Agency (ICANA) published an article questioning the authenticity of a picture of a letter signed by 227 parliamentarians advocating for harsh protester sentencing.[xxxi] ICANA cited factual inaccuracies—including the names of ex-parliamentarians listed as signatories—as evidence to its claim that the letter is fake. Social media users circulated a picture of the letter on November 11. Signatories signed the letter on November 6, as CTP previously reported.[xxxii]

The IRGC Intelligence Organization issued a statement on November 11 warning that anti-regime group Mojahedin-e Khalq is contacting citizens to incite protests and the destruction of public property.[xxxiii]

Azerbaijani President Ilham Aliyev emphasized the need to ensure the “rights, freedom, and security” of Azeris living outside of Azerbaijan—possibly a veiled reference to the Azeri communities in northwestern Iran although possibly referring in addition or instead to Azeris still in Armenian-controlled areas or in the Azeri exclave of Nakhchivan—on November 11.[xxxiv]  Aliyev expressed his commitment to ”helping our compatriots, who have been separated from the Azerbaijani state by an unfortunate twist of fate...” Aliyev made these remarks at a summit of the Organization of Turkic States in Uzbekistan. Iranian authorities have repeatedly accused foreign actors of using the protests to drive separatism and erode the country’s territorial integrity in recent weeks.[xxxv] Aliyev’s comments follow IRGC social media accounts calling for Iran to annex parts of Azerbaijan, as CTP previously reported.[xxxvi]