The regime continued linking the ongoing protests with terrorism on November 6 as part of an information operation to delegitimize protesters and their grievances. Parliament Speaker Mohammad Bagher Ghalibaf accused the US and Israel of stoking the protests to create a new ISIS in Iran.[i] A group of 227 parliamentarians signed a letter similarly blaming the US for the unrest and comparing protesters to ISIS militants, calling for harsh and rapid prosecutions.[ii] Islamic Revolutionary Guards Corps (IRGC) Telegram channels previously characterized protesters as ”domestic ISIS” on November 3, as CTP previously reported.[iii]

The regime will likely use this framing of protesters as terrorists to justify brutal crackdowns and harsh judicial sentences in the days and weeks ahead.[iv]

Iranian state media has claimed that the regime has arrested terrorists trying to support the protests throughout the country, including reporting that security forces arrested “terrorist teams” in Esfahan, Fars, Kermanshah, and Khuzestan provinces on November 6.[v] Iranian state media claimed that these groups sought to organize and stoke protests and assassinate prominent Arab leaders in Khuzestan Province.[vi] Law Enforcement Deputy Commander Ghassem Rezaei claimed on November 5 that the regime has arrested dozens of individuals tied to the Shiraz attack.[vii] Rezaei stated that these individuals planned large-scale sabotage and suicide operations in Iran. CTP cannot verify whether the regime arrested anyone in these reported incidents.

A security officer killed four Law Enforcement Command (LEC) members at an LEC station in Bampour, Sistan and Baluchistan Province on November 6.[viii] Iranian state media framed the incident as a “personal dispute” between the officers. The brutality and intensity of the protest crackdown may be stoking tensions between security personnel, especially as they face bandwidth constraints, exhaustion, and low morale in the eighth consecutive week of protests.[ix]  Anti-regime militancy has increased in the areas surrounding Bampour in recent days, as CTP previously reported.[x] CTP has not yet observed large-scale defections or division among the state security services.

At least 17 protests took place in 10 cities across eight provinces on November 6. CTP assesses with moderate to high confidence that protests occurred in the following locations: 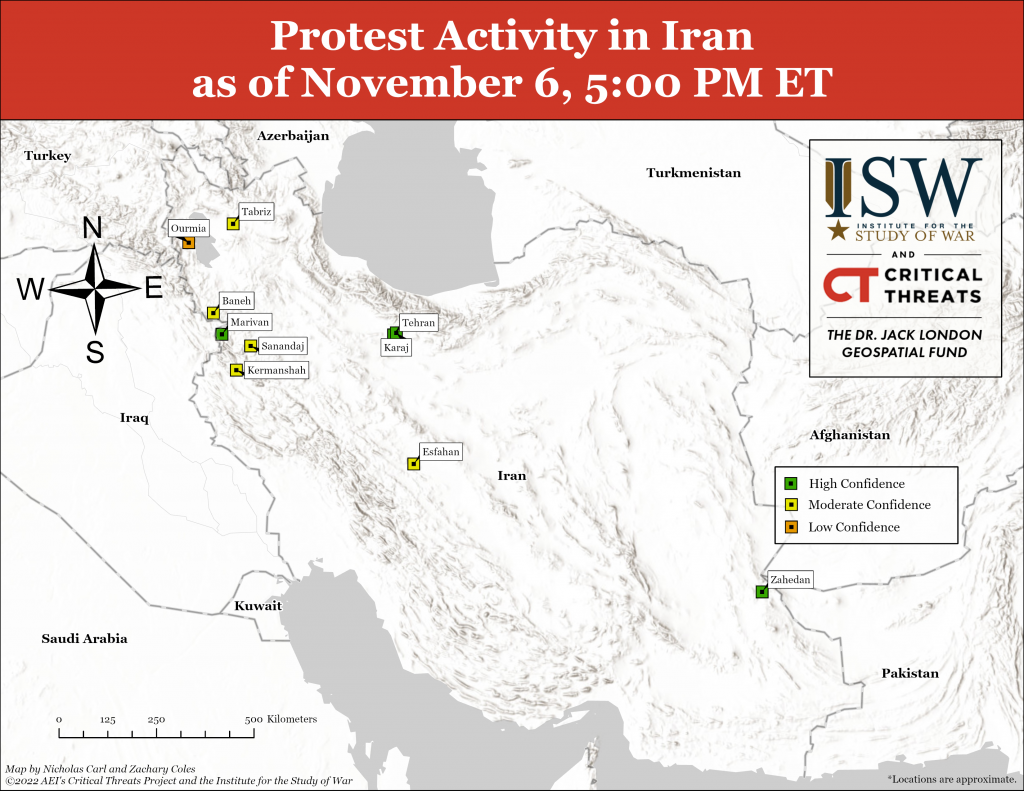 Social media accounts tweeted a video of an individual claiming to have found the identification card of a member of the Fatemiyoun Division during a protest crackdown in Arak, Markazi Province on November 3.[xxviii] The Fatemiyoun Division is an Afghan Shia proxy that the IRGC has used extensively throughout the Syrian civil war to defend despot Bashar al Assad. The video suggests that the regime is using its foreign proxies to suppress demonstrations. Hundreds of protesters gathered in Arak on November 3, as CTP previously reported.[xxix]

The regime may have deployed its proxies for protest suppression, although CTP cannot verify these social media reports. The regime would likely use these proxies to mitigate the bandwidth constraints of the security forces, as CTP previously assessed.[xxx]

Security forces seized weapons shipments in northwestern and southeastern Iran on November 5. The IRGC Ground Forces announced the seizure of ammunition and unspecified weapons in Mahabad, West Azerbaijan Province.[xxxi] LEC Border Guard Commander Ahmad Ali Goudarzi announced the seizure of smuggled pistols in Jakigour, Sistan and Baluchistan Province.[xxxii] Goudarzi noted that this shipment was the third seized in Sistan and Baluchistan Province since the protests began. These areas in northwestern and southeastern Iran are well-known arms trafficking routes where weapons seizures are common.

At least two unidentified gunmen attacked an IRGC facility in Mahshahr, Khuzestan Province on November 6.[xxxiii] CTP has not previously reported anti-regime militancy or protest activity during the current protest wave. The IRGC conducted a brutal crackdown in Mahshahr during the gasoline protests in November 2019.[xxxiv] The IRGC deployed military snipers and armored vehicles with machine guns and killed approximately 148 demonstrators, including some who retreated into a nearby marsh. Axis of Resistance and Regional Developments