The protest movement that began with the Iranian regime killing of Mahsa Amini has likely culminated for the most part. Protest activity has gradually decreased since December 2022, and protester organizers again failed to generate turnout on January 20 despite their heavily circulated calls for countrywide demonstrations. American military doctrine defines culmination as the “point at which a force no longer has the capability to continue its form of operations, offensive or defensive,” and “when a force cannot continue the attack and must assume a defensive posture or execute an operational pause.”[i] CTP analogizes that definition to the protest movement, using the term “culminated” rather than “ended” to reflect its assessment that conditions for a strong and vibrant anti-regime movement remain and that protests or other forms of anti-regime activity will likely resume at some point within the coming months.

Some components of the protest movement still retain their momentum. The protest movement has always consisted of a wide range of demographics and socio-economic strata, each of which has played a unique role in this wave of demonstrations and strikes. One such group consists of the Sunni communities in Golestan Province and Sistan and Baluchistan Province that continue to demonstrate every Friday. Demonstrators continue to gather in large numbers in Zahedan in particular.[ii]

Mass protests could resume rapidly in the weeks and months ahead. Several factors, such as increasingly inclement weather and protester exhaustion, have likely caused this movement to culminate. These factors are temporary and will subside with time. The regime’s brutality did not outright quell the movement but has rather entrenched popular frustrations toward the regime throughout Iran, especially among the youth, as well as generating a wide array of new and deep grievances. CTP has reportedly extensively on how the state security services have killed and injured protesters and abused and tortured those it has arrested.[iii] These victims include children. Iranian authorities have thus alienated significant portions of their population, which will likely harbor anger and resentment toward the regime for years, if not decades.

The protest movement has likely altered the trajectory of Iran’s political and internal security permanently even if most of the movement has indeed culminated. Every major protest wave in the history of the Islamic Republic has had such an effect to some extent. Iran has never simply returned to its previous state after each wave. This movement especially has generated a long-lasting impact that makes returning to the status quo of pre-September 2022 Iran extraordinarily unlikely. Protest coordinators have used this movement to cohere and organize the anti-regime movement in Iran and have begun establishing the networks and infrastructure to stage a protracted struggle against the regime. CTP has previously argued that some components of this movement have reached the threshold necessary to be considered a latent and incipient insurgency, which will likely continue its efforts to undermine the regime.[iv]

It is especially noteworthy that most of the movement has culminated with protest organizations still in place and active online, even if they are for the moment unable to generate protest turnout. The regime has clearly failed to disrupt, infiltrate, or take down a number of prominent anti-regime organizers. The regime has also failed to gain control of cyberspace despite decades of effort or to prevent online groups from reaching the Iranian people.

Neither did the regime make any real concessions to address core protester grievances. It has doubled down on hijab laws and instituted a technology-powered surveillance system of enforcement as well as requirements on private institutions to enforce its oppression of Iranian women and girls.[v] It has not only failed to address economic grievances but in fact has brought the country to a significantly worse economic state than it was in when the movement began.

All the conditions remain present for the resumption of significant anti-regime activity, possibly including the renewal of major protest activity, at any time, particularly if the regime provides a spark in the form of some other heinous act such as the killing of Mahsa Amini.

CTP assesses with low confidence that protests took place in the following locations: 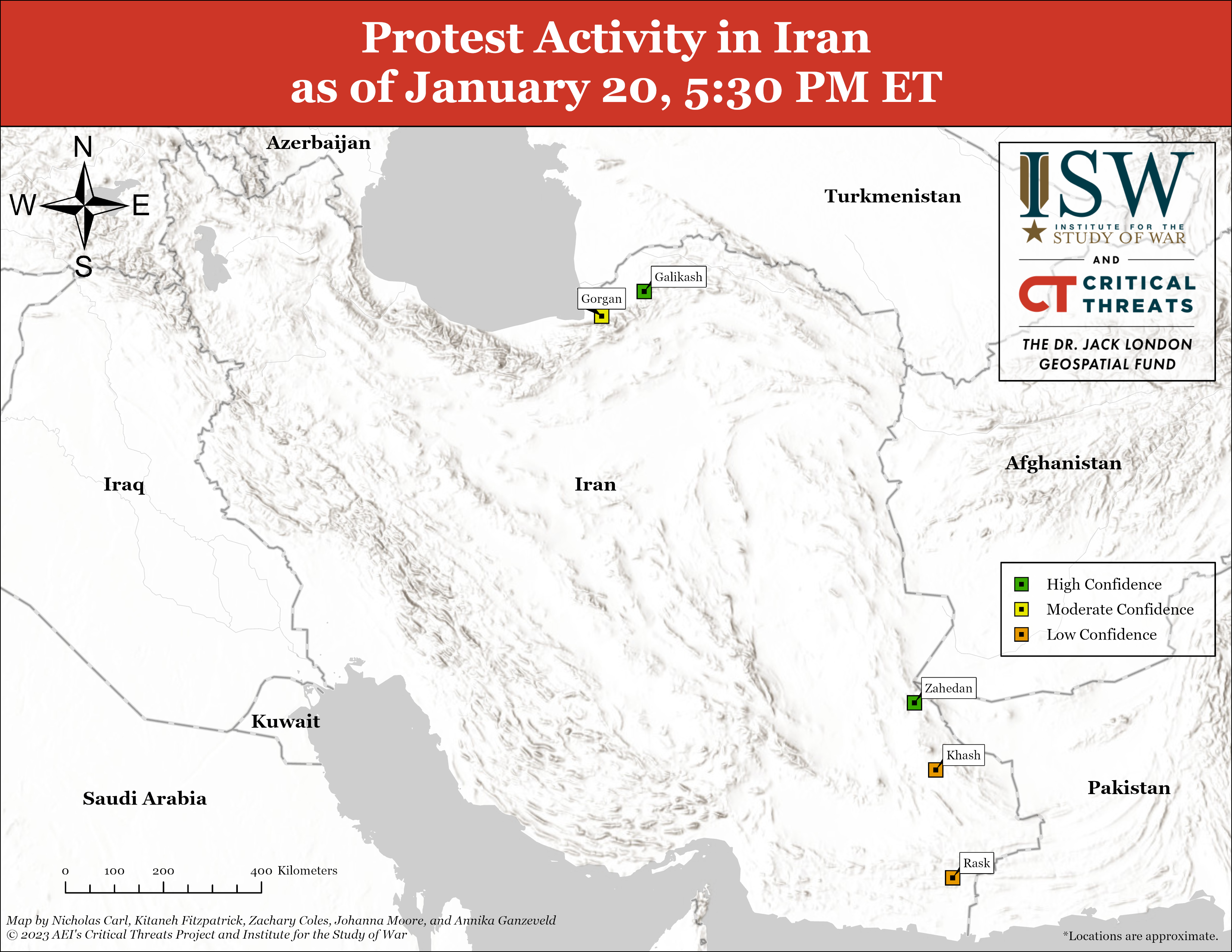 Prominent Sunni clerics Moulana Abdol Hamid and Mohammad Hossein Gargij criticized the regime in public speeches on January 20. Abdol Hamid stated that “eighty- and ninety-year-olds" are incapable of making decisions for Iranian youth during his Friday sermon in Zahedan, Sistan and Baluchistan Province.[xi] Gargij stated that a government that ignores its people does not deserve to rule.[xii] Gargij spoke to a gathering of protesters outside his home in Galikash, Golestan Province. These protesters were expressing support for Gargij, who the regime has barred from organizing prayers and placed under house arrest.[xiii] Gargij has continued to give Friday sermons during this period despite the regime efforts to silence him.[xiv] Abdol Hamid’s and Gargij’s continued criticisms thus reflect how regime efforts to suppress these criticisms from prominent Sunni clerics have backfired and generated greater unrest against the political establishment.

Anti-regime Black Reward hacker group defaced and hacked the website of Imam Sadegh University on January 20.[xv] The group posted an image of a woman holding a burning hijab on the front page. The group also claimed that it will soon share files that it retrieved from the university website. Black Reward has previously hacked the Atomic Energy Organization of Iran and IRGC-affiliated Fars News Agency and published internal documents from both.[xvi]

Likely Iranian-backed militants conducted a kamikaze drone attack on the Al-Tanf base, which houses US troops, in southeastern Syria on January 20.[xvii] US-led Coalition Forces shot down two drones, and one struck the base, injuring two Syrian personnel. Iranian-backed militants have increasingly attacked al Tanf in recent years, including from Iraq. Likely Kataib Hezbollah militants conducted a drone attack on Al-Tanf base from Jurf al Sakhar, Babil Province, Iraq on August 15, 2022.[xviii]