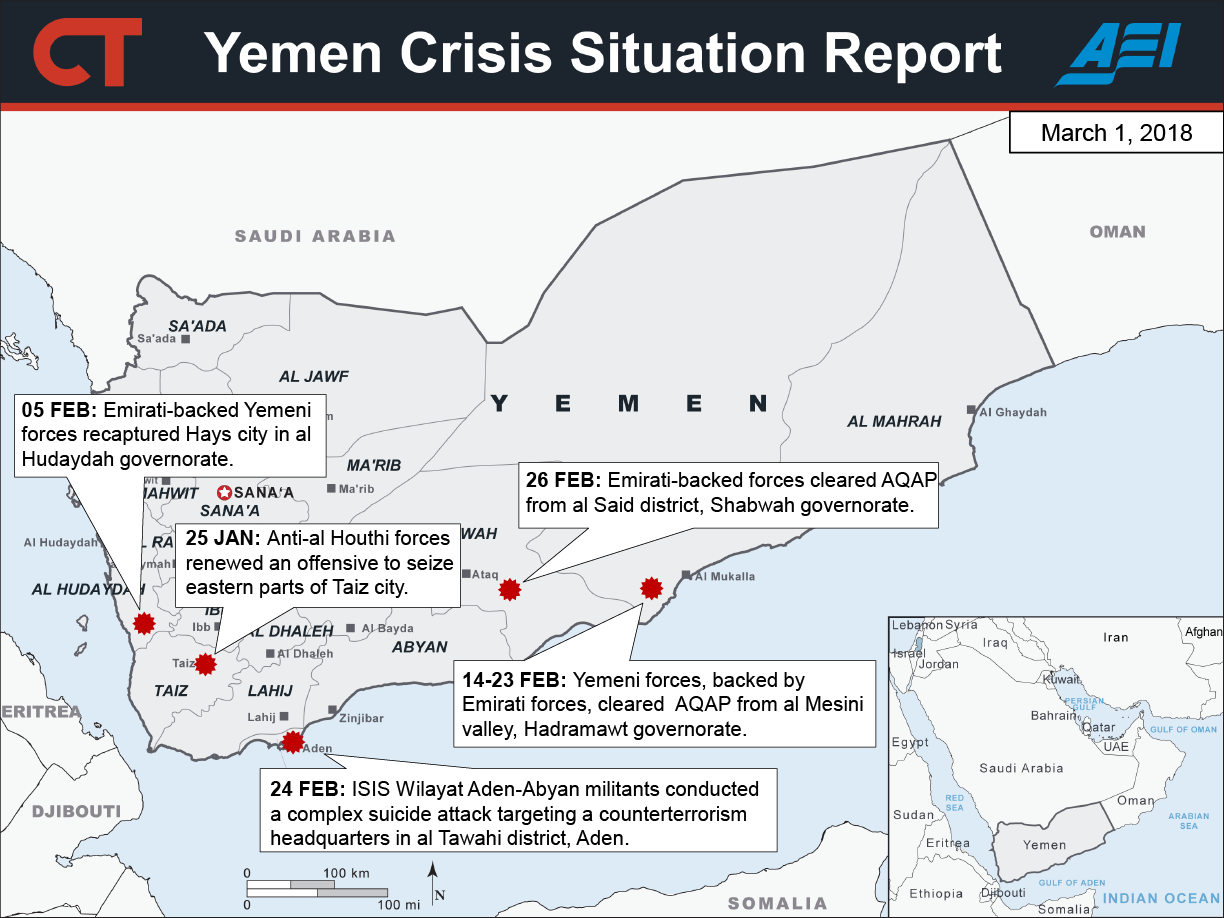 Russia pushed through a UN Security Council resolution draft on Yemen that did not mention Iran's provision of asymmetrical capabilities to the al Houthi movement, effectively blocking a U.S.-led effort to hold Iran accountable for its role in Yemen. Russian and Iranian interests largely converge in the Middle East, which includes the shared interests of reducing American influence in the region.

The United States will not be able to bring additional pressure against Iran through UN channels. The U.S. led a campaign in the UN beginning in mid-December 2017 to hold Iran accountable for violating UN Security Council Resolution 2231, the resolution supporting the Iranian nuclear deal, and UNSCR 2216, which established an arms embargo against sanctioned Yemeni actors in April 2015. The U.S. contends Iran has provided Yemen’s al Houthi movement with ballistic missiles and other materiel. The U.S. effort occurred as American officials also pressured Saudi Arabia to open the blockade of Yemen and pursue a political resolution to the Yemeni war. Russia vetoed a UK-drafted resolution in the Security Council that condemned Iran for violating the arms embargo and called for additional measures against Iran to address the violations on February 26. The Security Council passed a Russian draft resolution (Resolution 2402) preserving the current Yemen sanctions that excluded language on Iran. U.S. Ambassador to the UN Nikki Haley announced the U.S. would take action against Iran outside the UN. The U.S. released a joint statement with the UK, France, and Germany condemning Iran.

The arrival of a new UN Special Envoy for Yemen has sparked renewed diplomatic engagements for Yemeni actors as they maneuver ahead of predicted peace talks. It is not clear that the two sides will be able to reach a mediated settlement, however. The outgoing special envoy Ismail Ould Cheikh Ahmed announced on February 9 that his successor will facilitate new talks in Muscat, Oman and briefed on February 27 that the previous round collapsed because “the Houthis were not prepared to make concessions on the proposed security arrangements.”

The Islamic State of Iraq and al Sham (ISIS) Wilayat Aden-Abyan seems to be launching a campaign of complex attacks against Yemeni government sites in Aden that mirrors an AQAP signature tactic. Wilayat Aden-Abyan detonated twin suicide vehicle-borne improvised explosive devices (SVBIEDs) outside of a counterterrorism headquarters in Aden city before militants attacked the base with small arms. This attack was almost certainly perpetrated by the same cell responsible for resuming explosive suicide attacks in Aden in November 2017 after a nearly year-long gap in attacks. ISIS is likely building the VBIEDs either in Aden or neighboring Lahij, where ISIS previously maintained a VBIED factory. One of the militants responsible for the attack also participated in the Yemeni Army 22nd Mechanized Brigade in Taiz city, according to a local news source. (ISIS statements translated by SITE.)

Delivery of humanitarian and commercial goods in Yemen remains delayed, further exacerbating the humanitarian situation. The Saudi-led coalition Yemen Comprehensive Humanitarian Operations (YCHO) is hindering humanitarian efforts by diverting cargo away from al Houthi ports, according to the UN. The coalition designed YCHO to enable the coalition to shape the delivery of aid for its own benefit. The humanitarian situation remains “catastrophic” despite an increase in international and coalition funding for aid relief.  The rate of cholera cases and associated deaths are declining, but this trend will likely reverse during Yemen’s rainy season in April. The number of internally displaced persons (IDPs) increased due to an escalation in the civil war since December 2017. This increase will likely strain humanitarian services and accelerate the spread of disease.

The Saudi-led coalition may perceive Russia’s veto in the UNSC as an indicator that the international community is not capable of diplomatically pushing back on Iran’s actions in Yemen. The coalition will likely continue to pursue a military solution to the conflict as a result. The coalition’s efforts to end the war militarily have been unsuccessful and will likely continue to fail, perpetuating conditions that allow groups like AQAP to flourish.