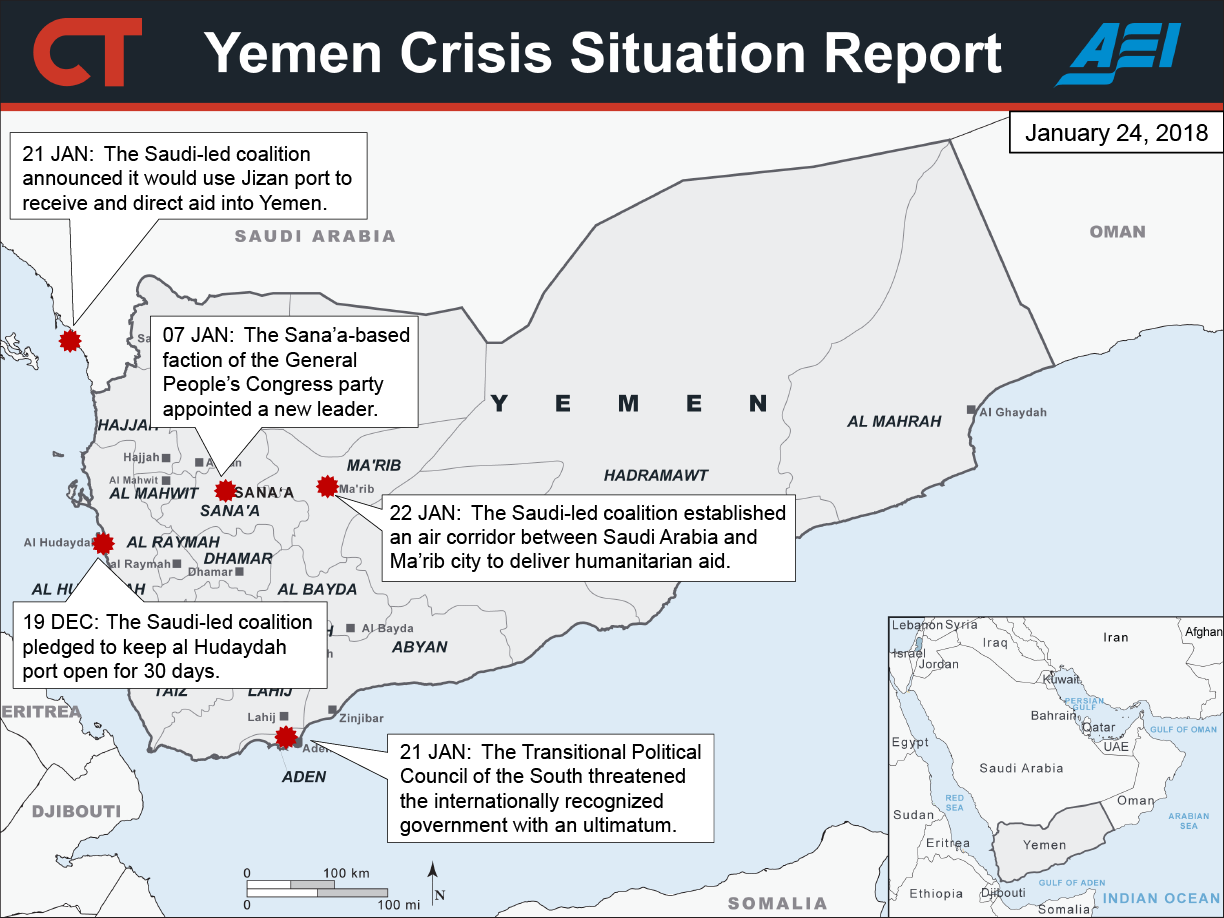 The Yemeni state is fractured. A political resolution that excludes key stakeholders, such as southern opposition members, will not hold, though the upcoming change in the UN Special Envoy for Yemen presents an opportunity to renew diplomatic negotiations.

The Yemeni state is fractured. A political resolution that excludes key stakeholders, such as southern opposition members, will not hold, though the upcoming change in the UN Special Envoy for Yemen presents an opportunity to renew diplomatic negotiations.

The Transitional Political Council of the South (STC) issued an ultimatum threatening to topple the internationally recognized Yemeni government in one week unless President Abdu Rabbu Mansour Hadi dismisses his cabinet. The STC cited the failure of Hadi’s government to deliver basic services, especially in Aden, as cause and also announced the formal constitution of the Southern Resistance Forces as the security force for South Yemen. The announcement challenges the authority of Hadi’s government and exposes the fragmentation that has occurred in Yemen over the course of the civil war. The Critical Threats Project warned in May 2017 that the STC’s establishment risked fragmenting Hadi’s fragile coalition. The STC has maintained its commitment to the Saudi-led coalition’s military efforts to defeat the al Houthi movement, however, and still recognizes the legitimacy of the internationally recognized Yemeni government, leaving open the possibility of a peaceful resolution.

Russia seeks to contest U.S. influence by restoring its Soviet-era relationship with the Aden-based Yemeni government. The Russian Foreign Ministry announced its intentions to resume investment projects in Yemen upon the formation of a single governing body ahead of a visit by Yemeni Foreign Minister Abdul Malik al Mikhlafi to Moscow. Russian Foreign Minister Sergey Lavrov stated that the Yemeni crisis has worsened due to the “domestic conflict in [Yemen] with the involvement of the Arab coalition” during his meeting with Mikhlafi. Lavrov’s comments may indicate Russian posturing to sell itself as an unbiased mediator to negotiate a political resolution to the civil war. Russia may pull from its playbook in Syria to co-opt the political negotiation process in Yemen and rebuild Russia’s influence in the Gulf of Aden region.

A new humanitarian initiative spearheaded by Saudi Arabia will further politicize the delivery of humanitarian assistance in Yemen. Saudi Arabia announced the Yemen Comprehensive Humanitarian Operation initiative, which shifts the delivery route for humanitarian assistance in Yemen from al Hudaydah port to a route that runs through Jizan port and by air to Ma’rib. Saudi Arabia has also pledged $1.5 billion in assistance to the UN’s 2018 Humanitarian Response Plan for Yemen as part of this initiative. The move could be intended to preempt future international criticism should the coalition re-establish the blockade on the al Houthi-held al Hudaydah port, through which 80 percent of all imported goods run. Shifting the aid distribution hub to Ma’rib also seeks to use the assistance as leverage to buy local support. The Saudi-led coalition pledged to keep al Hudaydah open for thirty days on December 19.

The appointment of a new UN Special Envoy for Yemen may be insufficient to resume serious peace talks, but may restore legitimacy to the office among key stakeholders. UN Special Envoy to Yemen Ismail Ould Cheikh Ahmed will step down from office when his appointment expires at the end of February after holding his position for three years. Ahmed was unable to make significant progress during his tenure, handicapped by requirements in UNSCR 2216 that the al Houthis refused to accept. The al Houthi government in Sana’a declared him persona non grata in June 2017 and has demanded political negotiations outside of the UN process. Diplomats report that UN Secretary-General Antonio Guterres seeks to appoint British mediator Martin Griffiths to the position. The change in personnel is an opportunity to renew political negotiations, which will pass should international stakeholders not also invest in supporting the diplomatic process.

The fragmentation of late former Yemeni president Ali Abdullah Saleh’s political party weakens the effect of splitting the General People’s Congress (GPC) party from the al Houthi movement. A key assumption behind the effort to split Saleh from the al Houthi movement was that he would lead his united patronage network against the al Houthis. Three GPC factions emerged following Saleh’s death. The first faction remained as part of the Sana’a-based al Houthi alliance. The second faction is organizing with the support of Saudi Arabia. Yemeni President Abdu Rabbu Mansour Hadi, who was Saleh’s vice president for almost two decades, is a candidate to lead this faction. Hadi faces a legitimacy crisis, however, and GPC members have dismissed the idea of Hadi leading the GPC. The third faction, backed by the UAE, is coalescing around Saleh’s son, Ahmed Ali, and nephew, Tariq. Ahmed Ali disowned the al Houthi movement after al Houthi forces killed Saleh. Tariq returned to the public scene this month flanked by Emirati forces in Shabwah, calling on the Saudi-led coalition to stop the war.

U.S. and Emirati counterterrorism measures have disrupted AQAP’s ability to operate. Al Qaeda in the Arabian Peninsula (AQAP) adapted to U.S. counterterrorism pressure by ordering its members to follow strict operations security measures. AQAP banned the use of cell phones and online communication applications. AQAP included the new directives in a video that blamed the recent deaths of hundreds of its militants on technology and moles. U.S. Central Command reported in December that the U.S. had conducted more than 120 airstrikes against Salafi-jihadi cells in Yemen. The ongoing campaign killed several key AQAP leaders and temporarily derailed AQAP’s media output.  A Saudi-led coalition offensive in central Yemen may present AQAP with an opportunity to legitimize itself within the local population, though there are reports that AQAP has lost favor among the tribes. (AQAP statements obtained through Telegram or translated by SITE.)

The coalition supporting the internationally recognized Yemeni government will continue to splinter as stakeholders seek to secure their interests in the current environment. Political negotiations must also include these groups in order to secure necessary buy-in to the future Yemeni state.