The Yemen File is a biweekly analysis and assessment of the Yemen conflict and the Salafi-jihadi movement in Yemen.

Violence in central Yemen has escalated following an al Houthi–movement advance into al Bayda governorate over the summer. Al Bayda had an underlying tribal conflict before the current civil war, which has added a layer of complexity to its local dynamics. Salafi-jihadi groups, namely the Islamic State in Yemen and al Qaeda in the Arabian Peninsula (AQAP), have generally sided against the al Houthi movement while maintaining havens in al Bayda. Al Houthi forces’ recent efforts to move through al Bayda toward neighboring Ma’rib governorate, the internationally recognized Yemeni government’s last stronghold in northern Yemen, have fueled existing tensions between al Houthi militants and Salafi-jihadi groups since August. (See more on the al Houthi campaign in the following section.

AQAP retains low-level operational capacity in al Bayda. AQAP fighters are clashing with al Houthi militants in the governorate in a conflict that overlays local tribal dynamics. AQAP increased its counterespionage activities in al Bayda in August. The group *executed several nonmembers *accused of spying for the al Houthi movement.[3] AQAP’s executions may be *targeting specific tribes it suspects of being linked to the al Houthis.

AQAP has also increased its media output and resumed claiming attacks after a five-month lull, possibly indicating the group is reconstituting its operational and logistical capabilities.[4] A US air strike killed a key AQAP media operative in May, disrupting the organization’s media production until late June.[5] AQAP has increased its media production since late August and resumed claiming attacks in mid-September. The attacks have all targeted the al Houthi movement, possibly in response to the al Houthis’ August ground offensive in Qayfa, where AQAP is active.[6] AQAP may attempt to frame itself as a “protector” to certain tribes that the al Houthi movement *has targeted with *indiscriminate shelling and kidnappings to *prevent them from collaborating with anti–al Houthi forces. If AQAP attempts to do so, it could gain local support.

Forecast: The Islamic State in Yemen’s continued weakening will drive recruits toward AQAP, contributing to AQAP’s gradual strengthening as it exploits Yemen’s conflict. AQAP will deepen its alignment with select tribes in al Bayda governorate by participating in local conflicts and the fight against the al Houthi movement. Alternatively, AQAP runs the risk of causing local backlash by taking an overly harsh stance toward accused spies from local communities.

Al Houthi reinforcements *have been arriving from neighboring Dhamar governorate to Qaniya in northern al Bayda *at least since July to join the Ma’rib operation. Clashes involving al Houthi forces *moved northward from Qaniya in late August toward *Mahliyah and *Rahabah districts in southern Ma’rib throughout September. Military escalation in Ma’rib, which hosts approximately 750,000 displaced Yemenis, would exacerbate an already dire humanitarian situation. 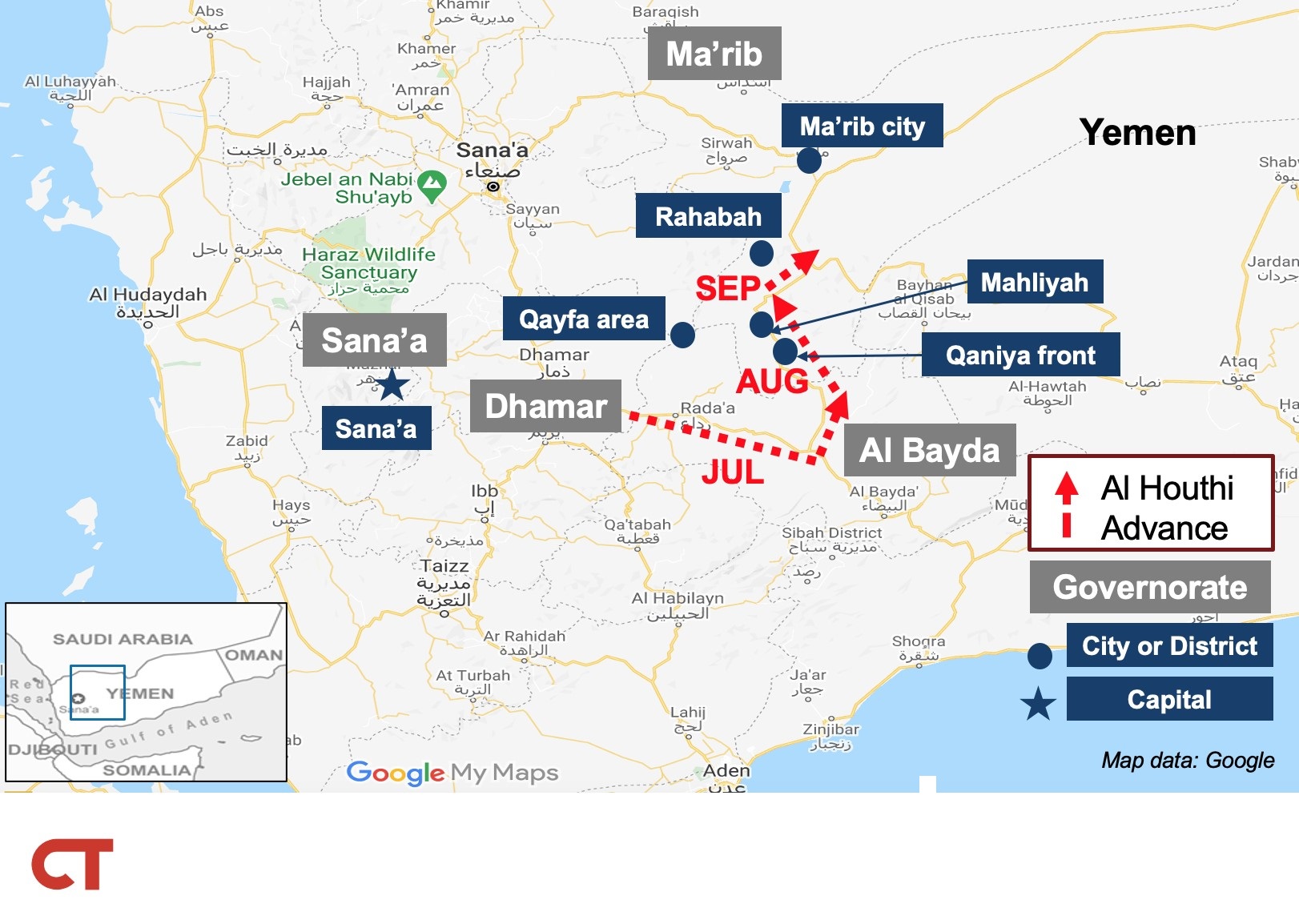 The al Houthi movement’s leader, Abdul Malik al Houthi, condemned Bahrain and the United Arab Emirates (UAE) for normalizing diplomatic relations with Israel. Abdul Malik al Houthi stated that Israel has begun preparing a presence in Yemen *during a televised speech in mid-September. The al Houthi leader accused Saudi Arabia, the UAE, and Bahrain of being part of the “American and Israeli agenda.”

The UAE’s normalization of relations with Israel may also have led an Iranian official to openly acknowledge that Iran has provided the al Houthi movement with technical expertise on weapons building. Iran’s Armed Forces General Staff spokesperson *remarked in late August that Iran has transferred technical expertise to the al Houthi movement. Iran is under increasing pressure from the solidifying alliance between its Gulf Arab rivals and Israel and has signaled a growing willingness to threaten Gulf interests in the Persian Gulf. Iran may be signaling the threat it could pose to the UAE by enabling al Houthi drone and ballistic missile attacks on the country. The al Houthi movement has claimed to have conducted such attacks on the UAE. Senior Iranian military officials used to refer to the UAE as a “deterred” country but have recently shifted their rhetoric to framing the UAE as a country that poses a national security threat.

[1] “IS Embarks On New Stage of Jihad in Yemen After Defeat, Attributes Loss to Enemies On All Sides,” SITE Intelligence Group, August 31, 2020, available by subscription at www.siteintelgroup.com.