The growing Iranian threat around the Strait of Hormuz

Iran is preparing to strengthen its strategic leverage over the Strait of Hormuz amid rising tensions around the Persian Gulf. The Islamic Republic is laying the groundwork for greater Iranian influence around the strait, a vital choke point for global energy markets, by expanding its military footprint and building key infrastructure in the area. Tehran’s efforts reflect contingency planning for a larger potential conflict with the US and its Gulf partners since tensions have spiked in recent months. The regime will intensify its buildup of conventional military capabilities around the strait in the coming months and years as the UN arms embargo on Iran expires in October.

The Iranian regime has historically used the Strait of Hormuz, over which it claims a degree of sovereignty, to pressure its regional and international rivals, including the United States. Iranian forces have harassed and provoked American and British naval vessels there for years, threatened to close the strait to maritime traffic, and attacked international shipping as part of the Iranian response to the US “maximum pressure” campaign.

Iran’s regular military, called the “Artesh,” and the Islamic Revolutionary Guards Corps (IRGC) are adapting their force posture, structure, and capabilities for a larger potential escalation. The Artesh maintains Iran’s conventional “blue-water navy,” which operates primarily around the Caspian Sea and Indian Ocean. The IRGC is contrastingly responsible for the Persian Gulf and uses an asymmetric naval doctrine. The two navies share responsibility for the Strait of Hormuz.

The Artesh and IRGC both announced plans to expand their basing east of the strait before March 2021 (the end of the Persian calendar and fiscal years). Artesh Navy Commander Hossein Khanzadi *restructured two southern naval headquarters in August and outlined his plans to develop the force in the coming months. The two headquarters were the Artesh’s 1st Naval District, which is based at Bandar-e Abbas and responsible for the Strait of Hormuz, and the southern forward naval headquarters, which coordinates across all southern Artesh naval districts. Khanzadi also explained plans to “rapidly develop” the naval districts at Bandar-e Jask and Chahbahar and concentrate the Artesh’s “largest naval fleet” at Chahbahar.

IRGC Navy Commander Alireza Tangsiri similarly *described plans to establish a permanent base along the Indian Ocean before March 2021. Tangsiri has not provided further details in his public statements, but the IRGC *maintains a limited forward naval presence at Bandar-e Jask and Chahbahar. He may plan to expand the Guards’ existing presence at either location or both.

Tehran has also streamlined command and control over its air defense assets around the strait. The regime *established the Persian Gulf Air Defense Operations Command Center in October 2019. The new center is under the Khatam ol Anbia Air Defense Base, which is a national-level headquarters responsible for overseeing and coordinating among Artesh and IRGC air defense units. The headquarters is centralized during peacetime but can transfer decision-making authority to regional operational centers—such as the new Persian Gulf headquarters—during conflict or crisis. 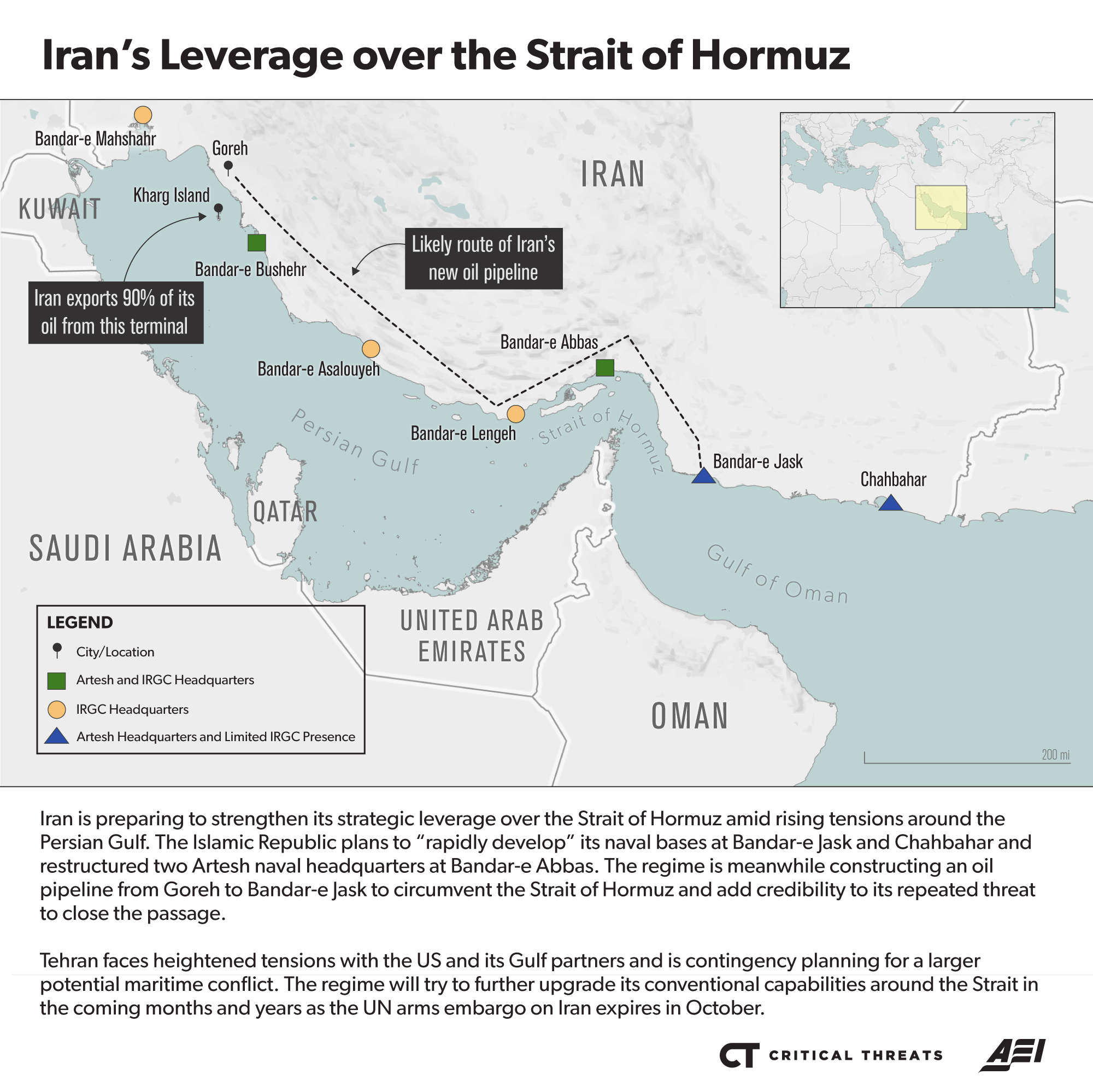 The Artesh and IRGC are also developing their military capabilities around the Strait of Hormuz. The Artesh is prioritizing improving its cruise-missile technologies, which are a key component of Iran’s anti-access/area denial strategy to threaten adversaries and commercial traffic around the Persian Gulf and Sea of Oman. Khanzadi appointed a new missile unit commander when restructuring the Artesh Navy and described plans to acquire Iran’s newly developed Abu Mehdi naval cruise missile. The Defense and Armed Forces Logistics Ministry unveiled the missile on August 20, which has a reported range of 1,000 kilometers (km), includes an active-radar seeker head, and can be launched from mobile shore and inland batteries. The Artesh Navy also conducted a new exercise in June to test fire long- and short-ranged cruise missiles at naval targets from land-based launchpads and ships.

The IRGC has meanwhile added to its naval arsenal and showcased growing capabilities. The IRGC Navy *received 112 new patrol and missile attack craft from the Defense and Armed Forces Logistics Ministry in May. The IRGC also displayed new tactics during its annual Great Prophet military exercise in the Persian Gulf in July. The exercise included practicing targeting an American terminal high altitude area defense system, launching missiles from camouflaged underground platforms, using a recently launched military satellite to collect imagery on US bases around the Gulf, and using fighter jets to bomb naval targets.

The regime is lastly building energy infrastructure around the Strait of Hormuz to add credibility to its repeated threat to close the passage. President Hassan Rouhani *announced in June plans to construct a 1,000 km oil pipeline from Bushehr province to Bandar-e Jask by March 2021. He boasted the pipeline would allow Iran to export oil even if the strait “was closed.” The pipeline would theoretically allow the regime to circumvent the strait and export oil from Bandar-e Jask, in principle ensuring international buyers’ access to at least some Iranian oil during a potential maritime conflict. Iran currently exports around 90 percent of its oil from Bushehr province via the strait.

The Iranian preparations around the Strait of Hormuz come amid heightened tensions between Iran and the Gulf States. Tehran claims that Saudi Arabia and the UAE are escalating on multiple fronts (economic, nuclear, political, and military) against Iran and considers this perceived aggression in the context of the US maximum pressure campaign. Rhetoric from senior Iranian officials highlights the threat the regime perceives and its shifting calculus. Iran is increasingly likely to escalate against US and partner interests around the Persian Gulf and Sea of Oman as pressures mount.

The regime is threatened by growing Saudi economic engagement in Iraq, which could reduce Baghdad’s reliance on Iranian electricity imports. Riyadh has cultivated positive relations with the new Iraqi government since Mustafa al Kadhimi became prime minister in May and seeks to invest in Iraq’s energy sector. The Islamic Republic is a key energy provider to Iraq and wants to deter economic competition there with the kingdom.

Saudi Arabia and the UAE have also significantly progressed their nuclear programs. Riyadh is cooperating with China to advance the Saudi program, and the Emiratis opened the Arabian Peninsula’s first nuclear power plant in August. Abu Dhabi has committed to a peaceful program since 2009, but Iran will still likely consider such progress escalatory.

The regime lastly perceives political and military aggression from the Gulf states. Iranian leaders *condemned the UAE’s normalization of ties with Israel and the Gulf Cooperation Council statement supporting extending the UN arms embargo on Iran. The Emiratis’ recent live-fire military drill with the US in the Persian Gulf and efforts to acquire America’s F-35 fighter jet have further stoked Iranian concerns.

Regime officials close to Supreme Leader Ayatollah Ali Khamenei have shifted their rhetoric to reflect these concerns. Khamenei’s adviser for defense industries and armed forces logistics, Hossein Dehghan, *described Iran’s ties with the UAE as improving and more favorable in June. The regime believed it deterred the Emiratis after Iran attacked regional oil assets and infrastructure in mid-2019 as part of the Iranian response to the US maximum pressure campaign. Armed Forces General Staff Chief Mohammad Bagheri later *condemned Abu Dhabi on August 16 after it normalized ties with Israel. Bagheri stated the regime will change its approach to the Emirates and blame it for any national security threat around the Persian Gulf. The change in Iranian rhetoric from June to August may reflect how Khamenei’s inner circle feels a need to reestablish deterrence vis-à-vis the UAE. The regime seized an Emirati tanker the day after Bagheri’s threats on August 17.

The Iranian threat around the Strait of Hormuz could grow further after the UN arms embargo expires in October. The regime seeks to develop its conventional military capabilities, particularly its missiles, naval forces, airpower, and air defense forces, and will try to procure advanced technologies from China and Russia. The Defense Intelligence Agency notes the regime seeks to field “improved naval mines, faster and more lethal surface platforms, more-advanced [anti-ship cruise missiles], larger and more-sophisticated submarines, and new [anti-ship ballistic missiles].” Iran could become emboldened to take increasingly aggressive actions against the US and its allies as it consolidates strength around the Strait of Hormuz and perceives a threat from the Gulf states.

The Iranian conventional buildup considered in this report poses a relatively limited threat to the US if America chooses to commit the resources needed to overcome it. It could pose a much more serious threat, however, to American regional allies such as Saudi Arabia and the UAE on which American regional strategy increasingly relies.