Syria. Deteriorating relationships between the Syrian Democratic Forces (SDF) and local communities will likely advantage the Islamic State in Iraq and al Sham (ISIS) as it seeks to expand its shadow governance in eastern Syria. Tensions have spiked over reported SDF human rights abuses in communities it suspects of harboring ISIS fighters in Deir Ezzor province. ISIS is likely taking advantage of the SDF’s abuse of civilians by retaliating against the SDF to promote itself as an alternative, while also using threats and intimidation to recruit local allies.

Somalia. Al Shabaab, al Qaeda’s affiliate in Somalia, is attempting to push back an effort by Somali government and local forces to oust the group from positions in central Somalia. Somali forces, with US support, have removed al Shabaab from several strongholds in central and south-central Somalia. Al Shabaab is retaliating with attacks intended to pin Somali forces in their positions and intimidate local militias. The group is likely not pursuing negotiations with the Somali government, despite media reports of talks.

Syria. Deteriorating relations between the Syrian Democratic Forces (SDF) and local communities are likely creating opportunities for ISIS to reassert its presence in eastern Syria’s Deir Ezzor province. Arab SDF military officials in Deir Ezzor killed two women over a family dispute in December, spurring widespread unrest in Bakkara tribal territory in Deir Ezzor.[1] This incident is part of a trend of some SDF abuses of power that have included looting and abuse of civilians during counterterrorism raids.[2] ISIS likely enjoys some popular support in areas of Deir Ezzor and could exploit backlash against the SDF to expand its ability to impose governance. ISIS has previously imposed dress codes on women in Deir Ezzor and shut down a local civil council.[3] 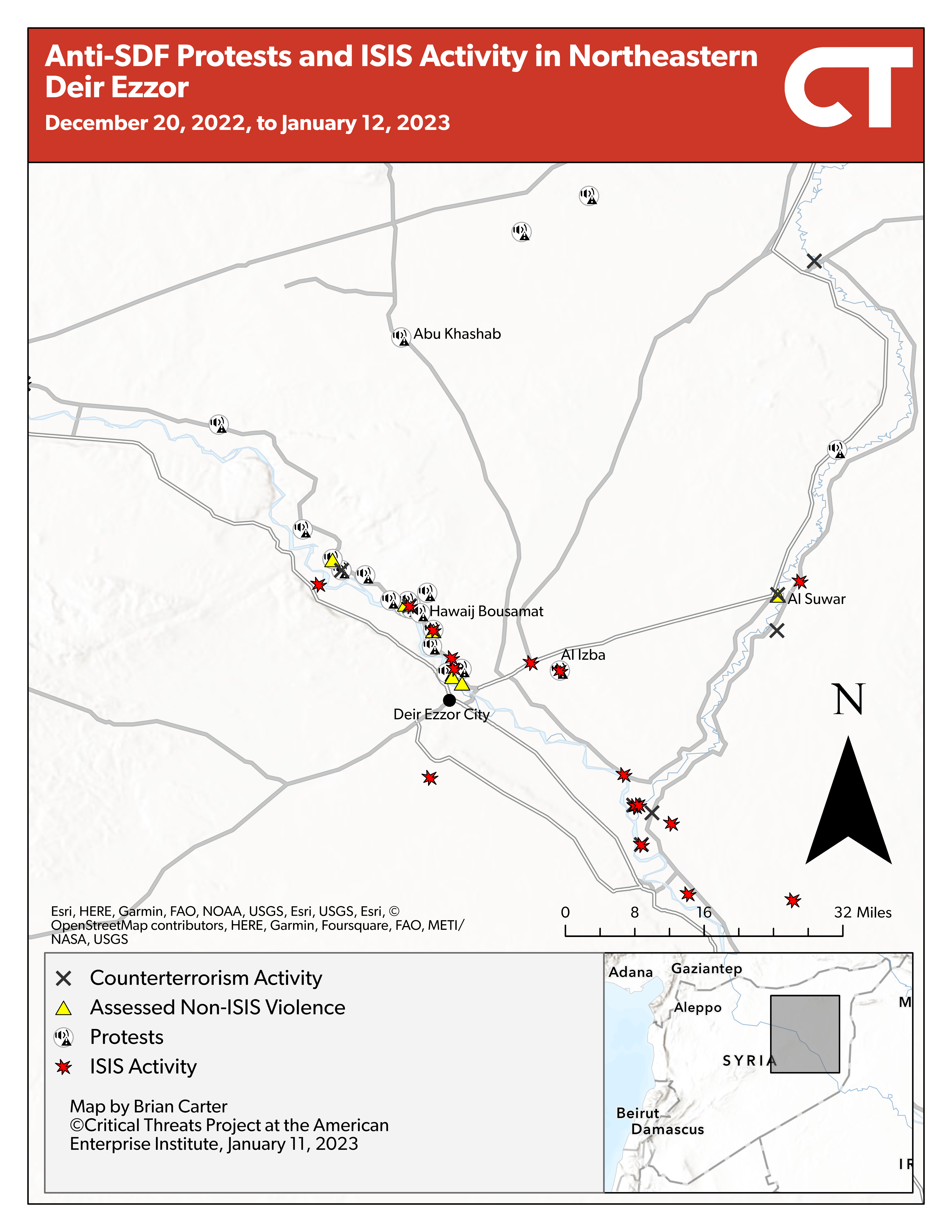 The SDF’s shortcomings contribute to ISIS’s rebuilding efforts. The group is attempting to extend its shadow governance over civilian populations in Deir Ezzor.[4] ISIS combines coercive and persuasive measures to encourage at least tacit civilian support for ISIS on the local level. ISIS may have responded to recent unrest by preventing SDF freedom of movement in Bakkara tribal territory by ambushing SDF forces and assassination SDF officials, thus presenting themselves as protectors of local actors.[5] ISIS simultaneously threatens military and security officials, including coercing them to become informants.[6] 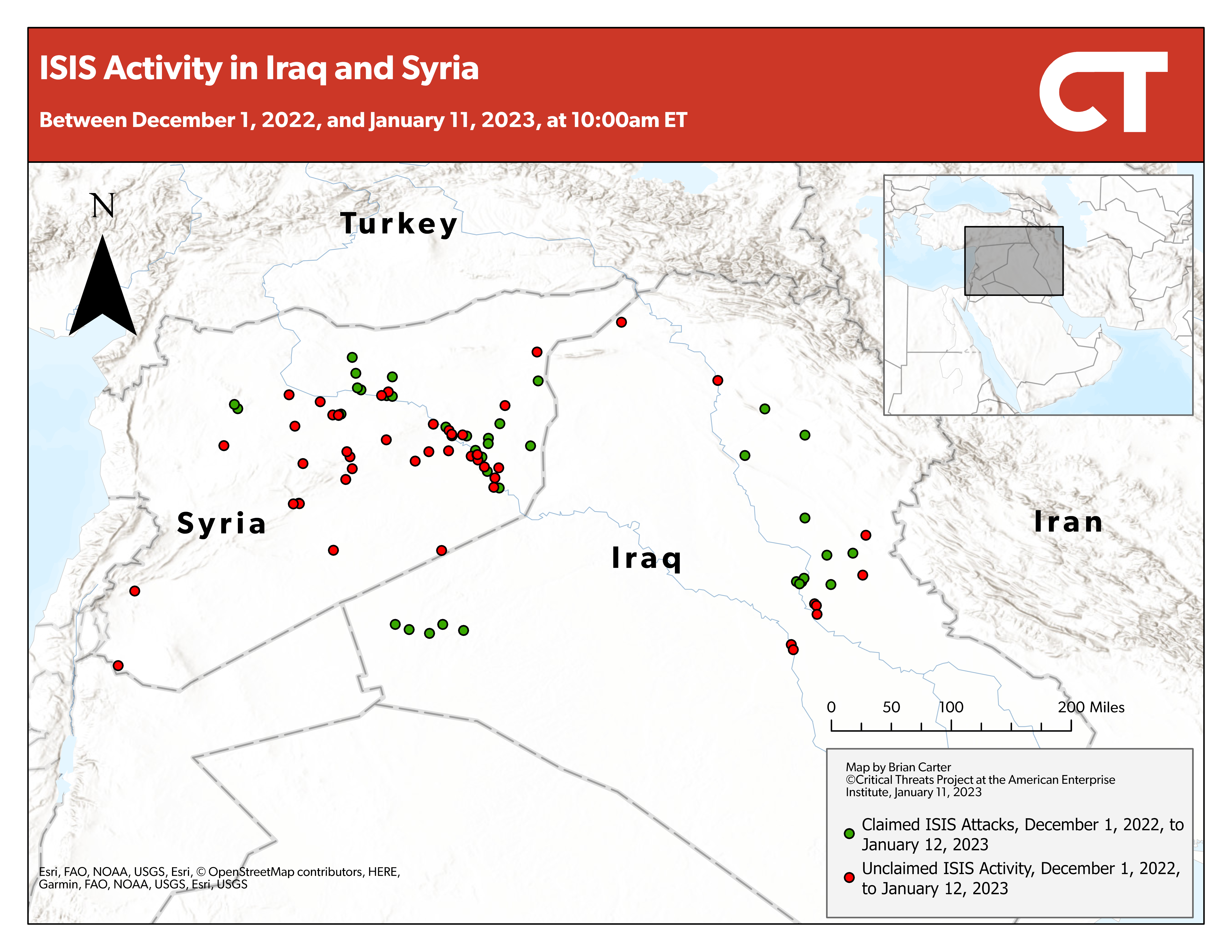 Note: CTP defines “attacks” as kinetic activity, including assassinations, armed assaults on military positions, executions, and bombings. “Activity” includes all forms of ISIS activity, including attacks, force movements, and reports of governance activity like zakat collection. ISIS does not generally report on these non-kinetic activities and does not claim all of its attacks.

Figure 3. The Salafi-Jihadi Movement in the Middle East

Somalia. Al Shabaab has escalated counterattacks in response to an ongoing Somali government-led offensive in central Somalia that began in the summer of 2022. Anti–al Shabaab forces are now contesting more areas in central Somalia than they have since 2015. The Somali government began the offensive in June with the support of local clan militias that rebelled against al Shabaab for assassinating a prominent clan elder.[8] The offensive accelerated and expanded in August and September after al Shabaab retaliatory attacks reinvigorated the Somali government effort and drew more clan militias into the fight.[9] Anti–al Shabaab forces, with US and Turkish drone support, cleared al Shabaab strongholds from the eastern half of central Somalia’s Hiraan region in September and all of the Middle Shabelle region from October to December, and they began pushing into the southern district of the Galgudud region in late December.[10] 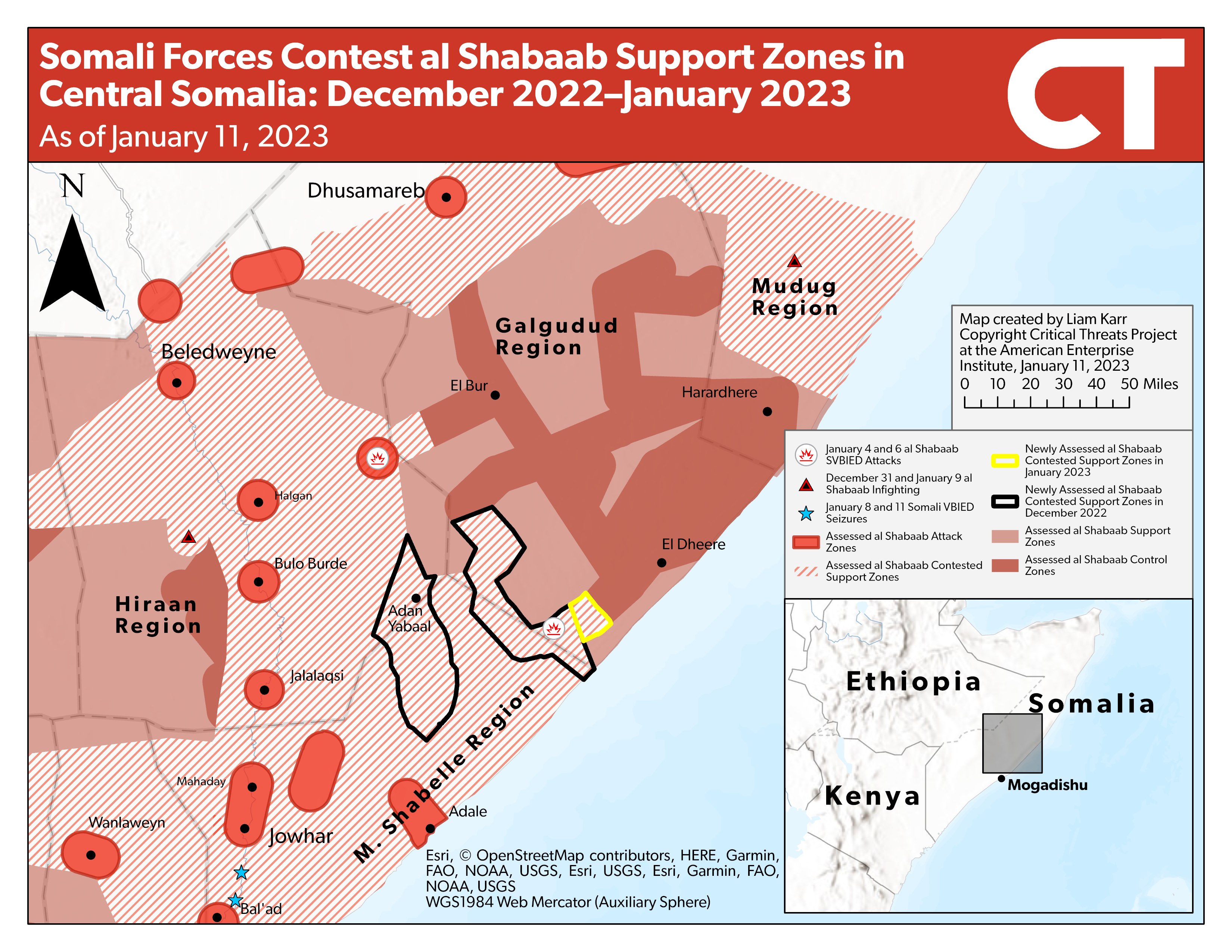 Al Shabaab has supplemented this attack wave by attempting to coerce clan militias to demobilize. Al Shabaab made an agreement on December 23 with a major subclan in northern Galgudud region to keep their clan militia from fighting al Shabaab.[13] The clan elders agreed to forgo cooperation with government forces and disarm in al Shabaab–controlled villages in exchange for the return of 67 prisoners and free commerce.[14] Al Shabaab abducted at least 29 civilians in the Hiraan region between December 30 and January 2 and will likely attempt to use the hostages to coerce clan militia in Hiraan the same way it did in northern Galgudud.[15] Disrupting Somali forces and demobilizing clan militias would prevent further offensives into al Shabaab havens in the Galgudud region and potentially set conditions for al Shabaab to reenter previously lost rural areas of central Somalia. Two al Shabaab factions from rival clans clashed in the Hiraan region over the kidnappings on January 9, indicating the kidnapping campaign may also backfire and inflame clan tensions within al Shabaab.[16]

It is highly unlikely that al Shabaab leadership has reached out to the Somali Federal Government (SFG) for negotiations, despite its losses in central Somalia. The Somali deputy defense minister claimed that al Shabaab approached the SFG for potential talks during a January 7 press conference discussing military operations in central Somalia, leading several media outlets to circulate the claim.[17] The SFG and al Shabaab quickly denied the reports.[18] Al Shabaab has rejected outreach efforts from multiple Somali administrations since 2009 because it views the SFG as an illegitimate “apostate” government.[19]

The central Somalia offensive is more likely causing an increase in unofficial talks with mid- to low-level al Shabaab militants looking to defect. The nature of the offensive is likely compounding the psychological effect of battlefield setbacks among al Shabaab fighters. A March 2022 report from the George Washington University Program on Extremism noted that drone strikes and public uprisings are two key fears among al Shabaab militants. The central Somalia offensive uses both tools.[20] Two al Shabaab factions reportedly clashed in al Shabaab–controlled Mudug region on December 31, killing 12 militants, after one group attempted to defect.[21] An increase in defections would indicate the offensive is causing more widespread unrest among al Shabaab’s ranks.

Figure 5. The Salafi-Jihadi Movement in Africa 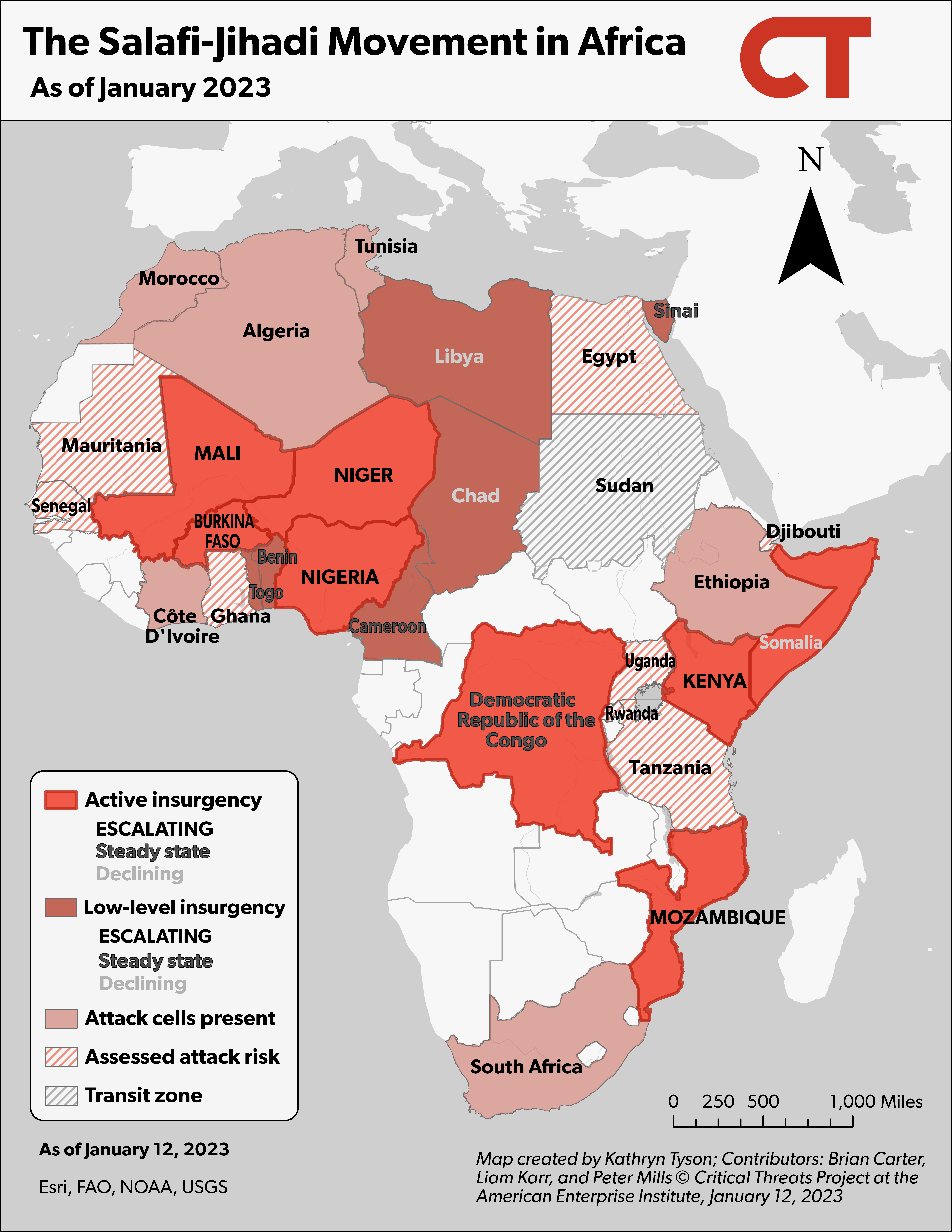 Afghanistan-Pakistan. The TTP has escalated attacks since calling off a cease-fire with Pakistan in November 2022. The cease-fire had begun in June 2022 following negotiations.[22] The cease-fire began to break down after several TTP commanders died under mysterious circumstances in Afghanistan.[23] TTP began claiming “defensive” attacks against Pakistan in September 2022 but did not announce the end of the cease-fire until late November 2022.[24] The group has since escalated attacks across Pakistan.[25] These attacks include attempts to overrun security posts, including a multiday takeover of a detention center in December 2022.[26] The TTP has also increasingly targeted senior intelligence officials and expanded its area of operations since November, including its first attack in Islamabad in over a year.[27]

Pakistan is considering a military campaign against the TTP, which may include cross-border strikes targeting TTP safe havens inside Afghanistan. The TTP uses support bases in Afghanistan to launch attacks into Pakistan. Senior Pakistani officials, including the prime minister and chief of army staff, attended key meetings in late December and early January on responding to the TTP threat, and the interior minister said explicitly that Pakistan had the right to respond in Afghanistan.[28] These statements imply Pakistan is preparing for an extended campaign against the TTP, but it has likely not yet decided how to address TTP safe havens in Afghanistan. The Pakistani Ministry of Foreign Affairs said on December 29 that Pakistan is continuing to engage with the Afghan Taliban to resolve security issues.[29] The Pakistani interior minister said on January 4 that efforts were underway to bring TTP back to negotiations, which the Afghan Taliban would likely help facilitate.[30]

The relationship between the Afghan Taliban government and Pakistan has deteriorated over the past few months due to increasing border clashes and the Taliban government’s failure to reign in TTP attacks targeting Pakistan. Taliban and Pakistani border forces clashed repeatedly in late 2022, typically over Pakistan's construction of checkpoints and fences along the border. The Taliban Ministry of Defense responded to Pakistan’s threats, stating the Taliban would respond militarily against any Pakistani attack inside Afghanistan and deploying hundreds of fighters, including armored vehicles, to the border near Kandahar on January 1.[31] The Taliban government softened its rhetoric a few days later, stating it sought good relations with Pakistan, but it still blamed Pakistan for the tensions. The Taliban government likely does not desire a wider military confrontation with Pakistan, despite hostile rhetoric. Afghanistan’s economy has collapsed and remains unable to recover, rendering it vulnerable to any serious economic disruption that a wider conflict with Pakistan would bring.[32]

Figure 6. The Salafi-Jihadi Movement in Central and South Asia 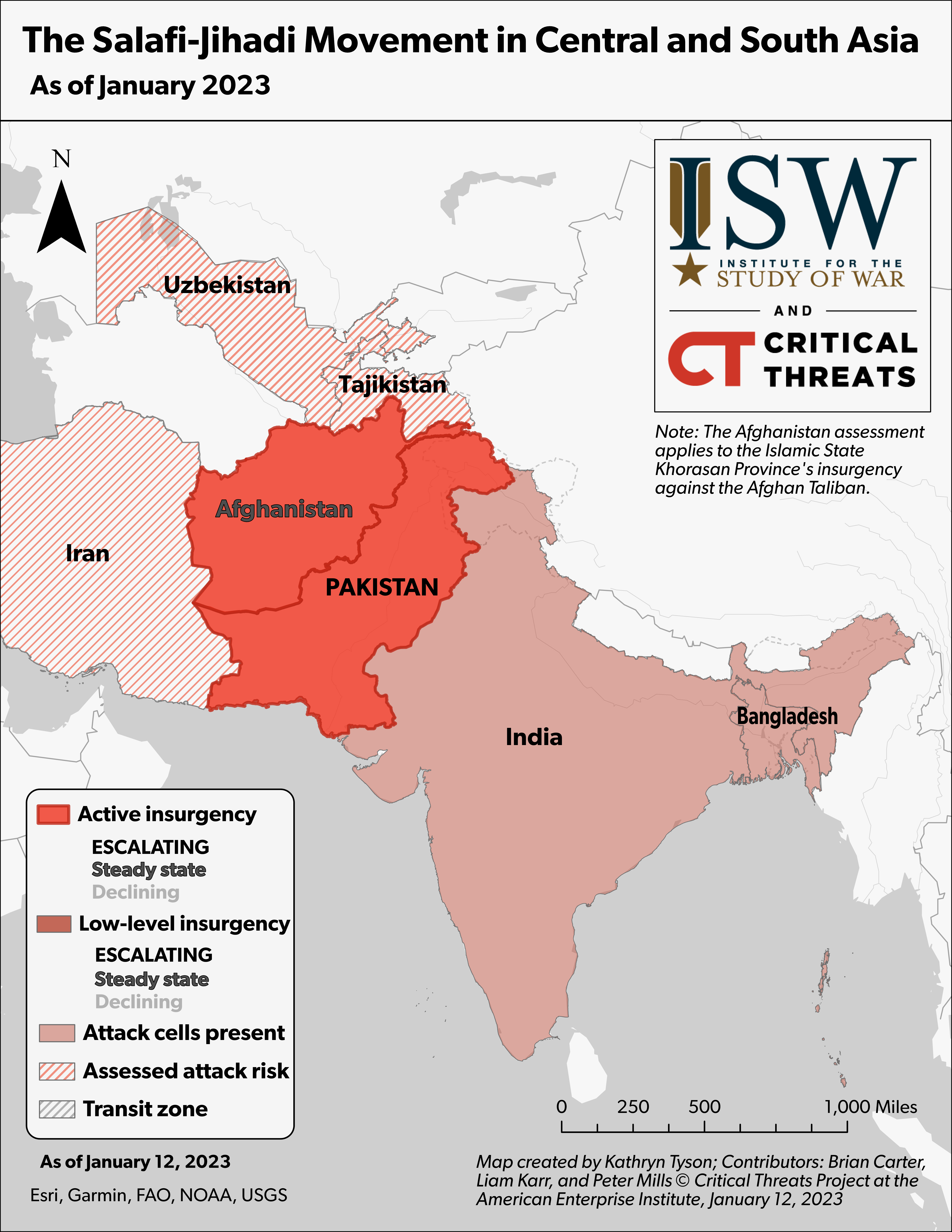 Burkina Faso. The Burkinabe junta is pushing France out of Burkina Faso while growing closer to Russia. Africa Intelligence reported that France will likely remove its special forces mission from Burkina Faso in February.[45] This move, if confirmed, follows months of worsening French-Burkinabe relations since Burkina Faso’s September 2022 coup. This relationship reached a new low after the junta asked France to withdraw its ambassador in early January 2023.[46] Russia is poised to take France’s spot as a security partner, as it has in Mali, where Wagner Group mercenaries are deployed.[47] Mali has facilitated talks between the Burkinabe junta and Russia, including a secret trip by the Burkinabe prime minister to Moscow in December 2022.[48] The Ghanian president and a Russian military observer also alleged that Russian Wagner mercenaries were in Burkina Faso and finalizing a deal with the junta in late December 2022.[49] Wagner has failed to make up for the decreasing Western counterterrorism support in Mali and instead committed numerous human rights abuses that benefit Salafi-jihadi recruitment.[50]

Currently receiving 0 of 12 possible notifications for this sort of content.