Urgent discussion on September 19 among Russia’s proxies of the need for Russia to immediately annex Luhansk and Donetsk oblasts (much of the latter of which is not under Russian control) suggests that Ukraine’s ongoing northern counter-offensive is panicking proxy forces and some Kremlin decision-makers. The legislatures of Russia’s proxies in occupied Ukraine, the Donetsk and Luhansk People’s Republics (DNR and LNR), each called on their leadership to “immediately” hold a referendum on recognizing the DNR and LNR as Russian subjects.[1] Russian propagandist and RT Editor-in-Chief Margarita Simonyan spoke glowingly of the call, referring to it as the “Crimean scenario.” She wrote that by recognizing occupied Ukrainian land as Russian territory, Russia could more easily threaten NATO with retaliatory strikes for Ukrainian counterattacks, “untying Russia’s hands in all respects.”[2]

This approach is incoherent. Russian forces do not control all of Donetsk and Luhansk oblasts. Annexing the claimed territories of the DNR and LNR would, therefore, have Russia annex oblasts that would be by Kremlin definition partially ”occupied” by legitimate Ukrainian authorities and advancing Ukrainian forces. Ukrainian strikes into Russian-annexed Crimea clearly demonstrate that Ukrainian attacks on Russia’s illegally annexed territory do not automatically trigger Russian retaliation against NATO, as Simonyan would have her readers believe. Partial annexation at this stage would also place the Kremlin in the strange position of demanding that Ukrainian forces un-occupy “Russian” territory, and the humiliating position of being unable to enforce that demand. It remains very unclear that Russian President Vladimir Putin would be willing to place himself in such a bind for the dubious benefit of making it easier to threaten NATO or Ukraine with escalation he remains highly unlikely to conduct at this stage.

Russian leadership may be running out of ways to try to stop Ukrainian forces as they advance across the Oskil River CorrectionA previous version of the text incorrectly stated that the Oskil River is in Luhansk Oblast.and closer to Luhansk Oblast. The Kremlin may believe that partial annexation could drive recruitment of additional forces, both from within Russia and from within newly annexed Ukrainian territory. Russian forces are desperately attempting to mobilize additional forces from all potential sources to backfill their heavily degraded and demoralized units but have proven unable to generate significant combat power, as ISW has repeatedly written.[3]

This latest annexation discussion also omits other parts of Russian-occupied southern Ukraine in which the Kremlin was previously planning sham annexation referenda. A willingness to abandon the promise to bring all the occupied areas into Russia at the same time would be a significant retreat for Putin to make in the eyes of the hardline pro-war groups he appears to be courting. It remains to be seen if he is willing to compromise himself internally in such a fashion. The Kremlin’s proxies in Donbas regularly outpace Kremlin messaging, on the other hand, and may have done so again as they scramble to retain their occupied territory in the face of Ukraine’s successful and ongoing counter-offensive.

Recent Ukrainian counter-offensive successes are further reducing the already poor morale among Russian units that had been considered elite before February 24. Independent Belarusian media outlet Vot Tak posted images of intercepted documents left behind by Russian soldiers of Unit 31135 of the 1st Motorized Rifle Regiment of the 2nd Guards Motor Rifle Division as they fled Izyum en masse.[4] The signed documents (dated to August 30, prior to Ukraine’s counter-offensive in Kharkiv on September 7) include written pleas to commanders of Unit 31135 to dismiss the letters’ authors due to persistent “physical and moral fatigue.”[5] Ukrainian intelligence claimed that 90% of the personnel of the 1st Motorized Rifle Regiment wrote damning reports on the state of morale as early as May 23, 2022.[6] The 2nd Guards Motor Rifle Division is one of three divisions of the 1st Guards Tank Army, which, prior to the current war in Ukraine, was considered Russia’s premier mechanized force and was to be Russia’s key force in a large-scale conventional war with NATO.[7] The intercepted letters indicate pervasive morale issues among Russia’s most elite units and the degradation of Russia’s conventional capabilities against NATO. 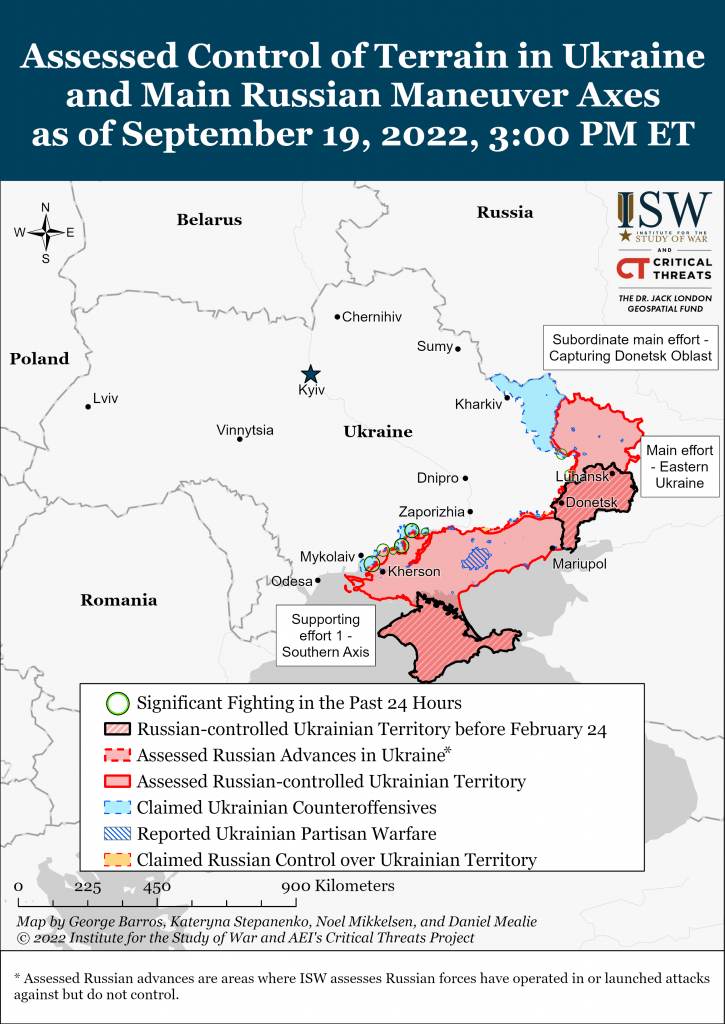 Ukrainian forces likely continued to consolidate their gains on the eastern bank of the Oskil River on September 19. A Russian milblogger claimed that Russian troops destroyed a Ukrainian grouping in Dvorichne, a settlement on the left bank of the Oskil River near the Kharkiv-Luhansk border and approximately 40km south of the Russian border.[8] Another Russian source similarly noted that Russian forces destroyed a Ukrainian pontoon crossing near Dvorichne and that Russian sabotage and reconnaissance groups are operating in the area.[9] These unconfirmed Russian claims suggest that Ukrainian troops have continued limited and localized operations to cross the Oskil River and threaten Russian positions on the opposing bank. A Russian source additionally noted that Ukrainian troops are strengthening their grouping in Kharkiv Oblast using captured Russian T-72 tanks, suggesting that the initial panic of the counter-offensive led Russian troops to abandon higher-quality equipment in working order, rather than the more damaged equipment left behind by Russian forces retreating from Kyiv in April, further indicating the severity of the Russian rout.[10]

Ukrainian forces likely continued offensive operations along the Lyman-Yampil-Bilohorivka line on September 19. Donetsk People’s Republic (DNR) Head Denis Pushilin claimed that fighting is ongoing in Yarova, 20km northwest of Lyman, confirming that Ukrainian troops likely advanced eastward from previously captured positions in Sviatohirsk.[11] Russian sources claimed that Russian forces are still in control of Yampil and Lyman, but that Ukrainian sabotage and reconnaissance groups are operating along the entire Lyman-Yampil-Bilohorivka line.[12] Geolocated combat footage confirms that Ukrainian troops have retaken Bilohorivka, which lies along the Donetsk-Luhansk Oblast border and within 20km of the Lysychansk-Severodonetsk area.[13] 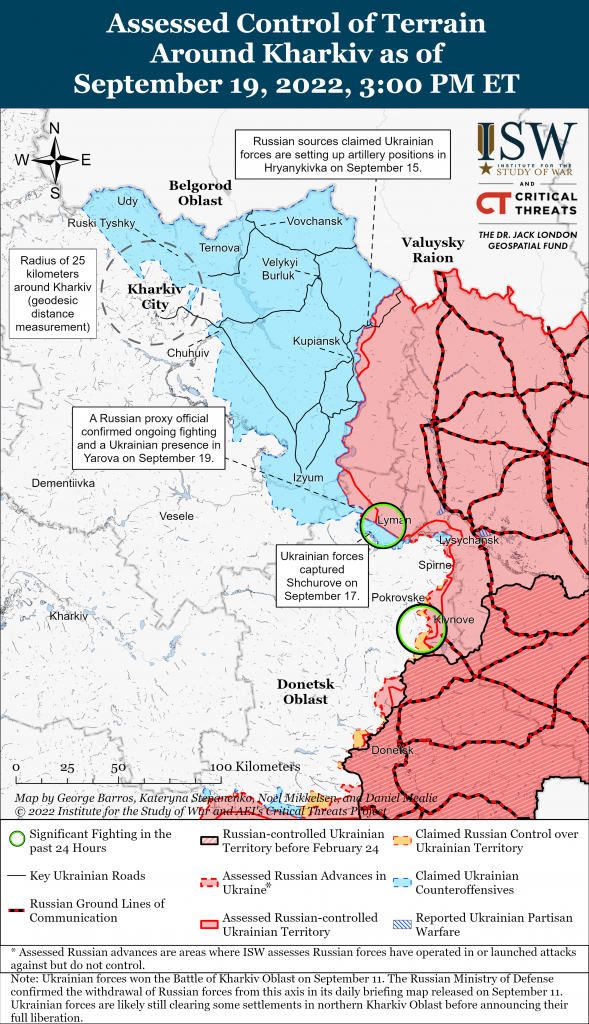 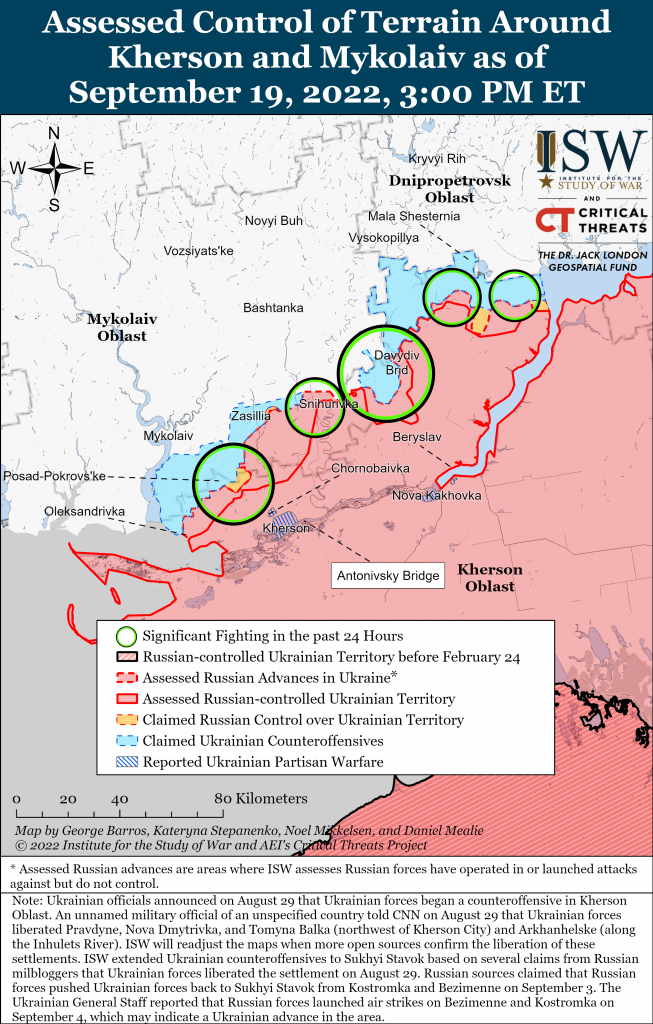 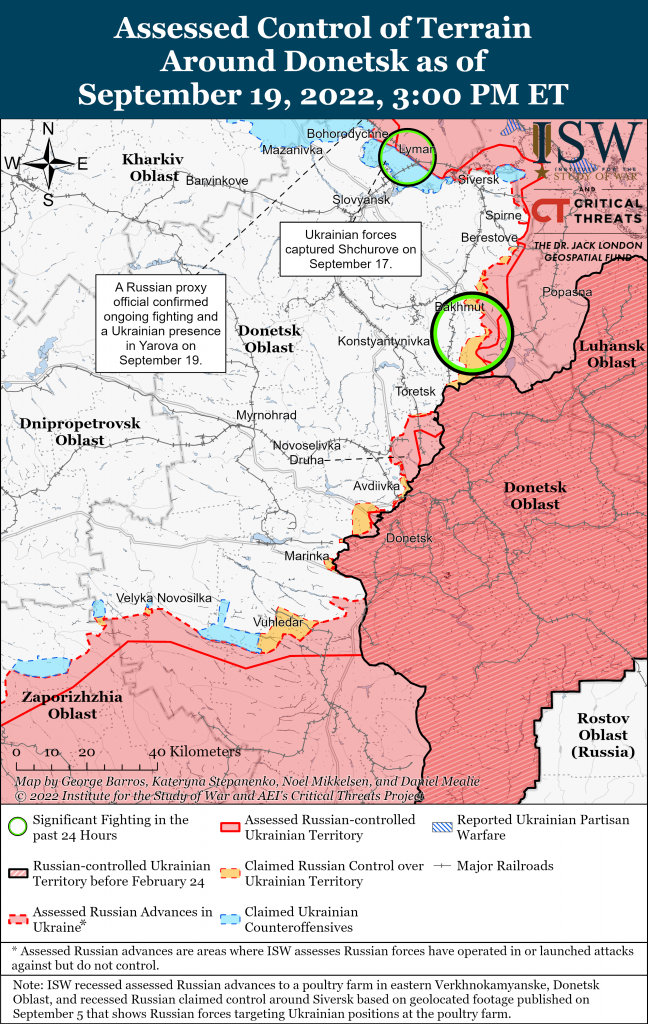 The effective size of volunteer units Russia can generate is likely decreasing. Republic of North Ossetia-Alania head Sergey Menyaylo announced the formation of a new combined volunteer “detachment” on September 19.[35] Menyaylo said that the detachment will be primarily made up of reservists and combat veterans, that some of the detachment is already in training, and that the detachment will be fully formed by the end of September to deploy to Ukraine. Detachments vary in size but are by definition smaller than the volunteer battalions that Russian regions originally organized. A Russian milblogger separately claimed on September 19 that an unnamed combined company from the Nenets Autonomous Okrug deployed to Donbas after completing training in Murmansk.[36] Russian forces have used steadily smaller echelons as their main tactical units — moving from battalions to companies and in some cases platoons dramatically reducing the combat power the new units bring.

Russian occupation authorities are attempting to mobilize additional forces from Ukrainian civilians in Russian-occupied Ukrainian territory. Ukraine’s Main Military Intelligence Directorate (GUR) reported on September 19 that Russian forces are failing to mobilize additional forces from occupied Luhansk Oblast and that local occupation officials failed to meet a 500-person quota for mobilization in Severodonetsk to replenish the depleted 2nd Army Corps, the armed forces of the Luhansk People’s Republic (LNR).[37] The GUR also reported that Russian occupation officials held a meeting in occupied Myrne, Kherson Oblast to discuss mobilizing local Ukrainian men to fight on Russia’s behalf. The Ukrainian Resistance Center reported on September 19 that occupation authorities rounded up all men under 40 years of age in Portivske, Mariupol Raion for forced mobilization.[38] Portivske is not part of the pre-February 24 borders of the Russian proxy Donetsk People’s Republic (DNR) and therefore would not have provided DNR units for the invasion. The Ukrainian Resistance Center also reported that women in Alchevsk, within the pre-February 24 borders of the DNR, rioted and tried to block a busload of mobilized men from leaving the town.

Russian forces are likely funneling low-quality Russian nationals derived from prisons or forced mobilizations into the already low-quality 1st and 2nd Army Corps, which are made of up DNR and LNR proxies respectively. Ukraine’s General Staff reported on September 19 that Russian forces set up a training facility in Torez, (also known as Chystiakove), Donetsk Oblast to train personnel recruited from prisons who will then be deployed to supplement the heavily degraded 1st Army Corps.[39]