Mariupol defenders trapped in the Azovstal Steel Plant likely surrendered after Ukrainian officials negotiated evacuation measures with the Kremlin. Russian forces began evacuating wounded Ukrainian forces to Russian-occupied settlements in Donetsk Oblast on May 16 after the Russian Defense Ministry proposed the agreement earlier in the day. Ukrainian officials said that they will seek to return the Mariupol defenders to Ukraine in a prisoner exchange and continue to undertake appropriate measures to rescue all Ukrainian servicemen from Azovstal.

The Kremlin might have agreed to the conditional surrender of the Azovstal defenders to accelerate Russia’s ability to declare Mariupol fully under its control. The Ukrainian Military Intelligence Directorate (GUR) reported that the Russian Defense Ministry’s Department of Information and Mass Communications is hastily preparing a press tour of foreign journalists through occupied territories of Ukraine between May 18 and May 21.[1] The Kremlin also could have agreed to such a deal to secure a victory in order to deflect criticism on social media of the failed Russian Siverskyi Donets River crossings and the overall slow pace of the invasion.

The surrender agreement generated some outrage and confusion on pro-Russian social media, rather than the celebration of the full capitulation of Mariupol that the Kremlin likely expected—possibly undermining Russian information operations. Some Russian Telegram channels ridiculed the Russian Defense Ministry for negotiating with Ukrainian “terrorists” and “Nazis.”[4] Some bloggers criticized the Donetsk People’s Republic for organizing the evacuation proceedings and blamed negotiating authorities for creating conditions for Ukrainian martyrdom.[5] Several Russian bloggers also called for the imprisonment or murder of surrendered Ukrainian servicemen.[6] Russian audiences are likely dissatisfied with the surrender agreement because they expected Russian forces to destroy Ukrainian defenders at Azovstal. The Kremlin has created large amounts of propaganda that portrayed successful Russian assaults on Azovstal without clearly setting conditions for surrender negotiations. Some Russians may find it difficult to reconcile the triumphant messaging with the abrupt negotiations leading to a negotiated surrender.

Russian forces have intensified artillery fire on Ukrainian border settlements in Chernihiv and Sumy oblasts over the past few weeks. The Ukrainian Northern Operational Command reported that Russian forces shelled the border between Sumy Oblast and Russia over 70 times on May 17.[7] Sumy Oblast Administration Head Dmytro Zhyvytskyi said that Russian saboteurs unsuccessfully attempted to break through the Ukrainian border on May 17.[8] 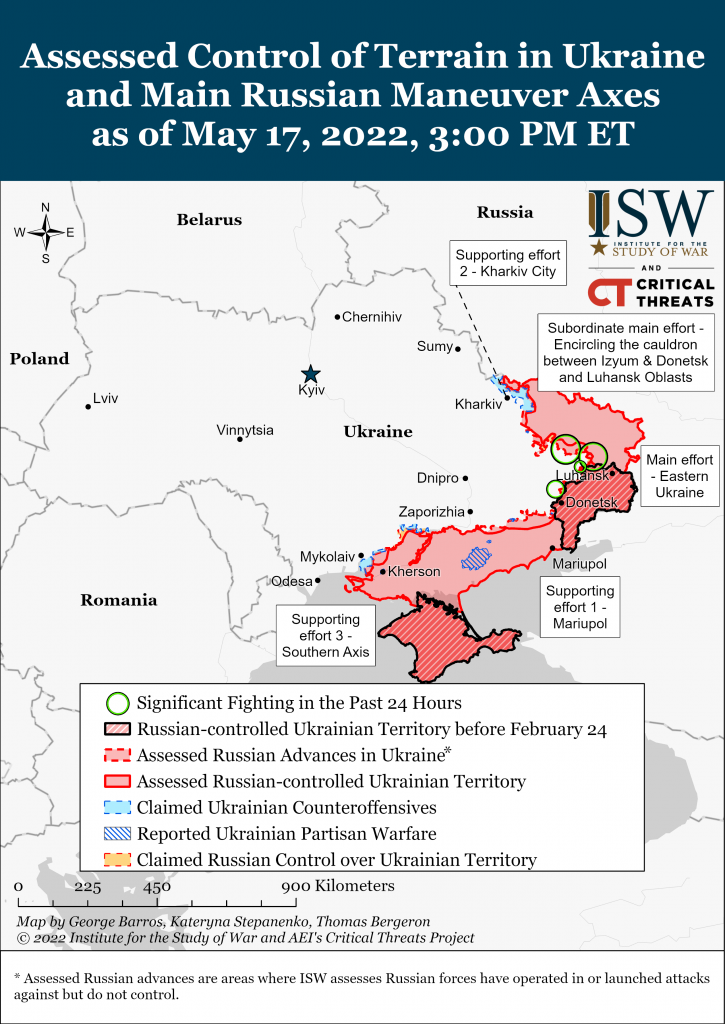 ISW has updated its assessment of the four primary efforts Russian forces are engaged in at this time. We have stopped coverage of supporting effort 4, “Sumy and northeastern Ukraine,” because it is no longer an active effort.

Russian forces unsuccessfully attempted to improve their tactical positions south of Izyum to resume offensive operations in that sector. The Ukrainian General Staff reported that Russian forces are replenishing troops and accumulating reserves to renew their drive on Slovyansk.[9] Russian forces likely did not secure the highway east of Dovhenke—a village approximately 30 km south of Izyum; that highway is necessary to continue the advance toward Slovyansk. Russian aviation attacked Ukrainian positions near Izyum, and Russian ground forces made limited territorial advances in the Lyman district.[10] Ukrainian artillery reportedly destroyed Russian equipment just 15 km north of Izyum on May 17.[11]

Russian forces continued their efforts to secure highways to Lysychansk from the south and Bahmut from the east with insignificant progress. Russian forces advanced a small distance north of Popasna in an effort to reach a major road connection to Severodonetsk.[12] The Luhansk People’s Republic claimed to have seized Novozvanivka just southwest of Popasna on the way to the Bahmut-Lysychansk highway but have likely not entered the settlement judging from reports of Russian shelling in the area, which suggest that Ukrainian defenders are still there.[13] The Ukrainian General Staff reported that Russian forces conducted an unsuccessful assault on a settlement 6 km southeast of Severodonetsk on May 17.[14]

Russian forces may be pushing hard to win the Battle of Severodonetsk in part to forestall emerging criticism of the Russian military campaign in the domestic information space. Russian State Duma Deputy from the Communist Party Viktor Sobolev expressed surprise over the lack of significant victories in Donbas compared to a number of successful operations in 2014.[15] Sobolev said that Russian forces must finally finish up the “special military operation” in Donbas and at least create an effective cauldron (encirclement) in Severodonetsk. Sobolev also criticized the Russian command for initiating a large-scale offensive operation without destroying Ukrainian strike capabilities. Luhansk Oblast Head Serhiy Haidai claimed that Russian forces are committing most of their combat power to a shallow encirclement to reassure the Russian population of Russian successes in Ukraine.[16] Pro-Russian Telegram channels began celebrating the arrival of a BMPT “Terminator” urban warfare vehicle in Severodonetsk’s vicinity, portraying it as a Russian wonder weapon.[17] 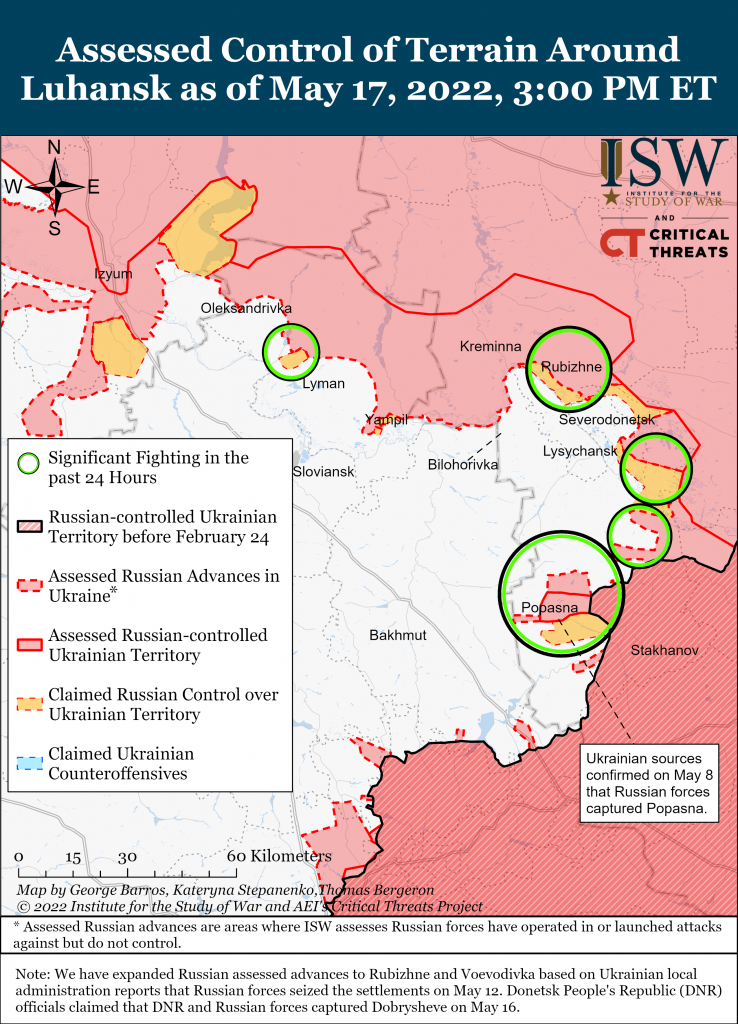 The Ukrainian military command ordered defenders at the Azovstal Steel Plant to surrender to Russian forces.[21] Russian officials likely accepted the Ukrainian surrender and evacuated over 260 wounded servicemen on May 16. The Ukrainian Military Intelligence Directorate (GUR) announced that Ukrainian officials will attempt to negotiate prisoner exchanges for Mariupol defenders and undertake further unspecified measures to rescue the remaining servicemen.[22] The Russian Defense Ministry posted videos of a mass evacuation of the Azovstal on May 17, but ISW cannot confirm if all of Mariupol’s defenders left the plant.[23] Reuters reported that at least seven buses with Ukrainian servicemen who did not appear wounded left Mariupol on May 17.[24] Russian media also filmed the Donetsk People’s Republic forces reportedly demining Azovstal.[25] 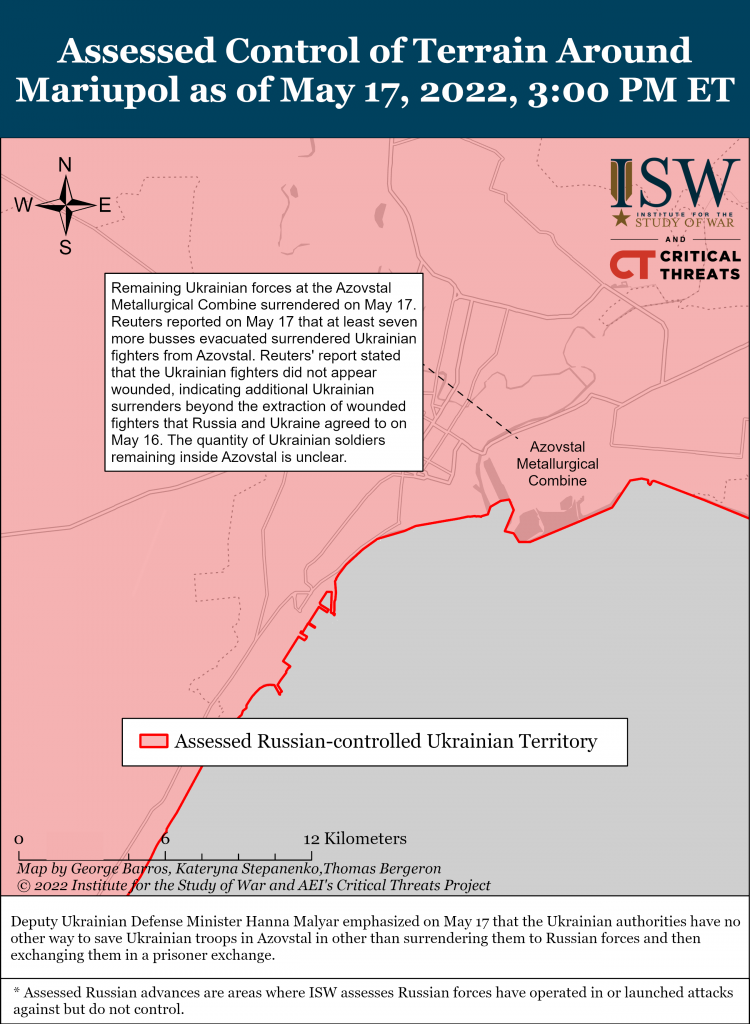 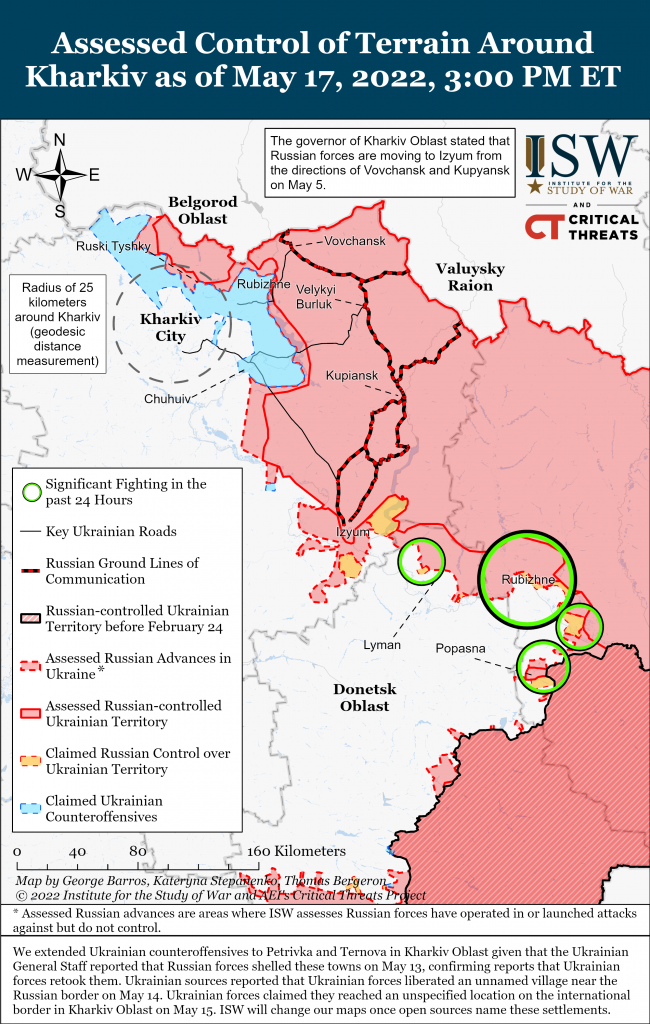 Russian forces did not conduct offensive operations throughout the southern axis on May 17.[29] The Ukrainian General Staff reported that Russian forces continued to reinforce defense lines with concrete structures and fired on Ukrainian positions.[30] The Russian Defense Ministry claimed that Russian forces prevented a large-scale Ukrainian counteroffensive in a settlement approximately 30 km west of the Donetsk and Dnipropetrovsk oblasts, but ISW cannot independently verify these claims.[31]

Russian forces are continuing to pressure Ukrainian civilians into accepting Russian occupation in southern Ukraine. The Zaporizhia Military Administration reported that Russian forces are preparing for a referendum in Enerhodar.[32] The Ukrainian Southern Operational Command said that Russian forces are continuing to set information conditions to promote the creation of a proxy republic or a Russian province in occupied settlements of Kherson and Mykolaiv oblasts.[33] The Ukrainian Resistance Center reported that locals found two Russian soldiers dead in Melitopol, likely due to Ukrainian partisan activity in the area.[34]

Russian forces continued to launch rocket- and airstrikes on Odesa and Mykolaiv oblasts in an effort to disrupt transportation infrastructure in the region. The Ukrainian Southern Operational Command reported that Russian forces launched two cruise missiles at a bridge over the Dniester estuary on May 17.[35] The bridge connects Odesa Oblast with the highway to Romania and has reportedly been damaged and out of operation for over two weeks. Russian forces likely seek to destroy the bridge beyond the possibility of repair to disrupt Ukrainian supply lines from Romania. The Ukrainian Southern Operational Command also reported that Russian forces struck maritime infrastructure 70 km southwest of Mykolaiv Oblast.[36] 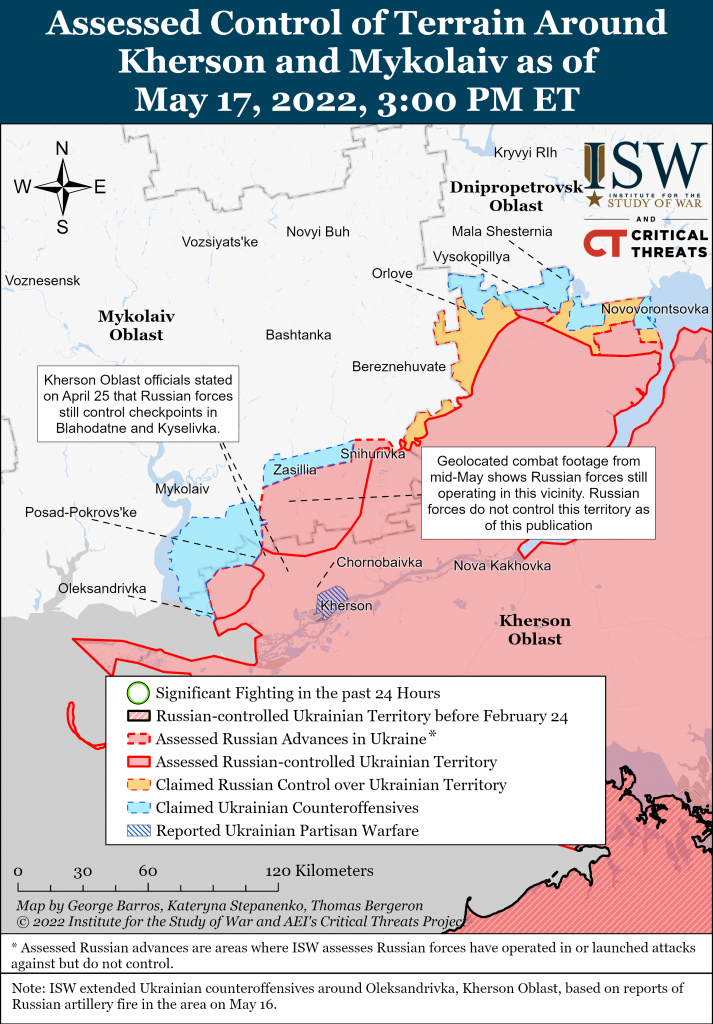