Russian forces are setting conditions to establish permanent control over the areas of southern Ukraine they currently occupy, either as nominally independent “People’s Republics” or by annexing them to Russia. Russian sources reported that stores in occupied Melitopol and Volnovakha are beginning to transition to using the Russian ruble.[1] British Defense Intelligence reported that the ruble will be used in Kherson City starting on May 1 as part of a 4-month currency transition scheme enacted by the occupation administration.[2] These measures, which are not necessary or normal in military occupation administrations, indicate that Russian President Vladimir Putin likely intends to retain control over these areas and that his ambitions are not confined to Donbas.

Western and Ukrainian sources claimed that Russian President Vladimir Putin may announce a “general mobilization” of the Russian military on May 9th. British Defense Minister Ben Wallace claimed that Putin may make this announcement, although Wallace admitted this was a personal opinion and not based on intelligence.[3] Advisor to the Ukrainian President Mikhail Podolyak amplified Wallace’s claims and stated that a general mobilization on May 9 would be consistent with the economic imperatives faced by Russia as a result of the invasion of Ukraine.[4] ISW has no independent verification of these claims, which would not in any event generate large numbers of usable soldiers for many months.

The Kremlin likely seeks to leverage its partners in the Collective Security Treaty Organization (CSTO) to evade Western sanctions. The Ukrainian Main Military Intelligence Directorate (GUR) reported that Russia is courting CSTO members to procure input goods and materials for dual-use technologies that Russia cannot directly purchase due to Western sanctions.[5] The GUR stated that this effort will increase CSTO members’ economic dependence on Russia and enable Russian sanction evasion by using third-party countries to re-export Russian products to international markets.[6] The GUR stated that the Russian Ulyanovsk Mechanical Plant is attempting to obtain German components needed for the production of Buk surface-to-air missile systems and Tunguska missiles via Kazakhstan. Western sanctions may need to target Russia’s partners in the CSTO and Eurasian Economic Union (EAEU) customs union to prevent Russian sanctions evasion. 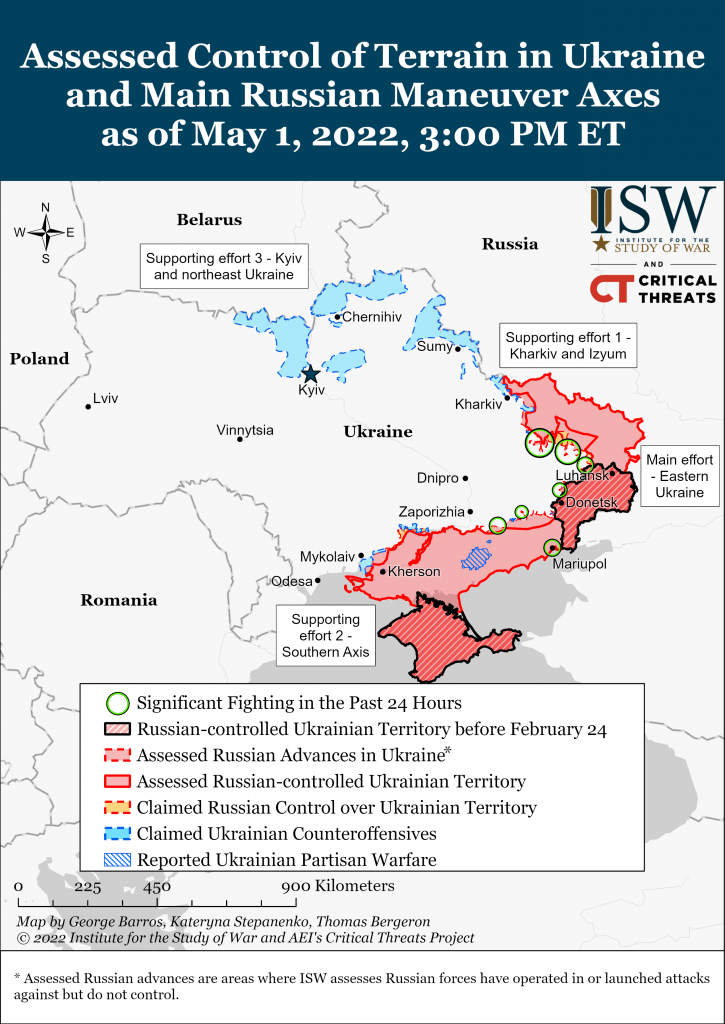 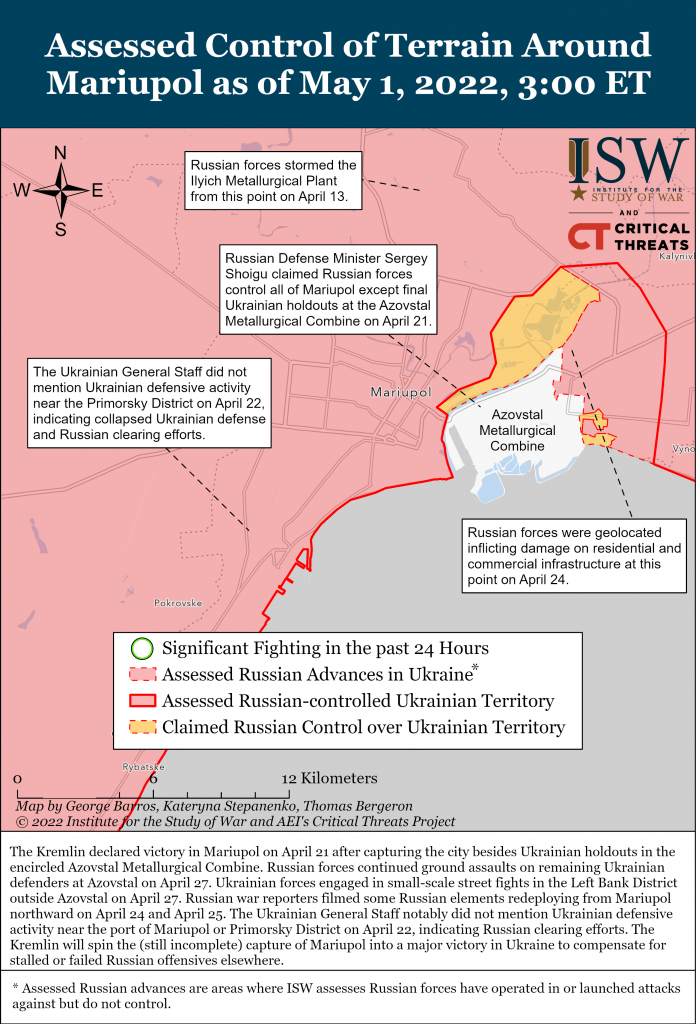 No significant kinetic activity was reported in Mariupol. The Ukrainian Mariupol City Council stated that civilians in Azovstal began to evacuate to Zaporizhzhia.[7] 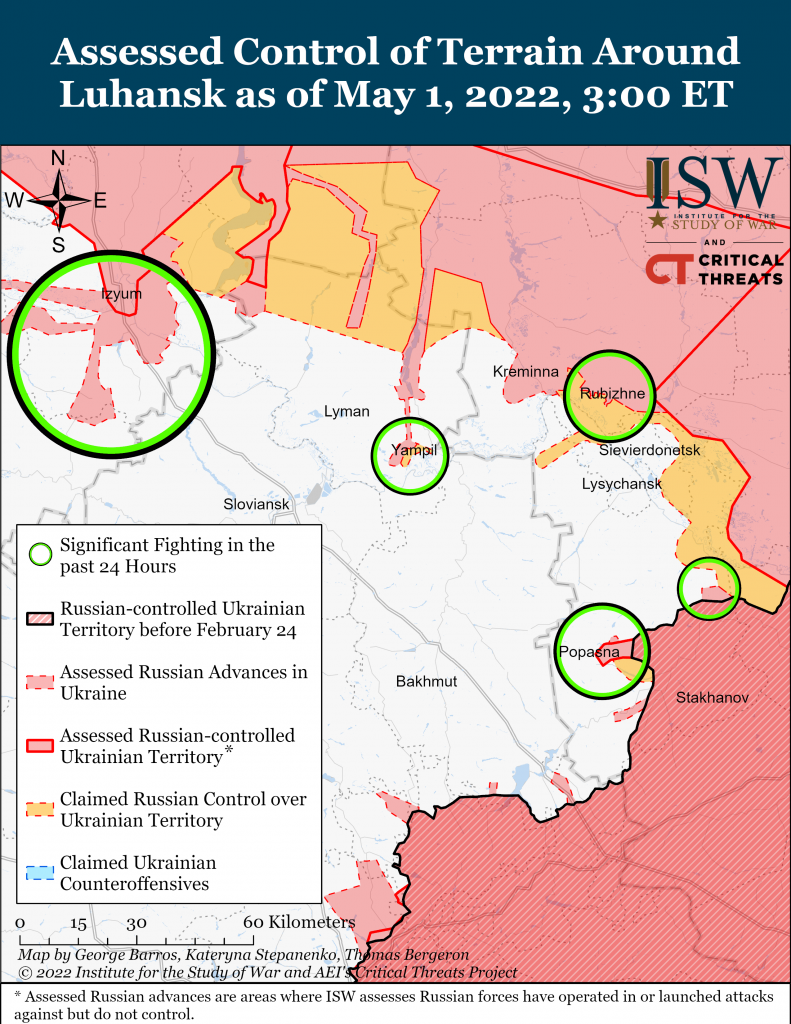 Russian forces continued to conduct unsuccessful ground assaults along the Donetsk-Luhansk frontline and did not make any substantial territorial gains on May 1.[8] Russian troops continued to focus efforts on completing the seizures of Rubizhne and Popasna with ground assaults supported by artillery.[9] The Ukrainian General Staff stated that Russian forces are blocking Ukrainian positions in the vicinity of Rubizhne and Popasna to prevent Ukrainian forces from maneuvering.[10] The Ukrainian General Staff also reported that Russian forces made limited advances in the direction of Lyman via Krymky and Oleksandrivka and attempted to advance toward Kurakhove via Olenivka and Novomykhailvka.[11]

Russian attacks on Ukrainian defensive positions along the pre-February 24 front lines continue to fail to make substantial progress. Repeated Russian failures to capture villages such as Zolote and Vilne suggest that pre-invasion Ukrainian defensive positions are too strong for Russian troops to storm. Russian forces are experiencing relatively more success pushing southwestward in Donetsk Oblast in the Lyman direction, however.[12] The Ukrainian General Staff reported that Russian forces mounted an unsuccessful attack against Ozerne, which indicates that Russian forces have likely made limited gains to the south and west of Yampil (which is less than 15 km southeast of Lyman) in the past 24 hours.[13] 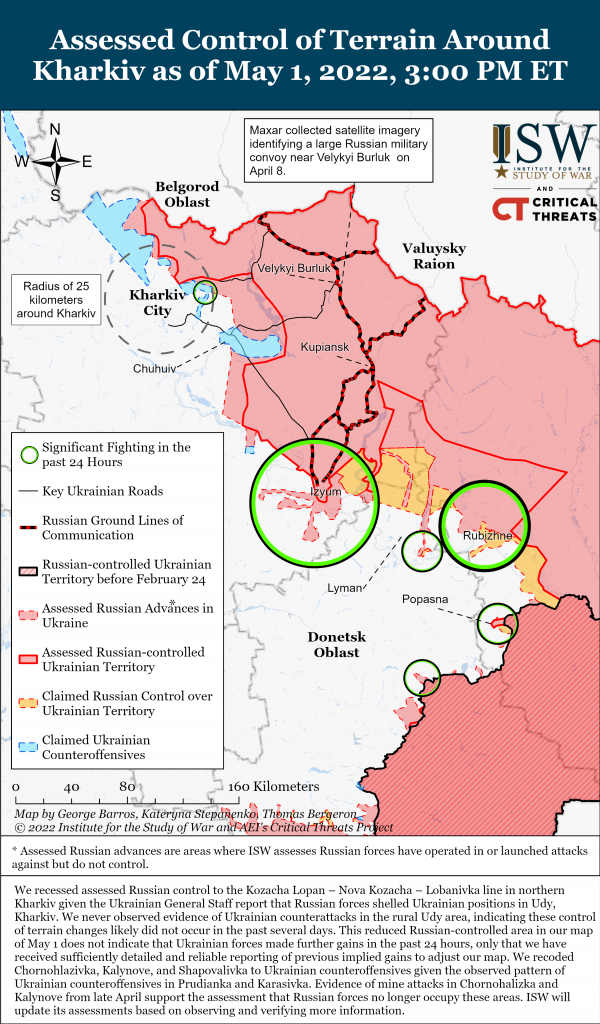 Ukrainian forces likely conducted rocket artillery strikes against a command post of the Russian Airborne Forces (VDV) and 2nd Combined Arms Army in Izyum on April 30.[14] Advisor to the Head of the Ukrainian President’s Office Oleksiy Arestovych claimed that the strike may have killed Major General Andrei Simonov (reportedly the head of the Western Military District's electronic warfare troops), the chief of staff of the VDV, and other Russian officials.[15] A senior US defense official reported that Chief of the Russian General Staff Army General Valery Gerasimov was present at the headquarters in Izyum but had departed to Russia before the strike.[16] Gerasimov may have been conducting a battlefield circulation (BFC) to evaluate the state of the Russian offensive in the Izyum direction. Gerasimov may have been trying to establish why the Russian offensive has largely stalled out on the Izyum axis and whether it is worth continuing to invest in strengthening their offensive grouping in that area instead of switching the operational focus to the Lyman axis of advance in Donetsk, where Russian troops are having more relative success, or other areas.[17] Commanders, even senior commanders, often conduct such BFCs in important areas to gain a better concrete and specific sense of the situation and, importantly, of the morale and capability of the individuals and units operating there. It is more likely that Gerasimov was conducting such a BFC than that he had actually taken command of military operations on this axis, as unconfirmed sources had previously reported.

Russian forces continued to shell the suburbs of Kharkiv City.[18] The Ukrainian General Staff notably reported that Russian forces are firing on Ukrainian positions near Udy and Prudyanka, both north of Kharkiv City and within 20 kilometers of the Russian border.[19] ISW did not observe evidence of Ukrainian counterattacks or Russian withdrawals from the rural Udy area. The report of Ukrainian positions in Udy suggests that Ukrainian forces hold more territory to the north of Kharkiv City than ISW had previously assessed. We have adjusted our maps to reflect this new information, which does not in our judgment reflect a recent change in the situation. 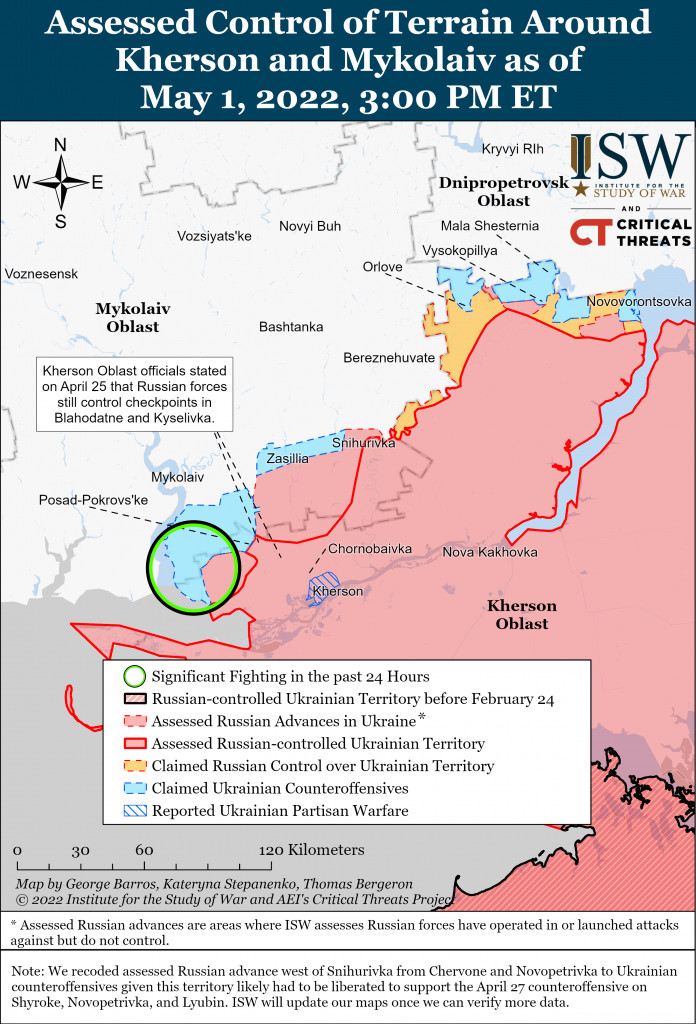 Russian forces continued regrouping and reconnoitering on the Southern Axis and did not make any confirmed advances on May 1.[20] The Ukrainian General Staff reported that Russian forces are attempting to set conditions to mount an offensive in the directions of Mykolaiv and Kryvyi Rih, although ISW cannot independently confirm this forecast at this time.[21] A Russian assault on Mykolaiv and Kryvyi Rih that occurs simultaneously with the battle for Donbas would divide Russian efforts and resources on the Southern Axis in a manner reminiscent of the initial failed Russian invasion plan.

Russian forces conducted an Onyx missile strike on an airbase in Odesa on May 1.[22] Recent increased Russian strikes on Odesa, along with continued dissemination of disinformation in Transnistria, may indicate that Russian forces are preparing for a drive on Odesa ostensibly from east and west, and possibly (in theory) supported by amphibious operations.[23] We do not judge that Russian forces have the capability to conduct such a large and complex operation at this stage of the war, or that they could plausibly threaten to seize Odesa. Russian forces may try to do so anyway or may hope that appearing to prepare for such an operation will draw Ukrainian forces to the area around Odesa. 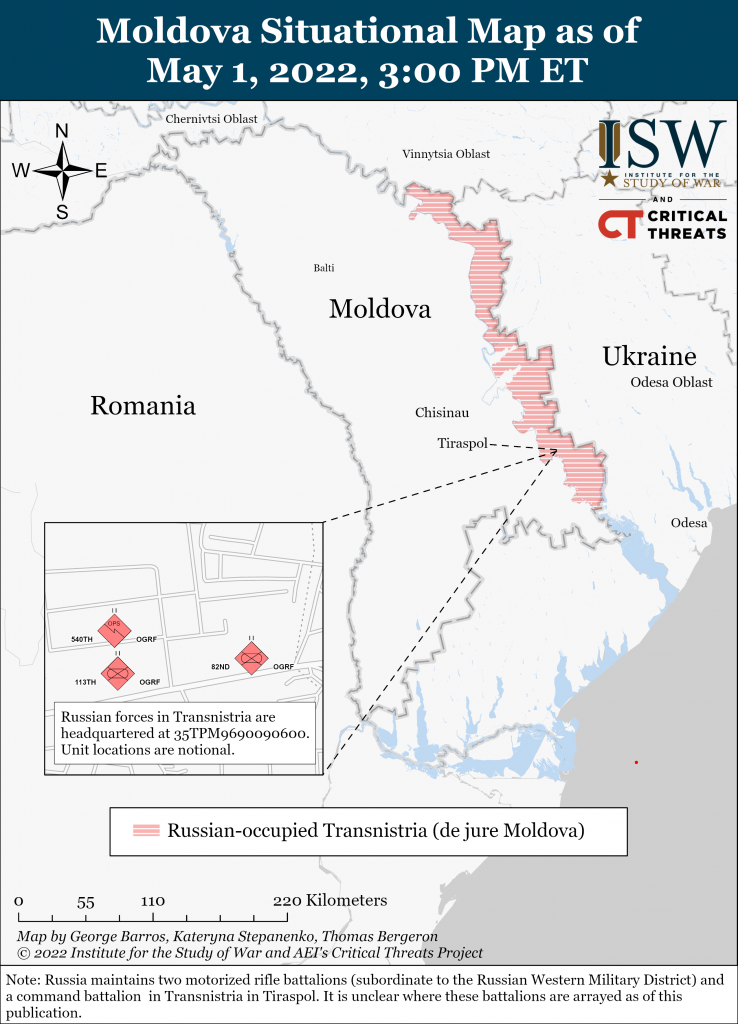