The Russians have not yet abandoned their attacks on Kyiv, claims by Russian Defense Ministry officials notwithstanding. Russian forces continued fighting to hold their forwardmost positions on the eastern and western Kyiv outskirts even as badly damaged units withdrew to Russia from elsewhere on the Kyiv and Chernihiv axes. The Russian high command has likely concluded that it cannot seize Kyiv and may not be able to move artillery closer to the center of the city. It may have decided to stop its previous practices of forcing units that have already taken devastating losses to continue hopeless offensive operations and of feeding individual battalion tactical groups into the battle as they become available rather than concentrating them to achieve decisive effects. Russian officials are likely casting these decisions driven by military realities as overtures demonstrating Russia’s willingness to engage in serious ceasefire or peace negotiations, possibly to conceal the fact that they have accepted the failure of their efforts on the Kyiv axis.

Russia continues to reinforce its efforts in Ukraine’s northeast likely attempting to link its positions southeast of Kharkiv and Izyum with its forces in Luhansk Oblast. The Russians have reportedly redirected forces from the Chernihiv-Kharkiv axis to the Izyum-Slovyansk axis, most likely reassigning reinforcements rather than redeploying units already committed to fighting. Russian forces in the Izyum-Slovyansk area continue fighting to hold and expand their penetration to the southeast.

The Russian advance in Mariupol continues to gain ground, and Russian forces have likely bisected or even trisected the city. Pockets of Ukrainian defenders continue to hold out in Mariupol, likely in several areas, but the Russians will likely complete the conquest of the city within days. Russian forces have likely taken significant casualties in the tough urban fighting in Mariupol, making it difficult to evaluate how much combat power the Russians will be able to harvest from Mariupol to use for further advances north and west.

Russian operations in southeastern Ukraine have left large portions of Donetsk Oblast under Ukrainian control. Securing the boundaries of Donetsk Oblast along with the entirety of Luhansk Oblast will likely require a major offensive operation. Much of the area of Donetsk Oblast outside Russian control is flat and sparsely populated—terrain similar to that on which Russian forces elsewhere have been able to advance rapidly, at least earlier in the war. Russian offensive operations in similar terrain more recently have struggled, however. It is too soon to tell how feasible the Russian conquest of all of Donetsk and Luhansk will be for the Russian military in its current state.

CorrectionWe fixed a labeling error on the legend. This labeling fix did not change any analytical content on the map. 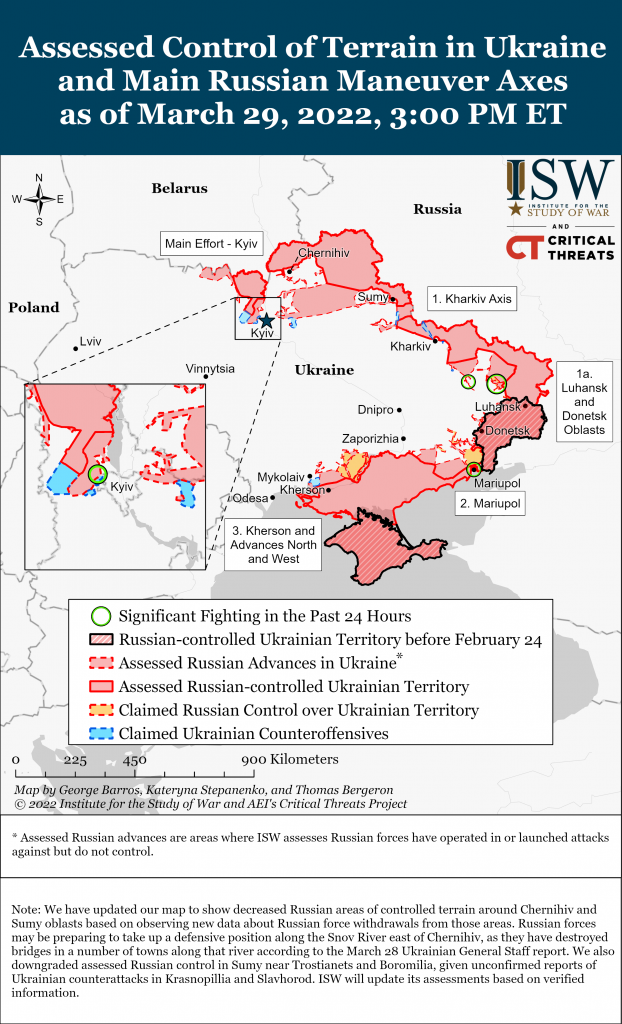 Russia reportedly continues to struggle in its efforts to generate new combat power and replenish equipment. The Ukrainian General Staff reported on March 29 that Russian troops are drawing equipment out of long-term storage in Boguchar, Voronezh Oblast, but that 40% of that equipment is inoperable.[1] The General Staff also reported that Russian efforts to generate reinforcements from the Pacific Fleet could not produce even a single battalion because of refusals to fight.[2] We have no independent confirmation of these assessments, but Russian Defense Minister Sergei Shoigu‘s March 29 statement that Russia would not deploy conscripts to “hot spots” corroborates assessments of Russian soldiers’ unwillingness to enter the war.[3] The UK Ministry of Defense reported on March 28 that the Wagner Group is deploying forces, including senior leaders, to eastern Ukraine to make up for heavy Russian combat losses.[4]

Main effort—Kyiv axis: Russian operations on the Kyiv axis were aimed at encircling the city from the northwest, west, and east. It is unclear if forces on this axis have been given a new mission and, if so, what it might be.

Russian forces have likely abandoned efforts to encircle or seize Kyiv at this time, although they continue to fight to hold their current front lines on both banks of the Dnipro River. Multiple Ukrainian and Western reports indicate that some Russian forces are pulling back from the Kyiv axis.[5] Belarussian media showed videos of Russian forces moving back into Belarus from Ukraine on March 28 and March 29.[6] Russian forces continue to defend their current front-line trace, however, according to the Ukrainian General Staff and additional reporting below.[7] The Russians reportedly continued to bring artillery and missiles, including Iskander systems, toward the Ukrainian border in Belarus, presumably for use in the Kyiv and Chernihiv region.[8]

Russian forces are actively resisting Ukrainian counteroffensives in the Irpin and Hostomel areas and continued to shell Makariv and Irpin on March 29.[9] Russian troops remain dug in in the Bucha and Nemishyev areas just northwest of Irpin.[10] Russian artillery and rockets continue to fire at Ukrainian positions at many locations north and west of the capital.[11]

The Ukrainian General Staff reported on March 29 that Russian forces are attempting to hold their current positions in and around Brovary on the east bank of the Dnipro River.[12] Russian forces remained in likely isolated or encircled positions around Bashyrivka, roughly 58 kilometers from Kyiv, on March 29, and at Kalytyanske and Velyka Dymerka, roughly 48 and 31 kilometers east of Kyiv respectively.[13]

Russian forces continued their encirclement and bombardment of Chernihiv city on March 29.[14]

The Ukrainian General Staff reported on March 29 that elements of the Russian 1st Guards Tank Army that had been concentrated in Russia near Sumy were diverted to “different directions”—presumably toward the southeast.[15] Another Ukrainian source noted that elements of the 1st Guards Tank Army were reinforcing Russian positions around Kamyanka, roughly 130 kilometers southeast of Kharkiv and close to the city of Izyum, which the Russians bypassed.[16] It is not clear if these are the same forces.

Russian forces may be preparing to take up a defensive position along the Snov River east of Chernihiv, as they have destroyed bridges in a number of towns along that river according to the March 28 Ukrainian General Staff report.[17] This activity combined with the reported reallocation of reserve units from the Sumy area could indicate preparations to separate the lines of advance from Kharkiv east toward Kyiv from the axis driving south through Chernihiv toward the capital. 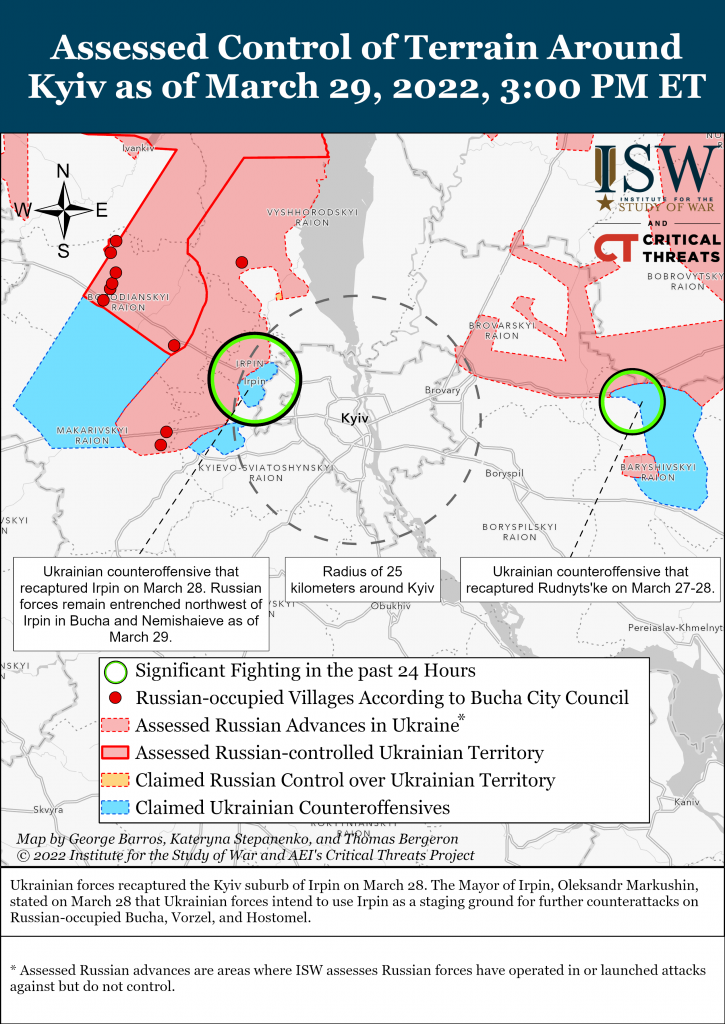 Russian forces do not appear to have conducted significant operations in or immediately around Kharkiv in the last 24 hours.

Russia reinforced its efforts to take Slovyansk, roughly 160 kilometers southeast of Kharkiv, with elements of the 20th Combined Arms Army in addition to the elements of the 1st Guards Tank Army reportedly diverted from near Sumy.[18] Fighting along the road from near Izyum toward Slovyansk continued on March 29.[19] 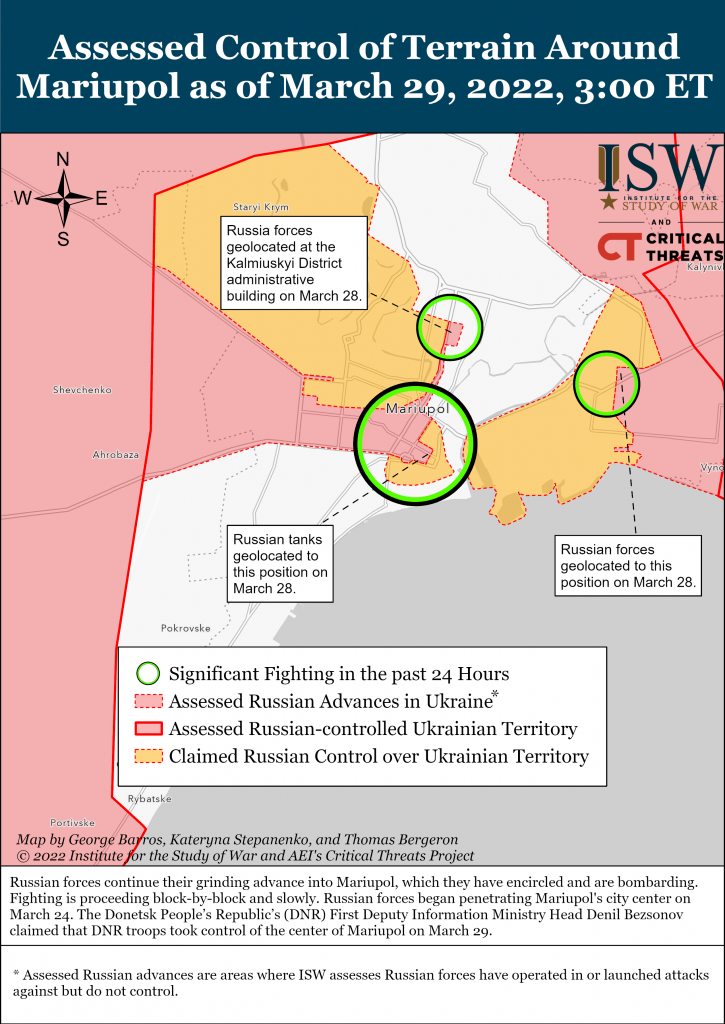 There were no reported significant changes in the situation in the Kherson or Zaporizhiya regions in the last 24 hours.