Russian forces are escalating the use of psychological and information operations to damage the morale of Ukrainian soldiers. The Ukrainian Main Intelligence Directorate (GUR) reported on June 8 that Russian forces are sending threatening messages to the personal devices of Ukrainian servicemen calling on them to betray their service oaths, lay down their arms, surrender, or defect to Russia.[i] The GUR reported that Russian forces are sending messages on a variety of platforms including SMS, Telegram, Viber, Signal, and WhatsApp and that the messages use location information to threaten to harm Ukrainian soldiers or their family members. Ukrainian military expert Dmytro Snegirov additionally noted that Russian propagandists are conducting informational and psychological campaigns to spoil the morale of Ukrainian troops by disseminating information that the battle for Severodonetsk will become the “next Mariupol.”[ii] These information and psychological attacks likely seek to lower the morale of Ukrainian servicemen as operations on multiple axes of advance continue to generate high causalities on both the Ukrainian and Russian sides.

Russian military commanders continue to face force generation challenges. The Ukrainian Southern Operational Command reported that Russian military enlistment offices in Crimea are falsifying the results of mandatory medical exams administered during the summer conscription period to maximize the number of recruits.[iii] Russian police also arrested a man who threw a molotov cocktail and set fire to a local Crimean administration building in protest of the Russian invasion of Ukraine, likely indicating growing discontent with Russian war efforts in Crimea.[iv] ISW has previously reported that forced mobilization in the Donetsk and Luhansk People’s Republics (DNR and LNR) is exacerbating social tensions and sparking protests in Donbas.[v] The Ukrainian General Staff also reported that unspecified elements of the 106th and 76th Guards Airborne Assault Divisions refused to participate in combat in Luhansk Oblast and returned to Russia. The 76th Guards Airborne Assault Division previously participated in assaults on Kyiv, Izyum, and Popasna, which has likely led to the demoralization of troops.[vi] 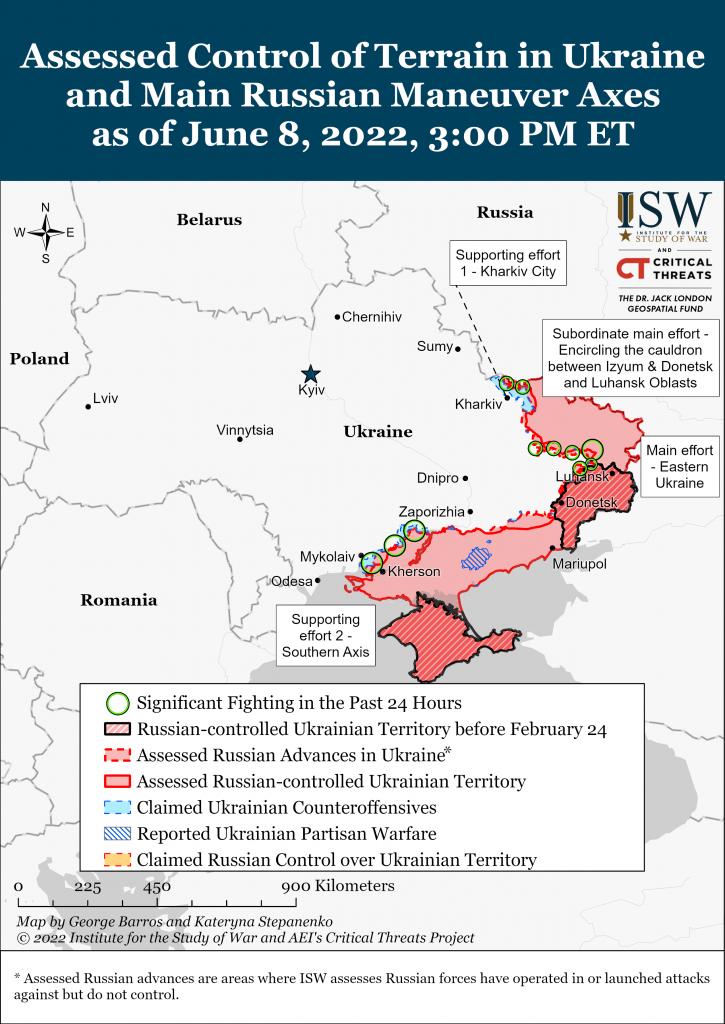 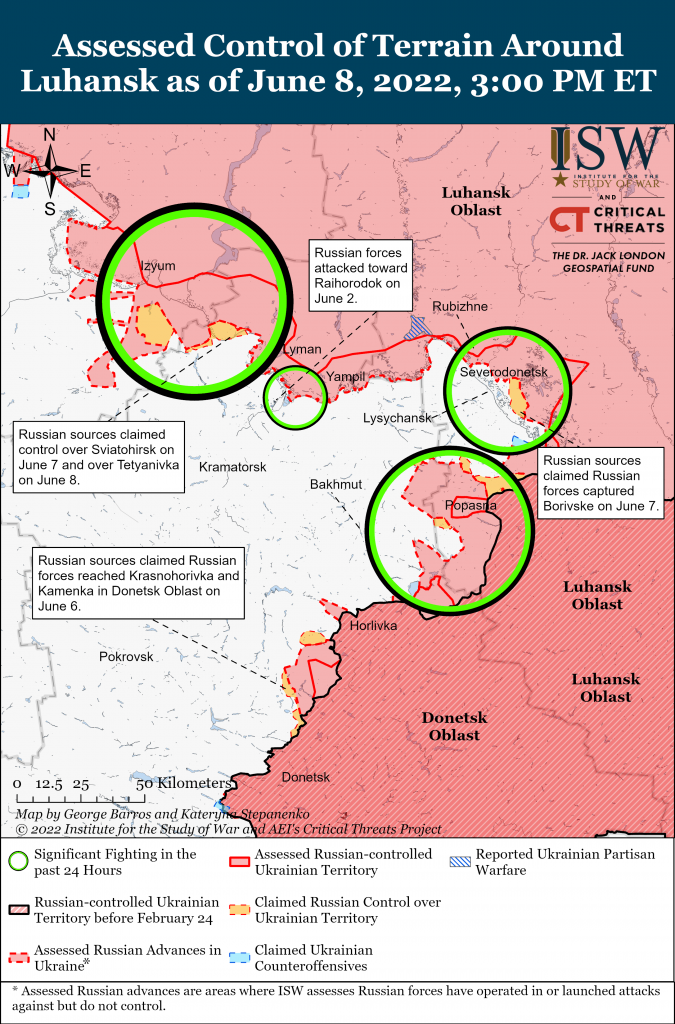 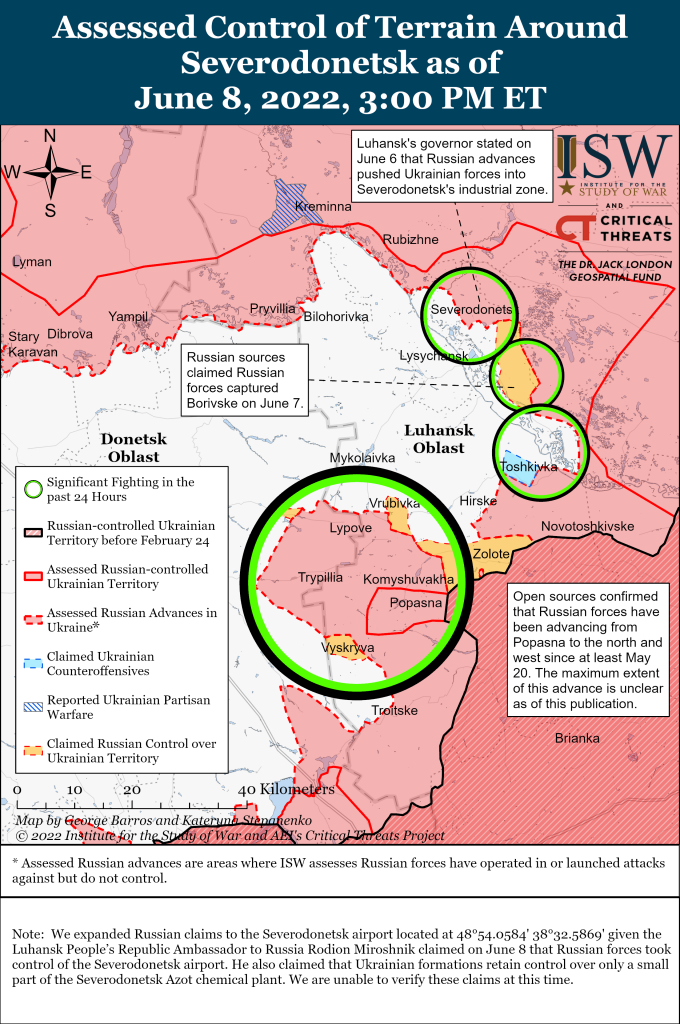 Russian forces continued efforts to gain control over the eastern outskirts of Severodonetsk on June 8. Luhansk Oblast Head Serhiy Haidai denied Chechen leader Ramzan Kadyrov’s claims that Russian forces have seized Severodonetsk and noted that street fighting is ongoing in the city.[vii] The Luhansk People’s Republic (LNR) Ambassador to Russia, Rodion Miroshnik, claimed that Russian forces took control over the Severodonetsk airport and stated that Ukrainian forces are continuing small-scale resistance at the Azot Chemical Plant on June 8, but ISW cannot independently verify these claims.[viii] Ukrainian forces are continuing to conduct a flexible defense of Severodonetsk and are likely focusing on inflicting high casualties on Russian personnel rather than seeking to hold the entire city. Haidai clarified previous reports from June 5-7 that Ukrainian forces regained half of Severodonetsk during a counterattack on June 5, but stated that they then withdrew to previous positions following Russian ground, artillery, and air strikes on June 6.[ix] The Ukrainian General Staff reported that Ukrainian defenders repelled Russian ground assaults on Toshkivka and Ustynivka (both within 20 km southeast of Severodonetsk) that sought to secure positions on the western Siverskyi Donets Riverbank.[x] Russian forces likely seek to advance up the west bank of the Siverskyi Donets River to avoid conducting a challenging opposed river crossing from Severodonetsk.

Russian forces continued offensive operations southeast of Izyum on June 8. Russian forces have advanced to Sviatohirsk (approximately 27 km southeast of Izyum), but it is unclear if Russian forces have entirely seized Sviatohirsk. Geolocated videos showed Ukrainian forces conducting artillery strikes and firing portable anti-tank systems against Russian heavy artillery in the eastern part of Sviatohisrk on June 6-7.[xvi] NASA FIRMS data observed significant high-temperature anomalies in western Sviatohirsk over the past 24 hours, likely indicating Russian indirect fire against remaining Ukrainian forces in the settlement. A Russian journalist reporting from an unspecified location in Sviatohirsk claimed that Russian forces will soon capture the entire city on June 8.[xvii] Russian Telegram Channel WarJournal [Z] shared drone footage of a destroyed bridge over the Siverskyi Donets River in Sviatohirsk connecting to the southeastern settlement of Tetyanivka and claimed that Ukrainian forces destroyed the bridge, but ISW cannot independently verify these claims.[xviii] Russian Telegram channel Swodki also claimed that Russian forces seized Tetyanivka on June 8, but this claim is likely incorrect as Russian forces reportedly continued to shell Tetyanivka throughout the day.[xix] Russian forces are likely attempting to secure Sviatohirsk to link up with other units advancing south from Izyum to further advance toward Slovyansk but may face Ukrainian resistance from the western Siverskyi Donets Riverbank. The Ukrainian General Staff reported that Russian forces are continuing to set conditions for offensive operations south of Izyum but did not launch ground assaults in the area.[xx] 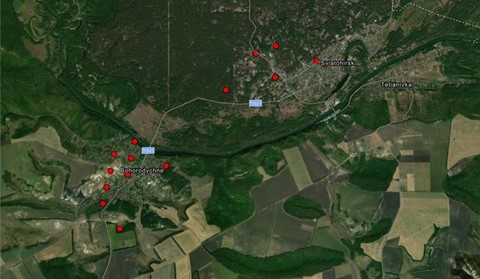 Russian forces attempted unsuccessful assaults south of Lyman in an effort to secure access to the western bank of the Siverskyi Donets River on June 8. The Ukrainian General Staff reported that Russian forces failed to advance to Raihorodok, approximately 12 km southwest of Lyman on the western Siverskyi Donets Riverbank, on June 8.[xxi] A drive on Raihorodok will support Russian efforts to reach Slovyansk, which is only 10 km from the settlement. 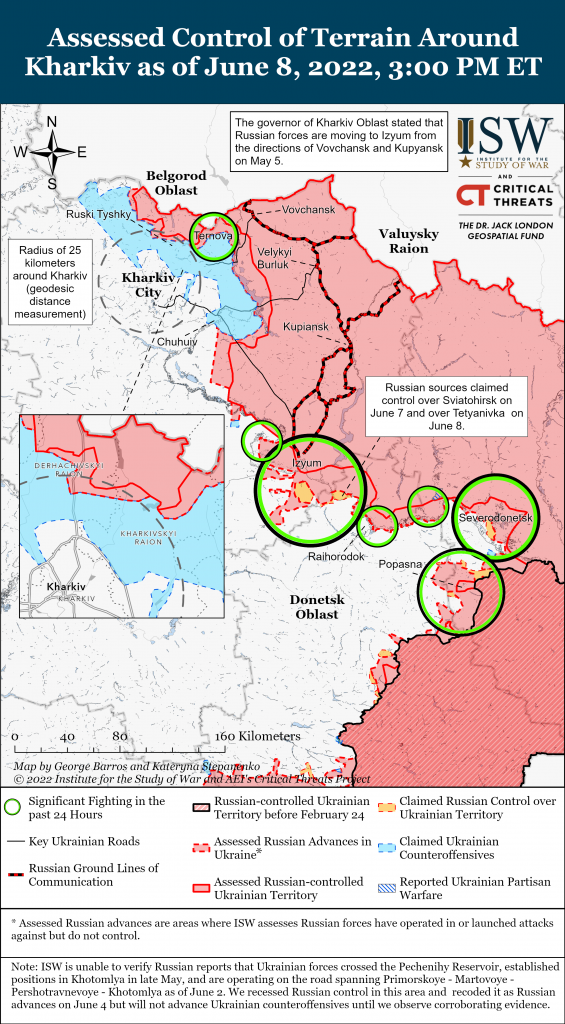 There were no significant changes on the Kharkiv front in the past 24 hours. Russian forces continued to hold their defensive lines north of Kharkiv City and conducted artillery and MLRS attacks on Kharkiv City and the surrounding settlements on June 8.[xxii] 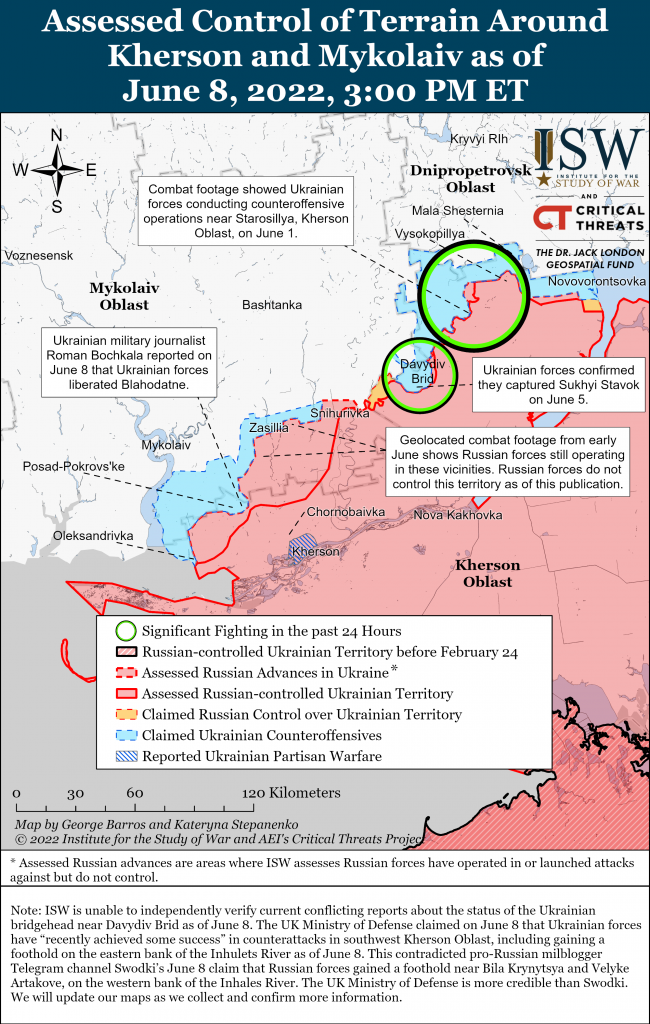 Russian forces concentrated their artillery fire and ground attacks in northeastern Zaporizhia near the Donetsk Oblast border on the Orikhiv-Huliapole line.[xxvi] Spokesperson for the Ukrainian Defense Ministry Oleksandr Motuzyanyk noted that Russian forces deployed 30 T-62 tanks to “long-term” (likely meaning defensive) firing points in Vasylivka, which is a likely attempt to strengthen control over the T0812 highway that runs from Vasylivka to Orikhiv and Huliapole.[xxvii] Russian forces additionally conducted MLRS attacks and reconnaissance operations in Mykolaiv Oblast.[xxviii]

Russian-backed occupation authorities continued to set political conditions for the integration of occupied Ukrainian territories on June 8. Ukraine’s Main Intelligence Directorate (GUR) reported that occupation authorities in Kherson Oblast are conducting fake “social polls” in order to set conditions for a “referendum” on accession into the Russian Federation.[xxix] According to the report, citizens of Kherson Oblast are receiving calls from unidentified actors that pose a series of manipulative and leading questions in order to sway their opinions on Russia, the war, the occupation, and Russian President Vladimir Putin. The GUR stated that the results of these manufactured “polls” will be used by occupation authorities to argue that Ukrainian citizens think favorably of Russia in order to make the case for annexation.

The Russian-appointed mayor of Melitopol, Galina Danilchenko, announced on June 8 that Melitopol is preparing for its own referendum on joining Russia.[xxx] The fact that a singular city, as opposed to an entire occupied region, is preparing for a referendum may indicate that occupied territories are pursuing ad hoc annexation and integration plans without a unifying occupational body to oversee the annexation of the entire region.

Occupation authorities of the Donetsk People’s Republic (DNR) continued to fail to provide the residents of Mariupol with basic social services or quality-of-life assurances. Advisor to the Mayor of Mariupol Petro Andryushchenko stated that DNR authorities are unable to provide water, humanitarian aid, or medical services to residents and that corruption amongst DNR collaborators is further complicating the situation.[xxxi] Head of the DNR Denis Pushilin stated that his priority is restoring the school system in Mariupol despite continual administrative failures to provide even the most basic food and water services.[xxxii] Pushilin additionally dismissed the chairman of the DNR‘s government on June 8, which is a likely indicator that DNR authorities have faced widespread internal challenges in efforts to occupy Mariupol and conduct the war as a whole.[xxxiii] ISW cannot currently assess the implications of this reported dismissal and will report further on any changes in the DNR’s governance structure.