Russian forces made marginal gains on the outskirts of Severodonetsk on June 18, but have largely stalled along other axes of advance. Russian troops are likely facing mounting losses and troop and equipment degradation that will complicate attempts to renew offensive operations on other critical locations as the slow battle for Severodonetsk continues. As ISW previously assessed, Russian forces will likely be able to seize Severodonetsk in the coming weeks, but at the cost of concentrating most of their available forces in this small area. Other Russian operations in eastern Ukrainesuch as efforts to capture Slovyansk and advance east of Bakhmut – have made little progress in the past two weeks. Russian forces are continuing to fight to push Ukrainian troops away from occupied frontiers north of Kharkiv City and along the Southern Axis, but have not made significant gains in doing so, thus leaving them vulnerable to Ukrainian counteroffensive and partisan pressure.

The Russian military continues to face challenges with the morale and discipline of its troops in Ukraine. The Ukrainian Main Intelligence Directorate released what it reported were intercepted phone calls on June 17 and 18 wherein Russian soldiers complained about frontline conditions, poor equipment, and overall lack of personnel.[i] One soldier claimed that units have been largely drained of personnel and stated that certain battalion tactical groups (BTGs) have only 10 to 15 troops remaining in service.[ii] 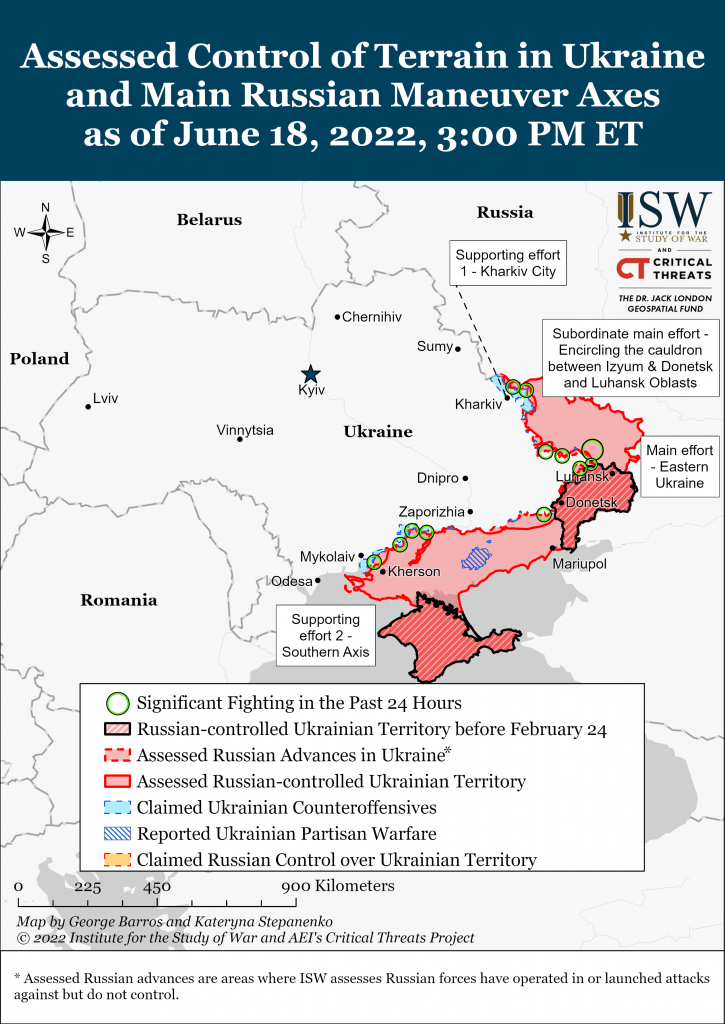 Russian forces continued to launch attacks towards Slovyansk from the southeast of Izyum on June 18 but did not make any confirmed advances.[vii] Fighting continued around Krasnopillya, a village along the E40 highway less than 20 kilometers northwest of Slovyansk.[viii] Russian troops exerted continual artillery fire on settlements southeast of Izyum and west of Lyman in order to set conditions for further attempts to advance on Slovyansk.[ix] Russian forces seek to capture Slovyansk to sever one of Ukraine’s lines of communications to Severodonetsk and Lysychansk, but are making only incremental progress towards the city.

Russian forces continued ground and artillery attacks east of Bakhmut in order to interdict Ukrainian lines of communication along the T1302 Bakhmut-Lysychansk highway on June 18.[x] Head of the Luhansk Regional State Administration Serhiy Haidai stated that Ukrainian forces repelled a Russian attack in Nyrkove, a settlement along the Luhansk-Donetsk Oblast border within 5 kilometers of the T1302 highway.[xi] Russian forces additionally conducted unsuccessful attacks against Hirske and Berestove, likely with the intent of interdicting Ukrainian lines of communication along the T1302 highway and complicating Ukrainian operations to support the Severodonetsk-Lysychansk area.[xii] 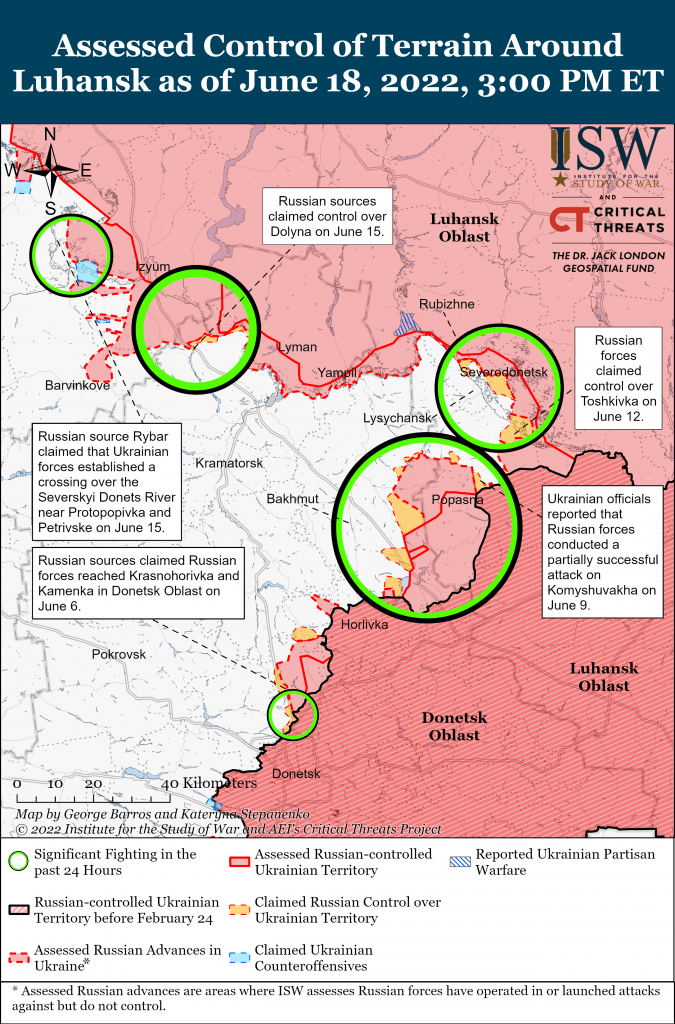 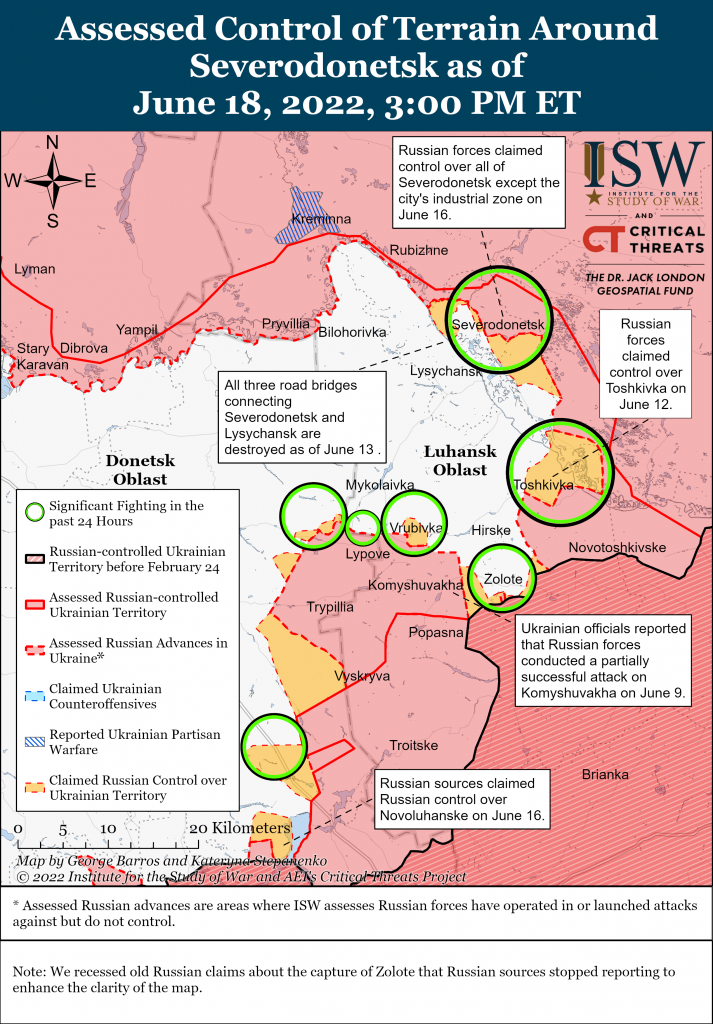 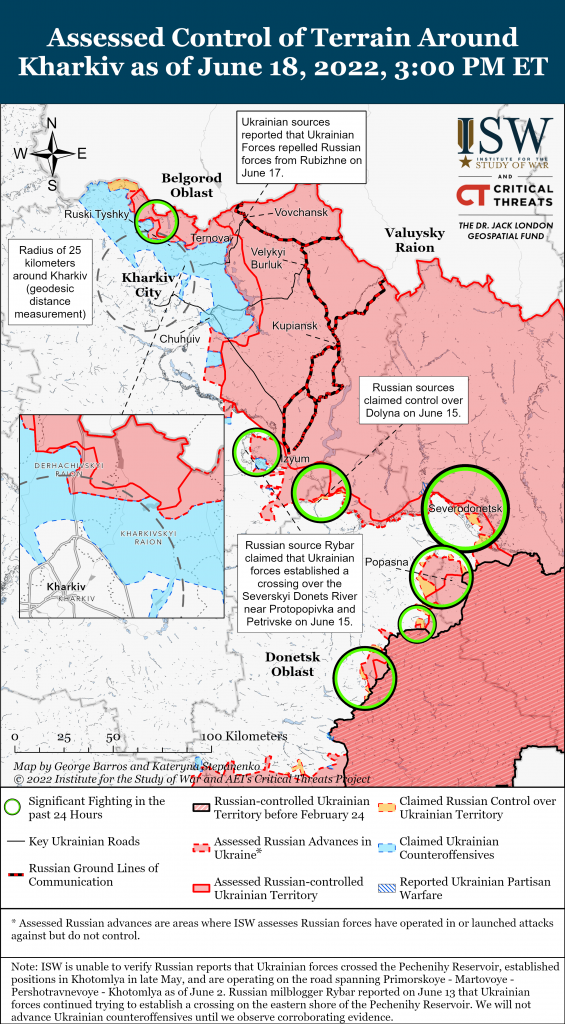 Russian forces fired on Ukrainian positions along the Southern Axis but did not make any confirmed attacks on June 18, a pause from the steady localized attacks of the past several weeks.[xvi] Russian forces continued efforts to improve engineering equipment along the Inhulets River.[xvii] A Russian Telegram channel noted that Russian forces launched massive, unspecified strikes along the Mykolaiv-Kherson Oblast border, likely in response to recent limited Ukrainian counterattacks in the area.[xviii] 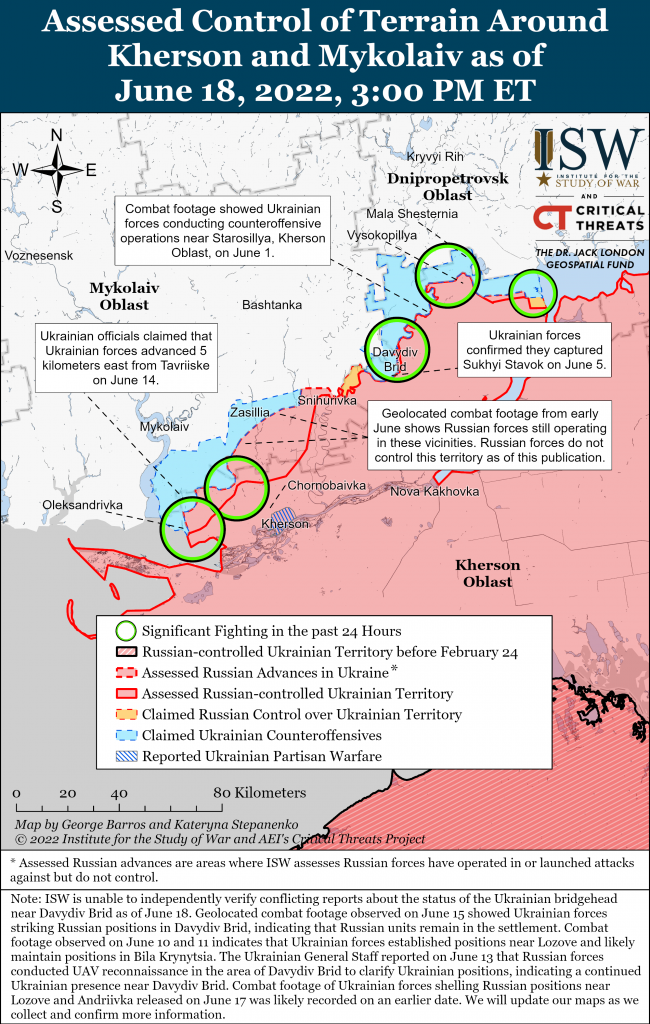