Kremlin-sponsored outlet Izvestia published and quickly removed an appeal by the First Deputy Head of the Russian Presidential Administration Sergey Kirelenko for Russia to rebuild the Donbas on June 12 and blamed hackers for what they (likely falsely) claimed was a “fake publication.” Izvestia likely intended to save the article for a later date to set informational conditions for Russian annexation of Donbas. Kirelenko’s appeal stated that Russia will restore the Donbas regardless of high costs or if doing so lowers the standard of living in Russia.[1] Izvestia blamed unknown hackers for publishing a “fake article,” but it is possible that hackers instead released an article Izvestia had prepared to publish at a later date. The Kremlin previously published and removed an article prematurely celebrating a Russian victory over Ukraine in late February and discussing the capture of Ukraine in past tense in anticipation of Ukraine’s capitulation during the first Russian-Ukrainian negotiations in Belarus.[2] Unnamed Kremlin officials previously identified Kirelenko as the future head of a new Russian federal district, which would encompass Donbas, and occupied settlements in Kherson and Zaporizhia Oblasts.[3]

Russia continues to deploy insufficiently prepared volunteer and reserve forces to reinforce its ongoing operations. Kremlin-sponsored outlet Izvestia released footage showing Russian artillery reservists undergoing training with old D-20 howitzers reportedly within 10 days of their deployment to Ukraine.[4] The reservists focused on learning how to operate hand-held weapons, despite being reportedly only days away from deploying. Social media footage also showed Russian forces transporting Russian volunteer and reserve units with T-80BV tanks (a variant produced in 1985, as opposed to the modernized T-80 BVM operated by the 1st Guards Tank Army) and BMP-1 armored personnel carriers (which have largely been phased out in favor of the BMP-2) to Belgorod Oblast on June 9.[5] Additional social media footage showed Russian forces transporting T-80BV tanks removed from storage in Moscow Oblast on June 9.[6] 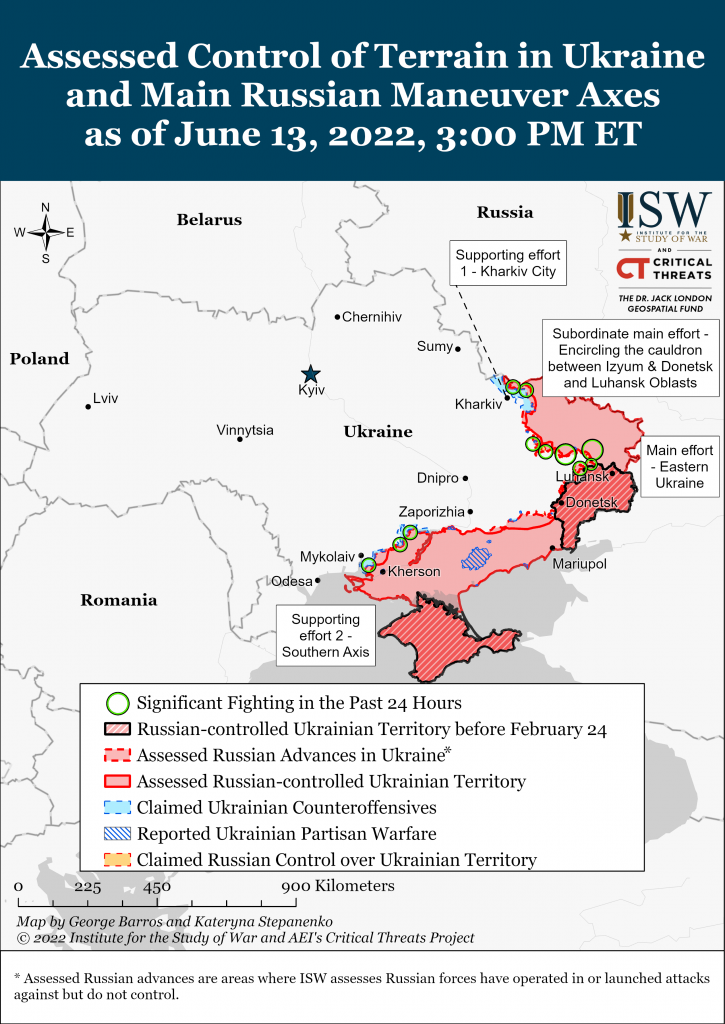 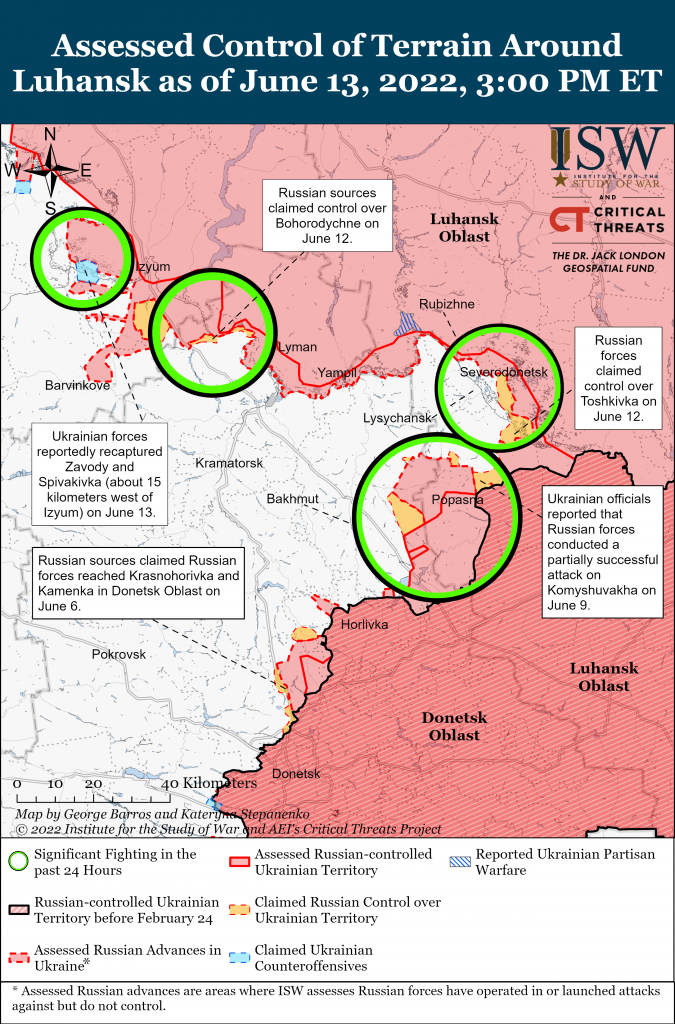 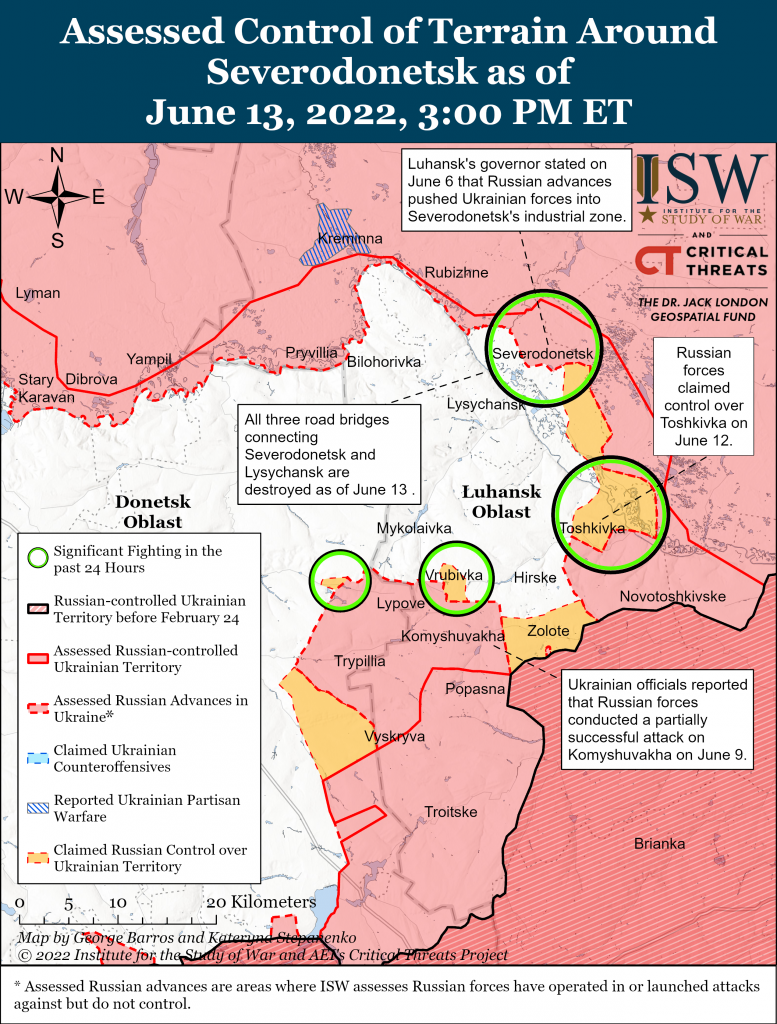 Russian forces launched unsuccessful offensive operations southeast of Izyum and in settlements north of Slovyansk but did not resume assaults in the Lyman area on June 13. The Ukrainian General Staff reported that Russian forces attacked Bohorodychne, approximately 25km southeast of Izyum, but only secured the northwestern outskirts of the settlement.[19] Russian forces also launched an unsuccessful assault on Dolyna, a settlement along the E40 highway to Slovyansk.[20] Ukrainian military journalist Andriy Tsaplienko reported that Ukrainian forces are conducting counteroffensives just west of Izyum and have liberated Zavody and Spivakivka, but Ukrainian officials did not confirm this report.[21] Russian forces are likely continuing their preparations to cut off Ukrainian GLOCs to Lysychansk from Siversk and the northwest. Russian forces reportedly shelled Maiaky (just five kilometers northeast of Siversk) and transferred up to 80 units of military and artillery equipment to Kreminna and Starobilsk.[22] LNR Ambassador to Russia Rodion Miroshnik claimed that Russian forces will likely simultaneously attack Lysychansk and Siversk to block Ukrainian forces from retreating to Slovyansk.[23] Russian forces likely seek to set conditions for direct assaults against Siversk and settlements northwest of Lysychansk in the next two weeks.

Russian forces did not conduct any offensive operations east or west of Avdiivka on June 13 and continued to shell surrounding settlements.[24] Ukraine’s Joint Forces Task Force reported liberating three unnamed settlements and pushing back the line of contact by 15km in Donetsk Oblast, though ISW cannot independently verify this claim.[25] 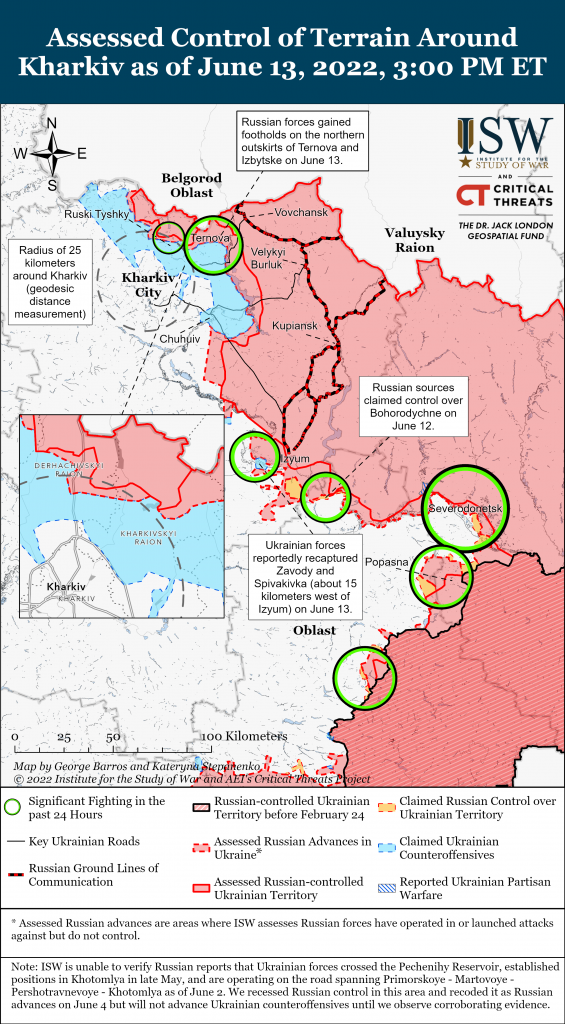 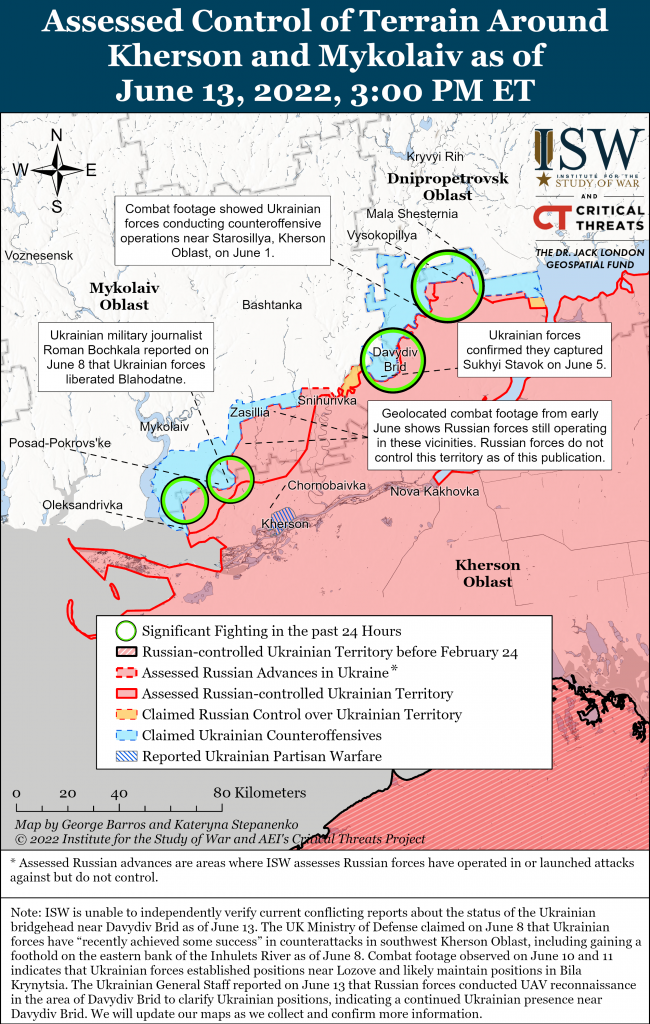 Ukrainian forces reportedly continued to gradually attack Russian positions on the eastern bank of Inhulets River in northwestern Kherson Oblast. The Ukrainian Southern Operational Command noted that Ukrainian and Russian forces engaged in heavy fighting in the Davydiv Brid area, an operationally significant settlement situated on the eastern Inhulets riverbank and on Russian ground lines of communication (GLOCs) along the T2207 highway.[30] The Ukrainian General Staff reported that Russian forces conducted aerial reconnaissance over Davydiv Brid, but the scope of Ukrainian advances in the settlement remains unclear.[31] Russian forces continued to fortify their positions and reportedly strengthened the grouping of troops in areas near the Dnipropetrovsk-Kherson Oblast border.[32]

Russian authorities may have staged false flag attacks in Melitopol and Berdyansk on June 12, likely to accuse Ukrainian partisans of targeting civilians. Self-proclaimed head of the Zaporizhia Oblast Military-Civilian Administration Vladimir Rogov made a preliminary announcement that “terrorists” staged three explosions in Berdyansk, before retracting his statements and identifying the situation as an accident at the electrical station.[34] Rogov falsely maintained that Berdyansk residents attribute any emergency in the city to Ukrainian efforts to disturb peaceful life in “liberated” (Russian-occupied) regions. Self-proclaimed deputy head of the Zaporizhia Oblast Internal Affairs Ministry Alexei Selivanov also claimed that unknown assailants planted an explosive device in Melitopol to disrupt Russia Day (the day of adoption of the declaration of Russian state sovereignty after the collapse of the Soviet Union).[35] Zaporizhia Oblast Military Administration Head Oleksandr Starukh noted that Ukrainian authorities warned that Russian forces could stage terrorist activity prior to Russia Day.[36]

Russian occupation authorities continue to introduce new titles for personnel that agreed to cooperate with the Kremlin and its proxies. The Donetsk People’s Republic Head (DNR) Denis Pushilin appointed previous Ukrainian Mayor of Sviatohirsk Vladimir Bandura as the new Sviatohirsk Administration Head after Bandura agreed to cooperate with Russian forces.[42] Russian occupation authorities have seemingly eliminated the position of mayor in occupied settlements, likely to fully institute their own governance structures rather than taking over existing structures.

Russian occupation authorities are continuing to exploit Ukrainian agrobusiness and have reportedly banned the export of crops to Ukrainian government-controlled territories from Russian occupied settlements.[43] The GUR also noted that Russian forces are coercing Kherson Oblast businessmen and farmers to hand over 70% of their harvest to Crimean buyers at low profit margins.