Russian forces are likely prioritizing offensive operations toward Bakhmut and around Donetsk City at the expense of efforts to take Siversk and Slovyansk. Russian commanders are likely seeking to exploit recent gains in the Novoluhanske area to pressure Bakhmut from the east. Their efforts around Donetsk City likely aim to push Ukrainian forces out of artillery range of the city. They may also be intended to gain as much ground in Donetsk Oblast as possible before planned referenda in September. Russian offensive operations are very unlikely to take Bakhmut, which is large and well-defended, or to make dramatic gains west of Donetsk City even if they manage to take the towns of Avdiivka and Pisky that have held out against their pressure since the original Russian invasion in 2014. Fighting in these areas will likely intensify, however, and Ukrainian President Volodymyr Zelensky is calling on residents to evacuate.[1]

Neither Russia nor Ukraine produced new evidence regarding the cause or responsibility for the deaths of Ukrainian prisoners of war (POWs) at the Olenivka prison in occupied Donetsk Oblast. Russian officials raised the death toll of the event to 50 and released a list of deceased POWs.[2] Ukrainian officials stated that they are unable to verify the list at this time and called for an international investigation.[3] Maxar has provided post-strike imagery of the damage. ISW is unable to confirm the nature or cause of the incident, although it remains more likely that Russian forces were responsible. 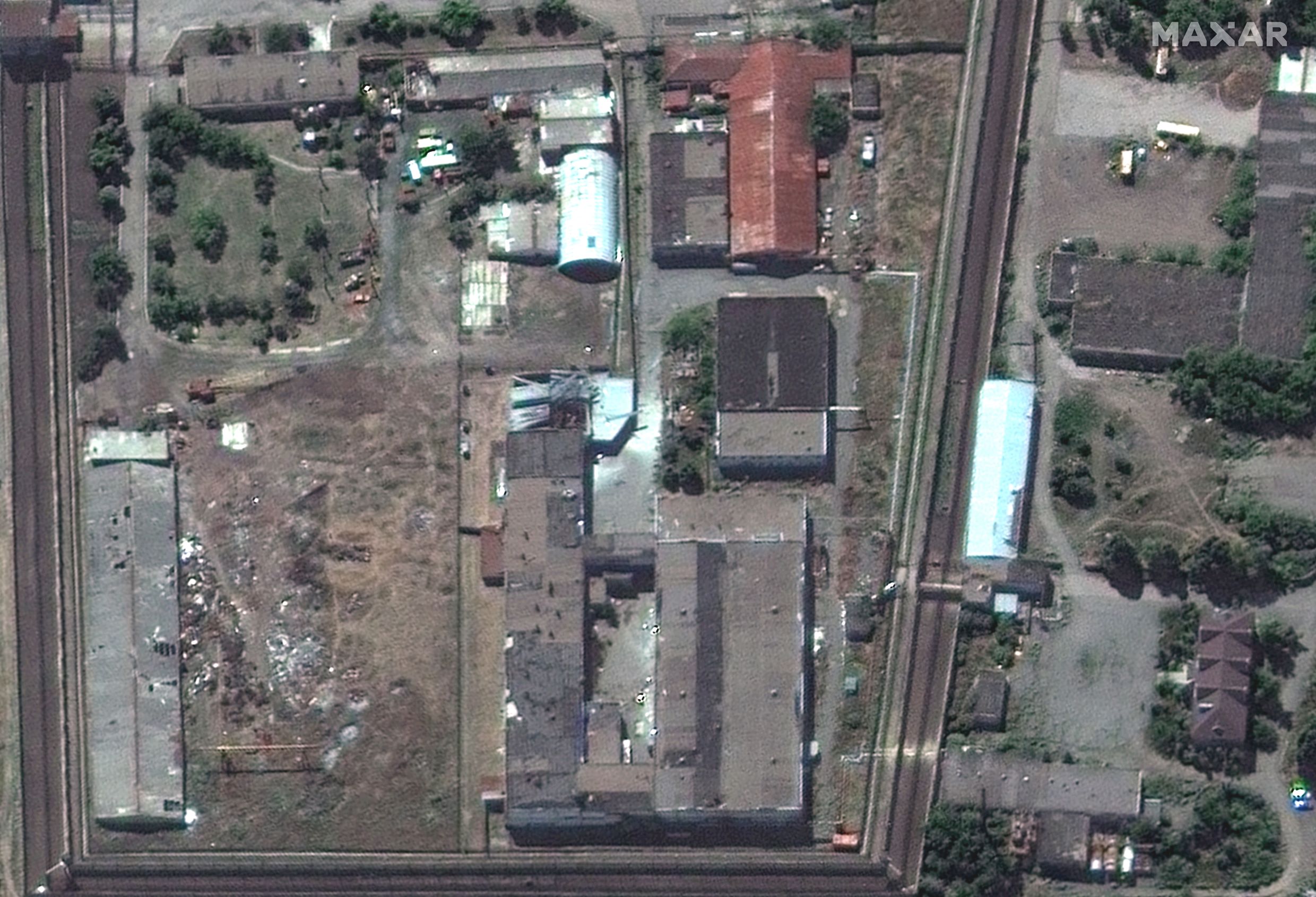 Russian forces resumed offensive operations southwest of Izyum and began accumulating military equipment in Belgorod Oblast, just east of the Russian ground lines of communication (GLOCs) to Izyum. The Ukrainian General Staff reported that Russian forces unsuccessfully launched assaults on Brazhivka and Dmytrivka, approximately 16 and 18km southwest of Izyum respectively, on July 30.[4] Geolocated footage also showed Ukrainian forces striking an advancing Russian tank in Brazhivka with an anti-tank guided missile on an unspecified date.[5] Geolocated satellite imagery showed a Russian military buildup between June 19 and July 28 in Urazovo, Belgorod Oblast, 12km east of the international border.[6] Russian forces may be increasing military equipment in the area to support westward advances from Izyum, as the buildup is only 55km northeast of Russian GLOCs in Kupyansk that connect to both Izyum and settlements south of Kharkiv City. Russian forces have recently launched several localized attacks northwest of the current Izyum-Slovyansk line, and ground assaults southwest of the line alongside military buildup may support a westward offensive operation.[7] 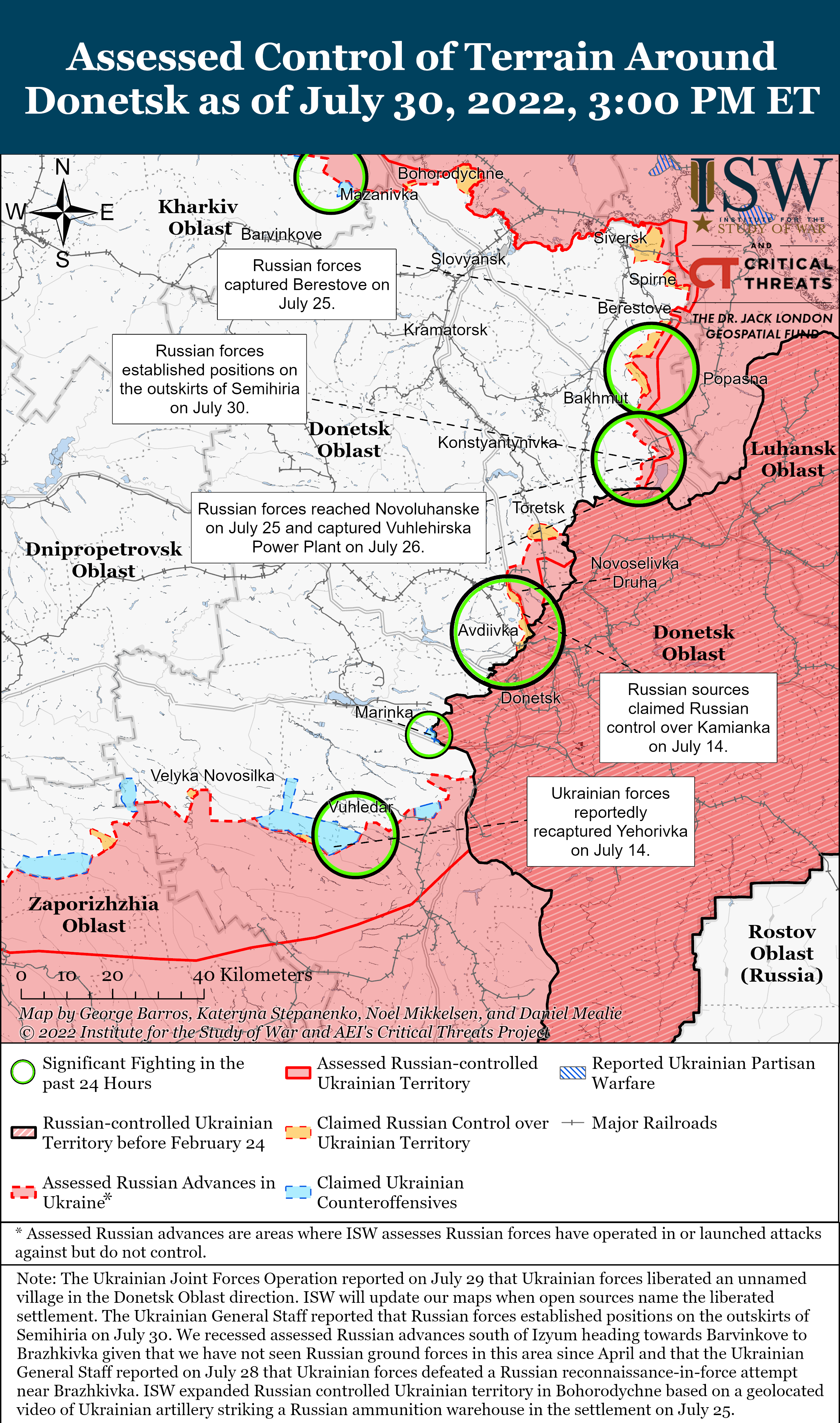 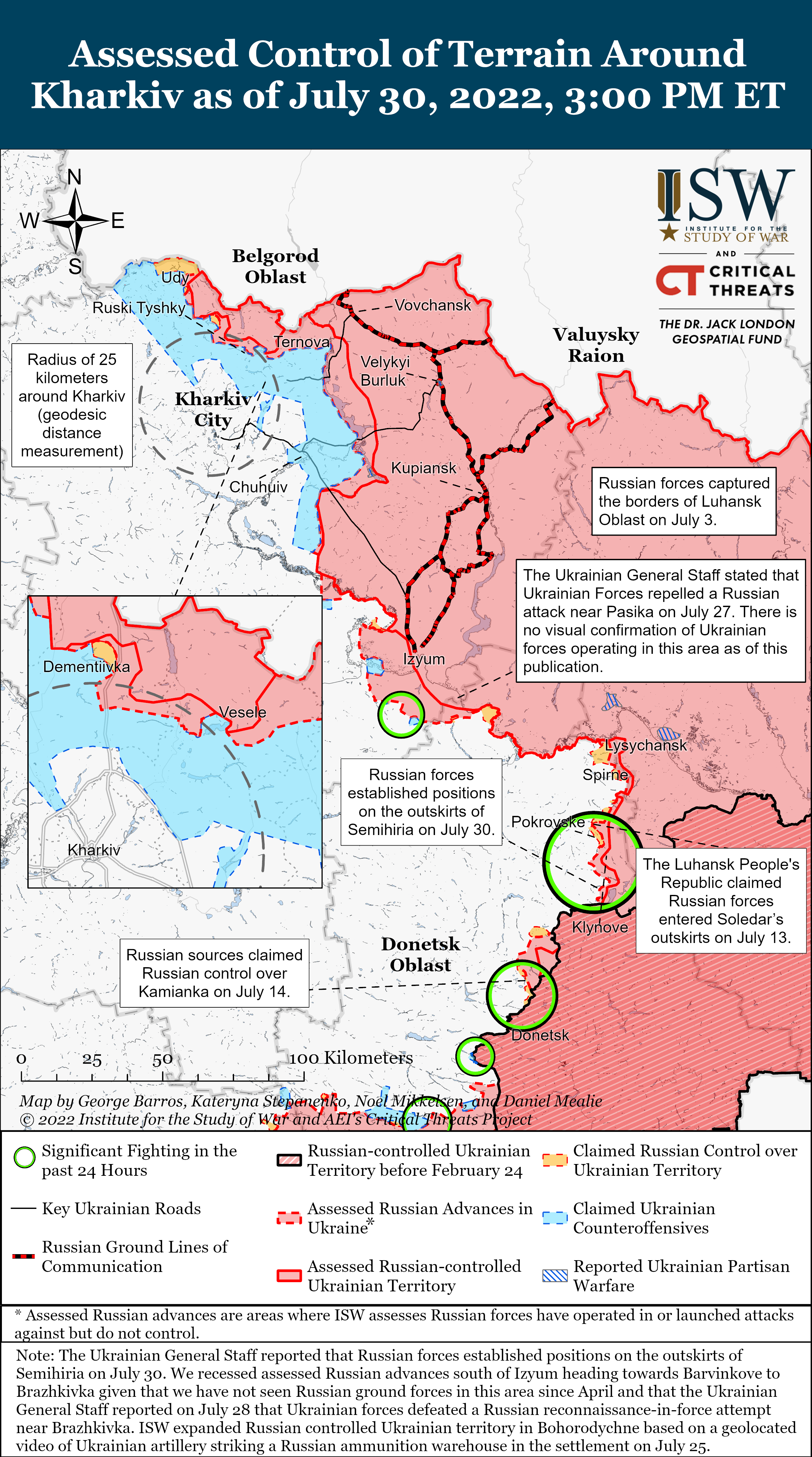 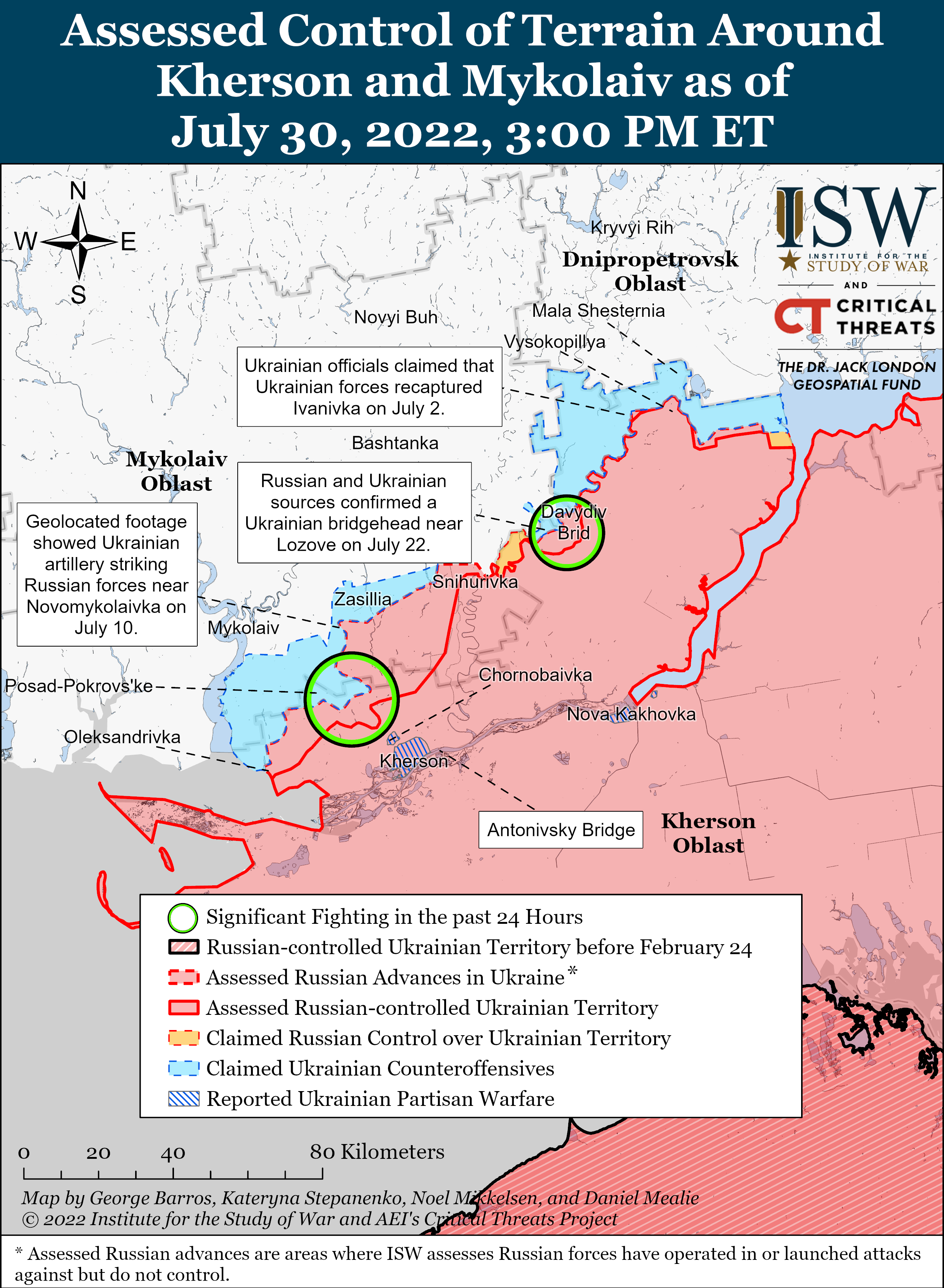 Nothing significant to report as of July 30.

Russian occupation authorities carried out the scheduled “We Are Together With Russia” forum in Kherson State University on July 30, continuing to set conditions for a falsified referendum in occupied areas of Kherson Oblast.[30] Pro-Russian Telegram channel “Readovka” described the event as a forum aimed to allow participants to “the future fate” of Kherson Oblast and claimed that about a thousand participants gathered to discuss social and economic policies of the region.[31] The delegates voted for a declaration called “Russian Kherson“ regarding the joint development of Kherson Oblast with Russia.[32] Igor Kastyukevich , Russian State Duma Deputy and coordinator of the United Russia Party humanitarian mission to Kherson Oblast, was the only Russian identified as participating in the forum alongside Ukrainian collaborators.[33] ISW previously assessed that that low turnout among Russian officials could support other reporting suggesting that the Kremlin authorities fled Kherson City in fear of Ukrainian counteroffensives.[34] Russian-appointed Kherson Oblast Military-Civilian Administration Head Volodymyr Saldo also announced the creation of the Kherson Oblast Public Chamber within the ”We Are Together With Russia,” which the Kremlin will likely use to create the facade of public support for Kherson Oblast’s integration with Russia.[35]