Russian President Vladimir Putin submitted a bill setting conditions for further institutionalized corruption in Russia through domestic legislative manipulations. Putin submitted a bill to the Russian State Duma on January 9 denouncing the Council of Europe’s Criminal Law Convention on Corruption and withdrawing Russia from the Group of States against Corruption (GRECO).[6] Putin submitted the bill on the grounds that the Council of Europe terminated Russia’s GRECO membership, thus removing Russia’s ability to vote but requiring them to cooperate on several obligations.[7] Kremlin spokesperson Dmitry Peskov claimed that this move does not undermine Russian legislative capacity to fight corruption and emphasized that corruption has not been eradicated anywhere in the world.[8] ISW has previously reported on Putin’s efforts to institutionalize corruption through various legal manipulations, and Russia’s discontinued membership in GRECO would likely serve as another means by which Putin can institute legislation supporting and enabling corrupt practices without facing international legal mechanisms to hold him to account.[9]

Russian Security Council Deputy Chairperson Dmitry Medvedev likely gauged the willingness of the Russian information space to accept increased censorship of opposition voices in a Telegram message on January 8. Medvedev posted a message on Telegram on January 8 which he framed as a response to discussions in the Russian information space about “traitors who have gone over to the enemy.” Medvedev stated that a serious conversation began “between the bosses” (likely in reference to Russian leadership) on whether to respond with rule of law or with justice.[10] Medvedev noted that “quiet groups of impeccably inconspicuous people” operated in Russia to enforce “special rules of wartime” during World War II with great success, likely alluding to internal censorship.[11] Some Russian milbloggers appeared to understand Medvedev’s implied censorship and agreed, noting that Soviet security and counterintelligence organizations were highly effective at censorship and that “ideological people” are willing to assist these efforts.[12] Russian President Vladimir Putin and the Kremlin have recently intensified efforts to promote self-censorship amongst milbloggers and coopt several of them, as ISW has previously reported. The response to Medvedev's statements by several milbloggers may indicate that these Kremlin efforts to impose self-censorship are reaching their desired audience.[13] 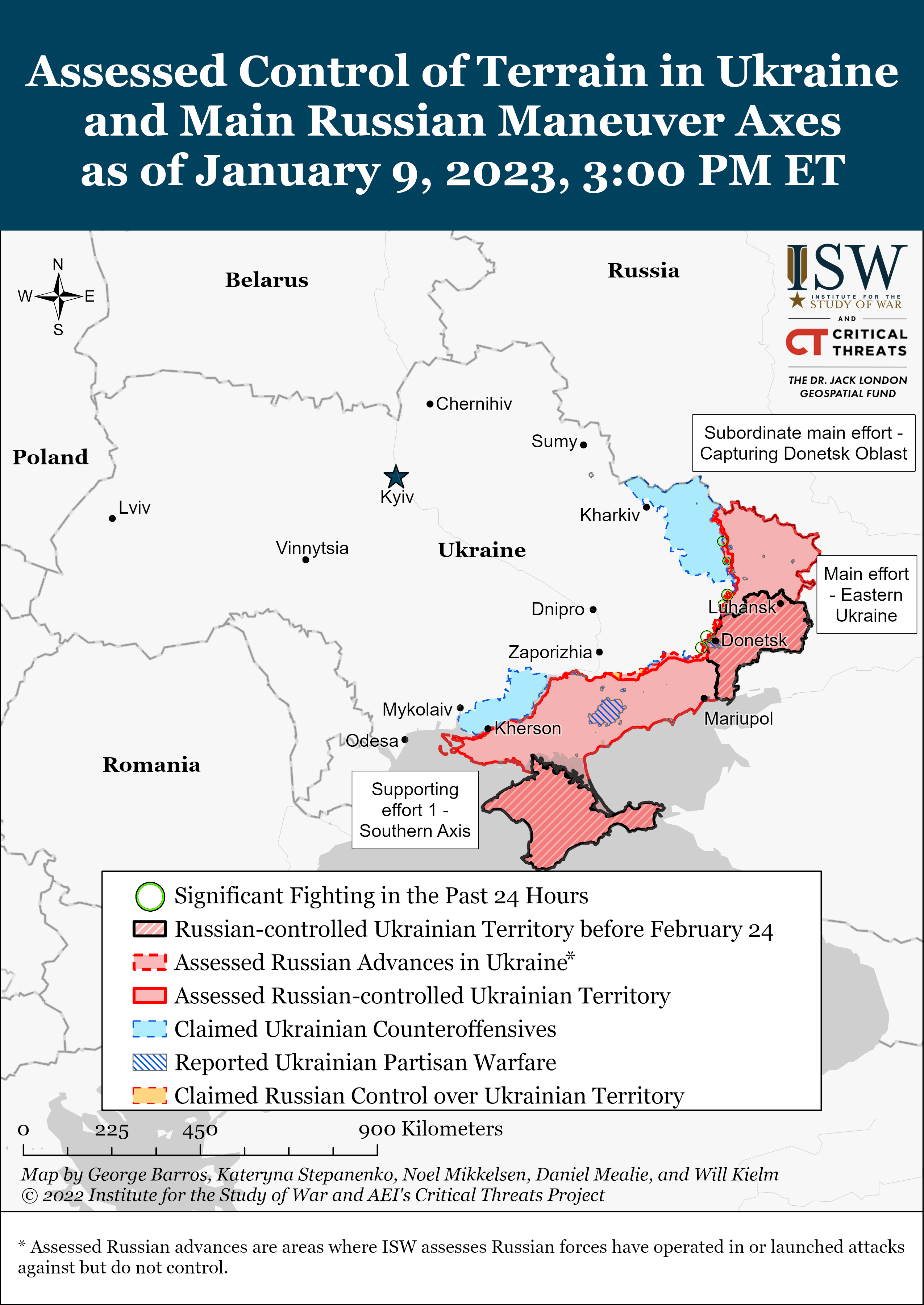 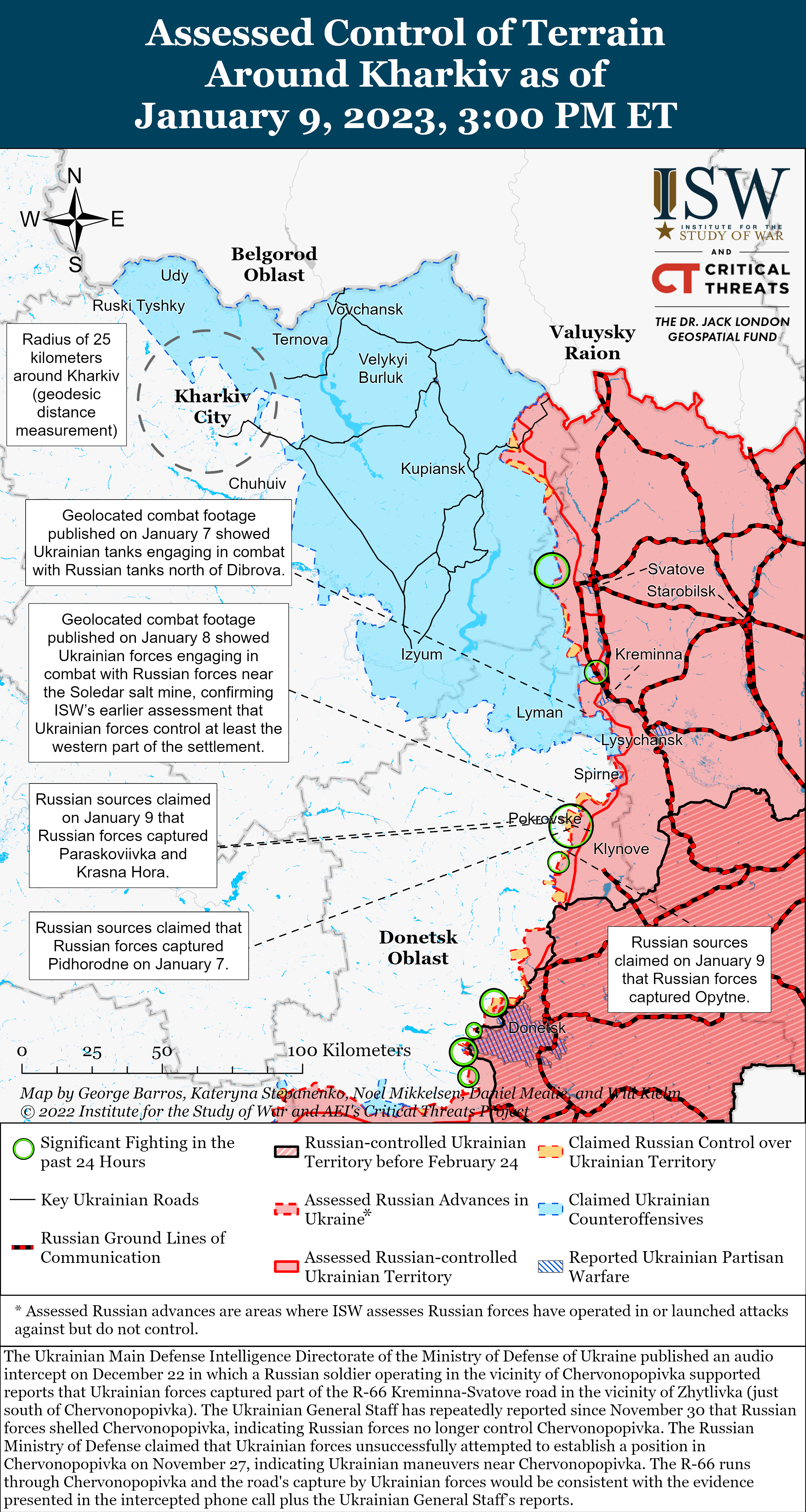 Russian forces continued ground attacks in and around Soledar on January 8 and 9. Ukrainian defense officials reiterated that while Russian forces do not fully control Soledar, the situation in the settlement is extremely difficult and Wagner Group personnel are advancing in certain areas.[24] Russian milbloggers claimed that Wagner Group forces are fighting in central Soledar, and footage posted on January 9 shows intense small arms exchanges near the Soledar administration building.[25] A Russian milblogger noted that Ukrainian troops maintain control of the Artyomsol enterprise and surrounding high-rise buildings in northern Soledar.[26] Russian sources additionally claimed that Russian forces took control of Bakhmutske (just southeast of Soledar), Krasna Hora, and Paraskoviivka (just southwest of Soledar); and that battles are ongoing in Berkhovka (10km southwest of Soledar along the E40 Bakhmut-Slovyansk highway), although ISW has not observed visual confirmation of these Russian claims.[27] The Ukrainian General Staff noted that Ukrainian troops repelled Russian attacks on Soledar, Krasna Hora, Pidhorodne, and Rozdolivka between January 8 and 9.[28]

Russian forces continued ground attacks along the western outskirts of Donetsk City on January 8 and 9. The Ukrainian General Staff reported Russian attacks near Vodiane, Pervomaiske, and Krasnohorivka on the northwestern outskirts of Donetsk City and near Marinka, Pobieda, and Novomykhailivka on the southwestern outskirts between January 8 and 9.[32] A Russian milblogger also reported fighting in these areas.[33] The Donetsk People’s Republic (DNR) People’s Militia posted footage on January 9 of the 5th DNR Brigade firing incendiary munitions at a Ukrainian force concentration in Marinka.[34] The 1980 Protocol III on Incendiary Weapons of the Convention on Certain Conventional Weapons restricts use of incendiary weapons as a means or method of warfare during armed conflict.[35] 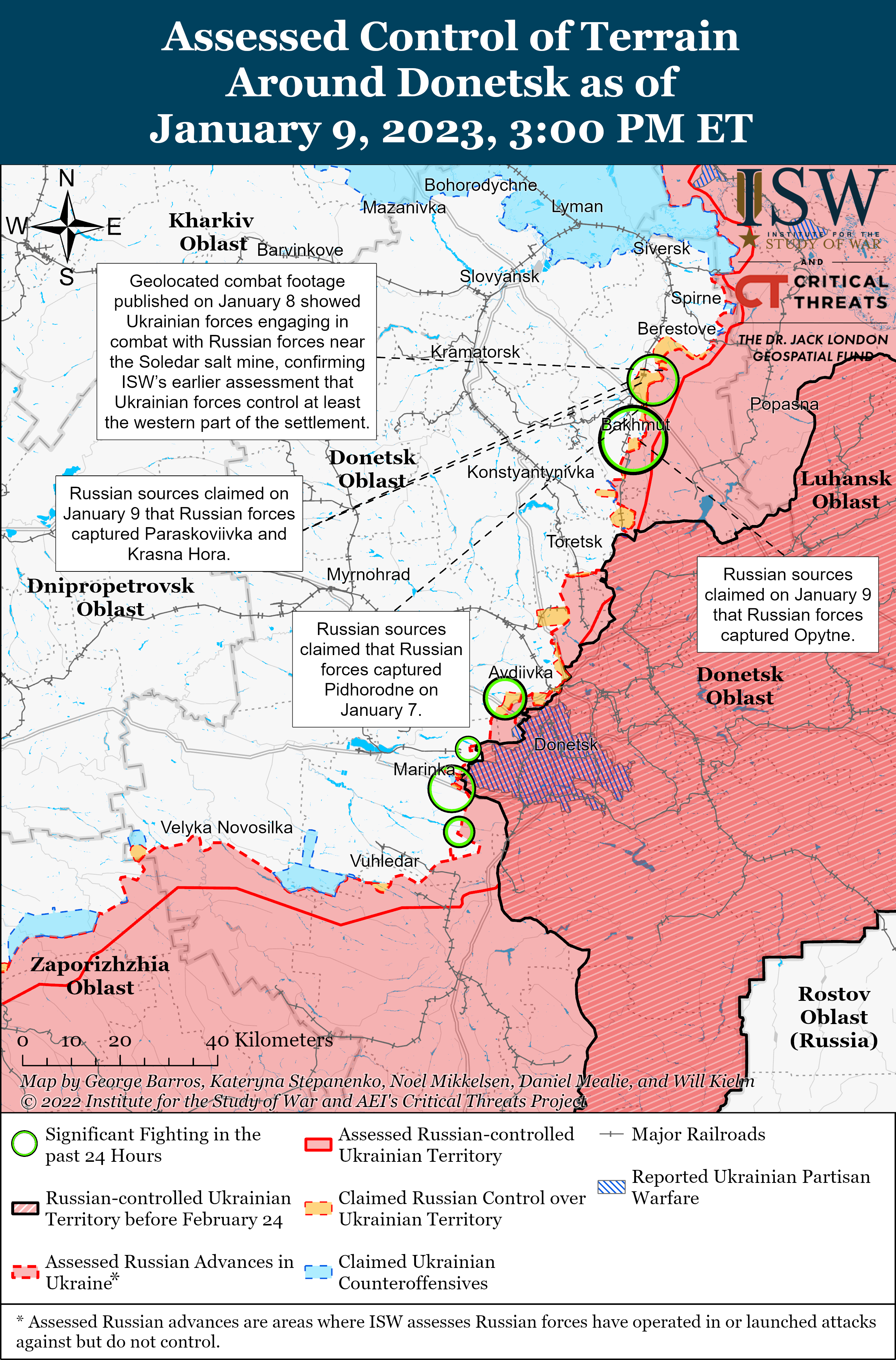 Russian forces continued to construct defensive fortifications and transport military equipment in Zaporizhia Oblast on January 8 and 9 amid continued concerns over a possible Ukrainian counteroffensive in the area. Ukrainian Mayor of Melitopol Ivan Fedorov stated on January 9 that Russian forces continue to build defensive fortifications southwest of Melitopol towards Crimea, including dragon’s teeth anti-tank fortifications on the E105 Melitopol-Dzhankoy highway between Vovchanske and Chervone, and trenches along the Kakhovskyi Canal that runs between Kakhovka, Kherson Oblast and Novohryhorivka, Zaporizhia Oblast.[44] An image posted on January 8 shows a Russian train transporting tanks in an unspecified direction near Melitopol.[45] Zaporizhia Oblast occupation official Vladimir Rogov claimed that Ukrainian authorities purposefully lowered the water level in the Kakhovka Reservoir, which Rogov claimed indicates Ukrainian forces are preparing to cross the reservoir and may land near Enerhodar.[46] Rogov also claimed on January 9 that Ukrainian forces significantly increased their rate of shelling along the Zaporizhia Oblast frontline in the past 24 hours.[47]

Russian forces continued routine fire against areas in Zaporizhia, Mykolaiv, and Dnipropetrovsk oblasts on January 8 and 9.[52] 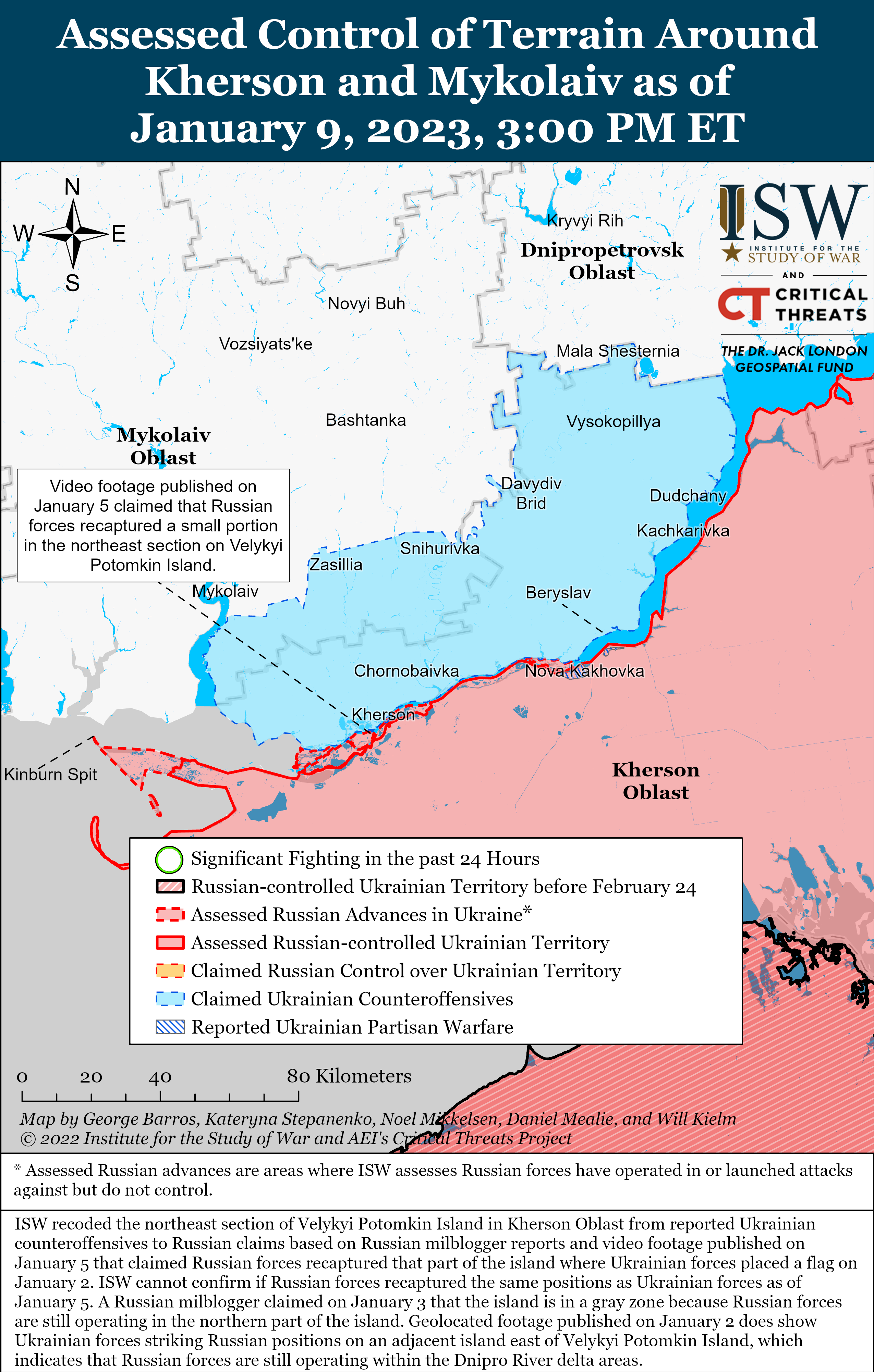 Russia’s systematic force-generation failures continue to have ramifications for Russian offensive capacity. The Russian information space circulated a video recorded by Russian troops from Belgorod Oblast addressed to Russian President Vladimir Putin and Russian MoD leadership detailing how they trained as artillerymen but were sent to the frontlines in Ukraine as infantrymen under the 1st Army Corps (the forces of the Donetsk People’s Republic) and used as cannon fodder.[58] A Russian milblogger amplified the video to criticize the transfer of artillerymen of the 568th Howitzer Artillery Battalion, which is now subordinate to the 1st Army Corps, to the infantry.[59] Another Russian milblogger reposted a statement from a Russian artillery officer who claimed that Putin is trying to create new artillery units, but the officer is unsure where Putin will get the personnel for these units because Russian military leadership keeps sending trained artillerymen to fight as infantrymen.[60] ISW previously reported that the Russian military deployed personnel trained as artillerymen and tankers to infantry divisions in Ukraine with no formal infantry training, likely to the detriment of the overall combat capabilities of such units.[61]

Russian leadership may be planning to reduce previously promised compensation for Russian servicemembers wounded in action. A Russian Telegram channel, citing internal sources, claimed on January 8 that Russian leadership is considering the possibility of limiting compensation payments to only Russian personnel who incurred major injuries such as loss of limbs while fighting in Ukraine.[62] The posts claims that this change would be unofficial and is likely already occurring as there has been an uptick in reports of headquarters “losing” the required proof of injury documents that would enable the injured to receive payments.[63]

ISW will continue to report daily observed indicators consistent with the current assessed most dangerous course of action (MDCOA): a renewed invasion of northern Ukraine possibly aimed at Kyiv.

ISW’s December 15 MDCOA warning forecast about a potential Russian offensive against northern Ukraine in winter 2023 remains a worst-case scenario within the forecast cone. ISW currently assesses the risk of a Russian invasion of Ukraine from Belarus as low, but possible, and the risk of Belarusian direct involvement as very low. This new section in the daily update is not in itself a forecast or assessment. It lays out the daily observed indicators we are using to refine our assessments and forecasts, which we expect to update regularly. Our assessment that the MDCOA remains unlikely has not changed. We will update this header if the assessment changes.

Observed indicators for the MDCOA in the past 24 hours:

Observed ambiguous indicators for MDCOA in the past 24 hours: