The Kremlin continues to falsely claim that Ukraine poses an existential threat to Russia to reject Ukrainian offers of a peace summit and retain Putin’s original maximalist goals. Russian Permanent Representative to the United Nations Security Council Vassily Nebenzya responded to Ukrainian proposals for a peace summit on January 13 with a series of false claims framing Ukraine as an aggressor that was, ludicrously, “about to attack Moscow.”[5] Nebenzya stated that Russia’s war in Ukraine will only end “when the threat to Russia no longer comes from the territory of Ukraine” and when “the discrimination [against] the Russian-speaking population” in Ukraine ends.[6] Kremlin claims of discrimination against Russian speakers in Ukraine are a longstanding information operation seeking to justify Russia’s invasion of Ukraine.[7] Nebenzya reiterated the Kremlin’s narrative that Ukraine’s refusal to recognize Russia’s illegal annexation of occupied Ukrainian territories and relationships with the West threaten Russia and claimed that Ukrainian ties with the West (rather than Russia’s invasion and occupation of Ukraine) undermined Ukraine’s sovereignty and cultural identity.[8] Nebenzya claimed Ukraine is not interested in negotiations and is no more than a NATO paramilitary company—both longstanding claims that the Kremlin intends to delegitimize Ukraine as an independent actor and shift the responsibility for negotiations onto Western officials, who the Kremlin likely believes Russia can pressure into preemptive concessions.[9] Nebenzya asserted that if the Kremlin cannot achieve its maximalist goals through negotiations, it will achieve them through military means.[10] Nebenzya’s speech again demonstrates that the Kremlin has not abandoned its maximalist goals in Ukraine, false justifications for its unprovoked war of aggression, and will seek to coerce the West to negotiate over Ukraine’s head.[11] 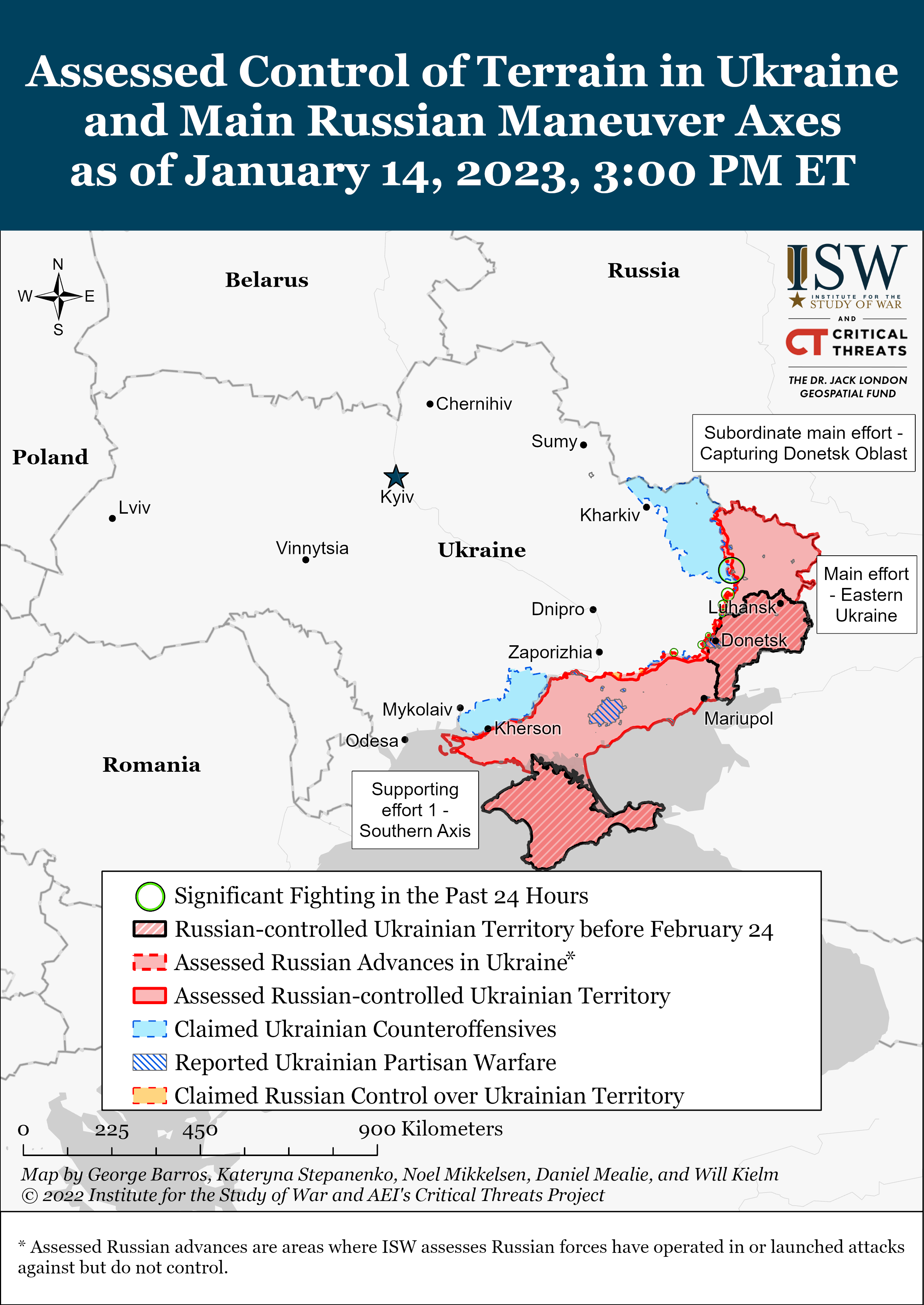 Russian forces continued offensive operations around Bakhmut on January 14. The Ukrainian General Staff reported that Ukrainian forces repelled Russian assaults near Bakhmut itself and near Klishchiivka (7km southwest of Bakhmut) and Mayorsk (22km southwest of Bakhmut).[37] A Russian source posted footage on January 12 showing the commander of the Akhmat Kadyrov Special Purpose Police Regiment, Zamid Chalaev, denying rumors that he surrendered near Bakhmut.[38] The State Border Service of Ukraine reported on January 14 that Ukrainian forces eliminated Wagner Group assault personnel in Bakhmut and repelled continued Wagner Group attempts to reach the outskirts of the settlement.[39] One Russian milblogger claimed that Wagner Group fighters are abandoning head-on attacks against Bakhmut and instead are trying to encircle the settlement.[40] The Russian milblogger claimed that Russian forces conducted an assault in the direction of Dyliivka (15km southwest of Bakhmut) and that Wagner Group fighters conducted assaults near Klishchivka as well as in the direction of Predtechyne (15km southwest of Bakhmut), attempting to cut off a section of the H-32 highway between Bakhmut and Kostiantynivka.[41]

Russian forces continued defensive operations and reinforcement efforts on the east (left) bank of the Dnipro River on January 14. The Ukrainian General Staff and several Ukrainian officials reported the movement of Russian personnel, weapons, military, equipment, and ammunition as Russian forces redeploy units and concentrate forces to strengthen defensive capabilities along the southern axis.[47] Kherson Oblast occupation administration head Vladimir Saldo claimed on January 14 that Russian forces have almost completed the construction of a system of modern fortifications along the east bank of the Dnipro River. Saldo claimed the fortifications are an emergency backup and that he is certain Russian forces will return to Kherson City in 2023.[48] A popular Russian news source reported on January 14 that Russian Deputy Prime Minister Marat Khusnullin stated that Russia will complete the reconstruction of all four spans of the damaged section of the Kerch Strait bridge by the end of February.[49] Russian forces continued routine strikes along the west (right) bank of the Dnipro River on January 14.[50]

Ukrainian forces continued to strike Russian rear areas. Ukrainian Mayor of Melitopol Ivan Fedorov stated that Ukrainian forces destroyed a Russian deployment point in Tokmak, Zaporizhia Oblast, during the night of January 13 and January 14.[51] Fedorov also reported that two loud explosions of unspecified origin occurred in occupied Melitopol, Zaporizhia Oblast, on January 14.[52] Fedorov stated that preliminary information indicates that the explosions damaged a Russian military base situated on the premises of a factory.[53] No actors have claimed responsibility for the attack at this time. Zaporizhia Oblast occupation administration deputy Vladimir Rogov claimed on January 14 that Russian air defenses intercepted a Ukrainian missile in the vicinity of Melitopol.[54]

Western officials are increasingly joining Ukrainian authorities in warning that Russia is preparing for an imminent second wave of mobilization. UK news outlet The Times reported on January 13 that Western intelligence indicates that Russian President Vladimir Putin could send a fresh wave of mobilized soldiers to the front lines in Ukraine by April if Russian officials decide to launch a fresh wave of mobilization within weeks.[55] An unnamed western official stated that Russian regional recruitment offices are engaged in ”serious preparations.”[56] The official added that a Kremlin-sponsored poll also showed that Russians are anxious about the war but support its continuation in fear of a defeat.

Kremlin Press Secretary Dmitry Peskov attempted to limit growing confusion and alarm among Russian audiences regarding the expansion of mobilization eligibility. Peskov commented on contradictory official reports that Russian Chief of the General Staff Valery Gerasimov terminated mobilization exemptions for fathers of three or more children, stating that “the Kremlin knows nothing about such termination.”[57] Peskov’s response neither confirmed nor denied that the Russian Ministry of Defense (MoD) has terminated or plans to terminate deferrals for fathers with more than three children, however. Controversy continues among Russian domestic audiences regarding the likelihood and implications of a coming second wave of mobilization.[58]

Kremlin officials continue to propose expansions of the categories of Russians eligible for mobilization. Russian Investigative Committee Head Aleksandr Bastrykin stated on January 13 that foreigners are receiving Russian citizenship in droves and are bypassing military service, including more than a million migrants from Central Asia and the Caucasus over the past five years.[59] Bastrykin argued that Russia should consider participation in the ”special military operation” a priority for naturalized Russian citizens.[60]

Russian authorities continue efforts to use religion to justify their force generation campaigns and recruit forces to partake in the war in Ukraine. A prominent Russian milblogger claimed on January 13 that the Chechen Republic Spiritual Administration of Muslims Chairman, Mufti Salah Mezhiyev, will deploy to Ukraine to fight and perform religious activities.[61] The milblogger also claimed that Russian officials are forming a battalion of imams and training theologians, including Mezhiyev, at the Special Forces University in Gudermes, Chechnya.[62]

Russian officers continue attempts to eliminate publicized dissent among Russian servicemembers. A wife of a mobilized soldier in Russia’s 392nd Motorized Rifle Regiment told a Russian news outlet that Russian military command sent mobilized soldiers serving in the regiment to frontline trenches as punishment for recording a video appeal about their lack of equipment.[63]

Ukrainian partisan attacks and resulting Russian security crackdowns continue to disrupt Russian rear security efforts and occupation authorities’ efforts to establish stable control. The Ukrainian Resistance Center identified the car that exploded on January 13 on the outskirts of Berdyansk, Zaporizhia Oblast, as the vehicle of Berdyansk Raion occupation administration head Oleksiy Kychyhin.[69] Russian sources claimed that the explosion did not injure Kychyhin.[70] Russian occupation authorities continue to surveil, monitor the phone communications of, and raid the homes of residents in the occupied territories due to their growing concern of partisan activity or collaboration with Ukrainian forces.[71]

ISW will continue to report daily observed indicators consistent with the current assessed most dangerous course of action (MDCOA): a renewed invasion of northern Ukraine possibly aimed at Kyiv.

ISW’s December 15 MDCOA warning forecast about a potential Russian offensive against northern Ukraine in winter 2023 remains a worst-case scenario within the forecast cone. ISW currently assesses the risk of a Russian invasion of Ukraine from Belarus as low, but possible, and the risk of Belarusian direct involvement as very low. This new section in the daily update is not in itself a forecast or assessment. It lays out the daily observed indicators we are using to refine our assessments and forecasts, which we expect to update regularly. Our assessment that the MDCOA remains unlikely has not changed. We will update this header if the assessment changes.

Observed indicators for the MDCOA in the past 24 hours:

Observed ambiguous indicators for MDCOA in the past 24 hours: