Russian occupation officials in Crimea reported another drone attack on the Russian Black Sea Fleet Headquarters in Sevastopol on August 20. Russian-appointed Governor of Sevastopol Mikhail Razvozhaev claimed that Russian forces were unable to shoot down a drone, resulting in the drone hitting the roof of the Black Sea Fleet headquarters.[1] Razvozhaev then retracted his initial statement and claimed that a fleet air defense post shot down the drone, which landed on the roof and caught fire.[2] Social media footage showed a loud explosion and a cloud of smoke around the headquarters, and the drone likely detonated rather than being shot down.  Some OSINT accounts have identified the drone as a commercially-available “Skyeye 5000mm Pro UAV.”[3] Ukrainian officials did not claim responsibility for the attack as of the time of this publication. ISW has previously reported that Crimean occupation officials have obliquely accused Ukraine of orchestrating a drone attack on the headquarters on July 31 during Russia’s Navy Day.[4]

Russian occupation officials in Crimea are likely considering strengthening security on the peninsula following the attacks on Russian military infrastructure, and such measures may draw Russian security forces away from the front lines. Razvozhaev stated that all security services in Sevastopol are operating in “high alert” mode and controlling all entrances to the city.[5] Razvozhaev claimed that Sevastopol residents are asking the occupation administration to increase patrols in the city and establish new checkpoints, returning the peninsula to a security posture such as it had after Russia initially seized it in 2014. ISW has previously assessed that Russian forces have been using all types of security forces, including Rosgvardia, as combat forces and will likely need to divert some of these forces from the front lines and from occupation security duties elsewhere to defend occupied Crimea.[6] Russia’s continued failures to stop attacks against occupied Crimea may also spark public discontent within Russian society. One Russian milblogger criticized Russian forces for not using more electronic warfare (EW) equipment following the first drone attack on July 31.[7] Social media footage already shows many Russians waiting in traffic jams to leave Crimea and go to Russia, which may indicate growing public concern for the effectiveness of Russian security measures.[8] 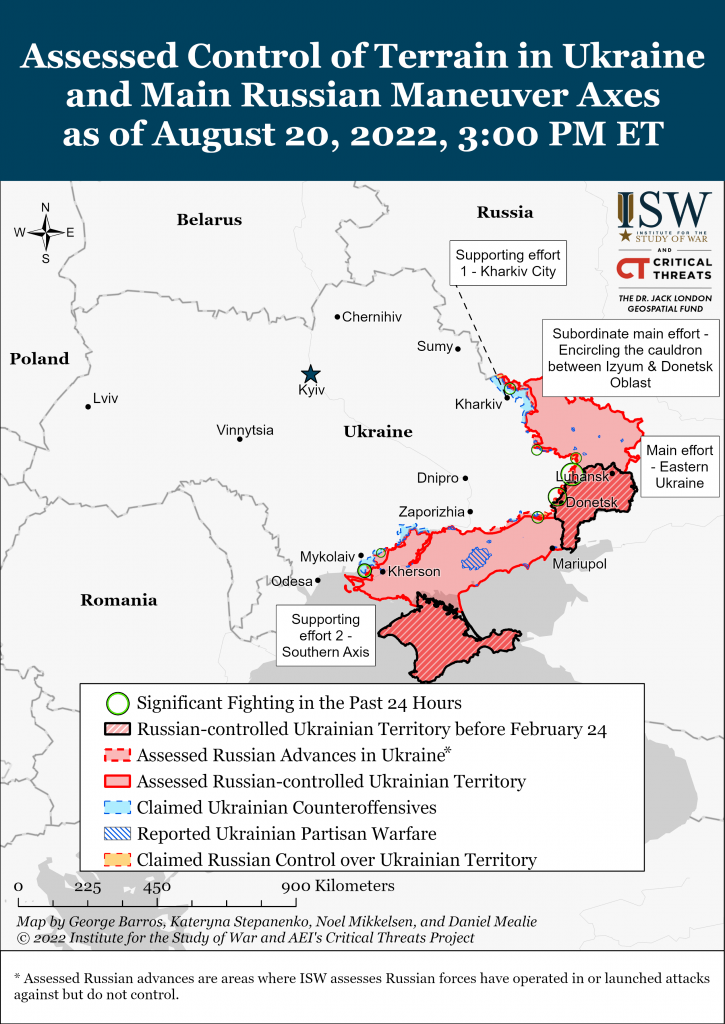 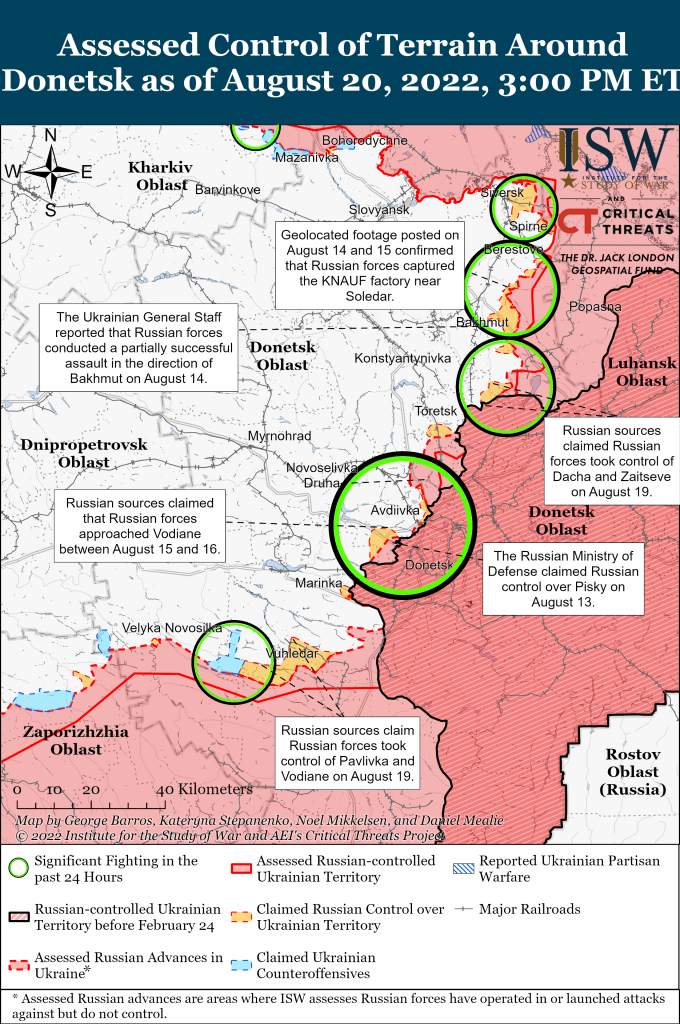 Russian forces continued to focus on advancing northeast and south of Bakhmut on August 20 but did not make territorial gains in the area. The Ukrainian General Staff reported that Russian forces unsuccessfully attacked Bakhmut, Soledar, and Bakhmutske (northeast of Bakhmut).[16] Russian forces reportedly failed to advance to Zaytseve and Kodema, approximately 9 and 13 kilometers southeast of Bakhmut, respectively.[17] Russian forces also conducted unsuccessful attacks in the direction of Horlivka-Mayorsk, about 21 km due southwest of Bakhmut.[18] The Donetsk People’s Republic (DNR) Militia claimed that the DNR “Kalmious” Brigade is supporting Russian forces advancing north of Horlivka with artillery fire but did not make any territorial claims.[19] The DNR Militia also claimed that the DNR’s 3rd Brigade seized Ukrainian positions around Zaytseve, but ISW cannot independently verify the DNR’s claims.[20] The UK Defense Ministry noted that Russian forces have approached the outskirts of Bakhmut but have not broken into Bakhmut’s defensive areas.[21] 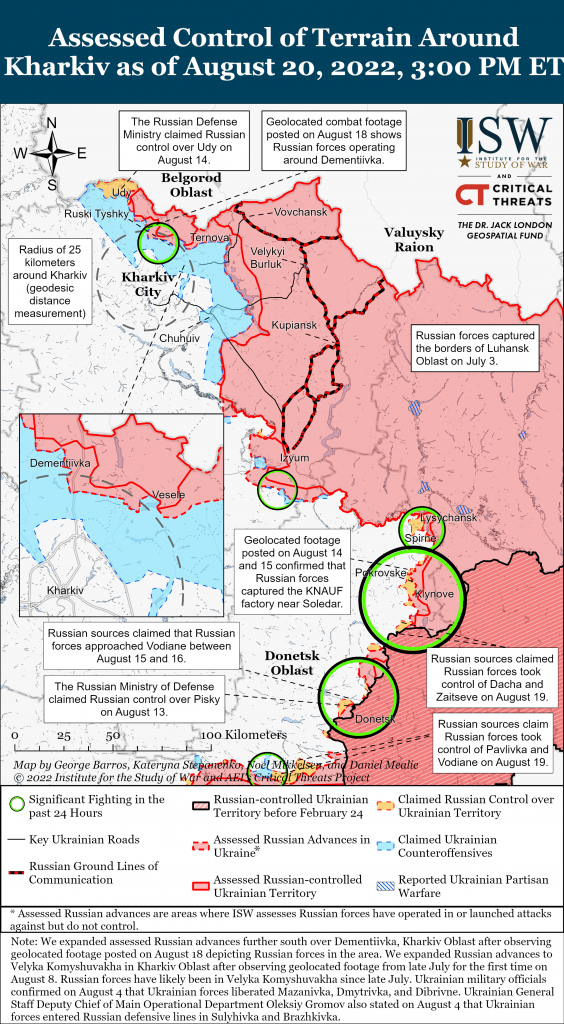 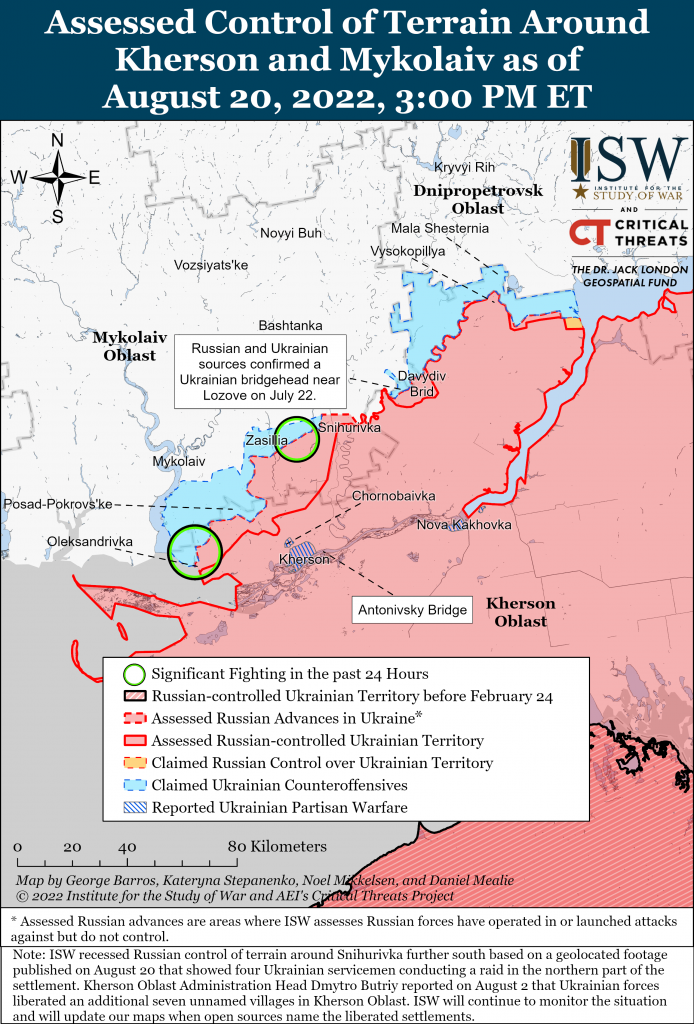 Russian occupation authorities again accused Ukraine of shelling the Zaporizhia Nuclear Power Plant (ZNPP), while Russian forces continued to shell settlements in Dnipropetrovsk Oblast across the Dnipro River. Russian-backed Zaporizhia Oblast Military-Civilian Administration Head Vladimir Rogov claimed that Ukrainian forces shelled in the vicinity of one of the administrative buildings at ZNPP using Western-provided military equipment on August 20.[37] ISW cannot independently verify if shelling occurred on August 20. Editor and correspondent for NPR Science Geoff Brumfiel concluded that available satellite imagery from August 19 will not suffice to make assessments of whether or not shelling occurred without footage from the ground.[38] Russian occupation authorities have control of the narrative given that they have access to the occupied ZNPP and have notably failed to present clear evidence to support their claims. Ukrainian local officials reported that Russian forces continued to fire Grad multiple launch rocket system (MLRS) rockets at Marhanets and tube artillery at Nikopol.[39] Ukrainian forces also shot down four Russian Kalibr cruise missiles over Dnipropetrovsk Oblast.[40]

Ukrainian forces continued to strike Russian ammunition depots and positions in Kherson and Zaporizhia oblasts. Advisor to the Kherson Oblast Administration Serhiy Khlan reported explosions in Chornobaivka (about 7 km northwest of Kherson City), and social media footage showed three distinct smoke columns reportedly at the Chornobaivka airfield.[41] Khlan also reported that there were two Ukrainian strikes on unspecified targets near Nova Kakhovka and Beryslav on August 19.[42] The Ukrainian Southern Operational Command reported that Ukrainian aviation launched 11 airstrikes on Russian positions along the line of contact in Kherson Oblast.[43] Geolocated footage showed Ukrainian artillery striking Russian military equipment in northwestern Kherson Oblast.[44] Melitopol Mayor Ivan Fedorov stated that Ukrainian forces struck a Russian military base in Melitopol, noting that Russian forces did not intercept the missile because the main part of the Russian air-defense units has redeployed from Melitopol to Kherson Oblast.[45] Fedorov added that Russian forces fired a missile at Melitopol from the southern direction as a response to Ukrainian strikes against Russian military objects, although there is no evidence to support this assertion.[46] Kremlin-sponsored media claimed that Russian air-defense systems activated overnight and accused Ukrainian forces of striking civilian infrastructure.[47] Social media footage shows reported explosions in Melitopol, but the point of impact is unclear from the footage.[48]

Russian forces remain unable to restore a bridge crossing over the Dnipro River in Kherson Oblast. A Russian military correspondent showed the severe damage to the Kakhovka Bridge that Ukrainian strikes have caused and claimed that Russians used the bridge as an alternative route for “humanitarian help” after Ukrainian strikes against the Antonivsky Bridge.[49] The military correspondent claimed that the bridge is reparable and partially operational, but Khlan stated that Russian repair efforts have been failing in recent days.[50]

Russian proxy republics in Donbas are continuing covert mobilization efforts but are struggling to generate sufficient manpower to create combat-ready units. Ukraine’s Resistance Center reported that Luhansk People’s Republic (LNR) authorities are actively tracking down eligible men for military service, including by exchanging food for information on the whereabouts of eligible men and searching for eligible men near schools and kindergartens.[51] Ukrainian Luhansk Oblast Administration Head Serhiy Haidai claimed that LNR authorities are even mobilizing men with chronic illnesses due to a shortage of eligible men.[52]  Ukraine’s Resistance Center reported that the Donetsk People’s Republic (DNR) and LNR are sending mobilized men to the front lines without adequate ammunition and equipment and called on civilians to flee territories under occupation or under risk of occupation to avoid mobilization.[53] Deputy Military Commissar of LNR Alexei Kurchenko denied reports of forced mobilization and claimed that LNR is recruiting volunteers for contract service.[54]

Conditions in occupied territories continue to deteriorate. Khlan said on August 19 that Russian occupation authorities are restricting passage through the border between Kherson Oblast and Crimea and that weather conditions forced the closure of the Vasylivka checkpoint 45 km south of Zaporizhia City, preventing Ukrainians in occupied territories from evacuating.[66] The Ukrainian Mariupol City Administration reported on August 20 that there are constant firearm incidents in Mariupol and that shootings are becoming a new way of solving problems within the city, indicating poor governance in occupied Donetsk Oblast.[67] Donetsk People’s Republic (DNR) officials announced that the Verkhnyokalmiuska Water Filtration Station in Donetsk City ceased operations overnight on August 19-20 due to low water levels and will not resume operations for at least three days, exacerbating existing struggles to provide clean water to residents of Donetsk City and the surrounding areas.[68]