Russian forces continued to reposition to continue their invasion in eastern and southern Ukraine, having abandoned the attack on Kyiv.  They have largely completed their withdrawal from the Kyiv area and are reportedly redeploying some of the withdrawn combat forces from Belarus to Russia.  Ukrainian forces are moving to regain control over segments of the state border in Chernihiv, having already done so in Kyiv and Zhytomyr Oblasts.  Russian troops are pulling back toward Russia along the Sumy axis as well, but it is not yet clear if they intend to retreat all the way back to the border or will try to hold some forward positions on the Sumy axis.

Russia has not yet committed forces withdrawn from the Battle of Kyiv back into the fighting in eastern Ukraine.  Russian reinforcements continuing the drive southeast from Izyum toward Slovyansk are from elements of 1st Guards Tank Army units that had been in the Kharkiv-Sumy area.  Russian units that retreated from Kyiv will not likely regain combat effectiveness for some time, and it is not clear that the Russians intend to return them to the fight soon. That said, an unconfirmed Ukrainian military intelligence report suggests that Moscow could soon send the 64th Motorized Rifle Brigade of the 35th Combined Arms Army, a unit that reportedly committed war crimes in Bucha, into the fight in eastern Ukraine in the hopes that guilty members of that brigade and witnesses of its war crimes are killed in combat with Ukrainian forces.[1]

Belgorod continues to emerge as the primary concentration area for Russian forces regrouping and refitting after their retreat from Kyiv and in preparation for onward movement to their home stations or to join the fighting in the east.  Elements of the Central Military District pulling back from Chernihiv Oblast are reportedly on their way to Belgorod.[2]  Their final destination is not yet known.

The Battle of Mariupol continues, with Russian forces continuing to pound the city using artillery and airpower.  The constrained information environment in Mariupol prevents us from assessing concrete changes in control of terrain, but Ukrainian forces appear to be sustaining organized resistance in parts of the city.

Russian offensive operations southeast from Izyum toward Slovyansk continued on a small scale and made limited progress.  Russia has not yet attempted to mass large concentrations of forces on this axis but continues instead to send individual battalion tactical groups to advance on their own. 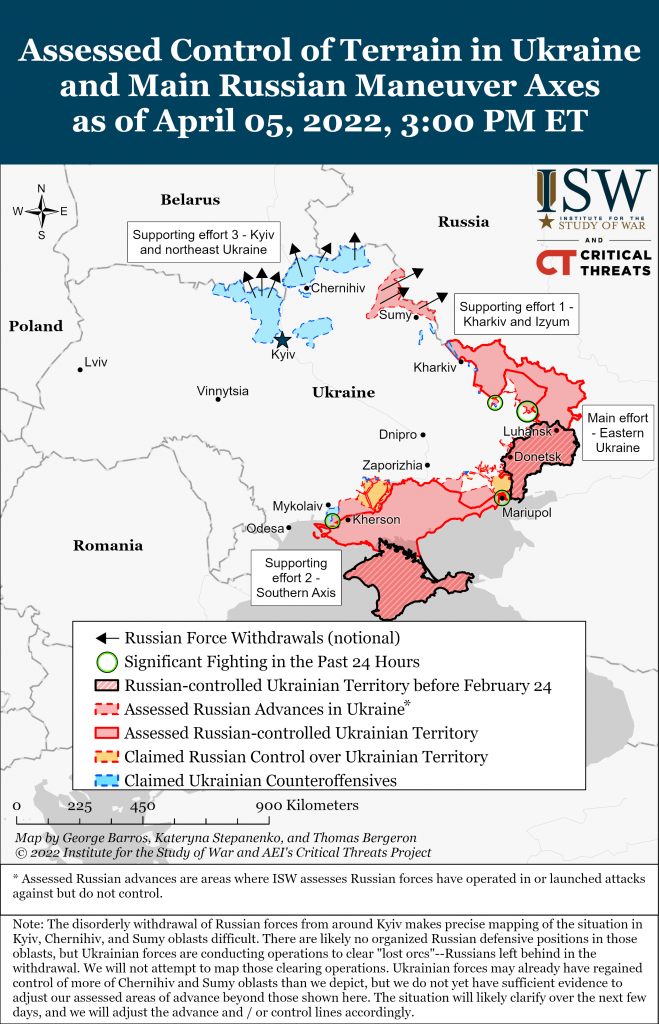 Ukrainian forces continued to conduct an organized defense of parts of Mariupol in the past 24 hours.  Russian forces conducted an intense artillery and airstrike campaign against the city and targeted Ukrainian positions around the Azovstal Plant. The information environment in Mariupol remains restricted, however, and we cannot confirm further territorial changes over the last 24 hours.[3] 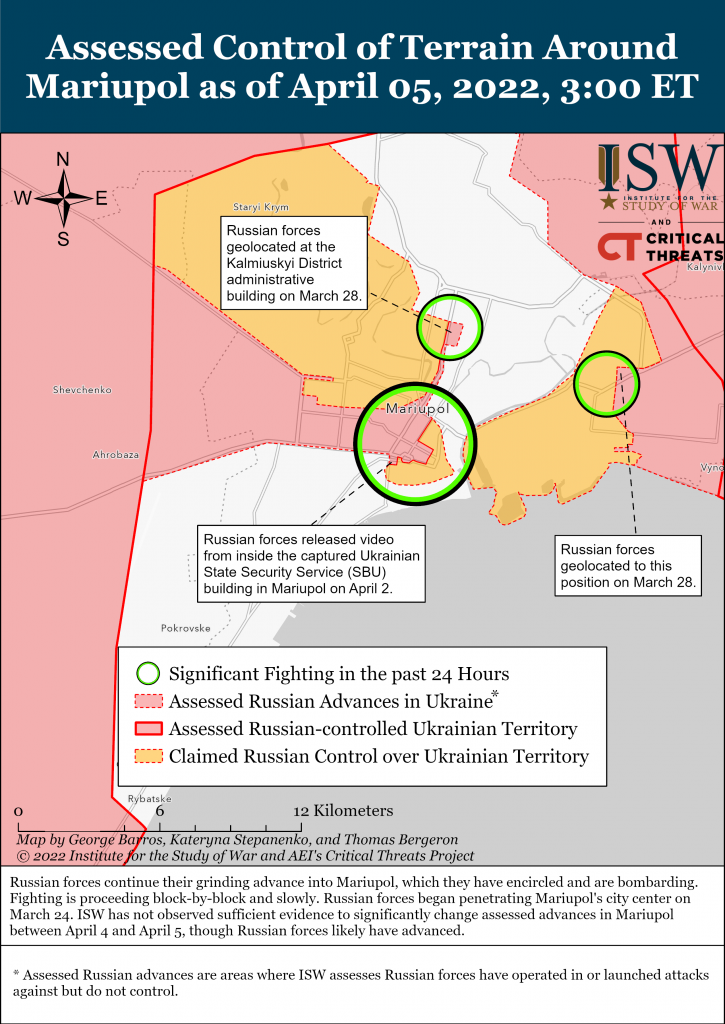 Russian forces continued operations to seize Popasna and Rubizhne, roughly 240 kilometers southeast of Kharkiv, in the past 24 hours, focusing primarily on air and artillery attacks, likely including the one that destroyed a nitric acid tank in Rubizhne on April 5.[4]  Russian forces also reportedly dropped petal mines on Popasna on April 5.[5]

Russian forces continued to bombard settlements in Kharkiv Oblast in the past 24 hours, and the situation around Kharkiv remains generally unchanged.[6]  Multiple sources report that Russian forces fired a long-range multiple launch rocket system from somewhere in Kharkiv Oblast toward an unspecified location in Mykolayiv Oblast on April 4, killing 10 and wounding 46.[7]

Elements of the Russian 1st Guards Tank Army continued efforts to advance southeast from Izyum toward Slovyansk.  Russian forces advanced seven kilometers southwest of Izyum in the direction of Barvinkove, about 47 km southwest of Izyum, and took control of the village of Brazhkivka, about 25 kilometers south of Izyum.[8] One battalion tactical group (BTG) of the 1st Tank Regiment of the 2nd Guards Motor Rifle Division attempted to seize the village of Sulyhivka (about 28 km south of Izyum) but was not successful.[9] The advance to the southwest may be part of a Russian effort to bypass Ukrainian forces that recently conducted a successful counterattack along the direct highway from Izyum to Slovyansk.  Pro-Russian sources reported that elements of both the 1st Guards Tank Regiment of the 2nd Guards Motorized Rifle Division and 13th Tank Regiment of the 4th Guards Tank Division are operating in the vicinity of Izyum as of April 4.[10]

The Ukrainian General Staff reported on April 5 that Russian forces attacked Oleksandrivka, about 40 kilometers west of Kherson, likely in an effort to retake it after a successful Ukrainian counter-attack had seized it in mid-March.[11] 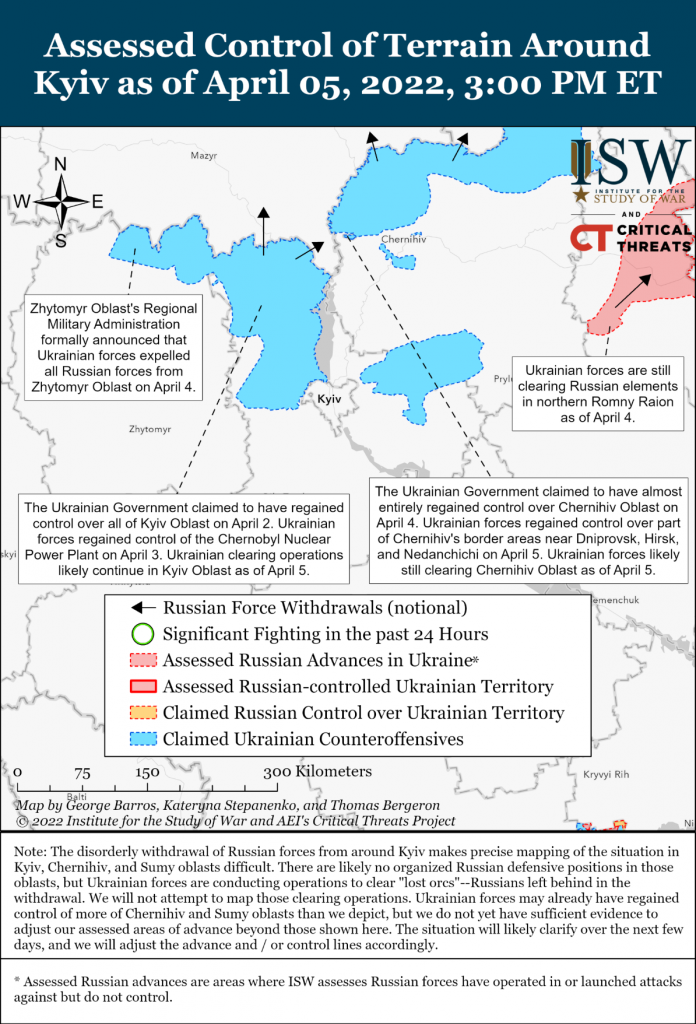