Ukraine has won the Battle of Kyiv. Russian forces are completing their withdrawal, but not in good order. Ukrainian forces are continuing to clear Kyiv Oblast of isolated Russian troops left behind in the retreat, which some Ukrainian officials describe as “lost orcs.” Russian forces had attempted to conduct an orderly retreat from their positions around Kyiv with designated covering forces supported by artillery and mines to allow the main body to withdraw. The main body of Russian troops has withdrawn from the west bank of the Dnipro and is completing its withdrawal from the east bank, but the retrograde has been sufficiently disorderly that some Russian troops were left behind.

The war is far from over and could still turn Russia’s way if the Russian military can launch a successful operation in eastern Ukraine. The current line of Russian occupation in southern and eastern Ukraine is still a significant gain in Russian-controlled territory since the start of the war. If a ceasefire or peace agreement freezes a line like the current front-line trace, Russia will be able to exert much greater pressure on Ukraine than it did before the invasion and may over time reassemble a more effective invasion force. Ukraine’s victory in the Battle of Kyiv is thus significant but not decisive.

The disorder of the Russian withdrawal suggests that at least some of the units now reconcentrating in Belarus and western Russia will remain combat ineffective for a protracted period. Russian troops attempting to refit after pulling back from around Kyiv will likely have to reconsolidate into their units, identify which soldiers are still present, sort out their equipment and assess its combat readiness, and generally reconstitute before they can even begin to receive replacements and new equipment and prepare for further combat operations.

Russian forces are likely abandoning the east bank of the Dnipro fully as well, withdrawing from around Chernihiv to the north and from Brovary to the east. Russian troops will likely seek to hold a salient around Konotop and Sumy long enough to allow their forces to complete their retrograde from near Kyiv but will then likely withdraw back to Russia from almost all their positions west of Kharkiv.

Moscow is attempting to concentrate reserves and some units pulled from the fight around Sumy to reinforce its offensive operations in the east but is encountering serious challenges in that effort. The Ukrainian General Staff reported on April 3 that Russian soldiers are resisting and in some cases refusing orders to enter or re-enter the war effort. The General Staff asserted that the two battalion tactical groups (BTGs) that moved from South Ossetia toward Donbas less than a week ago refused to fight and that plans to move them back to South Ossetia are in train.[1] The General Staff claimed that about 25 soldiers of the Russian 31st Separate Airborne Brigade refused orders to re-enter combat citing excessive losses.[2] The General Staff also asserted that commanders at various echelons in the Russian 3rd Motorized Rifle Division have refused to participate in combat operations.[3] We have no independent verification of these reports, but they are credible in light of the losses Russian forces have suffered and of independent reports of Russian soldiers killing commanders and commanders committing suicide from earlier in the conflict.

Russian efforts to advance its offensive operations in eastern Ukraine made limited progress in the past 24 hours. Fighting continues in Mariupol and on the Izyum-Severodonetsk axis. 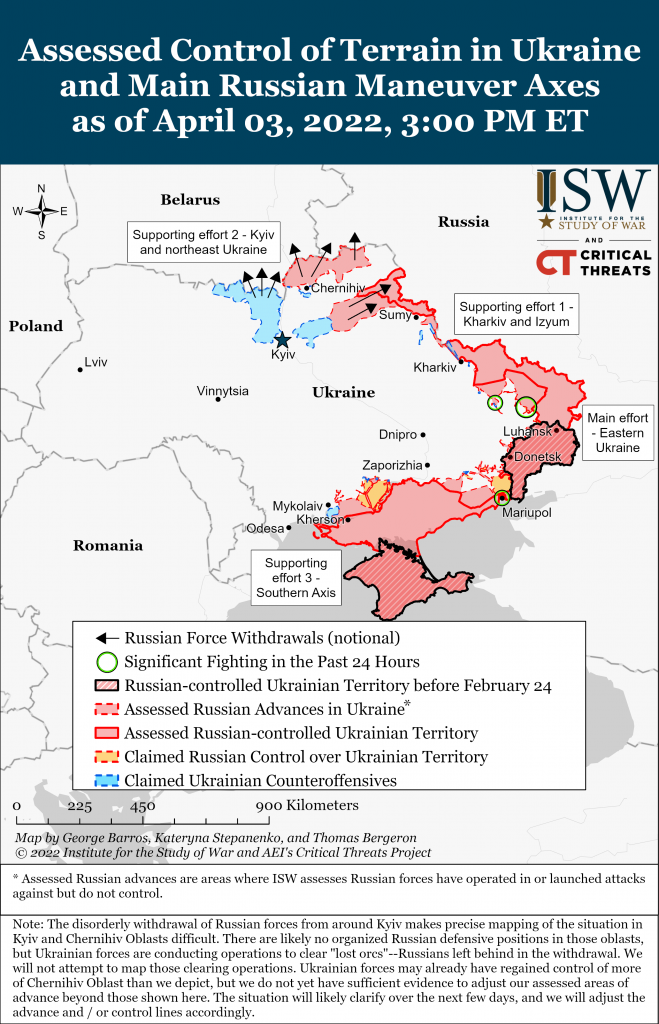 Little information about what is occurring in Mariupol is available likely due to the loss/interdiction of communications from the city. Russian media reported fighting in the city on April 2.[4] Russia will likely make much of its final capture of the city for propaganda purposes but has not yet done so, which suggests that it has not yet completed the seizure. The Ukrainian General Staff also noted on April 3 that Russian forces are still preparing efforts to complete their seizure of the city.[5] 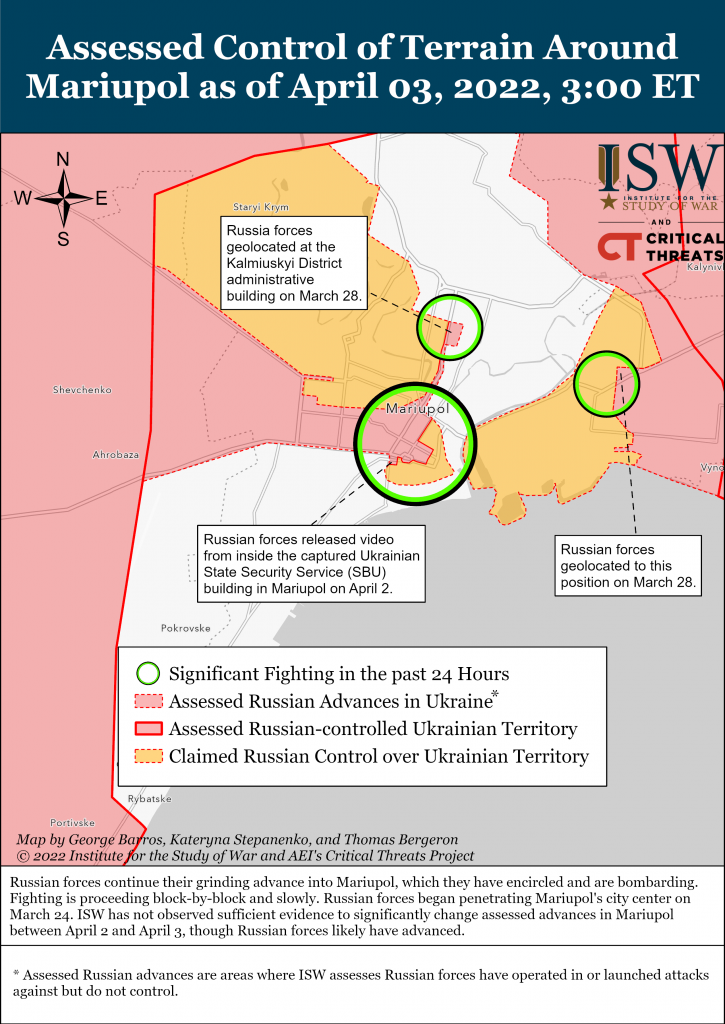 The Ukrainian governor of Luhansk Oblast claimed on April 3 that mayors of the towns of Rubizhne, Milove, Stanytsia Luhanska, and Markivka are working with the LNR.[6] LNR officials separately claimed to be clearing Rubizhne and evacuating civilians, while blaming Ukrainian forces for damaging the city (presumably by defending it).[7] We have no independent verification of the LNR claims. It is unclear if the LNR claims are based on actual Russian military control over the towns or on the claimed collaboration of the towns’ mayors. The Ukrainian General Staff report of 2400 April 2 suggested that Russian forces had not yet secured Rubizhne, in any event.[8]

Russian units reportedly attacked Ukrainian positions at various locations throughout Donetsk Oblast but made few gains, according to the Ukrainian General Staff.[9] Social media reports confirm heavy fighting over the past few days.[10] 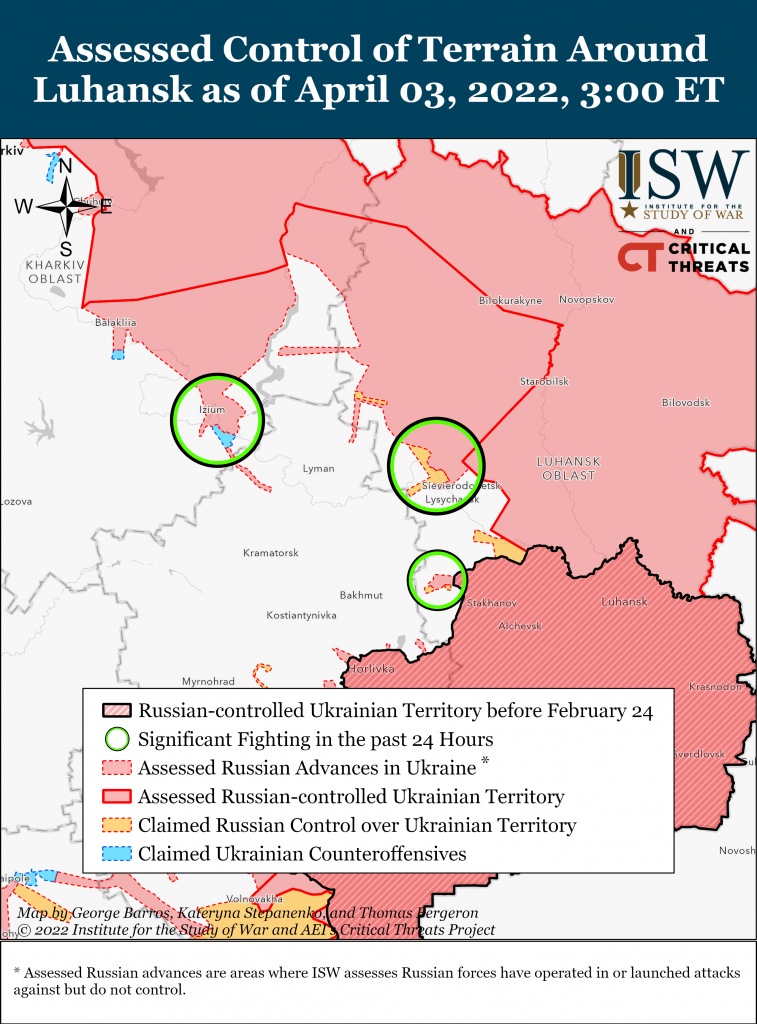 Russian forces appear to be continuing efforts to concentrate forces to resume the offensive from Izyum toward the southeast but did not launch any large-scale operation in the past 24 hours. The Russians continue to bombard Kharkiv, but the Ukrainian General Staff reported on April 2 that the intensity of the bombardment had somewhat decreased.[11] The Ukrainian General Staff claimed on April 3 that Ukrainian forces had inflicted 80% losses on the Russian 59th Tank Regiment near Kharkiv over an unspecified period.[12]

Russian forces west of Kharkiv and around Sumy appeared to focus on covering the withdrawal of Russian troops from eastern Kyiv.[13] The Ukrainian General Staff reported on April 2 that one battalion tactical group (BTG) of the 1st Guards Tank Army was covering the retrograde of the elements of the 2nd Combined Arms Army from Brovary through Sumy.[14] Local Ukrainian reports indicate that Russian forces still operate from Billopilya to Konotop on April 2.[15] We assess that these reports are likely accurate despite claims by a Ukrainian member of parliament on April 3 that Ukrainian forces had liberated Konotop.[16] Russian forces likely will eventually abandon Konotop and most or all of their positions west of Kharkiv once their withdrawal from the Brovary axis is complete.

The withdrawal of the main body of Russian forces along both banks of the Dnipro River is likely complete. The disorderly nature of the withdrawal, which apparently left numerous individual Russian soldiers and possibly small pockets of Russian troops behind, makes precise assessments of the situation throughout Kyiv and Chernihiv Oblasts impossible at this time. Ukrainian officials describe their clearing operations as looking for “lost orcs.”[17] We will update our assessments in the coming days as the situation clarifies but anticipate that Ukrainian forces will finish clearing the last remnants of Russian troops from the Kyiv axis within the next few days. There is no evidence that the isolated Russian troops Ukrainian forces are encountering stayed behind deliberately, and the Russian pockets do not appear to be offering coherent or coordinated resistance to Ukrainian clearing operations.

Sourcing for this assessment is available here.[18] 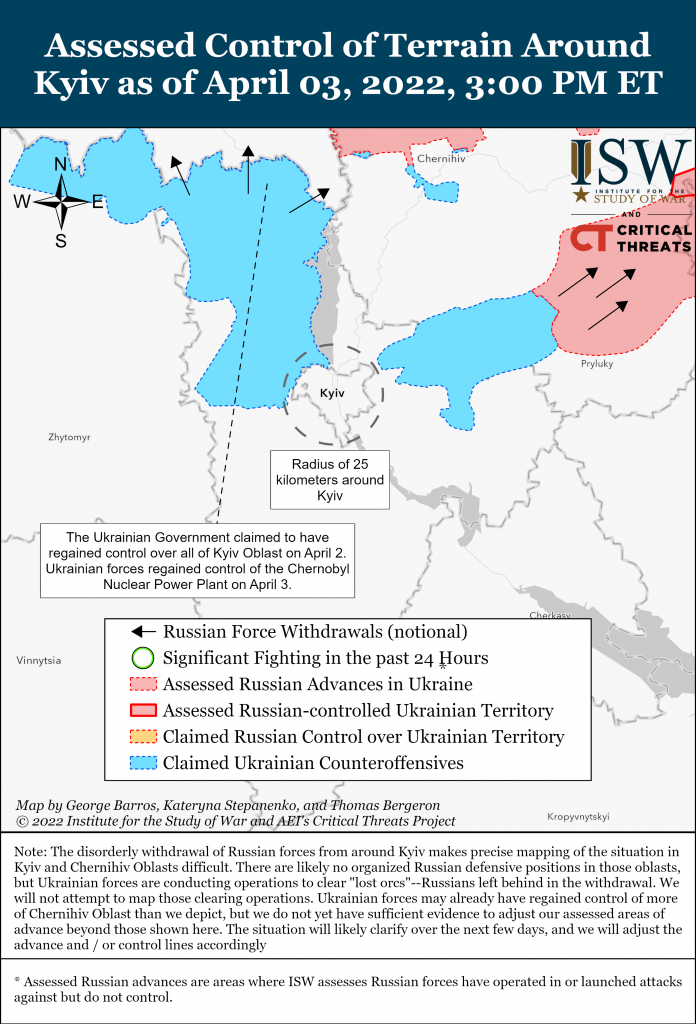 Russian forces continued limited offensive operations in the southern axis. The Ukrainian General Staff reported on April 3 that Russian troops were fighting to retake Oleksandirvka in northern Kherson Oblast after Ukrainian forces regained control of the town in mid-March.[19]