Russian forces have adopted a sounder pattern of operational movement in eastern Ukraine, at least along the line from Izyum to Rubizhne. Russian troops are pushing down multiple roughly parallel roads within supporting distance of one another, allowing them to bring more combat power to bear than their previous practice had supported. Russian troops on this line are making better progress than any other Russian advances in this phase of the war. They are pushing from Izyum southwest toward Barvinkove and southeast toward Slovyansk. They are also pushing several columns west and south of Rubizhne, likely intending to encircle it and complete its capture. The Russian advances even in this area are proceeding methodically rather than rapidly, however, and it is not clear how far they will be able to drive or whether they will be able to encircle Ukrainian forces in large numbers.

Russian forces on the Izyum axis likely benefit from the absence of prepared Ukrainian defensive positions against attacks from the Kharkiv direction toward Donbas. Ukraine has prepared to defend the line of contact with Russian-occupied Donbas since 2014, and Russian troops continue to struggle to penetrate those prepared defenses—as shown by repeated Russian efforts to take Avdiivka, just north of Donetsk City, or to advance through Popasna, just beyond the original line of contact.

Russian troops continued to attack Ukrainian defenders in Mariupol, including in the Azovstal Plant, despite Russian President Vladimir Putin’s claims that there is no more fighting in the city. Ukrainian forces likely still hold important positions beyond the plant itself, and Russian forces continue to fight outside the plant, bomb the plant, and assault positions near the plant. Putin’s order not to chase Ukrainian defenders into the tunnels and catacombs of the facility evidently did not preclude continued efforts to secure at least the entire perimeter of the plant and likely also the important M14 highway that runs along it to the north and northwest.

Russia is staging false-flag attacks in Transnistria, Moldova, likely setting conditions for further actions on that front. The two motorized rifle battalions Russia has illegally maintained in Transnistria since the end of the Cold War are not likely sufficient to mount a credible attack on Odesa by themselves, nor are the Russians likely to be able to reinforce them enough to allow them to do so. They could support more limited attacks to the northwest of Odesa, possibly causing panic and creating psychological effects to benefit Russian operations in the south of Ukraine.

Russia may also seek to destabilize Moldova itself, however. Comments by the head of the Donetsk People’s Republic and other Russian officials and proxies raise the possibility that Putin might recognize the self-styled Pridnestrovian Moldavian Republic (PMR) in Transnistria as he recognized the Donetsk and Luhansk People’s Republics. The PMR could then ask for additional Russian protection, and Putin could attempt to send some additional forces or capabilities to Transnistria. Any such activities would greatly raise tensions and fears in Moldova and neighboring Romania, putting additional pressure on NATO, possibly giving Putin a cheap “win,” and distracting from Russia’s slog in eastern Ukraine.

Continued indications that Russian forces intend to hold referenda to establish “people’s republics” in occupied areas of southern Ukraine raise the possibility that Putin intends to unveil an array of new “independent” “people’s republics” as part of a Victory Day celebration. The forecast cone is wide, and there is as yet no solid basis to assess one path as much more likely than another. But the false-flag attacks and Russian and Russian proxy reactions to them are alarming, and it behooves NATO and the West to consider the most dangerous courses of action and prepare to meet them. 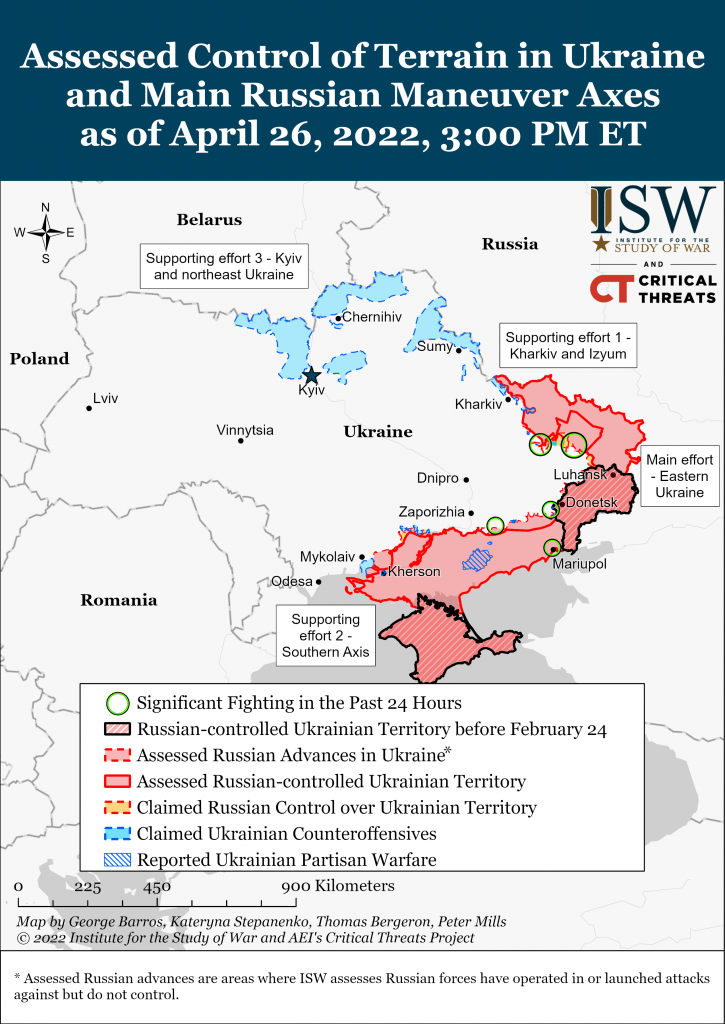 Russian forces continued ground and air assaults against remaining Ukrainian defenders in Mariupol on April 26 but were unsuccessful in storming the Azovstal Steel Plant.[i] Donetsk Oblast Administration Head Pavlo Kyrylenko said that Russian forces launched 35 airstrikes at Azovstal on April 26, which resulted in a fire at one of the plant’s shops.[ii] Russian President Vladimir Putin nevertheless falsely claimed that all fighting has ceased in “liberated” Mariupol in a telephone conversation with Turkish President Recep Tayyip Erdogan.[iii] Advisor to the Mayor of Mariupol Petro Andryushchenko stated that any Russian claims of humanitarian corridors for evacuation from Azovstal are a ”trap.”[iv] Footage of continuing Russian tanks shooting at residential and commercial buildings outside the Azovstal Steel Plant indicates that Ukrainian defenders likely still hold positions beyond the boundaries of the Azovstal plant proper.[v] 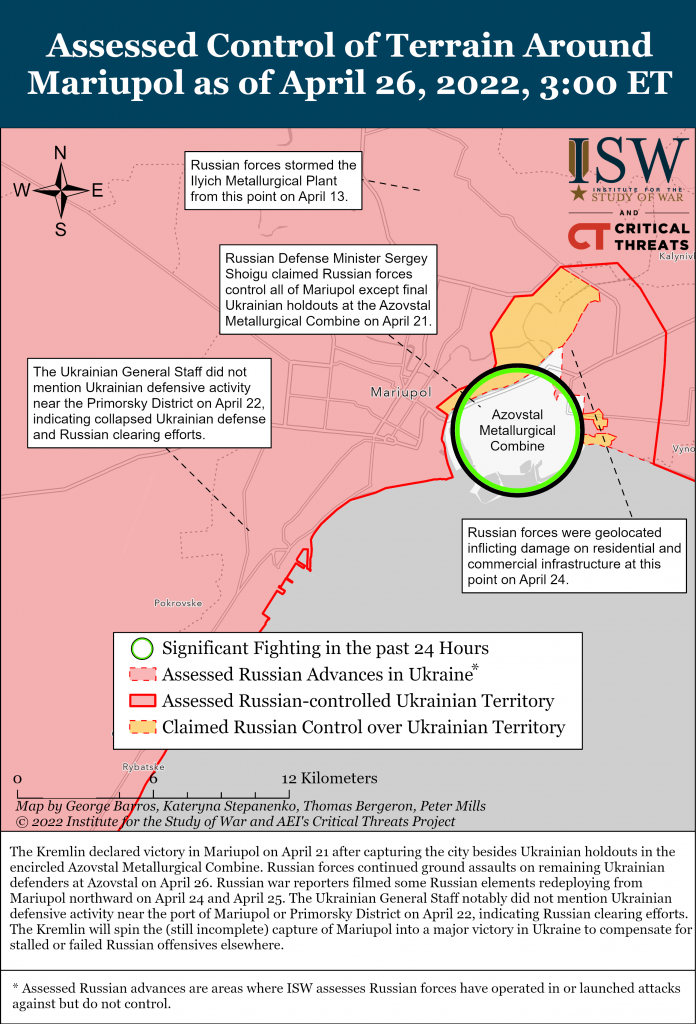 The Ukrainian General Staff reported that Russian forces continued to shell the entire frontline in Donetsk and Luhansk and made marginal advances during ground offensives on April 26.[vi] The General Staff stated that Russian efforts are focused on taking Rubizhne, Popasna, and Marinka, where intense fighting is ongoing.[vii] Forces of the Luhansk People’s Republic (LNR) militia claimed to have taken control of Rubtsi and Yatskivka, located on the administrative border between Donetsk and Kharkiv Oblasts.[viii] The Ukrainian General Staff reported that elements of the 90th Guards Tank Division of the Central Military District are moving in the direction of Kreminna.[ix] Head of Luhansk Regional State Administration Serhiy Haidai notably claimed that top-level LNR leadership and collaborator elements were killed in a suspected gas explosion during a meeting in Kreminna on April 25.[x] The Ukrainian General Staff additionally noted that elements of the 12th Separate Guards Engineering Brigade of the Central Military District are operating in the direction of Severodonetsk.[xi] 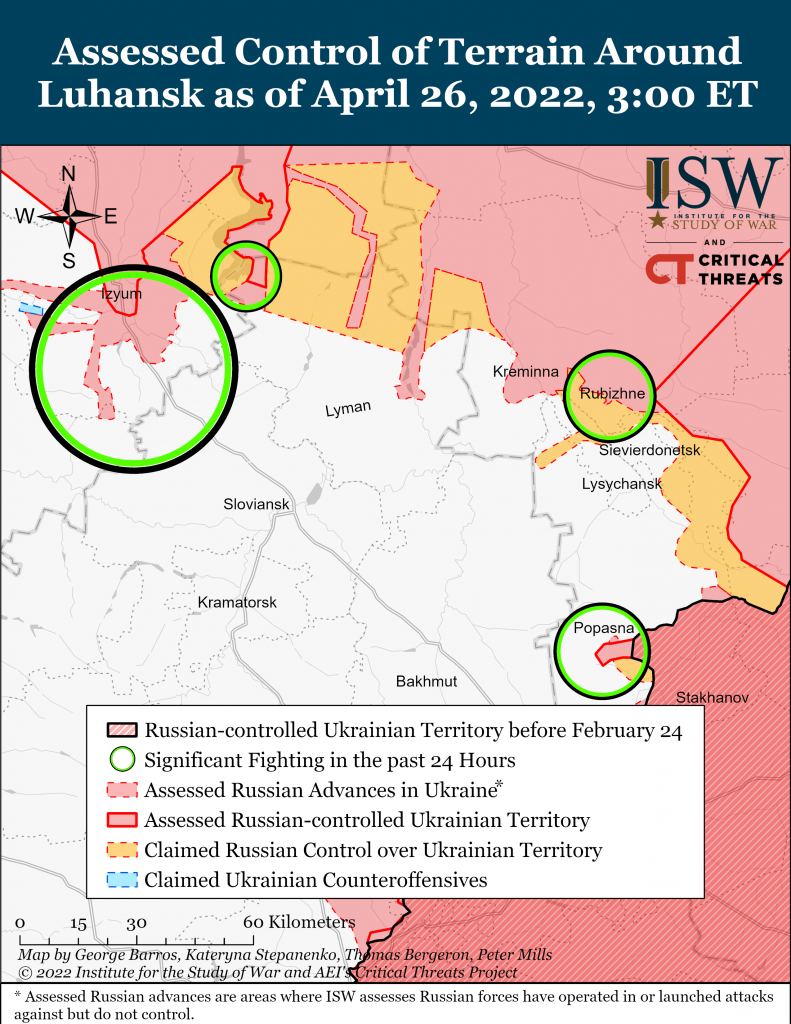 Russian forces continued ground offensives south of Izyum in the directions of Barvinkove and Slovyansk.[xii] The Ukrainian General Staff stated that elements of the 1st Guards Tank Army, 20th Combined Arms Army, 35th Combined Arms Army, and 68th Army Corps are making measured advances in the direction of Barvinkove, about 50 kilometers southwest of Izyum.[xiii] A Pro-Russian source claimed that Russian naval infantry units are operating in the direction of Slovyansk, about 50 kilometers southeast of Izyum.[xiv] The Pro-Russian source additionally claimed that Ukrainian defenders are holding Dovhenke, which is the last settlement in Kharkiv Oblast in the Slovyansk direction. The Izyum- Barvinkove and Izyum-Slovyansk advances are likely meant to drive toward the administrative borders of Donetsk in order to merge offensives south of Izyum with offensives on the territory of the self-proclaimed Donetsk People’s Republic (DNR). Barvinkove and Slovyansk are on different roads leading south from Izyum.

The objective of the Russian advance toward Barvinkove is not immediately obvious, as it leads Russian troops further away from their comrades pushing on Slovyansk. The road continues southeast from Barvinkove to the Donetsk Oblast boundary, however, and it is possible that Russian forces from the Izyum axis are meant to take up positions along much of the boundary to support claims that Russia has “secured the borders of Donetsk and Luhansk oblasts” even if the Russians have not actually secured the entire oblast itself. These advances could also be intended to conduct a deep encirclement of Ukrainian forces to the east as well, although it is far from clear that the Russian troops assigned to this advance are strong enough to accomplish such a task.

Elements of the 6th Combined Arms Army and the Baltic and Northern Fleets maintained a partial blockade of Kharkiv City and continued shelling settlements around Kharkiv City and throughout Kharkiv Oblast on April 26.[xv] 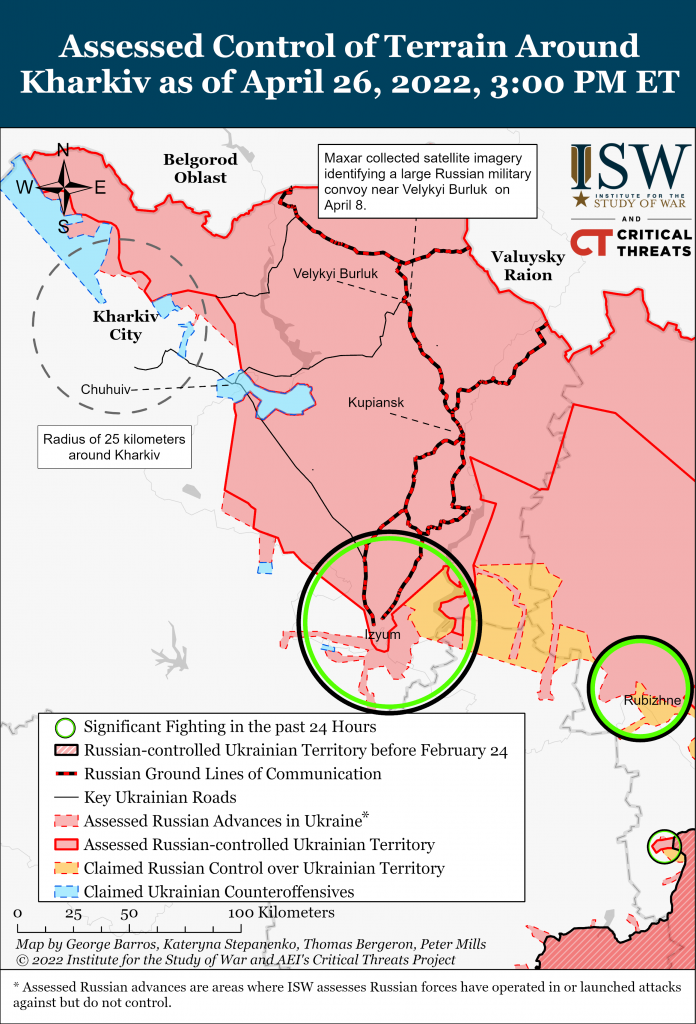 Russian forces continued to shell the entire line of contact on the Southern Axis and are carrying out ground offensives in the direction of Mykolaiv and Kryvyi Rih.[xvi] Russian forces are reportedly forcing residents of Velyka Oleksandrivka (roughly 15 kilometers from the Kherson-Mykolaiv administrative border) to evacuate their homes.[xvii] The Ukrainian General Staff additionally reported that Russian forces suffered losses in the towns of Novodmytrivka and Bilousove, both within 20 kilometers of the Kherson-Mykolaiv administrative border.[xviii] The Russian presence in areas near the border likely indicates preparation for an offensive in the direction of Mykolaiv. Russian missiles hit Odesa, Zaporizhia, Dnipropetrovsk, and Mykolaiv on April 26.[xix] The mayor of Melitopol claimed on April 25 that Russian forces are blocking men from leaving the city and forcing them to mobilize into the Russian army.[xx]

Russian forces likely conducted additional false flag attacks in the illegally-occupied territory of Transnistria on April 25-26. In addition to the grenade attack on the Transnistrian Internal Affairs Ministry that ISW reported on April 25, explosions were reported in Percani and Maiac on April 26.[xxi] Head of the Donetsk People’s Republic Denis Pushilin claimed that the explosions necessitate the next stage of the Russian military operation for the benefit of Transnistria and similar Russian border regions.[xxii] The Ukrainian Main Intelligence Directorate (GUR) claimed on April 26 that Russia is likely preparing an attack on Transnistrian civilians and that the explosions were planned provocations by the Russian FSB to ”instill panic and anti-Ukrainian" sentiment.[xxiii] The GUR stated that Russia may wish to involve Transnistria in the war in Ukraine either to capitalize on Transnistrian reserve forces or to launch attacks on Ukraine from Transnistrian territory.[xxiv] The recent activity in Transnistria is consistent with earlier reports that the airbase at Tiraspol was likely preparing for Russian aircraft on April 6 and 7.[xxv] 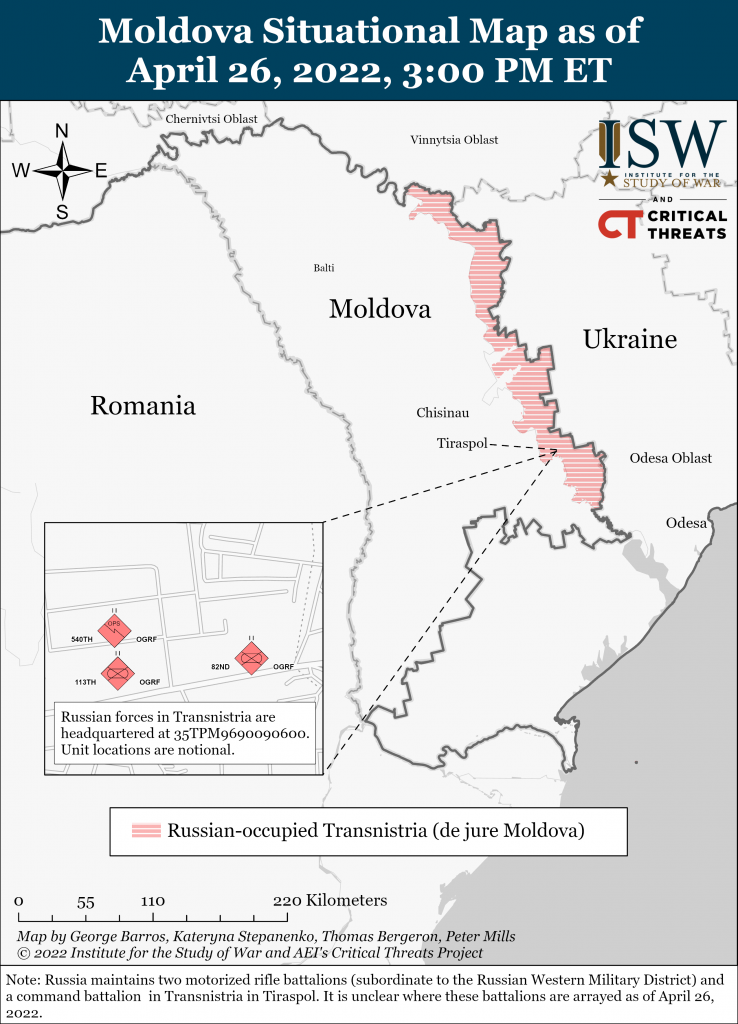