Russian forces continued offensive operations along multiple axes even as they completed moving reinforcements drawn from the retreat from Kyiv into the east and continued redeploying some forces from Mariupol to the north. The Russians have not taken time to refit troops moving from Kyiv or Mariupol before recommitting them to combat operations. They are not pausing offensive operations to wait until they have concentrated overwhelming combat power, and they do not appear to be massing forces on a few decisive axes of advance. They are continuing the pattern of operations they have followed throughout the war: committing small collections of units to widely dispersed attacks along multiple axes and refusing to accept necessary operational pauses to set conditions for decisive operations.

Russian forces have thus far only committed a handful of battalion tactical groups (BTGs) to offensive operations in their various sectors, however, and could still launch a massed offensive operation. We assess that such an operation is unlikely given observed patterns and the inherent limitations of available actual combat power in troops that have fought hard and suffered many casualties, as well as observed challenges with command-and-control at the regiment/brigade and division level. It is possible that the Russians are addressing or attempting to address some of those challenges and will soon launch an offensive in a new and better-coordinated form, but it remains unlikely.

The objectives of Russian offensives around the Izyum-Donetsk City salient are unclear. Russian forces may seek to reach the Izyum-Debaltseve road along two or more axes to encircle a large concentration of Ukrainian forces and built-up areas. Ukrainian officials suggested on April 23 that Russian forces near Rubizhne and Popasna may seek to encircle the Severodonetsk-Lysychansk area rather than pursue the deeper envelopment.[1] It is too soon to evaluate the likelihood of this Russian course of action or the probability of its success. 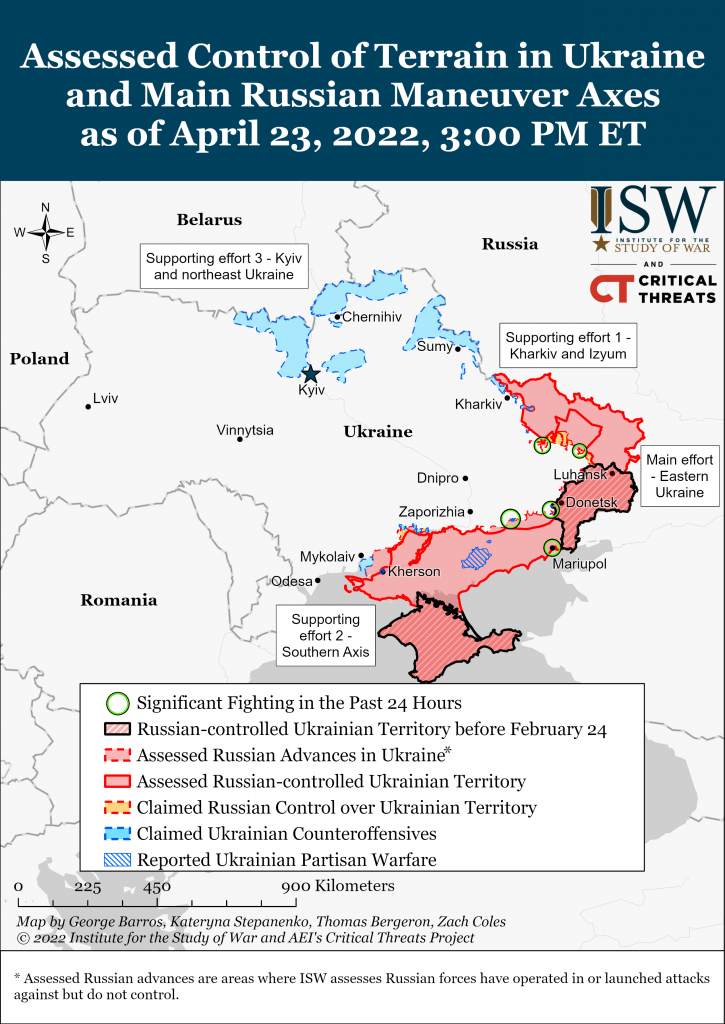 Russian forces continued to attack Ukrainian defenders in the Azovstal Steel Plant and are likely attempting to starve out those remaining within the facility.[2] Advisor to the Head of the Ukrainian President’s Office Oleksiy Arestovych stated that Russian troops tried to storm the plant and “strangle” Ukrainian resistance, though ISW cannot independently verify this claim.[3] Russian forces allegedly organized buses for civilian evacuation from Mariupol but canceled the evacuation on the grounds that Ukrainian ”nationalists” were planning on attacking the civilians.[4] Such actions that spoil the evacuation process likely represent further attempts to shape the information space in Mariupol and globally, as well as to extend administrative control in captured portions of the city.[5] 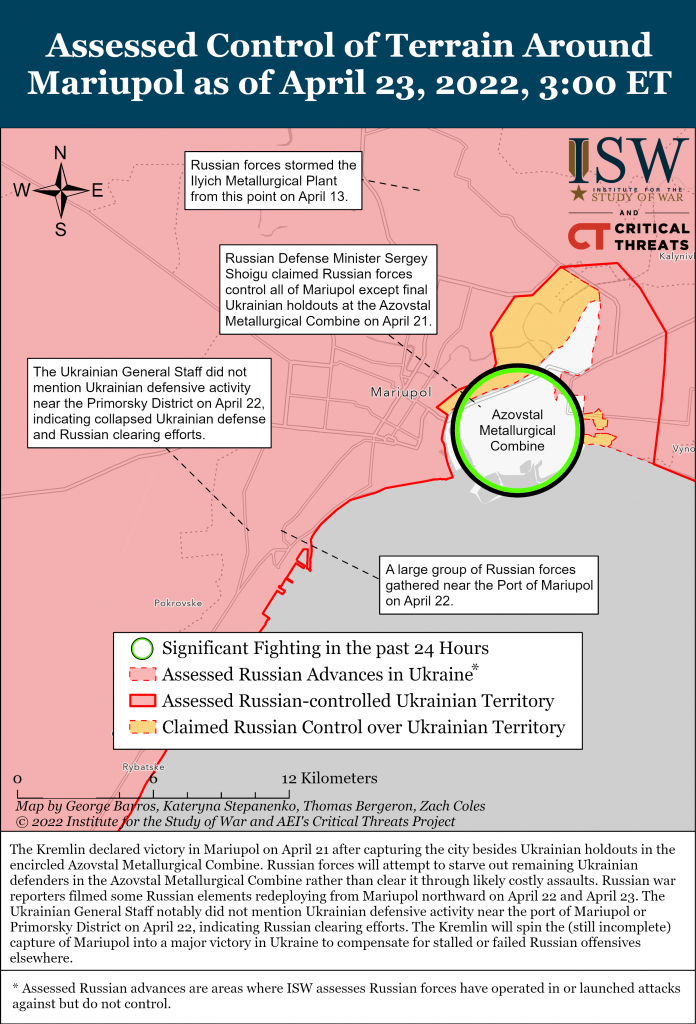 Russian forces conducted limited ground offensives in Rubizhne, Popasna, and Marinka on April 23 but did not make any significant territorial gains.[6] The Ukrainian General Staff said that Russian forces are focusing on preparing to assault Severodonetsk while continuing unsuccessful ground attacks in the direction of Slovyansk and shelling settlements all along the frontline.[7] Social media users and foreign journalists geolocated Russian forces to the northeastern part of Rubizhne, where street fighting continued as of April 23.[8] Russian forces paused offensive operations on Avdiivka, just north of Donetsk City, after consistently targeting the settlement throughout the week. Donetsk People’s Republic (DNR) and Russian units have reportedly been arriving in the vicinity of Donetsk City from Mariupol since April 21, and the Russian command will likely recommit these degraded units to offensives in Donetsk and Luhansk oblasts.[9] 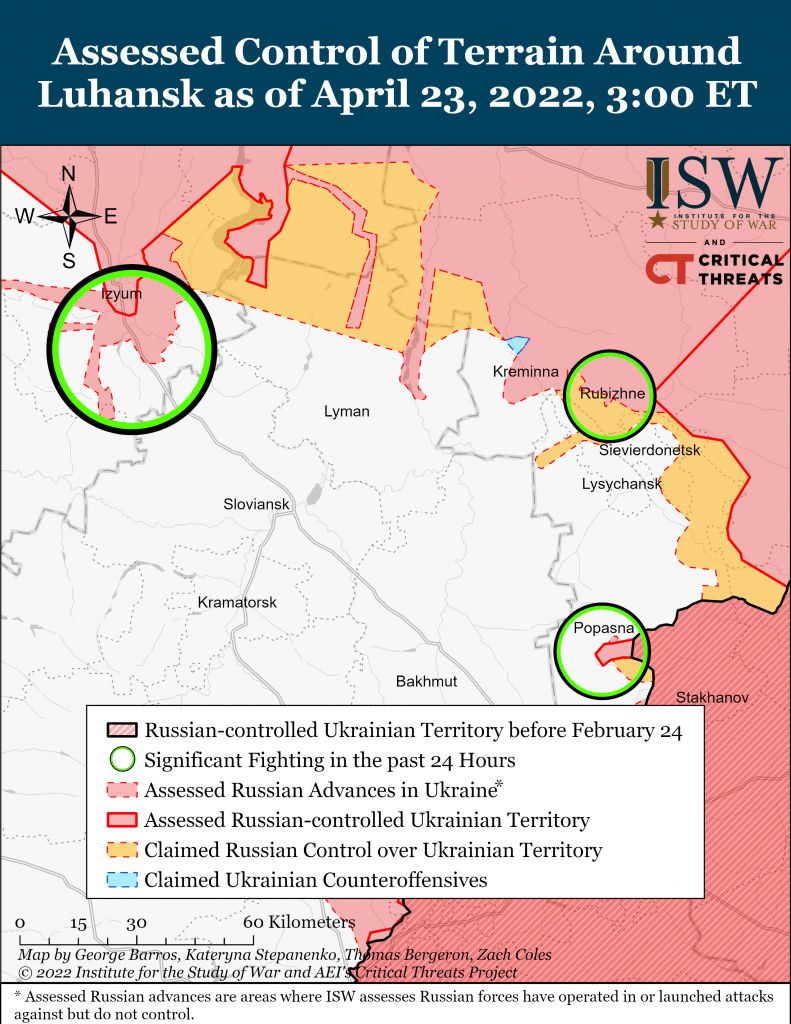 Russian forces maintained their positions northeast of Kharkiv city and continued to shell surrounding areas on April 23.[15] Reports of Russian reinforcements from the Kyiv axis in Kharkiv Oblast likely indicate that Russia intends to maintain pressure on Kharkiv city, contradicting the Russian claim that Moscow’s focus is on securing the borders of Luhansk and Donetsk oblasts. Russian ground lines of communication (GLOCs) do not currently run through or even near Kharkiv city, and the most recent Ukrainian counteroffensives near the city are unlikely to threaten Russian GLOCs from Belgorod to Izyum. 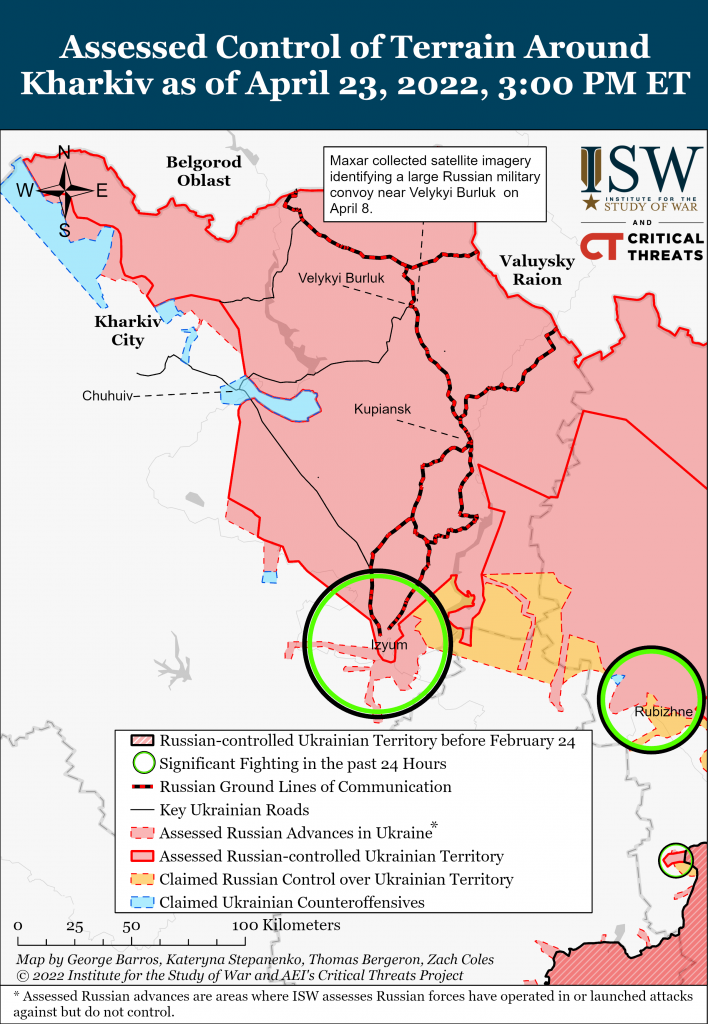 Russian forces continued a limited offensive in Zaporizhia Oblast but paused ground offensive operations in northern Kherson Oblast on April 23.[16] Oleksiy Arestovych, chief advisor to Ukrainian President Volodymyr Zelensky, said that Russian forces advanced several kilometers in the direction of Hulyaipole, Zaporizhia Oblast, likely intending to stop Ukrainian counteroffensives in the area or to secure the N15 highway.[17] The Ukrainian General Staff reported that one Russian BTG from the 19th Motorized Rifle Division of the 58th Combined Arms Army moved in the direction of Zaporizhia. This unit was likely one of three sent to Melitopol early in March and is not likely a fresh unit, although it may have had time to refit and replace losses.[18] Russian forces are reportedly regrouping separate units of the 8th and 49th Combined Arms Armies, the 22nd Army Corps, Black Sea Coastal Troops, and airborne troops to retain occupied frontiers in southern Ukraine.[19]

Ukraine’s Military Intelligence Directorate claimed that Ukrainian forces struck a command post of the 49th Combined Arms Army in an unspecified frontline location in southern Ukraine on April 22, killing at least two generals and destroying the post.[20] ISW cannot independently verify this strike or its casualties. The Ukrainian Resistance Center also reported that an organized resistance movement has killed 100 Russian occupation personnel since the start of the war, including 30 since April 12.[21] Russian forces are attempting to forcibly mobilize residents of temporarily occupied settlements in Kherson and Zaporizhia oblasts, despite growing resistance movements.[22] 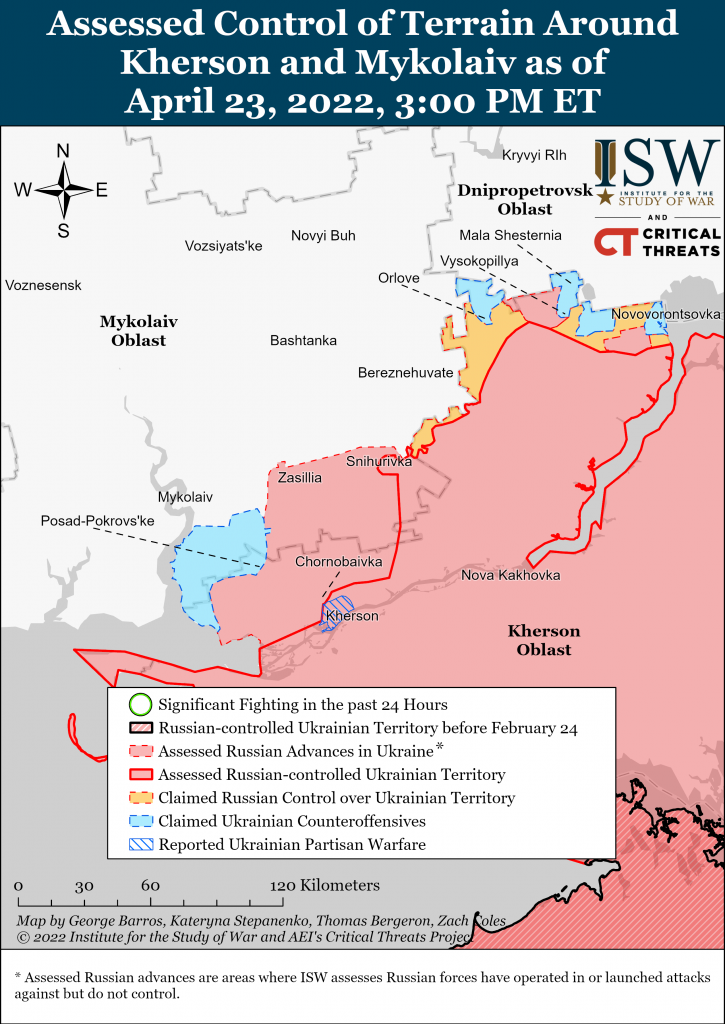