Russian forces made minor advances in the ongoing offensive in eastern Ukraine on April 19, seizing several small towns and advancing into the key frontline towns of Rubizhne and Popasna. Russian forces continued major assaults with heavy air and artillery support but are continuing to build the logistics and command-and-control capabilities necessary for a larger offensive. Russian forces have not achieved any major breakthroughs, nor have they demonstrated any new capability to conduct multiple successful, simultaneous advances. Russian forces additionally made grinding progress against remaining Ukrainian defenders in Mariupol’s Azovstal Steel Works and announced plans for a May 9 Victory Day parade in the city – indicating Russian forces will declare victory in Mariupol by that date at the latest. 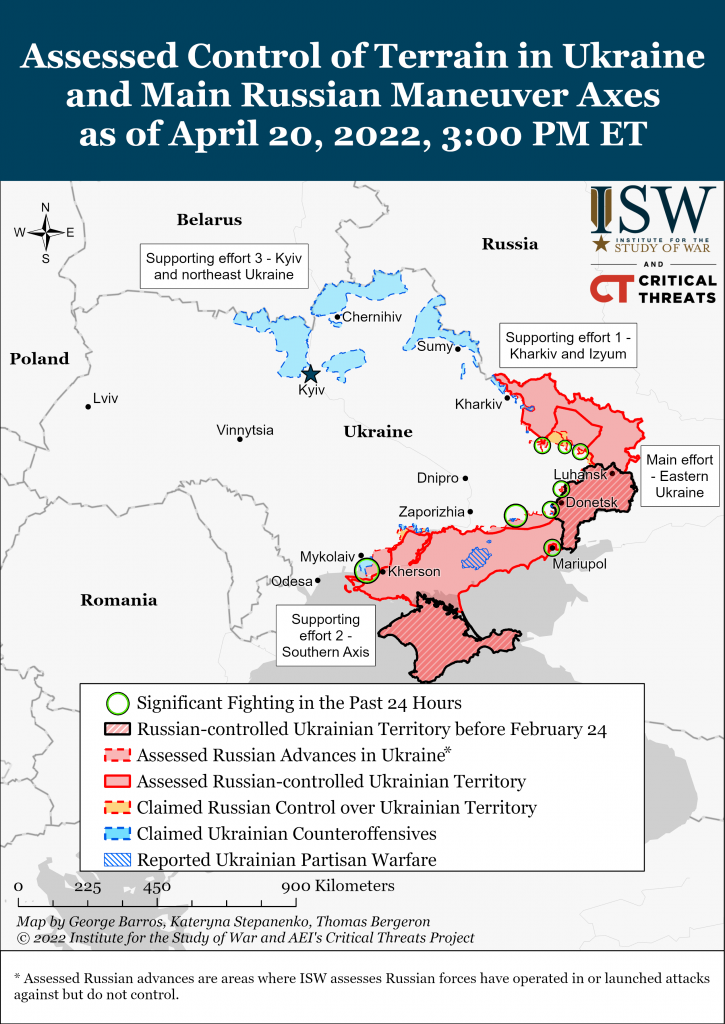 Russian forces may be preparing to conscript Ukrainian citizens amid continuing recruitment challenges. The Ukrainian Main Intelligence Directorate (GUR) reported on April 20 that Russian occupation forces are planning to hold pseudo-referendums in occupied Zaporizhia and Kherson Oblasts to declare a forced mobilization and “throw ‘mobilized’ Ukrainians to the hottest parts of the front.”[1] If confirmed, this effort is highly unlikely to generate meaningful combat power and will provoke an uptick in protests and partisan actions against Russian forces in these regions. The GUR additionally reported that Russia’s FSB is conducting a purge of the political leadership of the LNR in retaliation for its failure to achieve military objectives since February 24.[2] 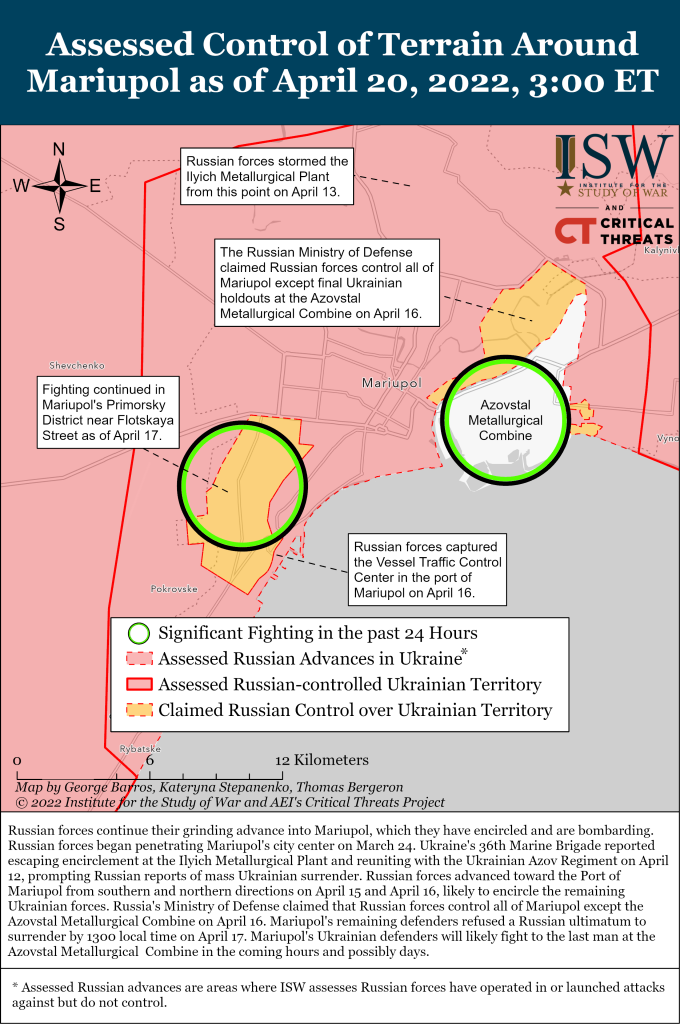 Russian forces made marginal gains in assaults against the Azovstal Steel Plant on April 20.[3] Video footage depicted Russian Naval Infantry and other mechanized units fighting on the outskirts of the plant.[4] Russian aircraft continued to heavily target the Azovstal plant.[5] Pro-Russian Telegram channels claimed that DNR militia and potentially Russian Special Operations forces are "clearing" the Azovstal Plant of Ukrainian sources, but we cannot confirm if Russian forces have been able to take portions of the plant itself.[6] Notably, DNR-appointed occupation authorities of Mariupol announced on April 20 that Russian and DNR forces will hold a ”Victory Day” parade in Mariupol on May 9.[7] Russian forces may undertake hasty and poorly-organized offensive actions to clear Azovstal before this date. 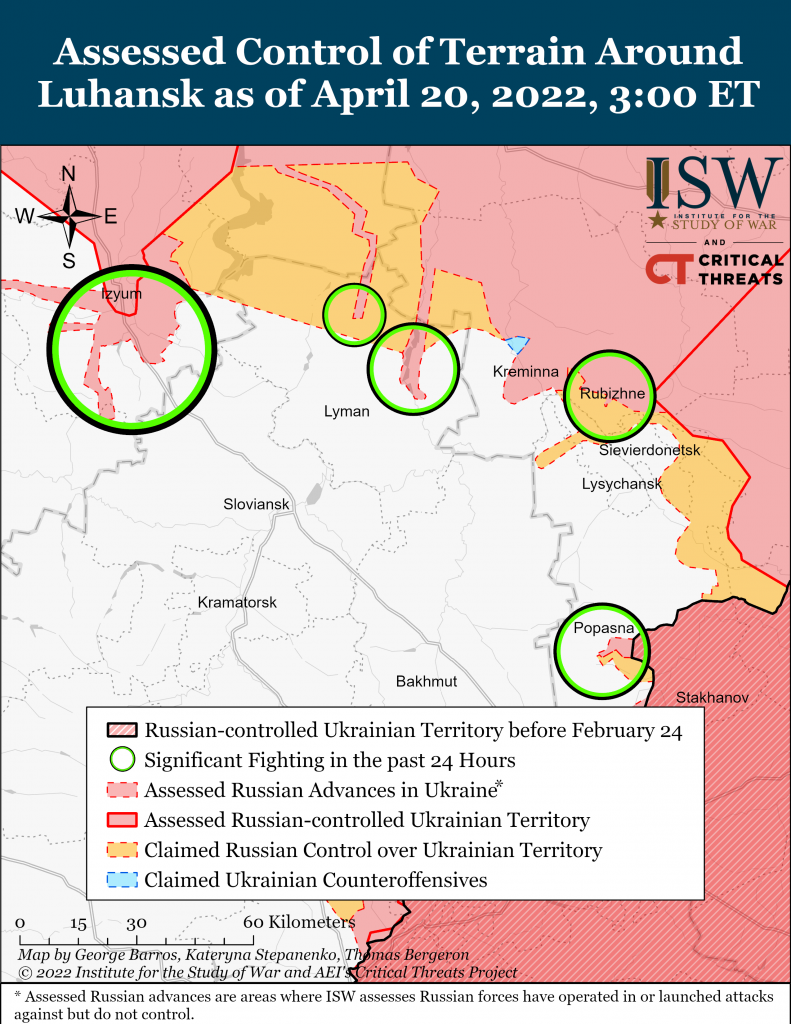 Russian forces continued offensive operations concentrated on Rubizhne, Popasna, and Malinka and likely captured several outlying suburbs of Severodonetsk on April 20.[8] Head of the Chechen Republic Ramzan Kadyrov claimed that Chechen and LNR troops took full control of Rubizhne on April 20, but ISW is unable to independently verify this claim, and the Urkainian General Staff reported Ukrainian forces remained in control of Rubizhne an hour before Kadyrov’s claim.[9] The Ukrainian General Staff reported on April 20 that Russian forces are actively fighting in Torske and Zelena Dolyna, two towns west of Russian positions in Rubizhne.[10] Pro-Russian sources additionally claimed that Russian forces took control of Kreminna and Stara Krasyanka, west of Rubizhne, on April 20.[11]

Russian forces continued attempts to advance into Popasna and reportedly captured residential sectors of the city.[12] A Ukrainian officer and military blogger posted images of what he claimed to be dead Libyan mercenaries in Popasna on April 20, and Secretary of the Ukrainian National Security and Defense Council Oleksiy Danilov reported that Ukrainian forces killed 20-25 ”Libyan and Syrian mercenaries” in Popasna.[13] Danilov stated he thinks Russia has deployed only 300-500 Syrian and Libyan mercenaries to the frontline. ISW has not observed any deployments of cohesive units of Syrian or Libyan fighters, and these recruits are likely individual fighters operating under the umbrella of the Wagner Group. Russian forces additionally conducted unsuccessful attacks north towards Temirivka and Hulyaipole on April 20, likely attempting to begin an encirclement of Ukrainian forces near Donetsk city.[14] 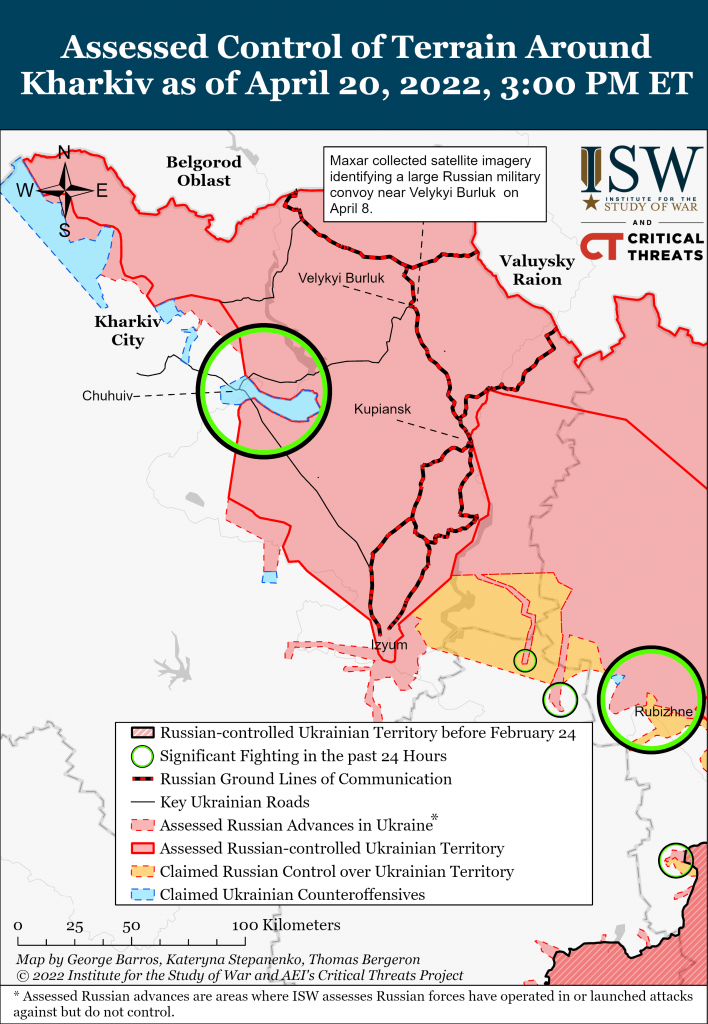 Russian forces continued to shell areas of Kharkiv Oblast and partially block Kharkiv city on April 20.[17] The Ukrainian General Staff stated that Russian forces mounted attacks south and southwest of Izyum with ”partial success,” indicating localized advances.[18] Russian forces are continuing to take losses over the course of such attempted offensives in Kharkiv Oblast, and the Ukrainian General Staff reported that a battalion tactical group (BTG) of the 237th Tank Regiment of the 3rd Motorized Rifle Division withdrew from Kharkiv Oblast back to its permanent deployment point in Belgorod, Russia due to heavy combat losses.[19] 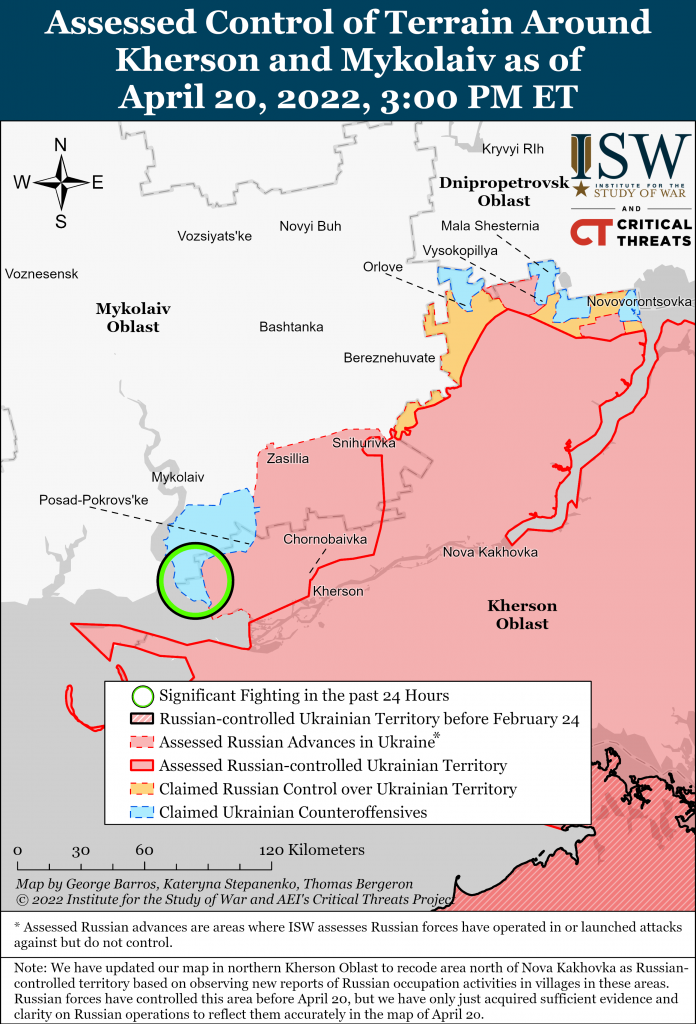