Russian forces began a new phase of large-scale offensive operations in eastern Ukraine on April 18 likely intended to capture the entirety of Donetsk and Luhansk oblasts. Russian forces have been concentrating reinforcements—including both newly-deployed units and damaged units withdrawn from northeastern Ukraine—to the Donbas axis for several weeks. Russian forces conducted large-scale assaults focused on Rubizhne, Popasna, and Marinka with heavy artillery support on April 18 after previously conducting only localized attacks and shelling along the line of contact. Russian forces have not secured any major territorial gains as of publication.

The Russian offensive in the east is unlikely to be dramatically more successful than previous Russian offensives, but Russian forces may be able to wear down Ukrainian defenders or achieve limited gains. Russian forces did not take the operational pause that was likely necessary to reconstitute and properly integrate damaged units withdrawn from northeastern Ukraine into operations in eastern Ukraine. As we have assessed previously, Russian forces withdrawn from around Kyiv and going back to fight in Donbas have, at best, been patched up and filled out with soldiers from other damaged units, and the Russian military has few, if any, cohesive units not previously deployed to Ukraine to funnel into new operations.[1] Frequent reports of disastrously low Russian morale and continuing logistics challenges indicate the effective combat power of Russian units in eastern Ukraine is a fraction of their on-paper strength in numbers of battalion tactical groups (BTGs). Russian forces may certainly be able to wear down Ukrainian positions in eastern Ukraine through the heavy concentration of firepower and sheer weight of numbers, but likely at a high cost. A sudden and dramatic Russian offensive success remains highly unlikely, however, and Ukrainian tactical losses would not spell the end of the campaign in eastern Ukraine, much less the war as a whole. 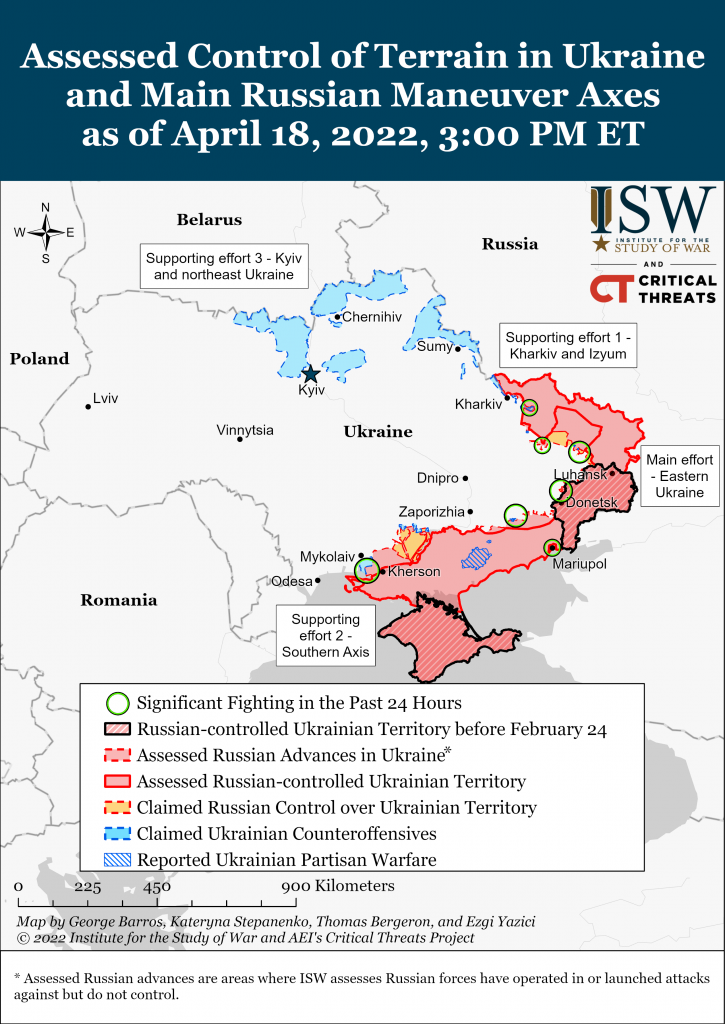 Russian authorities face mounting unwillingness to fight among both conscript and contract personnel. The Ukrainian General Staff reported on April 18 that Russian forces began efforts to form additional units in Rostov and Crimea by April 24 to form a “second echelon” to occupy administrative buildings and important infrastructure in occupied Ukraine.[2] Ukraine’s Main Military Intelligence Directorate (GUR) reported on April 18 that the number of Russian personnel refusing to join the war effort is increasing, including 60-70% of contract soldiers in the 150th Motor Rifle Division of the 8th Combined Arms Army—the primary Russian combat force in eastern Ukraine.[3] The GUR stated that Russian authorities are threatening the families of servicemen who refuse to fight and making permanent marks in the criminal records of those servicemen.

Russian cruise missiles struck a Ukrainian vehicle repair shop in Lviv, western Ukraine, killing civilians in Lviv for the first time in the war. Social media users depicted several missiles striking a warehouse and railway junction in Lviv and killing several civilians on April 18.[4] The Russian Ministry of Defense claimed that Russian forces destroyed a logistics center in Lviv used to store weapons arriving in Ukraine from the United States and European Union on April 18.[5] Russian forces seek to disrupt western aid shipments to the Ukrainian military but likely lack large numbers of the precision weapons needed to frequently strike these targets in western Ukraine. 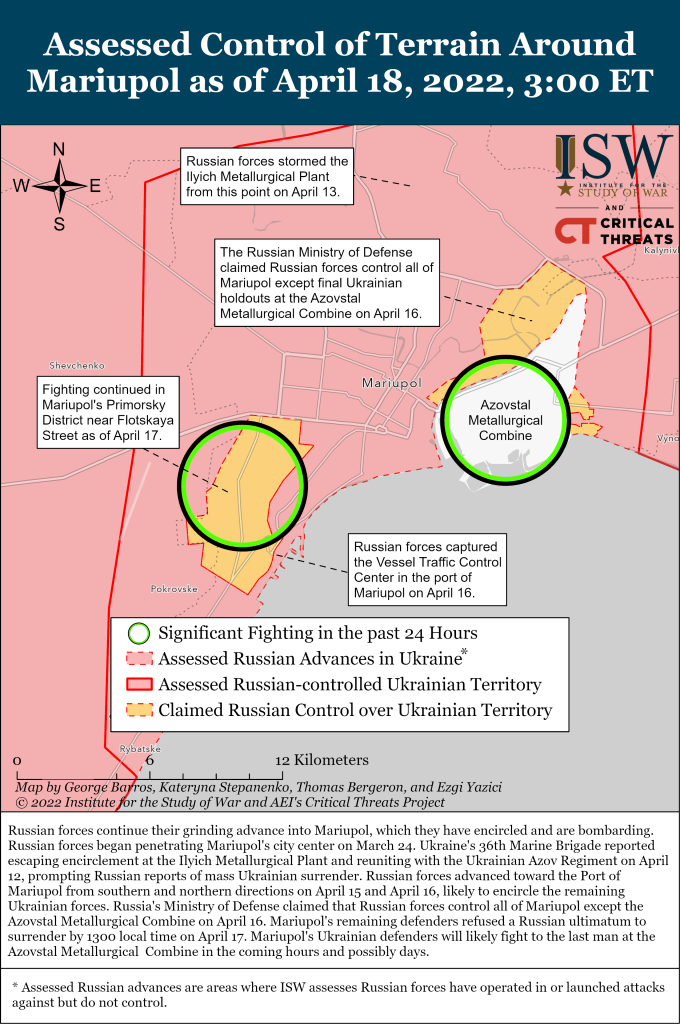 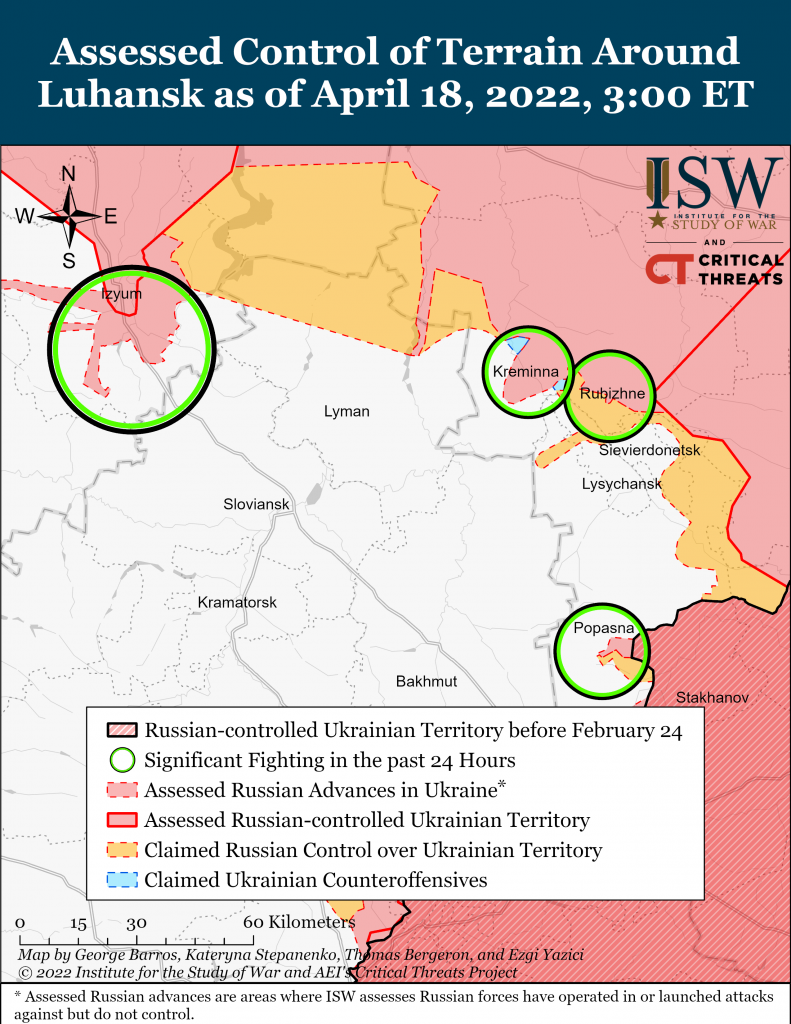 This Ukrainian offensive will likely force Russian forces to divert some of the combat power intended for the stalled Izyum axis to defend against Ukrainian advances but is unlikely to threaten the Russian ground line of communication (GLOC) to Izyum in the coming days. Ukrainian forces already controlled elements of the M03 highway, preventing direct Russian movement from the outskirts of Kharkiv to Izyum. ISW has documented Russian forces, including a major Russian convoy observed by Maxar Technologies on April 8, deploying to Izyum using a GLOC extending from the main Russian logistics and communications center in Belgorod, Russia, directly southeast into Ukraine through Velykyi Burluk and Kupyansk before reaching frontline positions in Izyum.[19] Ukrainian counterattacks would need to capture and hold Velykyi Burluk, approximately 45km from their current forward positions in Bazaliivka, to disrupt this GLOC. Ukrainian forces may be able to conduct such an advance over several days or weeks, but Russian forces east of Kharkiv are unlikely to collapse as quickly as Russian forces did during the final withdrawal from Kyiv and northeastern Ukraine.

Russian forces additionally have a secondary GLOC from Valuyki, Russia, directly south through Kupyansk to Izyum. The Ukrainian General Staff reported on April 6 that Russian forces began using the Valuyki-Kupyansk railway to reinforce Izyum, and several Russian units fighting in Izyum (including the 252nd Motor Rifle Regiment, 752nd Motor Rifle Regiment, and 237th Tank Regiment) are permanently based directly in or near Valuyki.[20] Russian forces will be able to use this GLOC to reinforce operations around Izyum even if Ukrainian forces prove capable of capturing Velykyi Burluk in the coming days. The Ukrainian counterattack may successfully force Russian forces to redeploy some units intended for the Izyum axis but is unlikely to completely disrupt Russian lines of communication and reinforcement in the coming week. 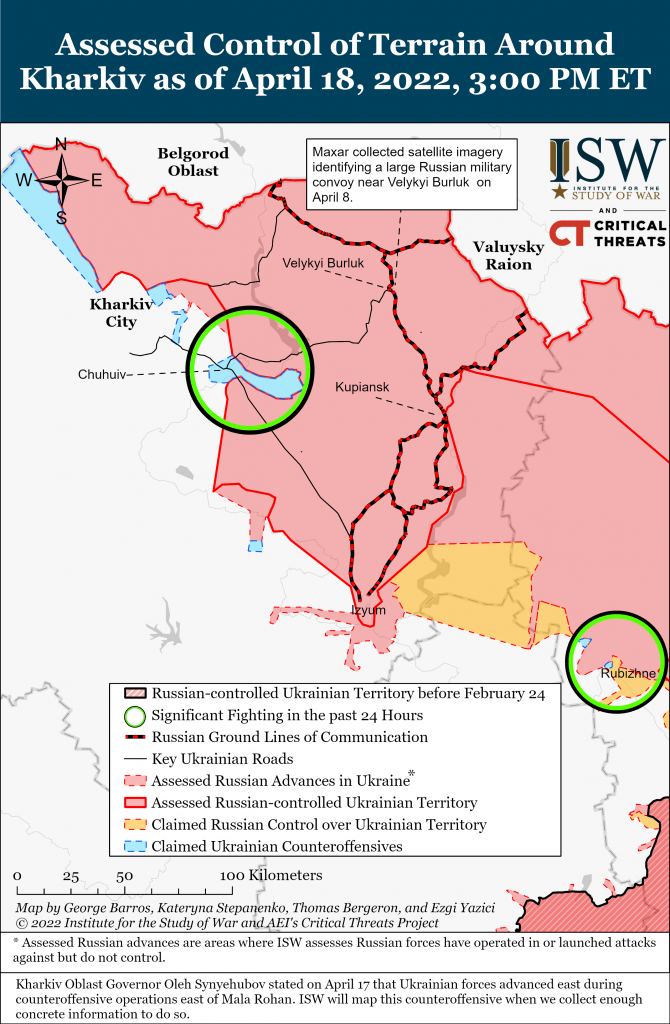 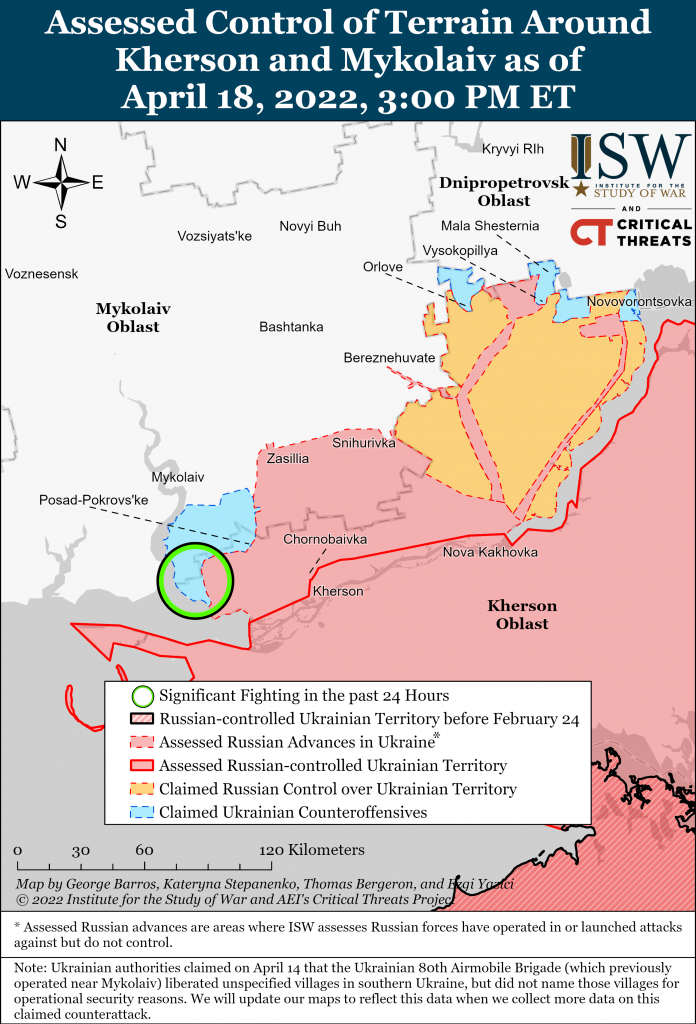