University and high school students have begun largely leading the ongoing protest movement in Iran—at least for the moment. Anti-regime protests occurred in at least 17 cities in 14 provinces on October 4, primarily around universities and high schools. Students expressed frustration with the regime and Supreme Leader Ali Khamenei.

The student protesters are a generation younger than the youth who played a prominent role in the Green Movement in 2009, during which Iranians took to the streets to protest the fraud-plagued reelection of then-President Mahmoud Ahmadinejad. These protests will likely influence this younger generation’s formative years in a fashion similar to the way the Green Movement affected the Iranian youth at the time. It will be interesting to observe how the experiences in those earlier demonstrations of the parents of young people protesting today shape both generations.

It is unclear how long the university and high school students will sustain their protests. The regime may not use the same brutality and force that it has previously used throughout the crackdown against young people. The continuation of the student demonstrations could afford the other segments of the protest movement time to rest before returning to the streets, however. 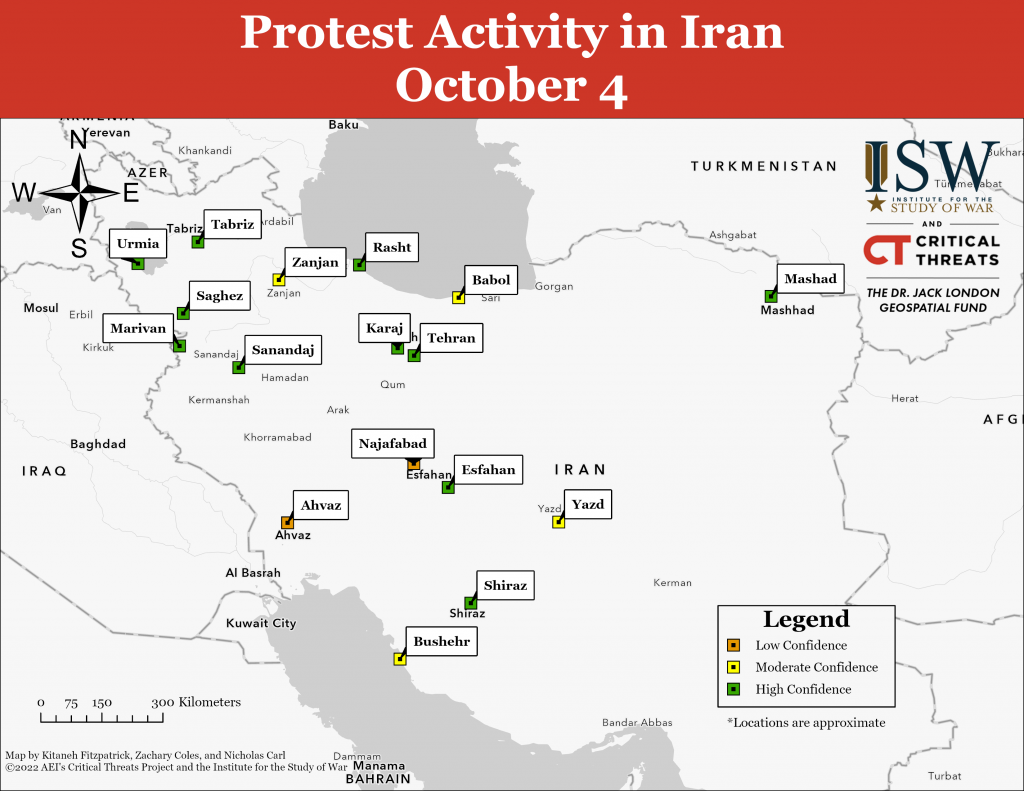 These individuals all accused the US and Israel of coopting and stoking the protests against the regime—in line with Khamenei’s remarks from October 3. They framed the protesters as rioters and seditionists. Bagheri, Vahidi, and Amoli Larijani praised the state security services and framed them as heroes and victims of the protests. All these officials expressed little to no sympathy for the protesters and their grievances—a departure from the somewhat more conciliatory tone that Bagheri and IRGC Commander Major General Hossein Salami have been using.

Anti-regime militant group Jaish al Adl vowed to retaliate against the regime for killing protesters in Sistan and Baluchistan Province. The group stated on October 1 that it will “enter the field with all its power to hold the regime accountable.”  The group also denied its involvement in the deadly clashes between protests and regime security forces in Zahedan on September 30. Jaish al Adl operates around the Iran-Pakistan border region and regularly conducts attacks against regime security forces.

President Joe Biden issued a statement condemning the regime crackdown and expressing support for the protesters.[4] Biden stated that the US is “making it easier for Iranians to access the Internet, including through facilitating greater access to secure, outside platforms and services.” Biden also stated that the US will impose “further costs.”

The IRGC continued attacking anti-regime Kurdish militant positions in Iraqi Kurdistan for the ninth consecutive day. The IRGC attacked a village near Sidekan, Soran District, Erbil Province.[5] The IRGC attacked the village with a Mohajer-6 drone, which is capable of carrying glide bombs and anti-armor guided munitions.[6] IRGC attacks targeting Sidekan have not included drones since September 26.