Some marginalized segments of the reformist faction are continuing to criticize the regime crackdown. The reformist son of former President Ali Akbar Hashemi Rafsanjani suggested amending the constitution to address popular grievances on October 22.[3] Reformist politician Abbas Ahmad Akhoundi called on the Iranian clerical establishment to publicly support the protesters and condemn crackdowns on October 22.[4] Akhoundi was a senior cabinet official under both Rafsanjani and former President Hassan Rouhani.[5] Akhoundi’s comments follow unconfirmed reports of rifts between the regime and some members of its clerical establishment as CTP previously reported.[6] Persian-language media outlet Zeitoon published a statement allegedly from students and teachers at the Tehran, Mashhad, and Qom seminaries on September 30, condemning Khamenei and the regime crackdown on the protests.[7] Other senior clerics such as Ayatollah Mustafa Mohaghegh Damad, Ayatollah Asadollah Bayat Zanjani issued statements on criticizing state security services for the death of Mahsa Amini on September 17.[8] One of Iran’s most senior Sunni clerics—Maulvi Abdol Hamid—similarly criticized the regime on October 21 for its brutal suppression of protests in Zahedan on September 30.[9] 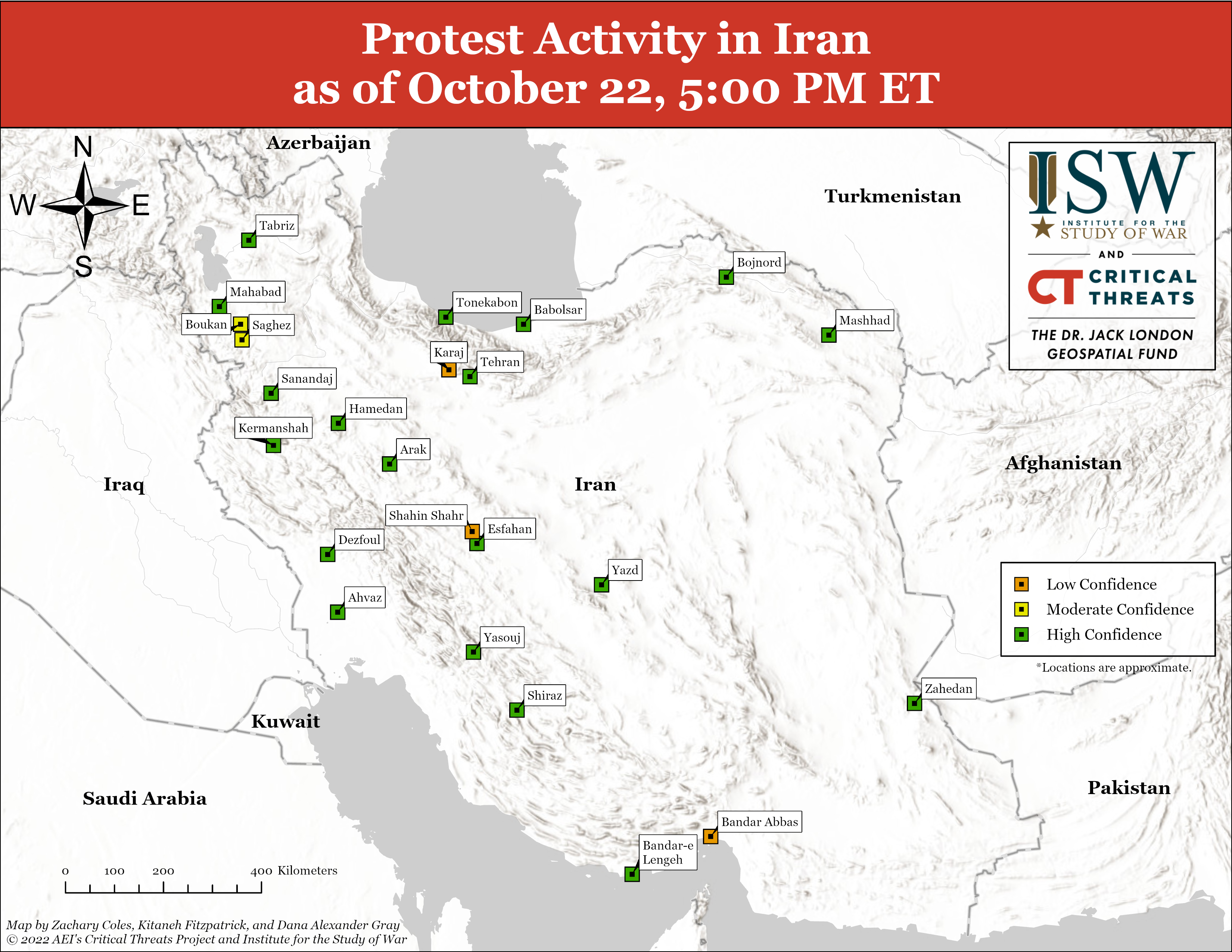 Black Reward first announced a series of cyberattacks against regime institutions and media outlets after emerging online on September 25.[36] The group claims to belong to a larger Iranian hacker community that intends to destroy the “clerical criminal regime for women, life, [and] freedom.”[37]

Social media users documented anti-regime strikes among merchants and workers in 10 cities in seven provinces on October 22, including:

The Islamic Revolutionary Guards Corps (IRGC) and regime media channels claimed a new separatist movement has formed in Azerbaijan’s autonomous Nakhchivan region. IRGC Telegram channels and regime-affiliated Sahar Azeri TV reported the emergence of a separatist movement that intends to return Nakhchivan to Iran.[48] IRGC Telegram channels posted the videos with a message that warned those “who think they can play with the national security of others should be aware that many hearts in the region are with Iran.”[49] These announcements may be part of the Iranian effort to threaten Azerbaijan. The IRGC conducted a three-day military exercise along the Iran-Azerbaijan border from October 17-19, as CTP previously reported, threatening to attack Azerbaijan in part for allegedly hosting Israeli intelligence agents[50] An open-source analyst claimed to geolocate an image from the exercises to a section of the Aras River that divides Iran from Nakhchivan[51]