The regime’s use of extreme violence against protesters in Sistan and Baluchistan Province is likely entrenching long-term frustration against the political establishment there. One of Iran’s most senior Sunni clerics—Maulvi Abdol Hamid—criticized the regime on October 21 for its brutal suppression of protests in Zahedan on September 30.[i] Abdol Hamid stated that Supreme Leader Ali Khamenei was responsible for the crackdown, which may have killed over 90 protesters.[ii] Hamid is the Sunni Friday prayer leader in Zahedan. Large-scale protests erupted in Zahedan on October 21 in part to commemorate the three-week anniversary of the crackdown.[iii] Salafi jihadi militant group Jaish al Adl published a video on October 20, expressing support for the protesters and threatening to attack the regime, as CTP previously reported.[iv]  There is no evidence to suggest that Jaish al Adl was involved in the October 21 protests. 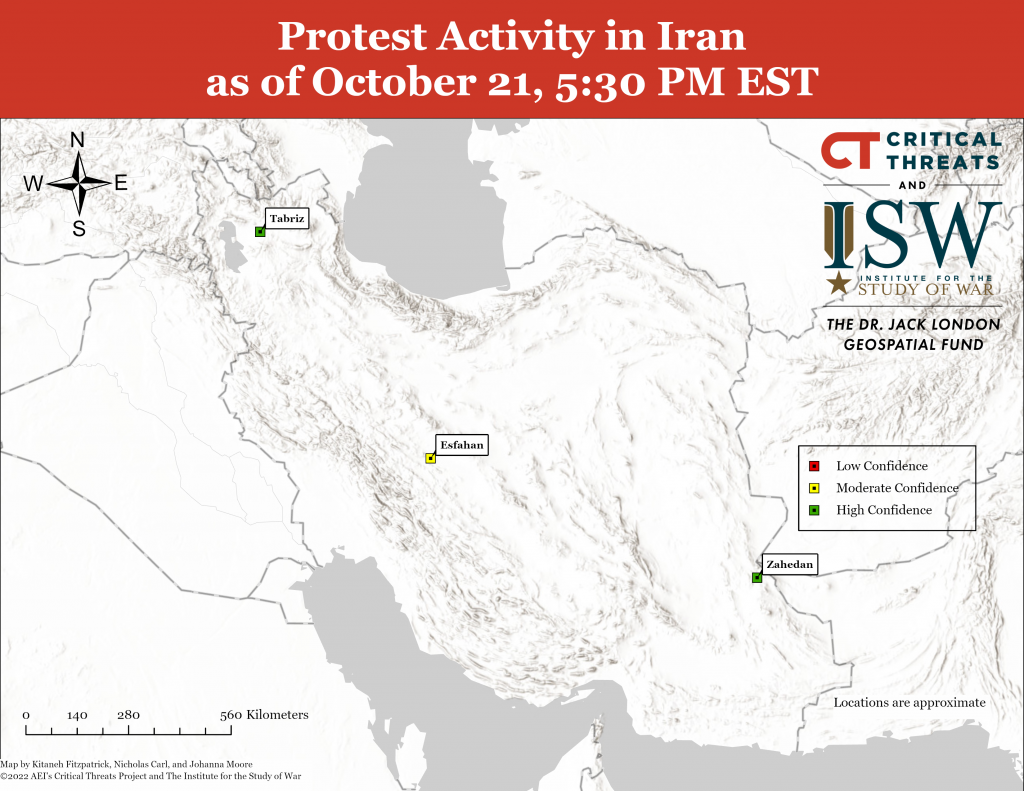 Unknown hackers claimed to have hacked the Atomic Energy Organization of Iran on October 21.[viii] The hackers stated that they will release sensitive information about the Iranian nuclear program if the regime does not release all political prisoners arrested in the recent protests by October 22.

Iranian political partners and proxies are trying to capture key Iraqi security institutions as Prime Minister-designate Mohammad Shia al Sudani assembles his cabinet. The Shia Coordination Framework—the umbrella coalition for Iranian-backed parties in Iraq—called for the exemption of the usually Sunni-controlled Defense Ministry and usually Iranian proxy-controlled Interior Ministry from Iraq’s traditional ethno-sectarian quota system for determining cabinet appointments.[ix] Iran-aligned parties are likely trying install one of their members to control these ministries under the next government.

Iran’s Iraqi proxies have seemingly entered a negotiation with one another to divide the spoils of their successful designation of a preferred Iraqi prime ministerial candidate. Iranian proxy Asaib Ahl al Haq (AAH) offered to forgo its share of ministerial posts in exchange for controlling the Iraqi National Security Service (INSS) and Iraqi National Intelligence Service (INIS).[x] The INIS is largely not infiltrated by Iranian proxies following the tenure of current Prime Minister Mustafa al Kadhimi, who has run the agency since 2016. Another Iranian proxy, Kataib Hezbollah, reportedly rejected AAH’s proposal and demanded that it control the INIS.[xi] Kadhimi attempted to limit Iranian influence in several Iraqi security institutions during his tenure as prime minister, angering Iran’s Iraqi proxies.[xii] Sudani could allow Iranian proxies to reassert and increase Iranian and proxy influence over these sensitive security agencies in exchange for their support in forming his government.