Supreme Leader Ali Khamenei’s refusal to concede on the mandatory hijab law is likely driving fissures among the political elite. Retired Islamic Revolutionary Guards Corps (IRGC) general Hossein Alaei expressed sympathy for some protester grievances and suggested abolishing the morality patrol on October 18.[i] Alaei’s statement follows several moderate and reformist politicians taking similarly sympathetic positions in recent days. Three reformists separately proposed reforms to address public frustrations on October 17, as CTP previously reported.[ii] Former Parliament Speaker Ali Larijani stated that the Law Enforcement Command (LEC) and Basij Organization should not be responsible for enforcing the mandatory hijab law on October 12.[iii] Khamenei has shown no indication that he will remove the hijab requirement or offer a similar concession to the people and has instead taken a hard line toward the protests in his recent speeches.[iv] Khamenei has thus taken a position that some members of the regime--even the most ideological--may not be willing to defend.

Alaei previously published a letter in 2012 criticizing the regime and Khamenei for repressing the 2009 Green Movement.[v] Senior IRGC commanders responded at the time, condemning Alaei and visiting his home to discuss the letter.[vi] The IRGC leadership seemingly convinced Alaei to stop criticizing the regime and Khamenei publicly, but his latest remarks indicate that he is again breaking from the political and security establishments.

The ongoing crackdown demonstrates how heavily the regime has begun using advanced and emerging technologies to impose social control. The Wall Street Journal reported on October 18 that the regime is using drones to surveil protests and public cameras and food-delivery services to track and identify protesters.[vii] Iranian leaders have built an increasingly adaptive and sophisticated police and surveillance state in recent years to secure their hold on power.[viii] They have observed how technology can secure other autocratic governments, looking to China as a model, and seek to emulate it.[ix] The regime is accordingly developing technologies such as artificial intelligence, facial recognition, and their national intranet to identify and monitor dissidents and assert greater control over the information space.[x]  The regime’s years-long efforts to create these capabilities have shown remarkable limitations in the face of the current protest wave—something these capabilities were explicitly and clearly intended to prevent. 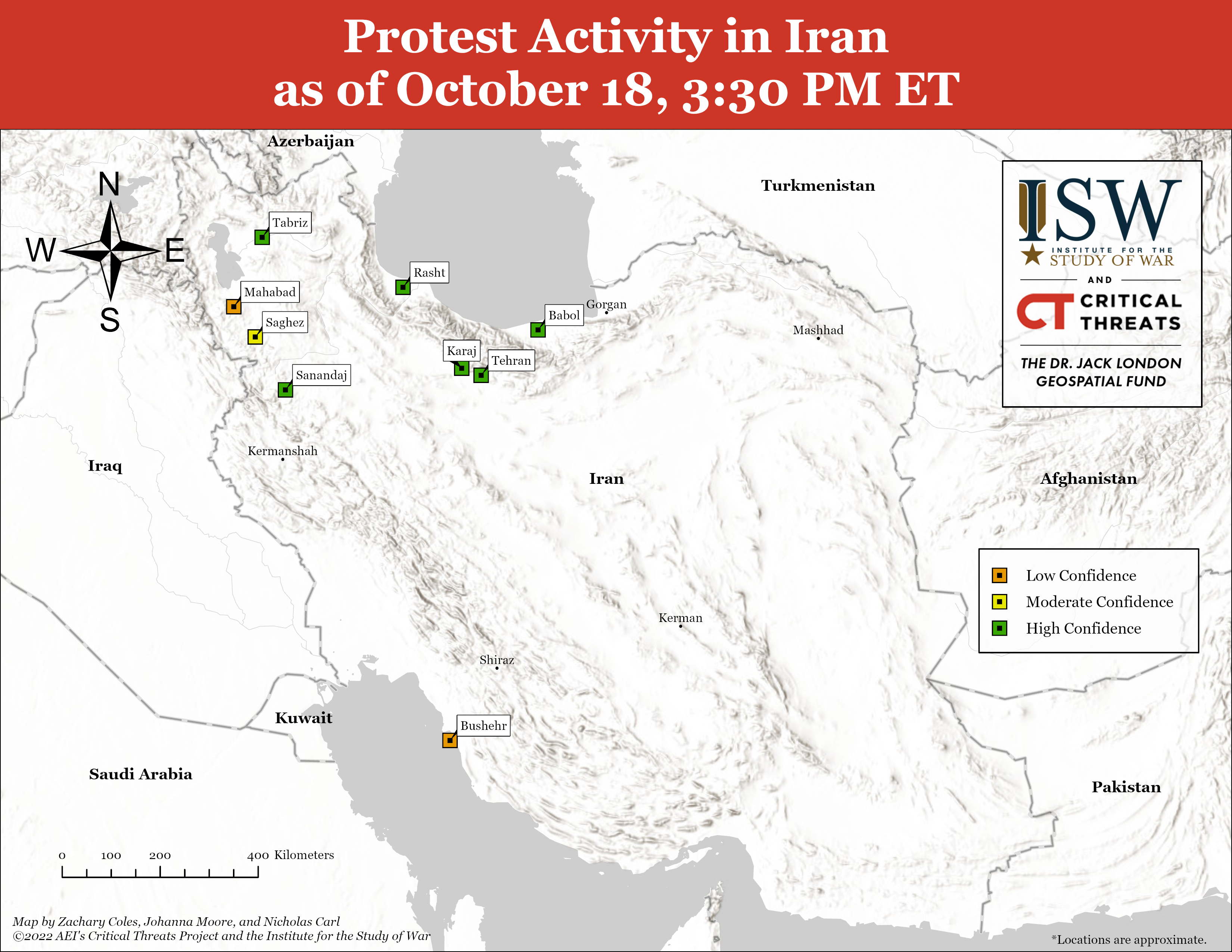 A Persian-language Telegram account posted instructions for protesters on how to use handguns.[xxv] Other accounts have claimed that protesters have taken handguns from security officers.[xxvi]

Persian-language social media account Shirin tweeted a revised version of its political manifesto—named the “Charter of Iran”—on October 18.[xxvii] Shirin stated that it updated the document based on feedback on the initial draft it published on October 14. Shirin reaffirmed its desire to establish a democratic, secular Iranian republic and commitment to civil liberties and women’s rights in the new draft. Shirin called for referendums on whether to maintain the Islamic Republic and what should replace it. The group also proposed establishing a two-year transitional council and reiterated its readiness to welcome willing members of the current regime. Shirin changed its initial proposal of integrating the IRGC into the Artesh and instead called for creating a new professional military. Shirin stated in a separate tweet that it is not affiliated with any political organization.[xxviii] It added that “most” of its members are in Iran.