A major fire broke out at the Evin prison in Tehran on October 15, and the regime used live rounds and tear gas against prisoners and nearby protestors. Iranian state media made the unsubstantiated claim that inmates started the fire.[1] Regime security forces used violence against prisoners and nearby protesters during the fire.[2] Persian-language social media accounts reported that security forces have blocked roads to the prison and fired live rounds and tear gas.[3] Social media users and western media outlets reported explosions and gunshots around Evin Prison.[4]

The regime uses Evin Prison to hold political prisoners and individuals detained on security-related charges, among others.[5] Prison guards and security officials harshly abuse and mistreat inmates there.[6] The judiciary manages the prison, but the Intelligence and Security Ministry and IRGC Intelligence Organization control some parts of the facility as well.[7] The regime holds several dual nationals at Evin Prison, including US-Iranian citizens Siamak Namazi and Emad Shargi.[8]

Social media users have suggested without substantiation that the regime intentionally started the fire, possibly to justify the killing of arrested protesters at the prison.[9] Yasser Hashemi Rafsanjani—the son of late President Ali Akbar Hashemi Rafsanjani—claimed that Iranian authorities advised his brother not to return to Evin Prison on October 15 when his brother was scheduled to return from a furlough.[10] CTP cannot validate these rumors. 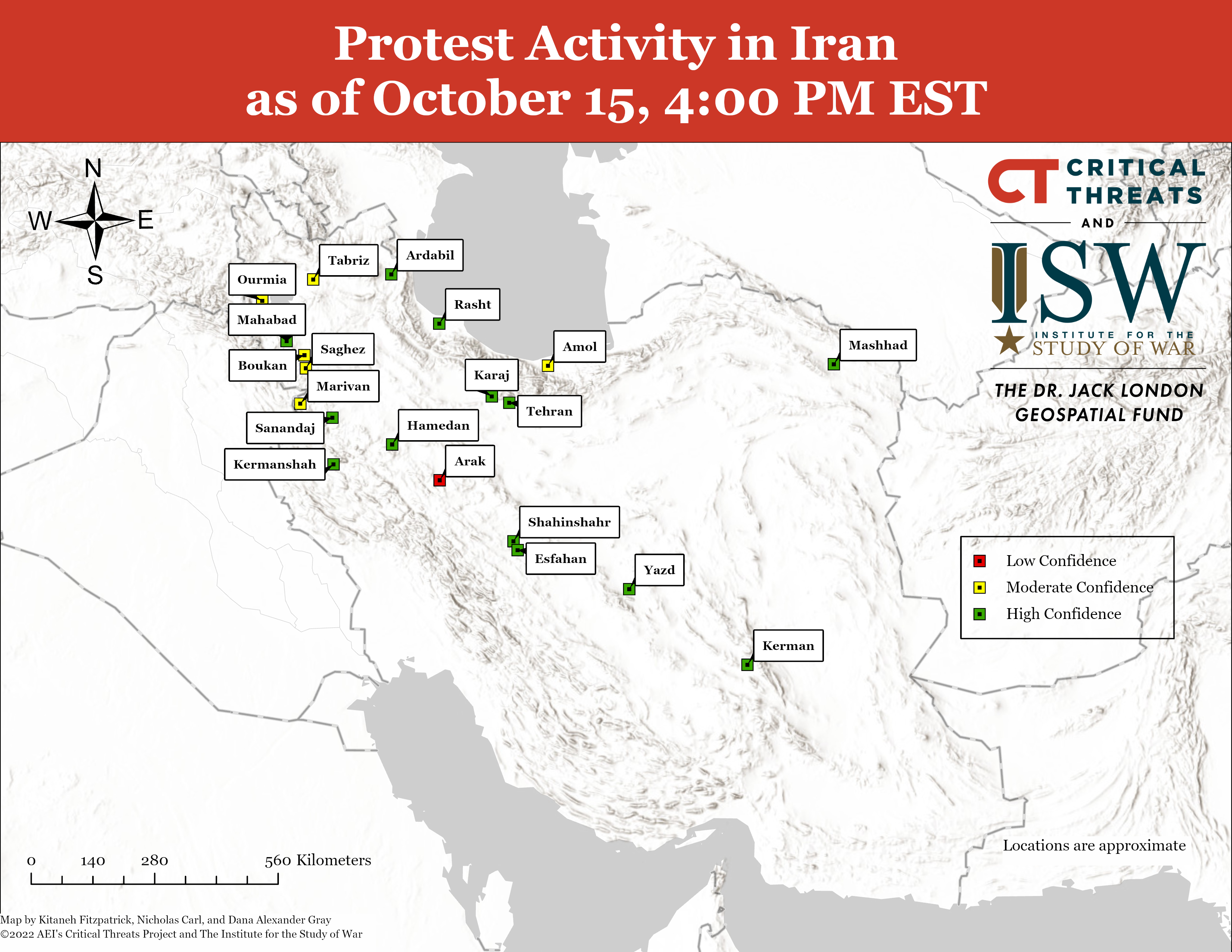 A Persian-language social media account tweeted a political manifesto on October 14, calling for a peaceful transition to establish a democratic, secular Iranian government.[12] The anonymous authors proposed establishing a transitional government that would provide amnesty to arrested protesters, investigate the regime crackdown, integrate the IRGC into the Artesh, resolve the nuclear negotiations, and improve the economy. The authors expressed support for the protests and emphasized the importance of women’s rights, preserving Iran’s territorial integrity, and promoting the freedoms of assembly, association, press, and privacy. The authors welcomed the participation of current regime members and stated that they reserve the right of legitimate defense against repression. A journalist from the Independent tweeted without details or substantiation that male and female political activists in Tehran drafted the statement.[13]

State-aligned media outlets are propagating divergent—and often contradictory--narratives of the regime's response to ongoing unrest. IRGC-affiliated Tasnim News Agency denied reports that Iranian security forces killed a high school girl in Ardabil City and even claimed that there had been no protest- related deaths or injuries in Ardabil Province.[14] Some state-aligned outlets, including Tasnim, later circulated purported footage from the deceased student’s uncle, who claimed that the student had died from heart disease.[15] The footage implicitly suggests that a high school did indeed die, contradicting Tasnim’s initial story. State-affiliated outlets had similarly discordant coverage of the fire and reported violence at Evin Prison, Tehran City. IRGC-affiliated Fars News Agency reported clashes between prisoners and security personnel while other outlets claimed that clashes were limited to being between prisoners.[16]

A prominent Iranian cleric and reporter diverged from the regime’s official narrative downplaying ongoing protests. A senior cleric in Sistan and Baluchistan Province—where the regime has pursued particularly violent protest suppression tactics--defended protestors and criticized some clerics’ comments blaming anti-regime demonstrations on the economy.[17] A reformist outlet similarly circulated an interview from a prominent Iranian journalist criticizing the regime that same day.[18]

The Law Enforcement Command reportedly issued a complaint over four parliamentarians’ views on Mahsa Amini’s death and the morality police, which could also signal broader disagreements about protest responses within the regime.[19]

President Joe Biden reiterated his support for the Iranian protesters on October 14.[20] Biden called on the regime to end its crackdown.

IRGC-affiliated Telegram channels reported that unidentified militants fired six rockets at the al Omar oilfield, which houses US servicemembers, in eastern Syria.[21] CTP cannot verify this reporting. US CENTCOM has not confirmed the attack occurred. IRGC-affiliated Telegram accounts often claim false attacks on US positions. The IRGC may have ordered its proxies to attack the oilfield if the reporting is true to retaliate for the perceived US role in stoking the protests.